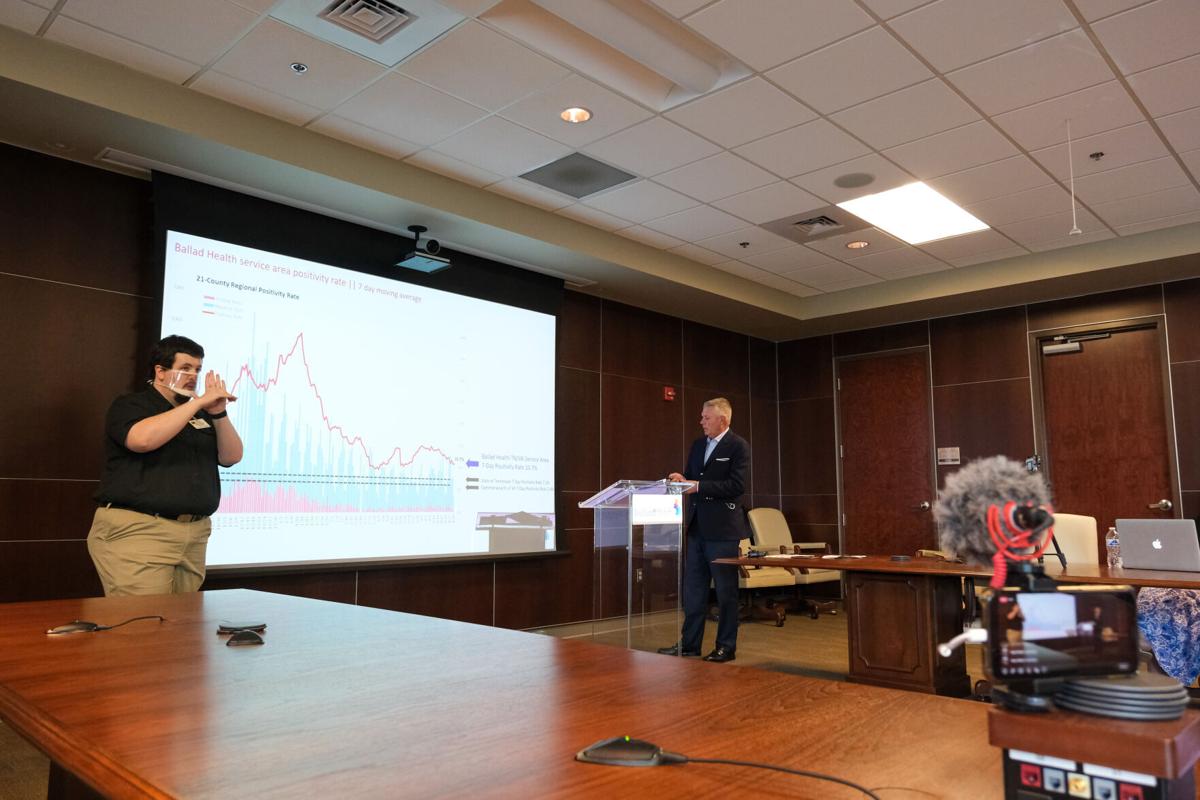 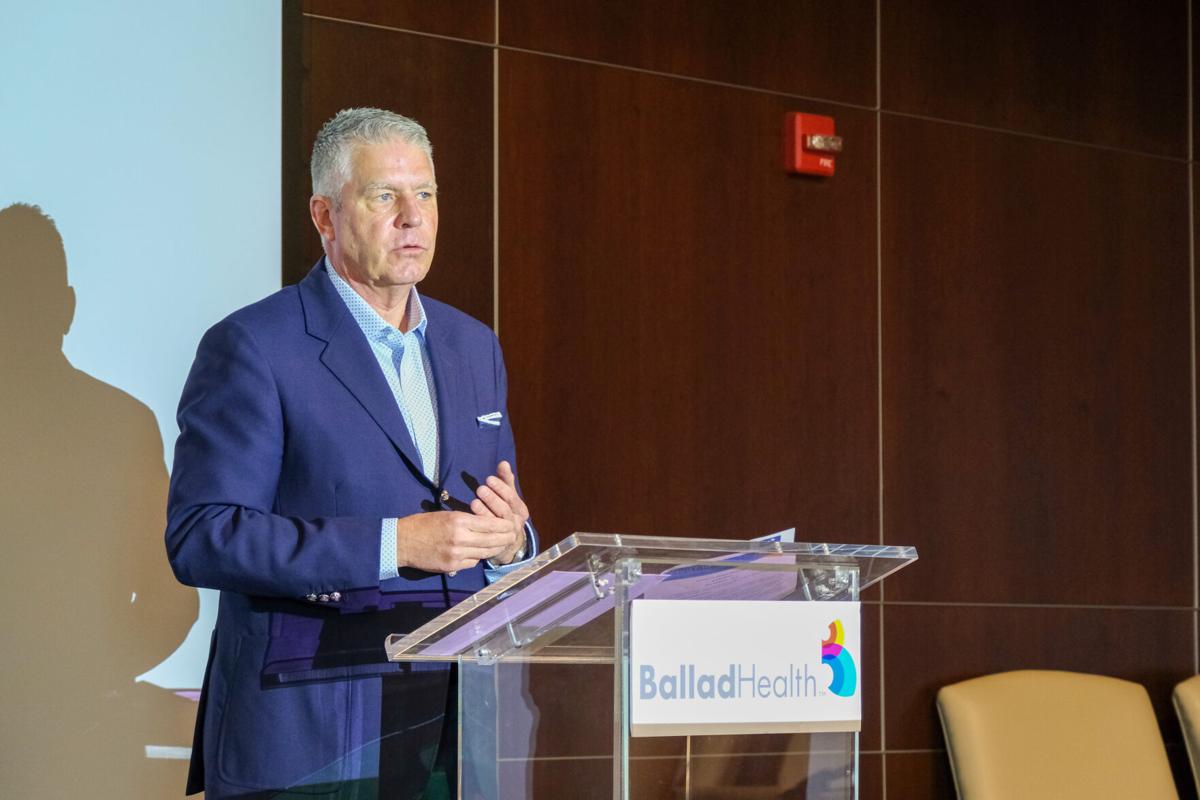 JOHNSON CITY — A more transmissible variant of the novel coronavirus is now widespread in Northeast Tennessee and is fueling new cases and hospitalizations, Ballad Health officials said on Wednesday.

“Today, I think we’re seeing that we do have a fair amount of spread (of the B.1.1.7 variant) in the region,” said Ballad Chief Operating Officer Eric Deaton. “B.1.1.7 has overtaken the original strain of COVID-19 in the region, and really now the B.1.1.7 strain is the dominant strain that we’re seeing.”

The variant was first identified in the United Kingdom last September and is the dominant strain of COVID-19 in the United States.

Dr. Clay Runnels, the hospital system’s chief physician executive, said the average amount of virus detected at their testing sites was higher than the nationwide average among other sites tested by BioBot. Ballad and Biobot Analytics will conduct an additional three cycles of testing over a four-week period, with the next results expected in about a week.

“These variants are also aggressive and cause concern that we could have additional spread,” said Deaton. “There is this great deal of virus still in our community, and in order for us to curtail it we have to do the things we continue to talk about.

“It’s really important for us to be aware, and although we feel mask mandates will go away, obviously through the orders from the governor and from our local mayors, it’s still important to take personal responsibility to wear a mask appropriately when you’re in large gatherings.”

Tennessee Gov. Bill Lee ended local authority to issue mask mandates as well as all statewide public health orders on Tuesday as he declared the virus was no longer a public health emergency and was instead a “managed public health issue.”

Deaton said any statewide decision should be made in Nashville, though the region is not out of the woods yet.

“I still think that it’s something we have to focus on,” Deaton said. “I think it is an issue for us still locally, so, yes, for us as an organization it is still a heightened issue for us, and we deal with it. We’re obviously still conducting our emergency operations center every day or at least three days a week, we still have phone calls with our local mayors, we’re still doing all the things we were doing in the past, so it’s still a very important issue and it is still an emergency for us.”

More younger people are being hospitalized, dropping the average age of hospitalization to 59.6 years old.

Sixty-two percent of those hospitalized are between ages 40 and 69, with a “significant” number of 30- and 40-year-olds ending up in the hospital. Those who are hospitalized are also coming in sicker, according to system numbers indicating a higher proportion of people in intensive care and on ventilators than during a hospitalization peak in December and January.

Despite repeated calls from health officials for the public to get the vaccine, which significantly reduces the risk of severe illness, demand for vaccine appointments has fallen considerably in recent weeks: Ballad officials estimated only about 10% to 20% of first-dose vaccine appointments are being booked.

The Northeast Regional Health Office, which oversees health departments in seven of the region’s eight counties, has seen fewer than 20% of available appointments booked, though it announced on Tuesday it would no longer require appointments to receive the vaccine.

Vaccine appointments “Here’s what’s not changed: The vaccine is still a major weapon against all of these strains and can help us get through the pandemic and get to herd immunity,” said Runnels. “We’re going to continue to encourage people and hope you will encourage your friends, family, neighbors who are eligible to go get the vaccine. It can definitely help save some lives and reduce morbidity in the community as well.”

Dr. David Kirschke, medical director of the regional health office, said staff began taking vaccine doses into community settings like churches and workplaces as demand has fallen at drive-thru clinics. Kirschke said vaccine uptake has been lower in more rural counties and with young adults, a trend that also appears with the flu vaccine “perhaps because of a lower perceived risk from the virus.”

“We encourage everyone to get vaccinated because, although the risk does decrease with decreasing age, we see hospitalizations and deaths in all age groups,” Kirschke said. “Also, younger people can transmit coronavirus to older family members and friends. We encourage anyone not already vaccinated to look to credible sources of information, such as the (Tennessee Department of Health) or (U.S. Centers for Disease Control and Prevention) website, or to talk with their health care provider.

“(The) COVID-19 vaccine is one of our best tools, along with other prevention measures such as mask use, to protect ourselves and our communities from the pandemic,” he said.

NET by the Numbers

— Data from Tennessee Department of Health

Data from Tennessee Department of Health

Where Can I Get Vaccinated?

Tennesseans can request an appointment by visiting bit.ly/2YcVMcT and highlighting their county of residence. Additionally, you can call (866) 442-5301 for more information.

The Sullivan County Regional Health Department is vaccinating people at Whitetop Creek Park. Call (423) 279-2777 to schedule an appointment and check bit.ly/3a6ZVoc for the latest information and to pre-download and fill out the vaccine paperwork.