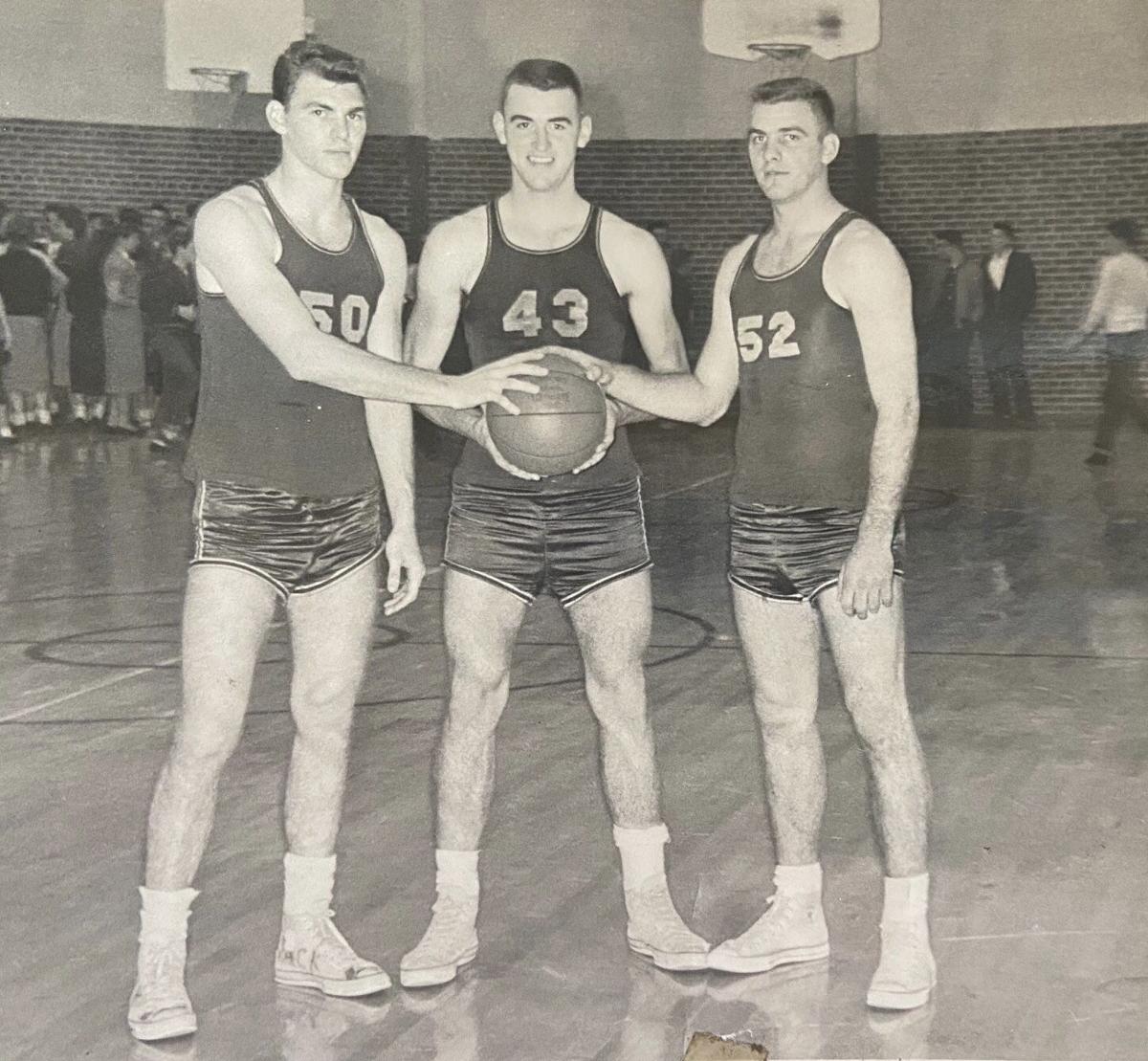 Rogersville High brothers Billy Joe, Gerald and Jid Winstead were some of the finest athletes in the region in the mid-to-late 1950s. Gerald and Jid went on to play football at Tennessee and Corpus Christi University and later signed contracts with the Houston Oilers, Dallas Texans and Montreal Alouettes.

The 1964 Montreal Alouettes of the Canadian Football League finished the season with a record of 6-8, losing in the conference semifinals. Jid (75), Billy Joe (74) and Gerald (45) were all team members. 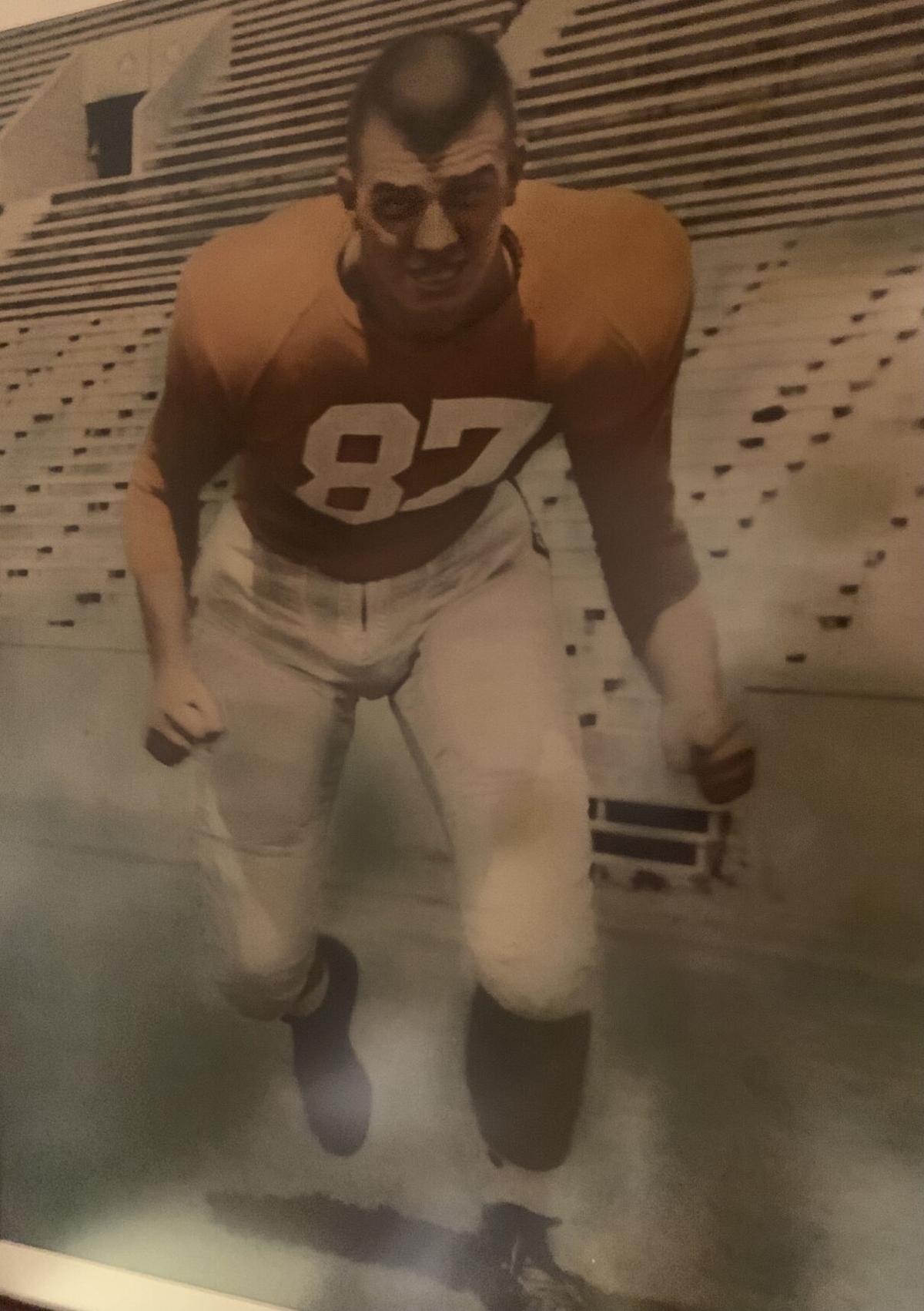 Rogersville’s Jid Winstead was a co-captain of the 1955 Tennessee freshman team. 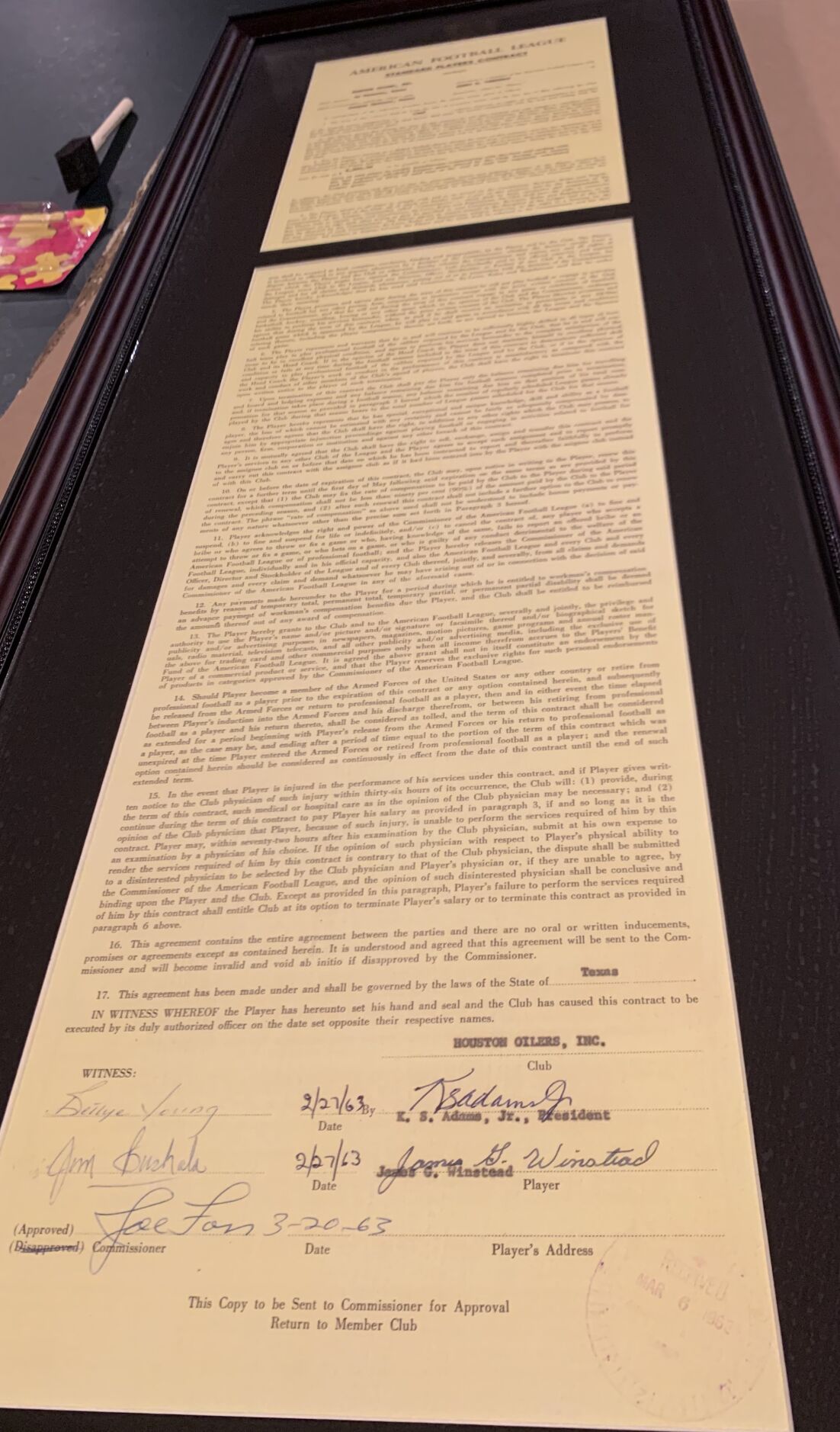 Jid Winstead’s contract with the Houston Oilers was given to his son Kurt by former owner Bud Adams before his passing. 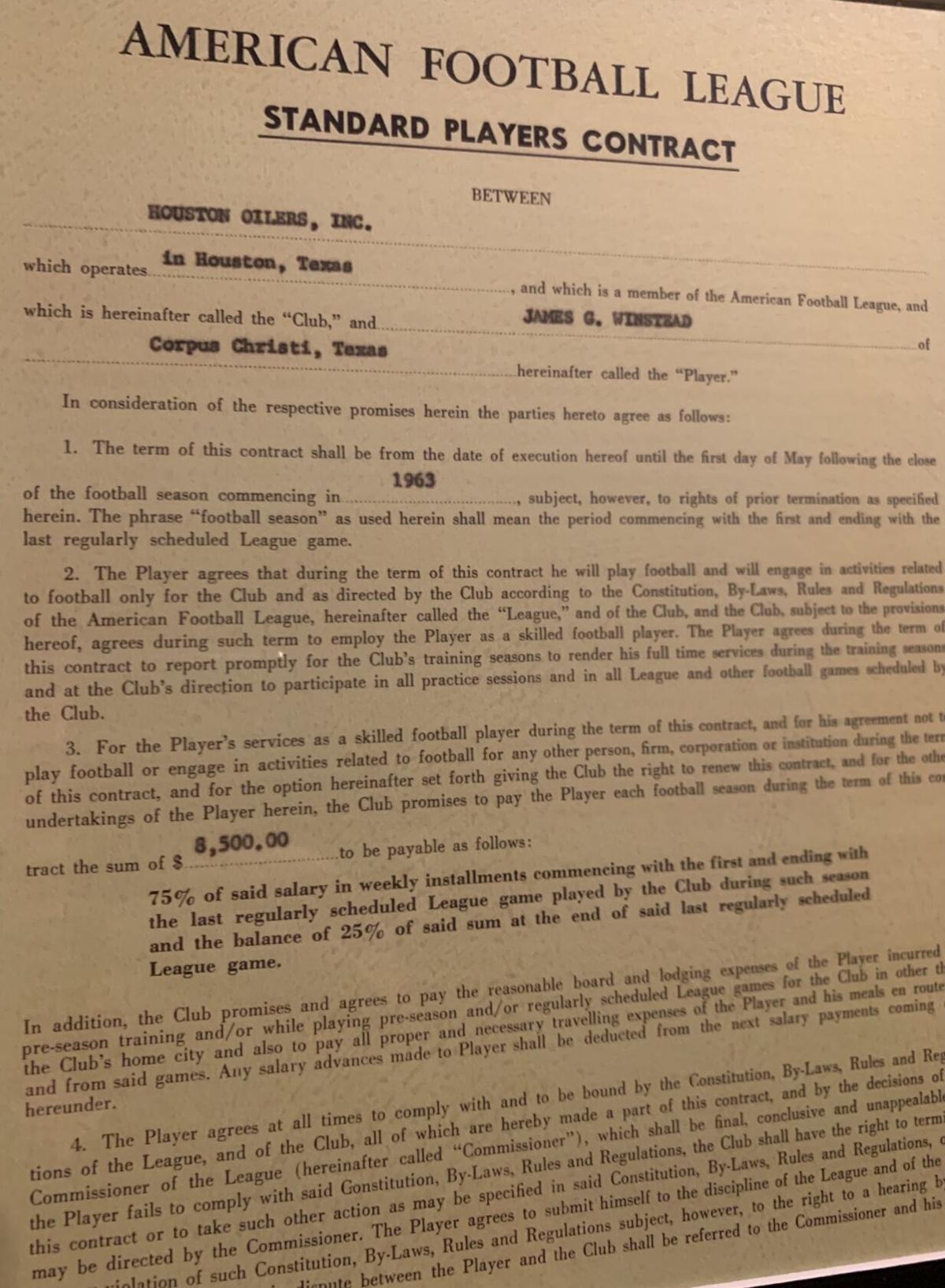 Jid Winstead’s contract for with the Houston Oilers in 1963 was worth an annual salary of $8,500.

Rogersville High brothers Billy Joe, Gerald and Jid Winstead were some of the finest athletes in the region in the mid-to-late 1950s. Gerald and Jid went on to play football at Tennessee and Corpus Christi University and later signed contracts with the Houston Oilers, Dallas Texans and Montreal Alouettes.

The 1964 Montreal Alouettes of the Canadian Football League finished the season with a record of 6-8, losing in the conference semifinals. Jid (75), Billy Joe (74) and Gerald (45) were all team members.

Rogersville’s Jid Winstead was a co-captain of the 1955 Tennessee freshman team.

Jid Winstead’s contract with the Houston Oilers was given to his son Kurt by former owner Bud Adams before his passing.

Jid Winstead’s contract for with the Houston Oilers in 1963 was worth an annual salary of $8,500.

Many football-savvy folks know about the big names that have come through the area and have gone on to the greener pastures of the National Football League.

However, professional football was not always as big as it is today.

Before the NFL-AFL merger in 1966, some players had to get side jobs to help pay bills.

In Rogersville, the surname “Winstead” carries a lot of weight athletically, especially on the gridiron. And in the mid-to-late 1950s, the Warriors were a powerhouse thanks to the great abilities of Billy Joe, Gerald and Jid.

A fourth brother, Dickie, came along about 10 years later and helped carry on the tradition his older siblings had already established.

The three older brothers were the toast of the town at the time, and under legendary coaching figures like Burleigh Davis, Rogersville thrived.

“Basketball was actually one of their first loves, but back then, everyone did every sport they could,” Dr. Mike Winstead, son of Gerald, said. “I know my dad specifically got recruited by Adolph Rupp at Kentucky to play basketball, but he went to Tennessee to play football instead.”

“When we eventually moved back to Rogersville from Ohio, we’d always run into people when we’d go out to eat or something, and inevitably there would be someone that started telling stories,” Mike said.

Some of the most notable accomplishments for the trio were on the basketball court, where in 1954-55, the Warriors ran the table in the regular season at 32-0 and were the last unbeaten team in Tennessee before losing to Greeneville in the District III tournament semifinals 59-58.

The Warriors missed the state tournament that year, but made the big dance in 1955-56 before falling in the quarterfinals to eventual champion Linden.

“I know all of them were always fond of Burleigh Davis and all the coaches they had throughout high school,” Mike said.

On the gridiron, Davis put together a 9-1 season in 1954 while the Winstead brothers were together.

“I remember that game because I watched every game that he ever played in,” Wilma Winstead, Jid’s widow, said. “Rogersville rolled up in this little tiny school bus that had driven about 12 hours down to Florida to play the game. Edgewater rolled up, and they had three big double-decker buses.

“Even though it was a long way, about half of Rogersville went to watch the game. Burleigh Davis gave everybody a sack lunch on the trip because not a whole lot of people had money back then.”

Jid led all of Northeast Tennessee in scoring with 82 points and 12 rushing touchdowns.

Billy Joe and Jid were also members of the Rogersville All-Star softball team that represented the state of Tennessee in the World Softball Tournament.

In 1954, Rogersvillle teams were the only undefeated teams in the state during the regular season in football, basketball, baseball and track.

Billy Joe and Jid each lettered 16 times during their high school careers.

“All of the boys loved Burleigh,” Wilma said. “He coached everything at Rogersville, including all of the sports that the boys played. They didn’t call him ‘coach.’ They just called him ‘Burleigh.’”

As sophomores, Jid and Billy Joe were members of the team when Tennessee was No. 1 in the country in 1956 that played Baylor in the Sugar Bowl and had the late Johnny Majors finish runner-up in the Heisman voting.

“They were so close that when one transferred to Iowa State, they all transferred,” Mike said. “Of course, they all went to Corpus Christi later on.”

At Iowa State, Jid started at defensive end for Clay Stapleton in 1958.

In Corpus Christi, Gerald and Jid were standouts and reaped the rewards of their hard work.

Gerald played in the first Southwest Challenge All-Star game in 1963 as a senior.

He alternated mostly at center on offense and linebacker on defense, averaging 15 tackles per game in his two years at CCU.

“I remember him talking about that game,” Mike said. “There were some good players in that game, and he really enjoyed that.”

Within two months of each other in 1963, all three signed professional football contracts in some capacity.

On Jan. 12, Gerald signed a contract to play for the Dallas Texans of the AFL. His contract called for a $200 bonus and his salary was estimated to be well above the AFL minimum of $8,500. On March 18, Jid signed on with the Houston Oilers, also of the AFL.

“Jid actually signed on with the San Diego Chargers at first, but he backed out,” Wilma said. “I never asked why, but that’s how he ended up with Houston. When he was in Houston, he got hurt in a preseason practice, and they sent him off to the Indianapolis Warriors.”

Billy Joe signed on a few days later with the Montreal Alouettes of the Canadian Football League.

In the same summer, the Texans moved operations to Kansas City and later became the Chiefs. The star quarterback of the squad was Len Dawson, who appeared in the first Super Bowl against the Green Bay Packers.

“Dad went to training camp, but they told him he would see the playing field more if he moved to their minor league teams, you could say,” Mike said. “Dad was raising three kids at the time, and he took the money where he could get it, so they moved to Wheeling, West Virginia.

“He played football professionally for about four years and then got into coaching.”

Gerald played for the Wheeling Ironmen of the United Football League and won the league championship in 1963.

Jid was also in the UFL as a member of the Indianapolis Warriors, the Alouettes and later in the COFL with the Newark Bears.

The two played each other six times, each winning three games apiece.

In 1964, all of the brothers were once again part of the same team, playing for the Alouettes.

“All of them loved playing sports, especially football,” Mike said. “The fact that three of them played beyond college is really amazing and probably didn’t happen all that often back then.”

“Athletics is kind of in our blood,” Wilma said. “My granddaughters (Mary Hannah and Bridget) hold the record for the most letters at Battle Ground Academy in Nashville with 20 and 21. Both of them went on to play college basketball at Centre.”

Rogersville had title hopes dashed in 1955

Led by brothers Billy Joe, Gerald and Jid Winstead, the Rogersville Warriors rolled through the regular season at 32-0 before falling in the District III tournament to arch-rival Greeneville by a single point.