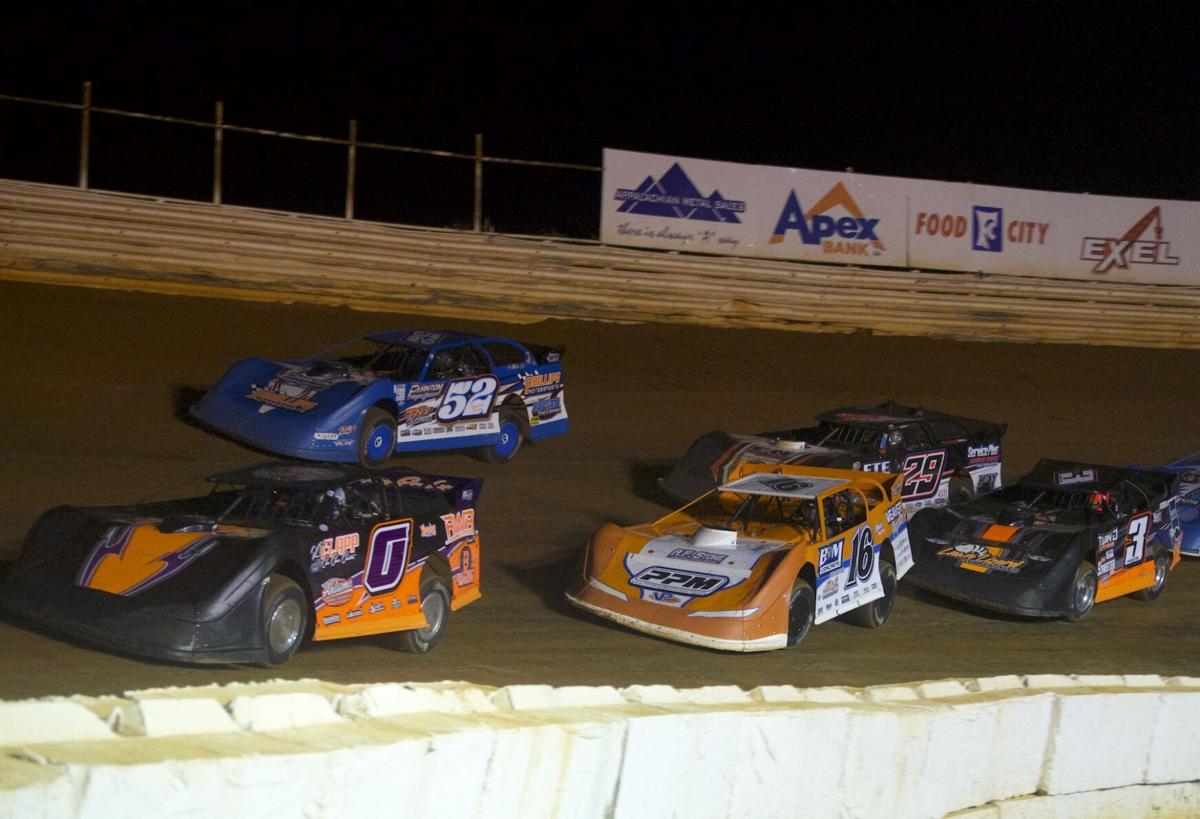 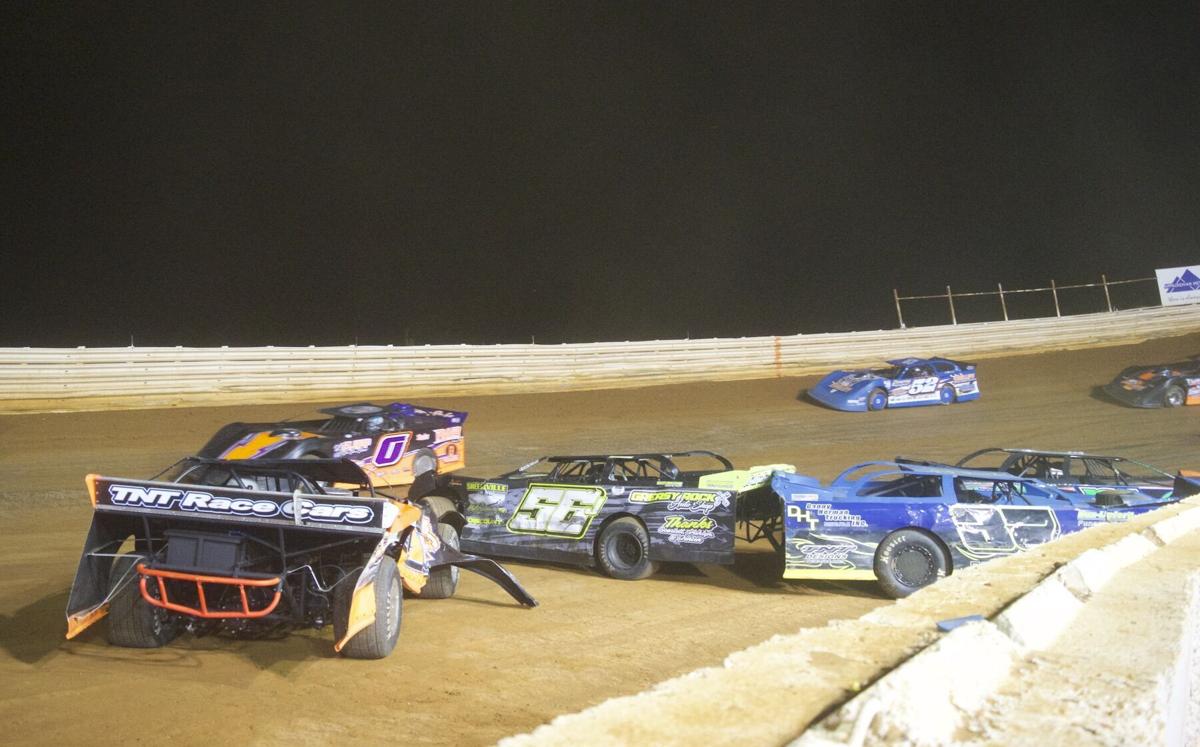 Race winner Ross White (0) drives by during the cool-down lap after a multicar crash at the end of Saturday’s Crate Late Model feature at Volunteer Speedway. 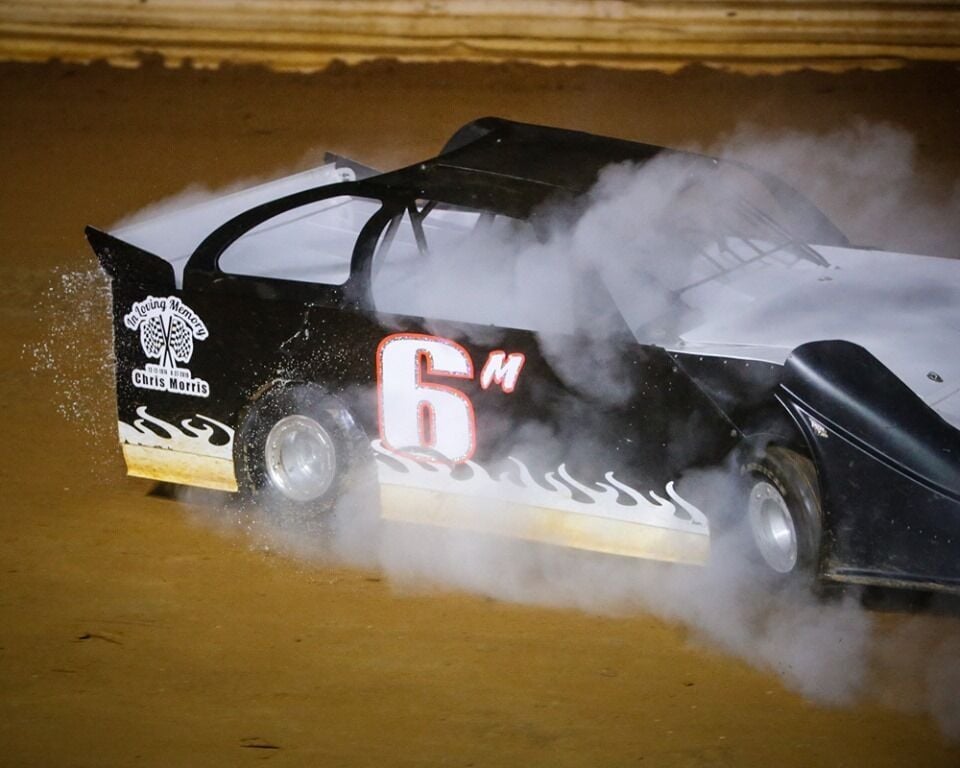 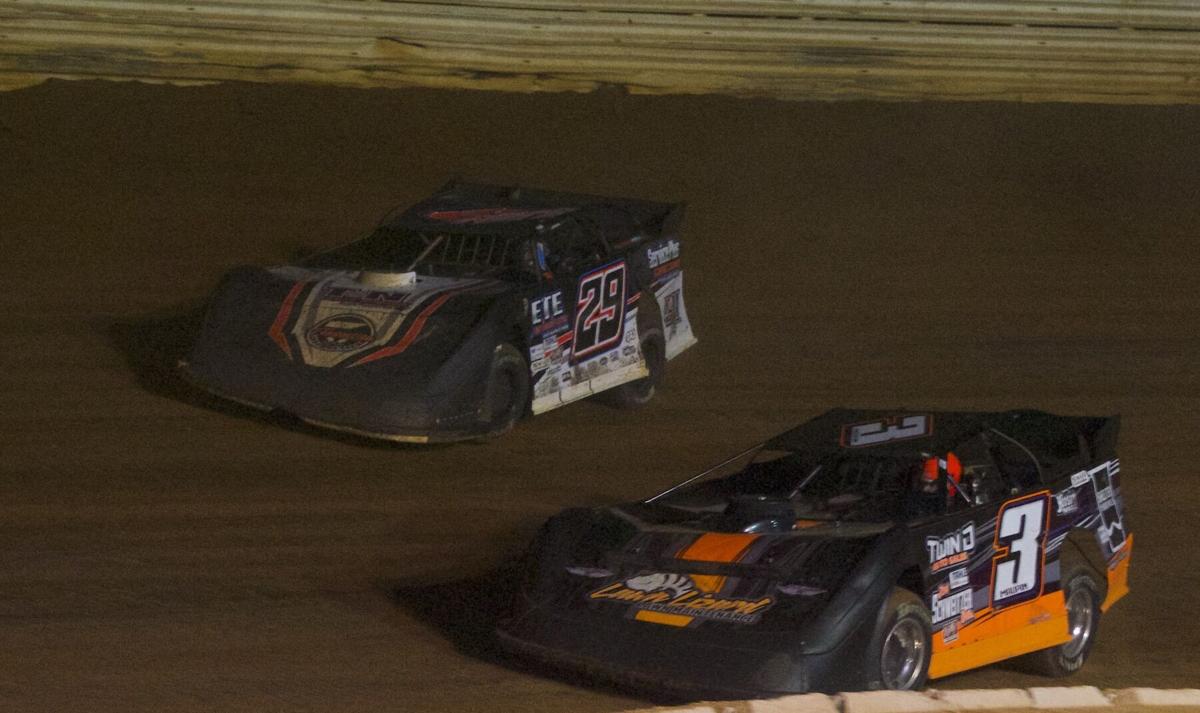 Tim Maupin (3) races to the inside of Rusty Ballenger (29) during Saturday's Crate Late Model feature at Volunteer Speedway. 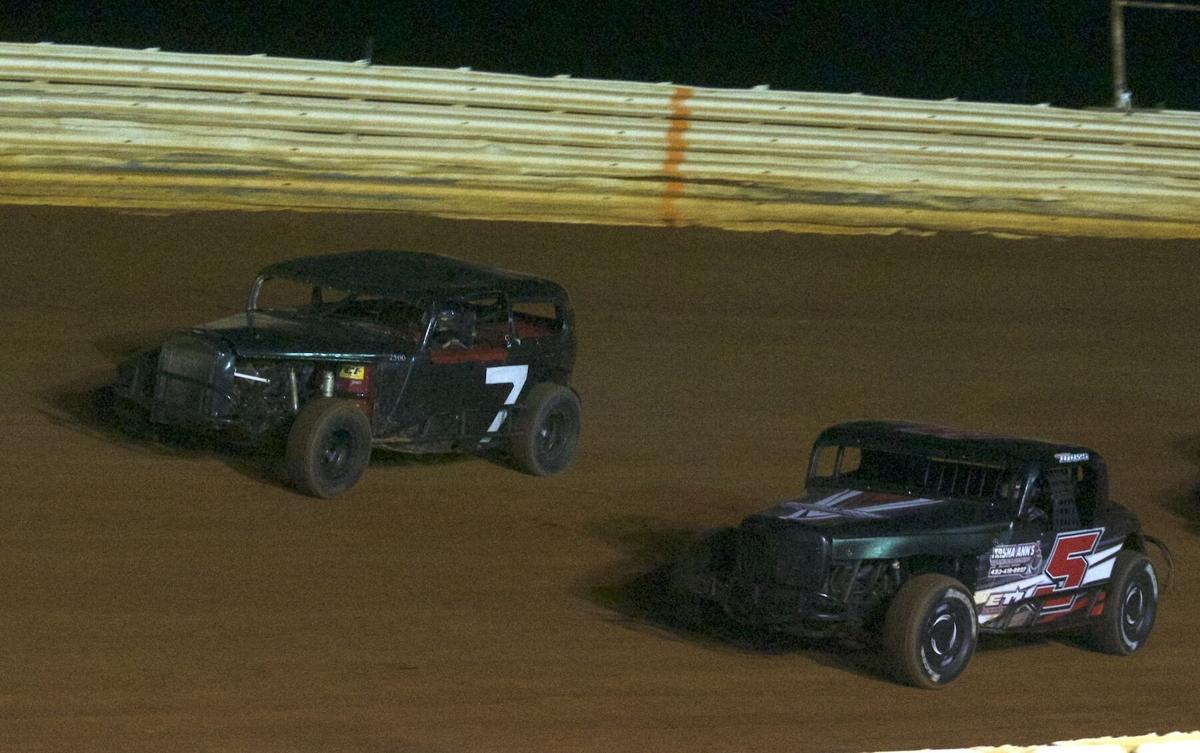 John Stevens (7) and Bobby Mays (5) race for the lead in turn 4 during Saturday's Classic feature at Volunteer Speedway in Bulls Gap. 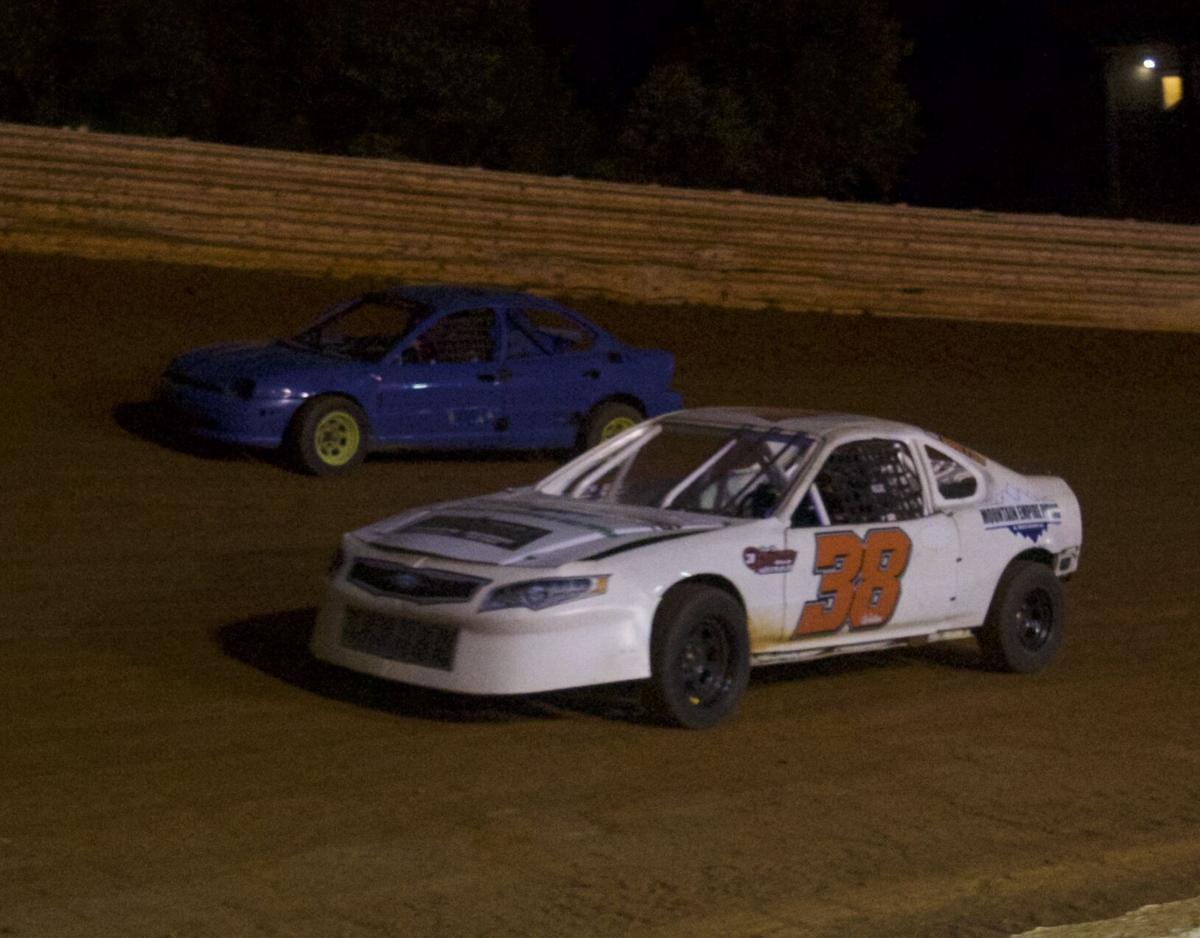 Race winner Ross White (0) drives by during the cool-down lap after a multicar crash at the end of Saturday’s Crate Late Model feature at Volunteer Speedway.

Tim Maupin (3) races to the inside of Rusty Ballenger (29) during Saturday's Crate Late Model feature at Volunteer Speedway.

John Stevens (7) and Bobby Mays (5) race for the lead in turn 4 during Saturday's Classic feature at Volunteer Speedway in Bulls Gap.

The Knoxville driver was fastest in qualifying and led all 30 laps in the Crate Late Model feature, which was preceded by a concert by country music group Shenandoah.

White was barely challenged with his No. 0 consistently making fast times around the four-tenths-mile clay oval. A caution that bunched the field up on lap 23 was about the only thing to slow him.

“We’ve had a really good race car the last few weeks and to come back here, this place is home to me,” White said. “We had a good car last night racing at Crossville, but some tough luck where we had an on-track altercation. We felt it was good for our team to come back home to somewhere where we run well and could avoid getting our stuff torn up.”

As White raced away without a scratch on his car, Crossville’s Cam Weaver and Morristown’s Shannon Emery engaged in a fierce side-by-side battle behind him. Weaver, driving the orange No. 16, took over the second position for his second runner-up finish in two Volunteer starts.

“We changed springs, everything and showed up totally different than we did last time we raced here,” Weaver said. “It was just a little off to Ross where I mis-tuned the car.

“To be the second time here and to run second twice, this place suits me well. I love this place with the banking and the stadium kind of deal where you’re down in a hole. This is a great place to race.”

“Nothing feels good to me unless I’m winning,” Maupin said. “I’m glad I got the car back in the trailer in one piece and it’s not torn up, but I never go home happy with fourth.”

Kentucky driver John Stevens edged Jonesborough’s Bobby Mays to win the 20-lap Classic feature, his fourth victory of the year. Mays inched ahead on lap 18, but Stevens powered up to lead the final two circuits.

They battled for the win after Adam Engel, who led the first 13 laps, went in the pits after dumping fluid on the track.

“Bobby was better than me on the bottom of the track, but I kept getting him back here (in turns 1 and 2),” Stevens said. “I was just holding it up there, taking a chance and hoping that he wouldn’t be able to clear me. We got a major break with Adam breaking, but we had a good race there at the end.”

Mays, who is in his first season running the Classic cars, recorded his second straight runner-up finish. He previously won championships in Street Stock and Late Models.

“I like racing John like that, door to door,” Mays said. “I got into him a couple of times where I’m not used to where the tire sits. We had a great race, though, and I look forward to racing with him more and more this year.

“Racing door to door like that, that’s what racing is all about.”

Tim Bounds recovered and engaged Stevens and Mays in a three-way battle for the lead. He finished third ahead of Kevin Crane and Johnson City’s Charles Bates.

Zach Walton of Blountville romped to a fourth straight win in the Front Wheel Drive division, finishing a half-straightaway ahead of second-place John Ketron of Kingsport.

Jack Orr raced out to a big early lead in the Mini Late Models’ inaugural visit to The Gap before the engine blew on his No. 6 machine, making him spin out with three laps to go. Skylar Delaney then held off Jonathan Ingram to score the victory.