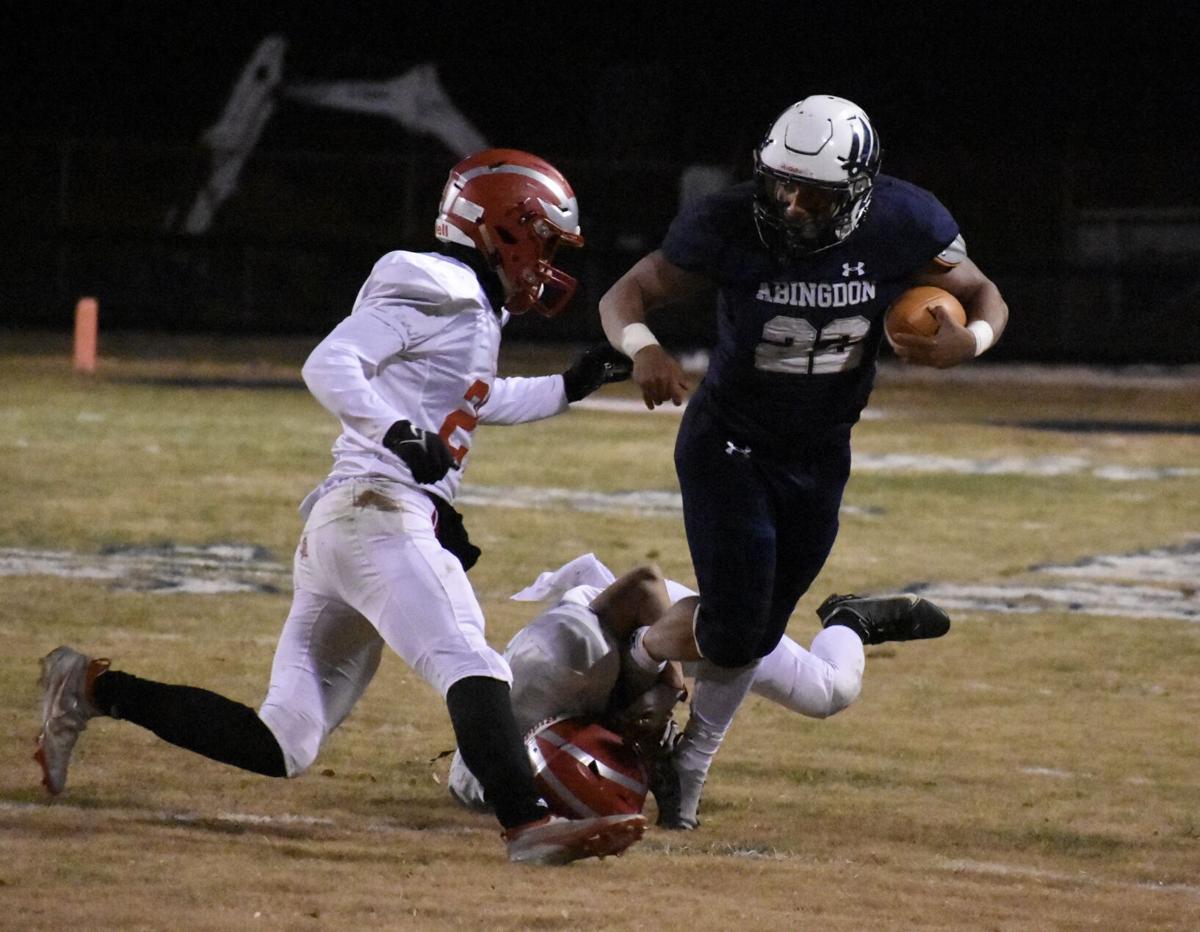 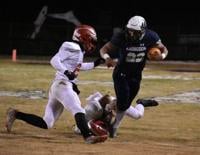 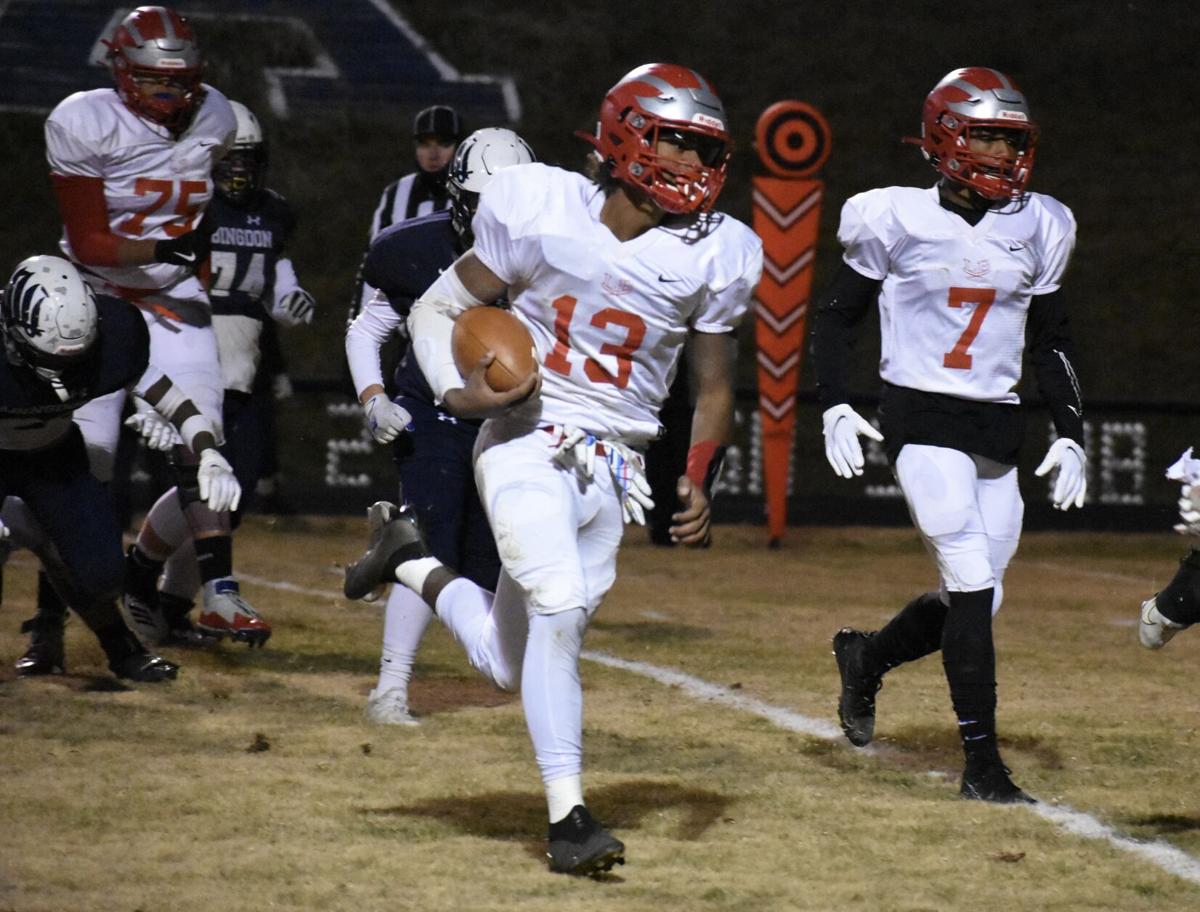 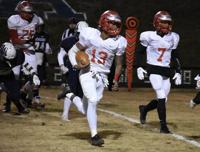 The Abingdon football team served up a nice big helping of vengeance to three-time defending region champion Lord Botetourt on Friday in the Region 3D title bout on a frigid night at Falcon Stadium, winning 28-14.

The Falcons claimed their first region title since 1979 and advanced to the state semifinals for only the second time in school history. They also won their 12th game of the season, tying the 1979 squad for the most wins in school history.

“That was a long time ago when they won in 1979, and I’m so proud of these kids,” Abingdon coach Garrett Amburgey said. “We’ve been chasing these guys trying to get to that region level. We knew we had to get more physical and get tougher.

“Our guys made huge strides in the spring and we came up short, but we just kept working and battling.”

Abingdon senior slot receiver Haynes Carter made two of the biggest momentum-changing plays of the game.

After the Cavaliers (8-4) scored on their first drive of the second half for a 14-7 lead, Carter caught a 52-yard strike over the middle from Cole Lambert for a score to again knot the score.

“We repped that all week in practice and we played physical and fast tonight,” Carter said. “Every time we’ve played (Botetourt) in the last five years, they’ve beat us every time. It feels great to win at home and be region champs.”

After the Cavs were forced to punt on the next drive, Carter came up huge again by blocking the kick and taking it 27 yards for the go-ahead score.

“Special teams has always been a big thing all year and we practiced it all week,” Carter said. “We pushed the left side and the right side and I saw a hole. I put my hands up, got the ball, picked it up and scored.”

Added Amburgey: “That’s probably one of the greatest plays in Abingdon football history. I love coaching this football team and they’re so much fun to practice with and they always play hard.”

“The counter play was giving us a hard time,” Amburgey said. “It was tough to stop and they were kicking out and getting guys through the hole.”

With the score tied at 7, the Cavs had the ball at the 8 and looked as if they were going to take a lead going into the break. However, a negative play and a personal foul penalty set them back and they opted for a 42-yard field goal attempt. Kicker Bryson Harvey — whose had a season-long field goal of 53 yards — hooked the kick wide right with 12.6 seconds left and the score remained deadlocked.

On three of its final drives, Lord Botetourt was stopped three times on fourth down.

Abingdon ran off more than seven minutes on its final drive of the game, which started with 8:35 left. Facing fourth-and-6, Lambert completed an out route to senior wide receiver Peyton McClanahan for 8 yards to keep the march alive.

Malique Hounshell went 7 yards to the end zone with 1:18 to go to cap the drive and ice the victory.

“Malique ran with a lot of guts and Charlie Sturgill had a great block to seal the edge,” Amburgey said.

Hounshell rushed 25 times for 100 yards and two scores, Carter caught five passes for 93 yards and a TD and Lambert was 6-of-13 passing for 111 yards and a score.

Abingdon only had 12 first downs but got them late when it counted.

Nicely carried the ball 31 times for 149 yards and a score. Bratton was supremely effective on the outside, gaining 118 yards on 21 carries and a TD.

Lord Botetourt outgained Abingdon 275-215 but managed only three first downs in the second half.

Saturday’s state matchup will be held at Liberty’s Williams Stadium.