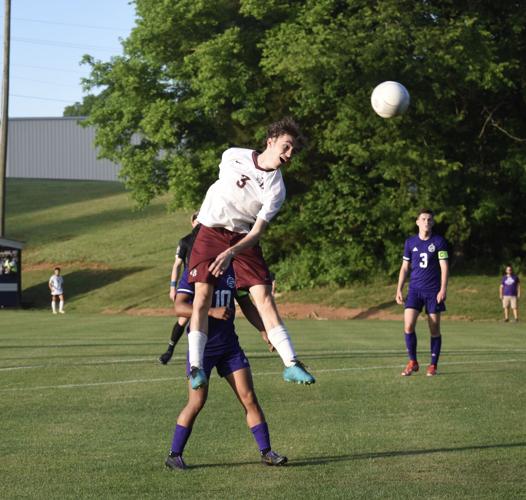 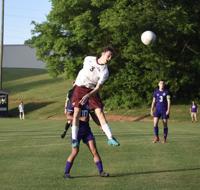 Dobyns-Bennett’s Andrew Unold (3) goes up for the header in Tuesday‘s Region 1-3A semifinal at Sevier County. 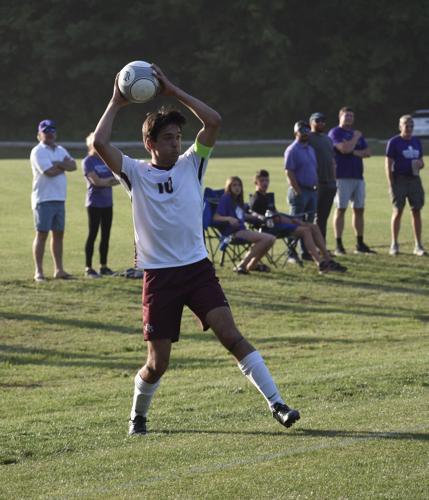 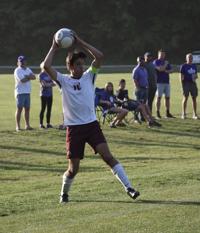 D-B’s Maddox DeVinney readies for the throw-in during Tuesday’s match. DeVinney scored in the 15th minute of the Tribe’s 2-0 regional victory.

Dobyns-Bennett’s Andrew Unold (3) goes up for the header in Tuesday‘s Region 1-3A semifinal at Sevier County.

D-B’s Maddox DeVinney readies for the throw-in during Tuesday’s match. DeVinney scored in the 15th minute of the Tribe’s 2-0 regional victory.

SEVIERVILLE — Another day, another exciting road win for Dobyns-Bennett.

A mere 24 hours after the Tribe softball team pocketed a regional victory on the road, boys soccer took the spotlight and the Indians upended 2021 TSSAA Class AA champion Sevier County 2-0 at the Sevier County Soccer Complex.

A penalty kick by Eric McReynolds in the 59th minute of Tuesday’s Region 1-3A semifinal provided a huge momentum swing for the Indians, who advanced to their first region title game since 2018.

McReynolds was taken down in the box on a breakaway attempt and earned his way to a free shot at the goal with only the keeper in his way.

“That was a huge momentum boost for us because after that they really started to give in a little bit,” McReynolds said. “This will be my first trip to the region finals since I’ve been here and it’s an awesome feeling.”

Maddox DeVinney had the other goal, scoring in the 15th minute off a rebound about 2 yards short of the goal.

The Indians (16-1-3) will meet longtime rival Science Hill for the region championship on Thursday in Johnson City. The Hilltoppers shut down Jefferson County 3-0 on Tuesday.

For Tom LaGuardia, the Tribe coach and a D-B alum, reaching the region finals and earning a sectional berth at his alma mater is massive.

“I did it when I was (coaching) at (Sullivan) South, but this is the first time that I’ve been able to come home and get to the next step,” he said. “This was a game of momentum swings on both side. When Eric made the penalty, I knew they were going to turn it up. Our defense was a total team effort.”

The Smoky Bears (13-4-1) had their fair share of chances throughout the match but could not convert. That was in part the result of the brilliant defense Kingsport played, interrupting passing lanes and disrupting the flow of the game.

“That was a really good team, but I thought we were able to keep them in front of us and not let those lanes open up,” LaGuardia said.

“Like I said before, it was one of our best defensive efforts all season and we had to have it tonight. It was a total team effort and I’m so proud of them.”

As has happened so many times — across all sports — the Indians and Hilltoppers are meeting at a critical juncture.

“It’s funny because we always seem to find each other during the postseason,” said LaGuardia, whose squad fell 2-1 to the ’Toppers in last week’s district tournament final. “It should be another really good game. I know we’ll be ready for the challenge.”

Science Hill’s Isaiah Neal scored two second-half goals to give the Hilltoppers the cushion they needed to upend Jefferson County 3-0 at Kermit Tipton Stadium on Tuesday in the Region 1-3A boys soccer semifinals.