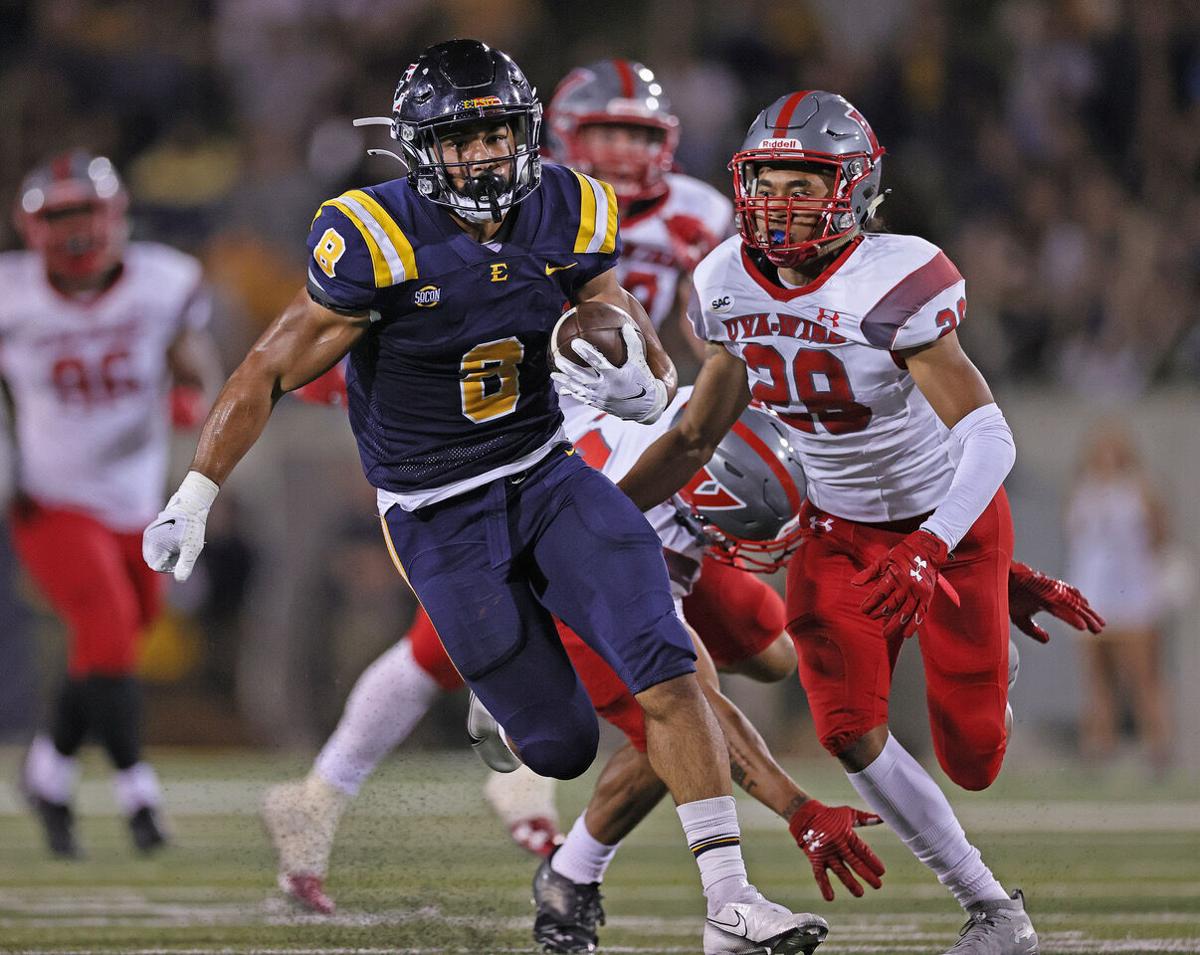 During his career, Jacob Saylors has averaged 6.3 yards per carry, which would stand as the East Tennessee State record if he’s able to maintain that pace. In addition, he has 1,623 career yards and is about to move into 10th place on the school’s all-time rushing list. 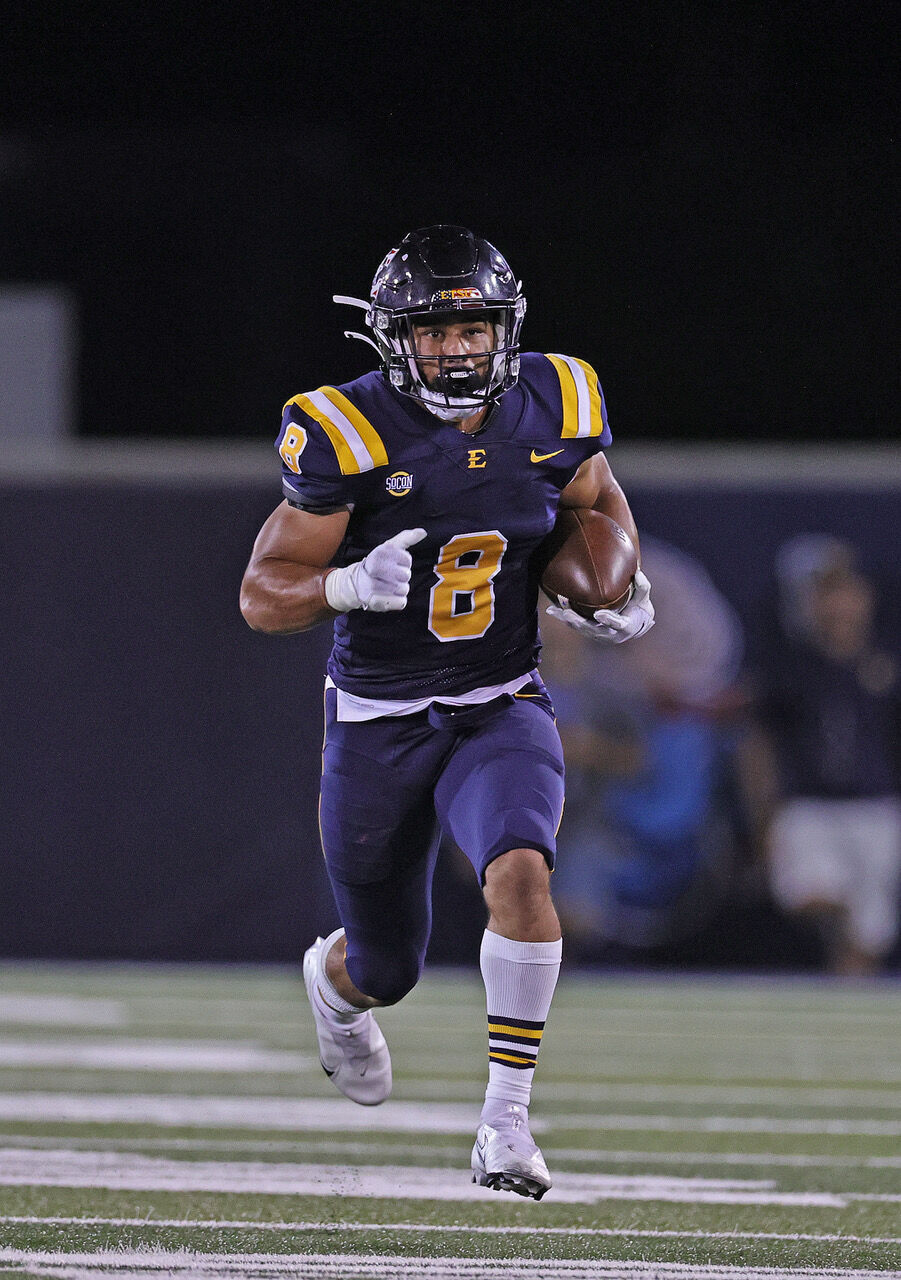 Jacob Saylors has been one of the most efficient running back in ETSU history.

During his career, Jacob Saylors has averaged 6.3 yards per carry, which would stand as the East Tennessee State record if he’s able to maintain that pace. In addition, he has 1,623 career yards and is about to move into 10th place on the school’s all-time rushing list.

Jacob Saylors has been one of the most efficient running back in ETSU history.

JOHNSON CITY — Jacob Saylors admits he’d like to get the ball more. What running back wouldn’t?

What Saylors has done, though, is provide results every time he gets the chance. During his career, Saylors has averaged 6.3 yards per carry, which would stand as the school record if he’s able to maintain that pace. In addition, he has 1,623 career yards and is about to move into 10th place on the school’s all-time rushing list.

Saylors, a junior from Jasper, is doing this while Holmes chases the career rushing record.

“Every running back wants the ball on every play,” Saylors said. “But it takes a lot of selflessness to be OK and accept your role on the team. I really have accepted my role on this team. I honestly don’t think I could carry the ball 35 times and stay healthy with my past, but you know if that day ever comes, I’m looking forward to it.”

In the day and age of the transfer portal, it would be easy for Saylors to try to find greener pastures, a place where he could carry the ball more. Not a chance, he says. His roots run deep at ETSU.

“I love them boys,” he says. “I wouldn’t want to play anywhere else. I couldn’t imagine wearing anything except the blue and gold now. You know that’s something that, if it ever has crept in my mind, I’m quick to push it back because it’s about more than that. We have the ability to leave here this year and go down in the history books as one of the best teams to ever play here. That right there is worth more than anything else.”

Having Saylors and Holmes in the same backfield has made both players better by keeping them fresh. When Holmes comes out of the game, the offense rarely suffers.

“We’re really blessed to have two backs like we do,” ETSU coach Randy Sanders said. “You know what Quay’s accomplished, I don’t mean to take anything away from him, but I think having Jacob here and the combination of the two of them makes both of them better.”

Saylors and Holmes are each other’s biggest fans as well.

“If you ever pay attention during the games, any time one of us makes a big play, the other one’s usually right there,” Saylors said. “If we don’t run on the field, then we’re right there on the sideline waiting for the other one to get back.”

Sanders likes to hear that.

“It would be really easy when you have two guys as talented as they both are, for a little jealousy to creep in,” Sanders said. “But that hasn’t been the case, and that sets a great example for the rest of our football team.”

Saylors was the Southern Conference offensive player of the week after his performance against UVA Wise. He ran for 75 yards and caught passes for 75 more. His two touchdowns came on a 16-yard run and a 64-yard screen pass.

Asked what he likes better, pounding the rock or catching a pass, he laughed.

“Honestly, I don’t have a preference,” he said. “Either way, having the ball in my hands, that’s an amazing feeling.”

Saylors also returns kicks and plays on the kickoff return unit, a thankless job that gets little attention.

“I want to make a play for my team no matter what it is,” he said. “The first time I talked to a reporter in college that’s what I told him, I don’t care if it’s offense or defense.”

It’s difficult to comprehend, but shortly before Saylors’ first season in 2018, he was still working as a defensive back. Then came the fateful preseason scrimmage where he broke off two 55-yard touchdown runs. Even though had had an interception in the previous scrimmage, he’s been a running back ever since.

“Guys bring it up more often than you would think, especially the older guys because a lot of the freshmen and sophomores that are here now, they can’t picture me on the other side of the ball,” he said. “It’s funny when people bring it up.”

Now there’s no looking back for Saylors, who says he has one goal before every practice or game.

“The feeling that I literally just gave everything I have, trying to be the best football player I can be,” he said. “And that’s really the mindset I have every time I step on the field.”