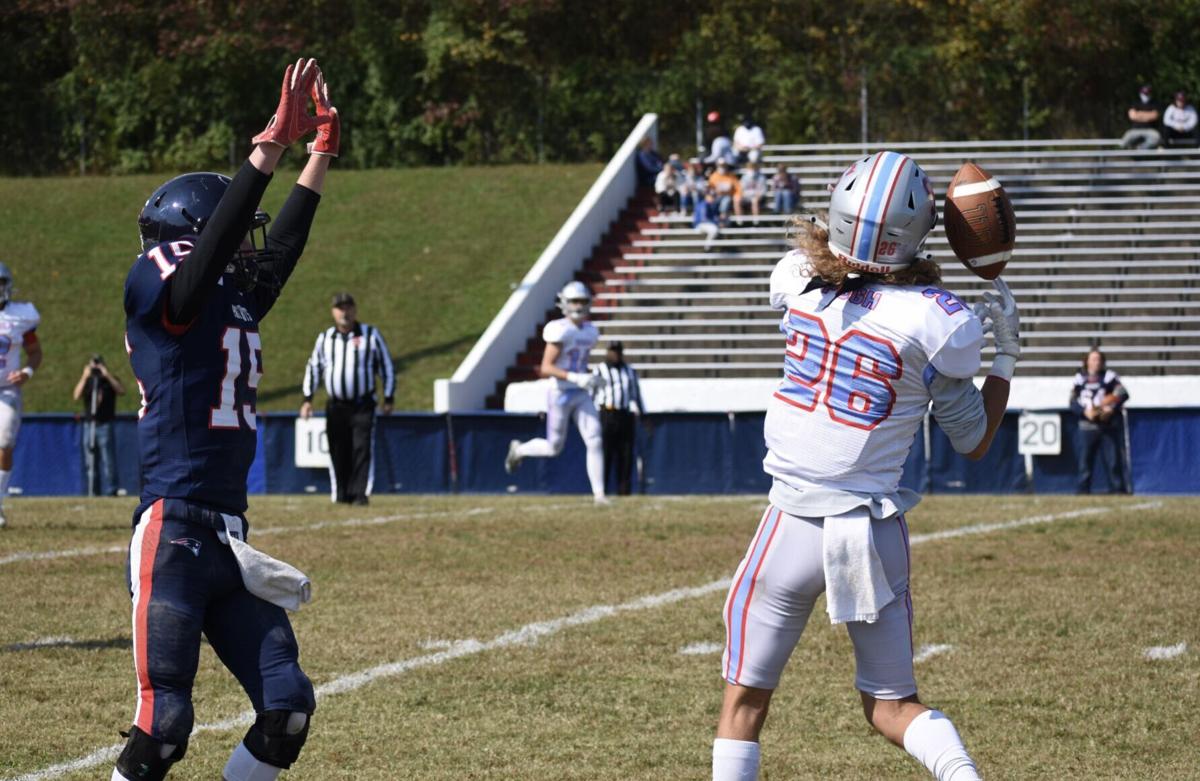 Sullivan South’s Cody Pugh (26) juggles the football before hauling in an interception in front of Sullivan East’s Hunter Brown (15) during Saturday’s game in Bluff City. Pugh took the pick all the way back to the 6-yard line. The Rebels won 44-0. 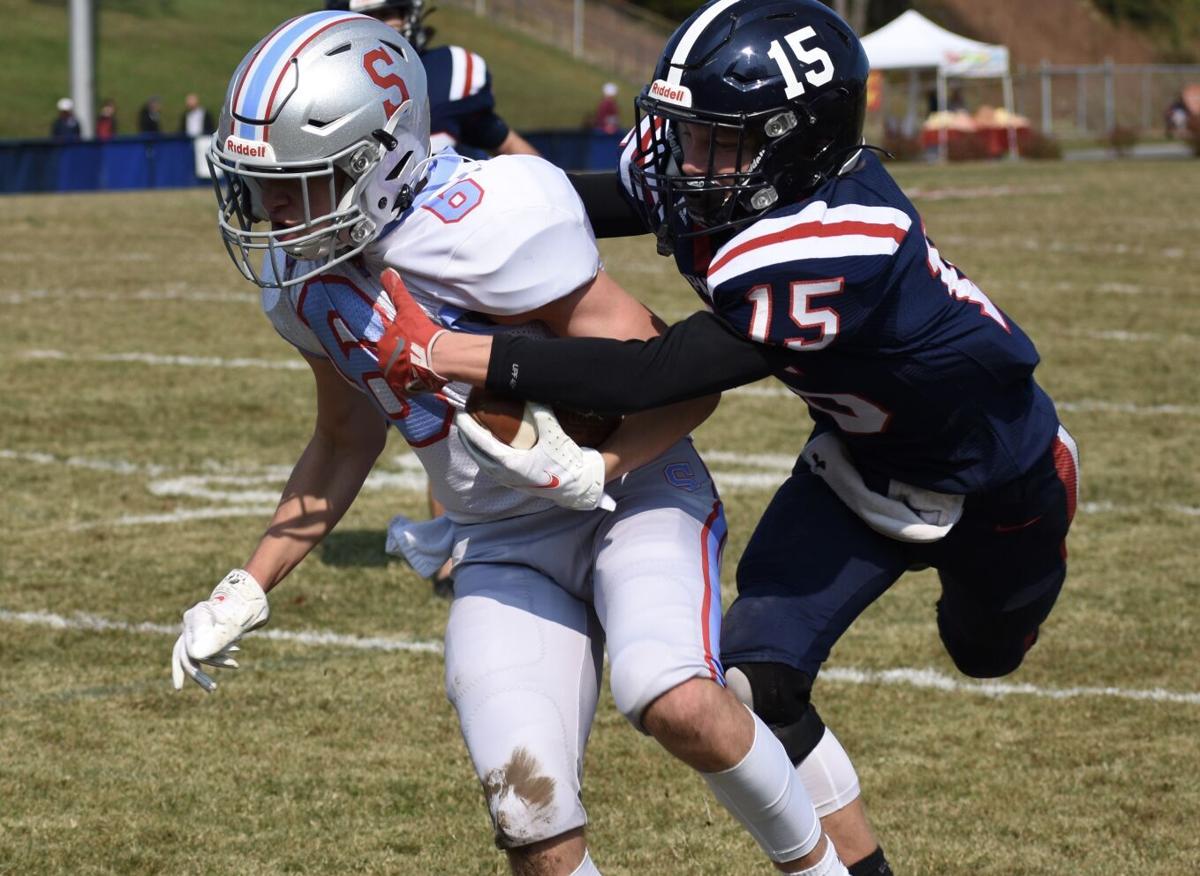 Sullivan South’s Eli Iacino (6) shakes off a tackle attempt by Sullivan East’s Hunter Brown (15) on his way to a first down during Saturday’s Region 1-4A game in Bluff City.

Sullivan South’s Cody Pugh (26) juggles the football before hauling in an interception in front of Sullivan East’s Hunter Brown (15) during Saturday’s game in Bluff City. Pugh took the pick all the way back to the 6-yard line. The Rebels won 44-0.

Sullivan South’s Eli Iacino (6) shakes off a tackle attempt by Sullivan East’s Hunter Brown (15) on his way to a first down during Saturday’s Region 1-4A game in Bluff City.

Junior Austin Riner, South’s backup quarterback, took over for starter Ethan Bergeron in the second quarter and feasted on the Patriots’ defense, racking up three rushing touchdowns and one passing score.

“We still have a lot of things that we need to clean up,” said coach Justin Hilton, whose Rebels had the game in hand early. “If you asked our guys, they wouldn’t be satisfied with today. It was nice to come out and had some guys step up.”

A standout day on defense saw South (7-1, 4-1) intercept East quarterback Ethan Bradford three times and hold the Patriots to just 8 yards of total offense and minus-34 yards on the ground. Cody Pugh, Eli Iacino and Kaleb McClain snared the interceptions.

“A lot of what happened in the secondary happened because of the pressure we got up front,” Hilton said. “Our guys were getting back there and getting pressure. We knew they were going to try to throw it up and our guys went up and got the ball.”

The Rebels also recorded a second-quarter safety when Dominic Cross was tackled in the end zone.

With South already ahead by two scores and again knocking on the door, Bergeron was replaced after being intercepted by East’s Hunter Brown. Bergeron, who also had an earlier fumble when the ball slipped out of his hand on a throw, finished with 65 yards on 6-of-11 passing and rushed for a touchdown.

Hilton said he believed the QB change provided a spark for the offense.

“(Riner) has been patiently waiting for that opportunity and it presented itself today,” Hilton said. “He stepped in there and didn’t really give me a reason to bring him out. We’re going to go with the hot hand like we do at any other position. Today it was Austin’s day and I thought he did a really nice job leading our offense.”

Brody Ratliff had six receptions for 68 yards and Isaac Haynie was on the receiving end of a 50-yard pass play late that set up South’s final score. Damien McClain caught Riner’s touchdown pass on a screen out of the backfield.

East (2-4, 1-2), which celebrated homecoming, looked like a team that had barely been allowed to practice for two weeks because of coronavirus-related issues. Bradford struggled mightily under South’s pressure, rushing many throws, and finished 9-for-29 with 42 yards.

“We’re not here to make excuses and South is a heck of a ballclub,” first-year Patriots coach JC Simmons said. “They showed up ready and prepared. They wanted to get this last win against us and we didn’t make enough plays. The reality is that (Bradford) and Hunter Brown haven’t really played in a month and were running on one practice. It definitely showed.”

The Rebels have only a five-day turnaround before their next game. They welcome No. 1-ranked Elizabethton to Death Valley on Thursday night.

East will look to get back on track at Sullivan North.

“It will be nice to get back in a routine and back in school next week,” Simmons said. “It’ll be good to be back practicing and trying to build that family environment that we’re looking for.”