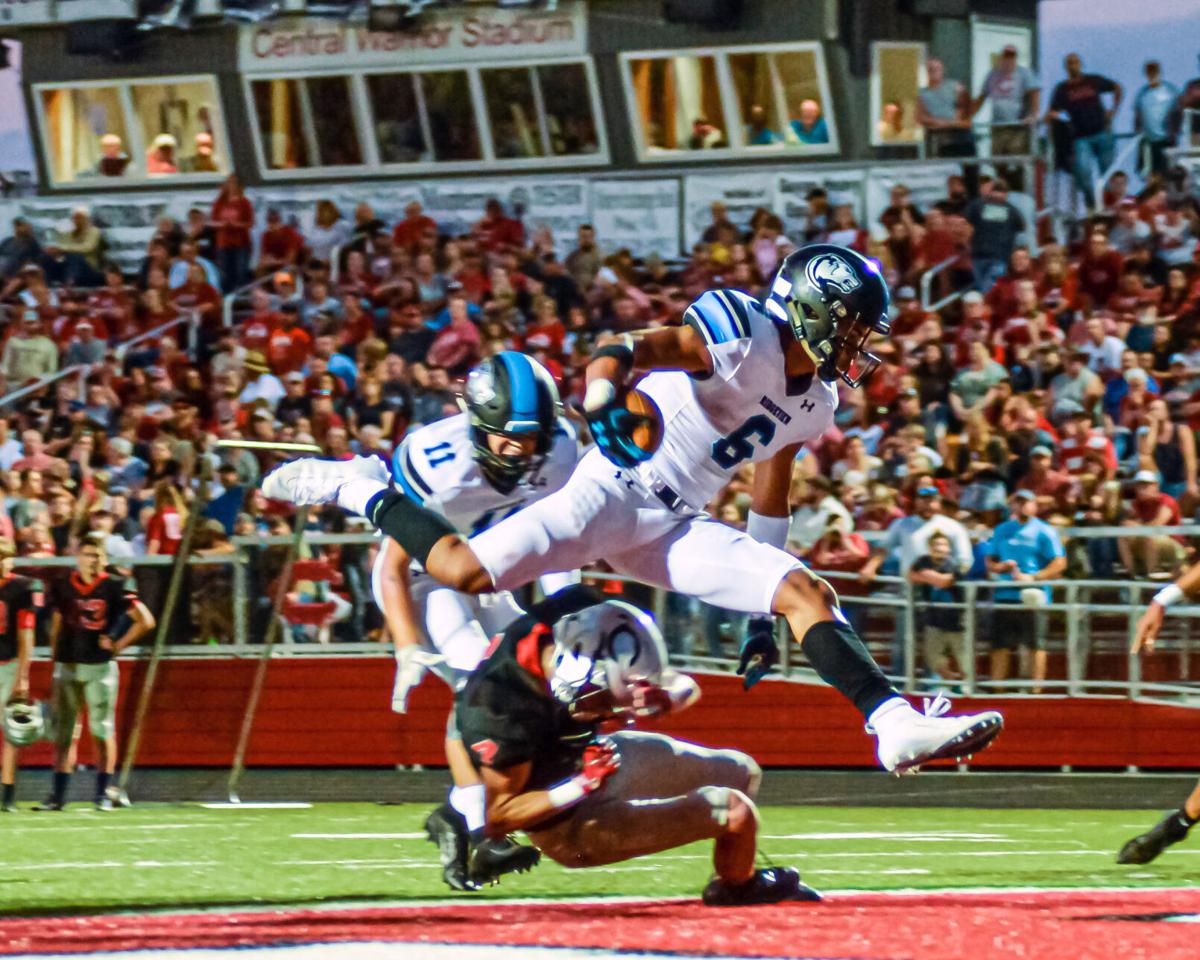 Ridgeview senior running back Trenton Adkins could be playing football in the fall and wearing a different uniform if he transfers to a school in Tennessee or Kentucky. 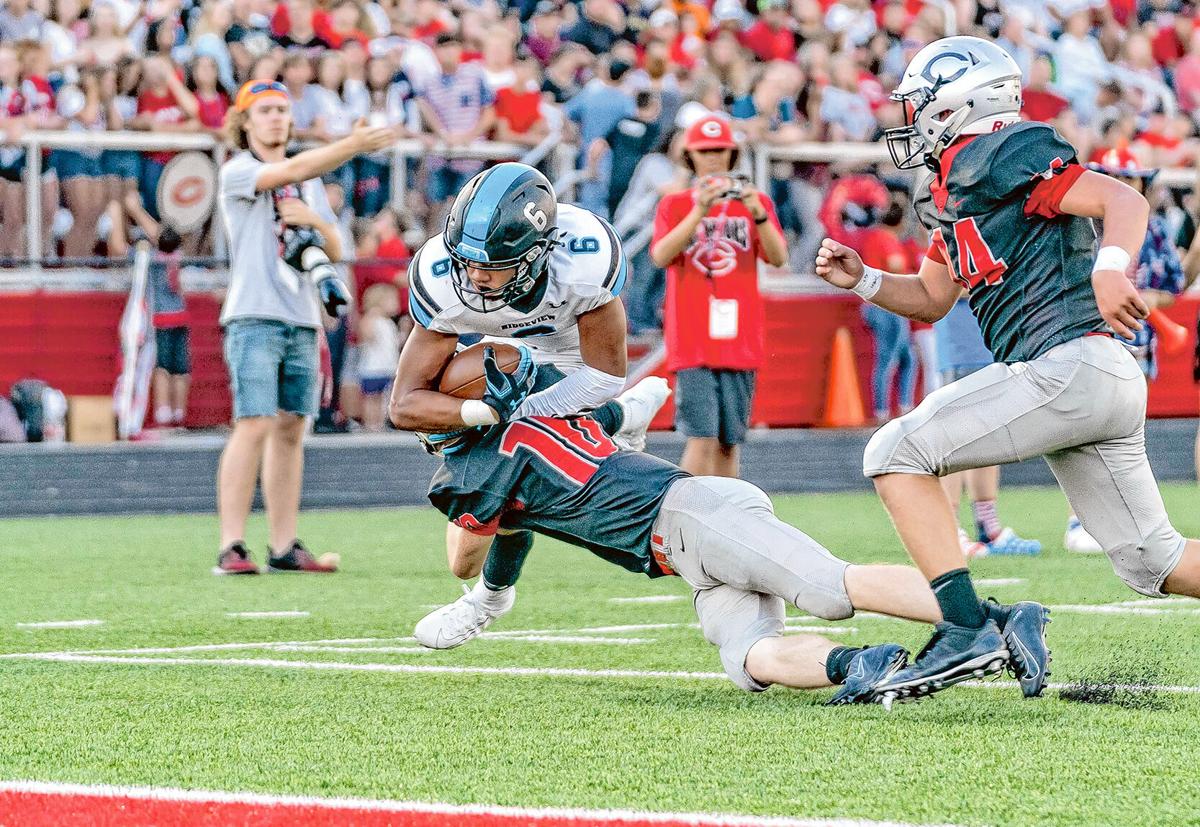 Ridgeview senior running back Trenton Adkins (6) could be playing football in the fall and wearing a different uniform if he transfers to a school in Tennessee or Kentucky.

Ridgeview senior running back Trenton Adkins could be playing football in the fall and wearing a different uniform if he transfers to a school in Tennessee or Kentucky.

Ridgeview senior running back Trenton Adkins (6) could be playing football in the fall and wearing a different uniform if he transfers to a school in Tennessee or Kentucky.

CLINTWOOD — The most recruited football player in Southwest Virginia could have a new home in a new state soon.

Ridgeview senior Trenton Adkins said Wednesday he is considering a move to Kingsport to play for Dobyns-Bennett or transferring to Pikeville, Ky.

Adkins, who is being recruited by about 20 schools, including several Power 5 schools, said Monday’s decision by the VHSL Executive Committee to move football to the spring and to condense the football season by 40% of its normal season has him and his family thinking about moving across state lines.

“It’s really upsetting that they shortened the season,” the Ridgeview record-holder said. “I guess everybody is upset about that.

“I’m considering (transferring). Some of it will depend on what they decide to do about the playoffs.”

The news does not come as a complete shock to new Ridgeview coach Todd Tiller, who said Wednesday that he has heard rumors that Adkins is considering transferring.

The Wolfpack coach would love to have Adkins on his squad in the spring, but he said if Adkins and his family decide transferring to another school is for the best, he wishes him well.

“Trenton said that he would talk to me before making his final decision,” Tiller said.

Adkins has rushed for just over 6,000 yards and 86 touchdowns in his first three years at Ridgeview, including 2,863 rushing yards and 47 rushing touchdowns and one kickoff return for a touchdown last season.

Adkins said he considered graduating early from Ridgeview as part of the 2020 class and entering college in the fall. But he said he wants another year at the prep level.

“I’d like to have another year of high school,” he said.

Just exactly where that other year is, however, is still up for grabs.

“Either Pikeville or Dobyns-Bennett,” Adkins said about where he is considering transferring.

Virginia schools will not play football games until March and will play only six regular-season games under the proposal approved by the VHSL.

The move allows Tennessee schools to play a normal schedule of games, including a postseason.

In Kentucky, the KHSAA approved a plan Tuesday that allows football programs to begin practice on Aug. 24, and an eight-game regular-season would begin Sept. 11. Like Tennessee, the Kentucky plan also includes a full postseason.

The two plans are more appealing to Adkins than the VHSL approach, which could likely include an abbreviated postseason. Virginia officials, while not taking action on the postseason yet, have said because of travel concerns, the football postseason could be limited to regional championships or to a one-game bowl season.

Adkins, an all-state running back and the Times News offensive player of the year last year, said he plans on playing football regardless of where he is for his senior year.

Some top football prospects in Virginia have indicated they may not play in the spring because of preparing for their freshman college season.

Not playing will not be the case for Adkins, he said.

If he continues his prep career at Ridgeview, Adkins said he also plans on playing basketball in the season that is slated to start near the end of the year.

In addition to basketball, he said he will likely spend his winter season competing in indoor track, where he participates in the long and triple jumps and the 4x100 relay.

Adkins said he also plans on competing in outdoor track in the VHSL spring season that starts in April, if he stays at Ridgeview.