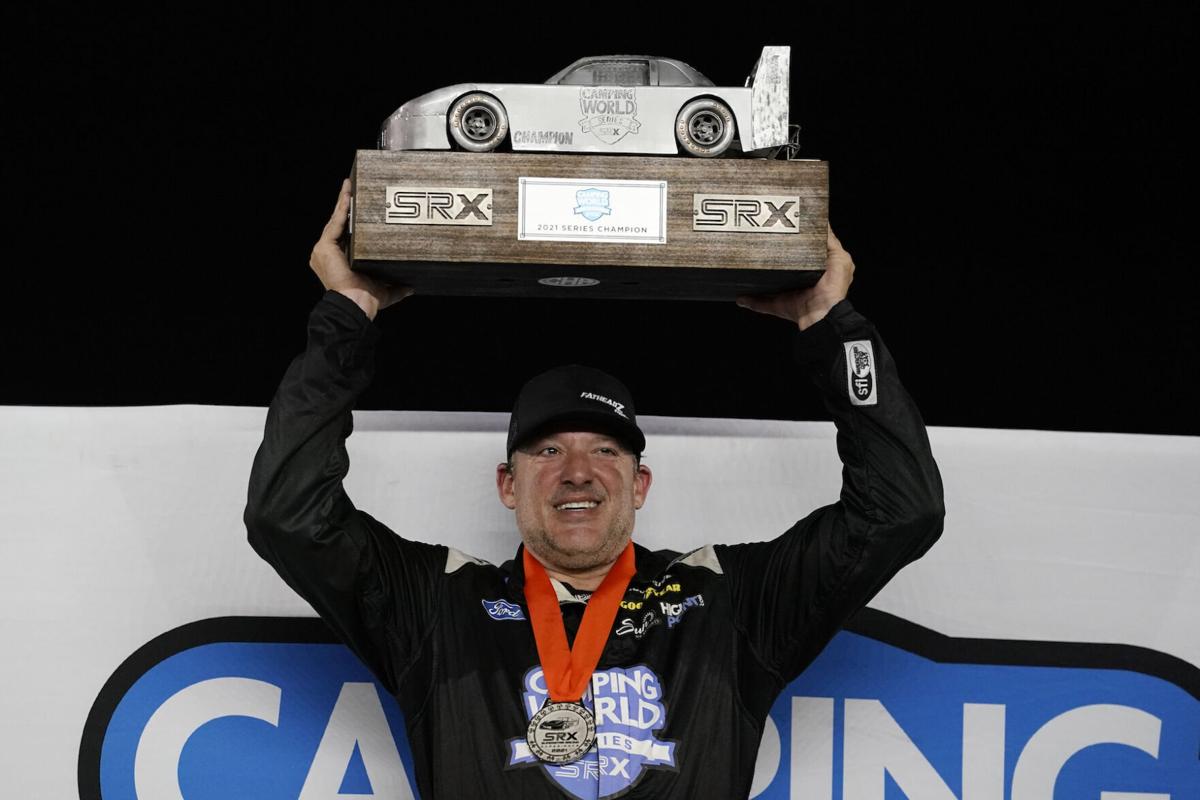 Tony Stewart holds the SRX 2021 trophy after a race on July 17 in Nashville. The NASCAR Hall of Famer is expected to announce plans for a new NHRA drag racing team on Thursday. 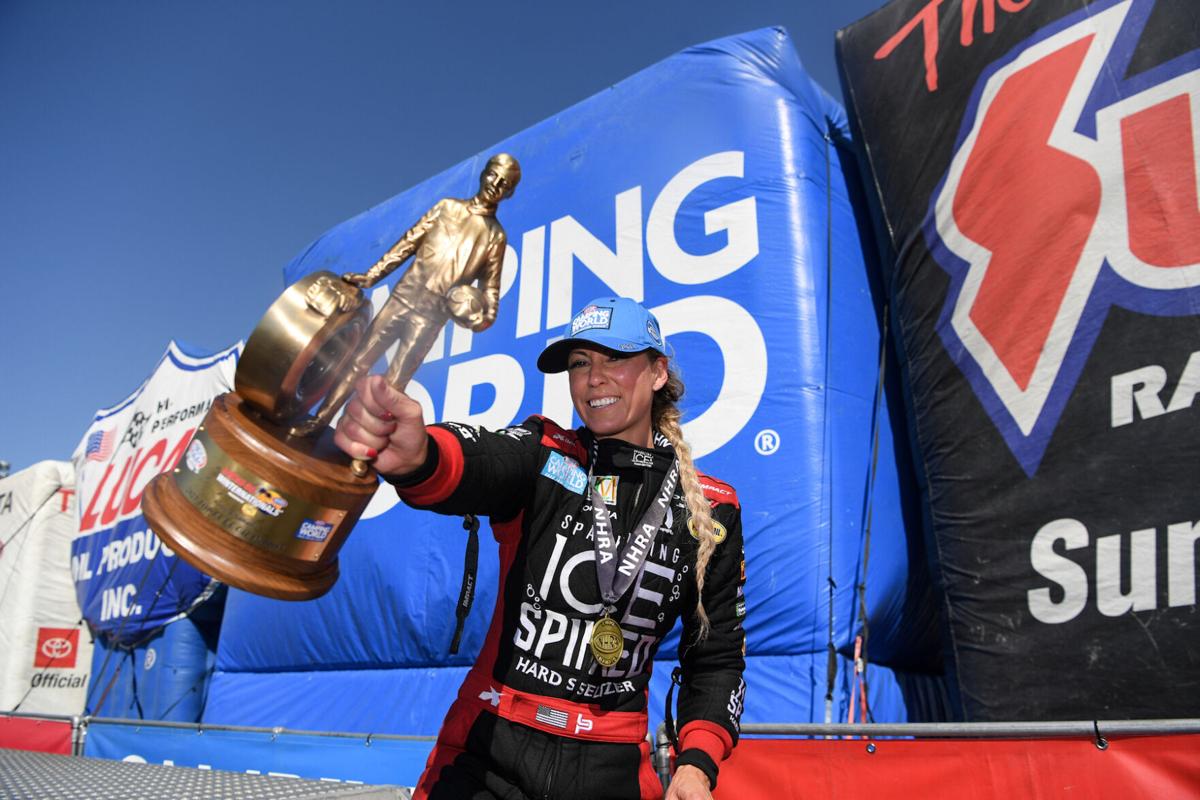 Leah Pruett shows off her trophy for winning the Top Fuel category at the 2021 NHRA Winternationals race at Pomona, California. 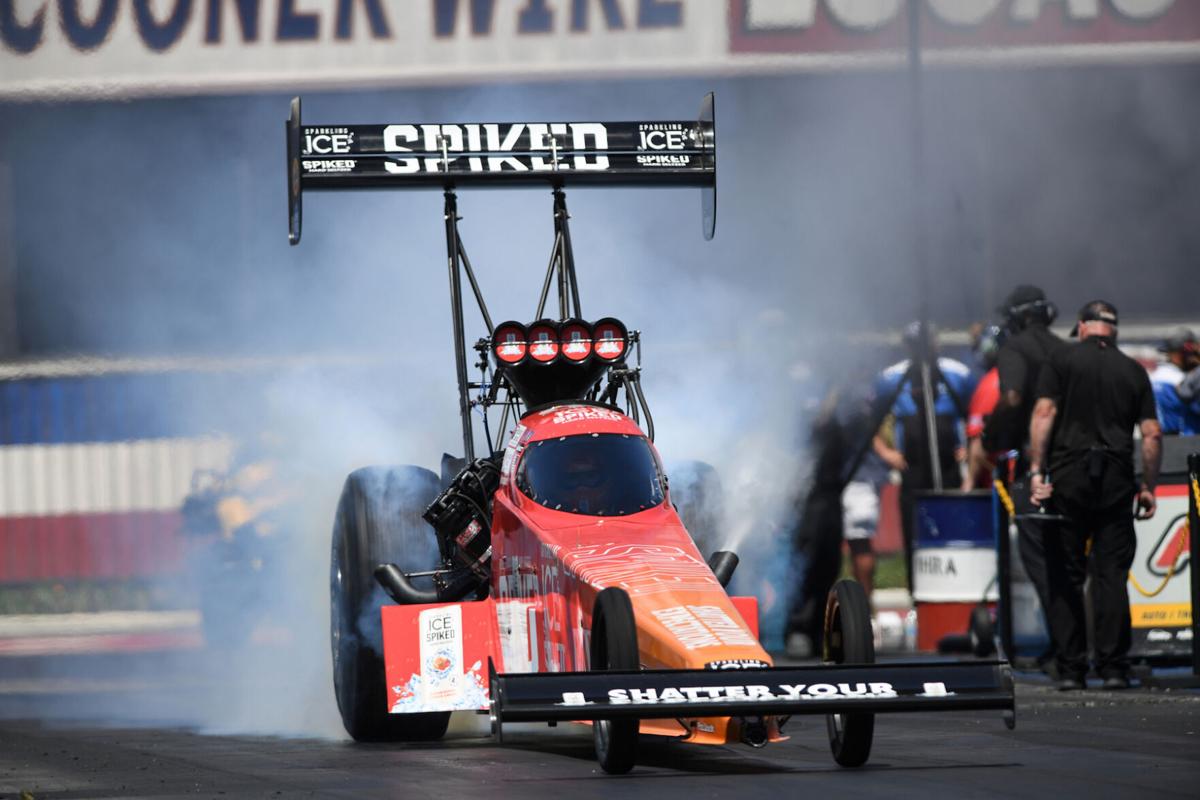 Leah Pruett does a burnout in her Top Fuel dragster on her way to winning the 2021 NHRA Winternationals race at Pomona, Calif.

Tony Stewart holds the SRX 2021 trophy after a race on July 17 in Nashville. The NASCAR Hall of Famer is expected to announce plans for a new NHRA drag racing team on Thursday.

Leah Pruett does a burnout in her Top Fuel dragster on her way to winning the 2021 NHRA Winternationals race at Pomona, Calif.

Three-time NASCAR champion Tony Stewart is expected to announce Thursday that he will become a team owner in the NHRA Camping World Drag Racing Series with his fiancée, Leah Pruett, as a Top Fuel driver.

A press conference is scheduled for Thursday morning at ZMax Dragway in Concord, North Carolina. NHRA President Glen Cromwell is slated to attend.

Pruett, currently sixth in the NHRA Top Fuel points driving for Don Schumacher Racing, was coy when asked about her plans during a Tuesday Zoom call to promote this weekend’s NHRA Thunder Valley Nationals at Bristol Dragway.

“I can’t say what the future holds. I know as silly season comes to an end, all the teams will be able to announce re-ups, renewals and things like that as things get closer,” Pruett said. “Right now, it’s just wrapping up our DSR car with (sponsor) the Sparkling Ice Spike. We’ve got big things coming up for Dodge the last two races. That’s what we’re focused on.”

Stewart, a former IndyCar champion and a 2020 inductee into the NASCAR Hall of Fame, is the co-owner of Stewart-Haas Racing in the Cup Series with drivers Kevin Harvick, Cole Custer, Aric Almirola and Chase Briscoe. His team has two championships, in 2011 with Stewart as driver and Harvick in 2014.

SHR also fields the No. 98 Ford in the NASCAR Xfinity Series for Riley Herbst. Stewart has 14 USAC championships and nine World of Outlaws sprint car championships as the owner of Tony Stewart Racing.

His portfolio also includes the Ollie’s All-Star Circuit of Champions and he’s the owner of Eldora (Ohio) Speedway. He is the co-founder of the Superstar SRX Series and its first champion in 2021.

Stewart’s interest in drag racing coincides with his relationship with Pruett. She accompanied Stewart at the Frank Hawley School of Drag Racing in December where he made runs in Super Comp and Top Alcohol cars. He drove Pruett’s car at a private test at Las Vegas in April.

The new Stewart team is expected to field cars in both the Top Fuel and Funny Car classes. Another major drag racing star is expected to be announced as driver in the near future.

Royce Peters served as crew chief for grandson Brayden Goddard during his rookie campaign at Kingsport Speedway. On Saturday night, the roles were reversed and Peters drove his No. 42 Chevrolet to the win in the Mod Street feature at Lonesome Pine Raceway.

Tricks and treats and racing were on tap at Lonesome Pine Raceway on Saturday night.

Local racers Jensen Ford of Johnson City and Vic “The Thrill” Hill of Morristown are also on the list. So is current NASCAR points leader Kyle Larson, who could be making his first-ever start at the Bulls Gap track.

The most popular event at Kingsport Speedway takes place Saturday night when the Tour of Destruction — described as racing meets demolition derby — visits the track.

The events include a chain race, flag-pole race and a reverse race along with Monster Trucks, a demolition derby and a school bus race.