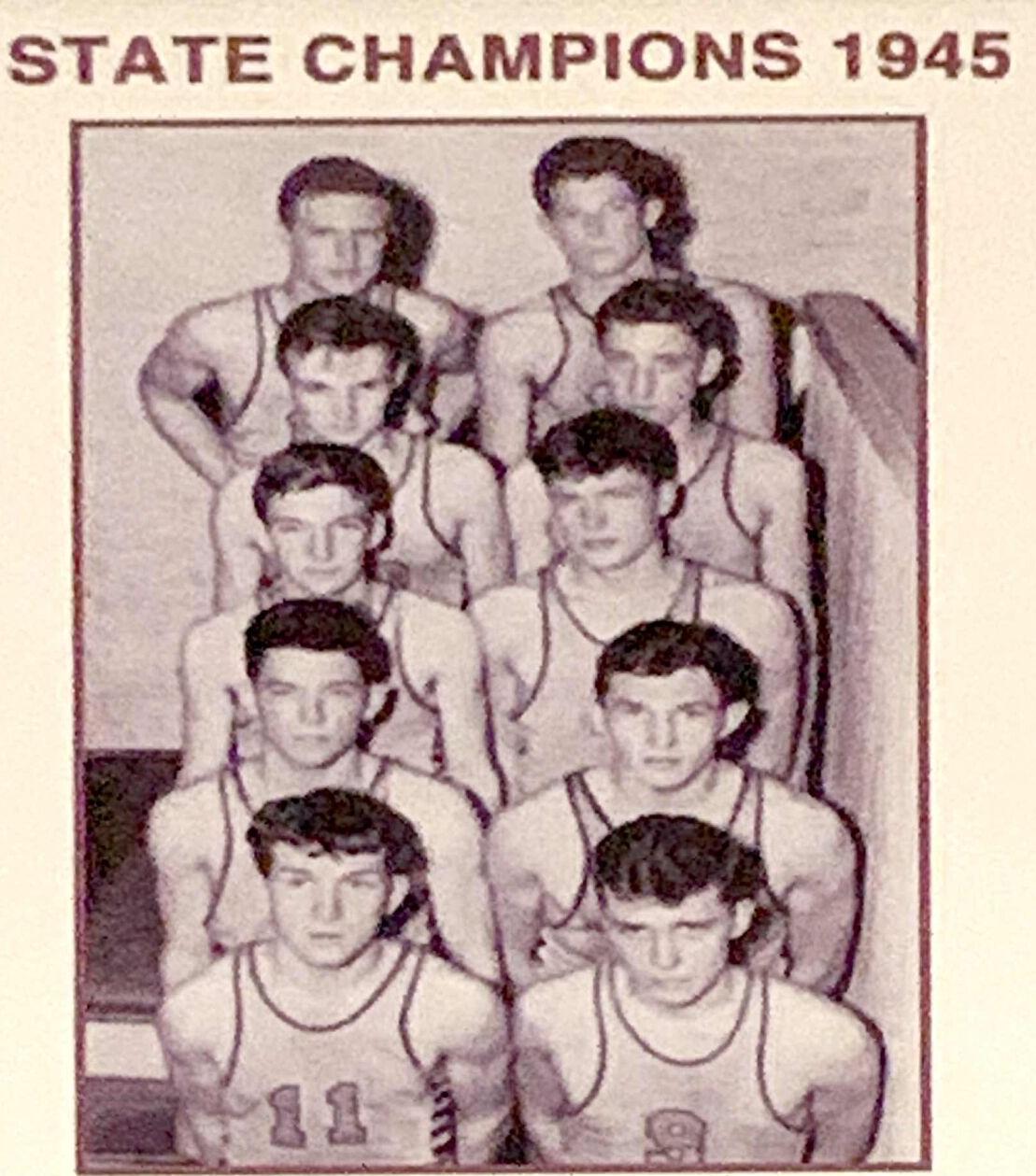 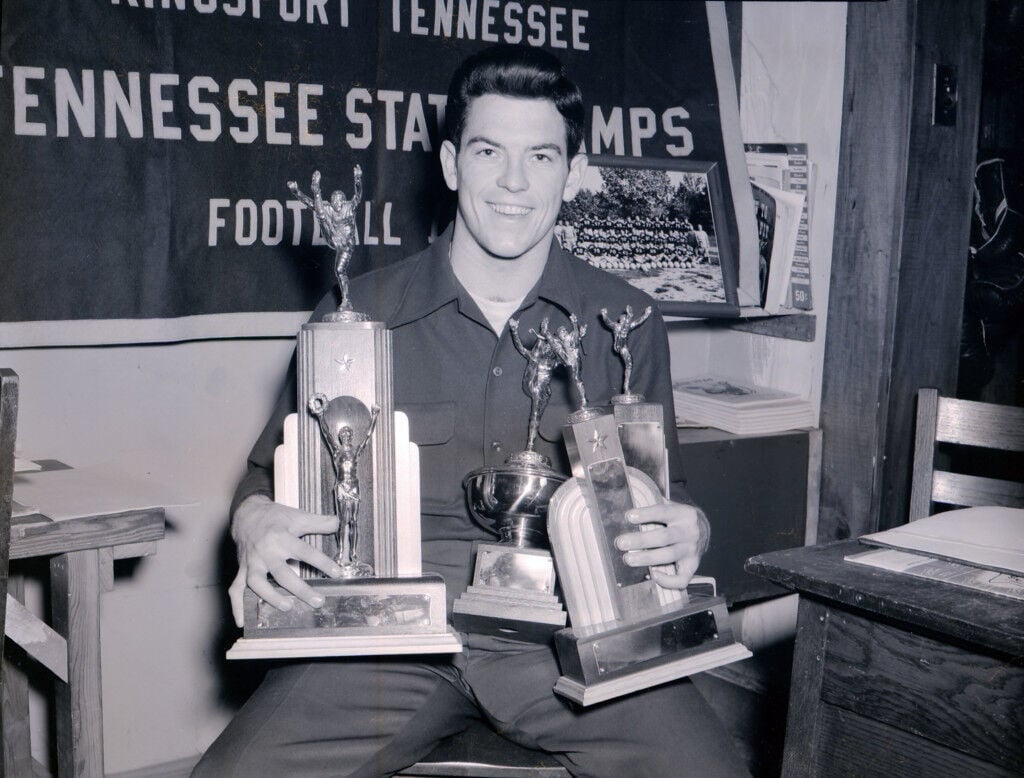 Dobyns-Bennett’s Cecil Puckett led the Indians to the 1945 state basketball championship. He was selected as the tournament MVP, scoring 53 points in three games in Nashville. 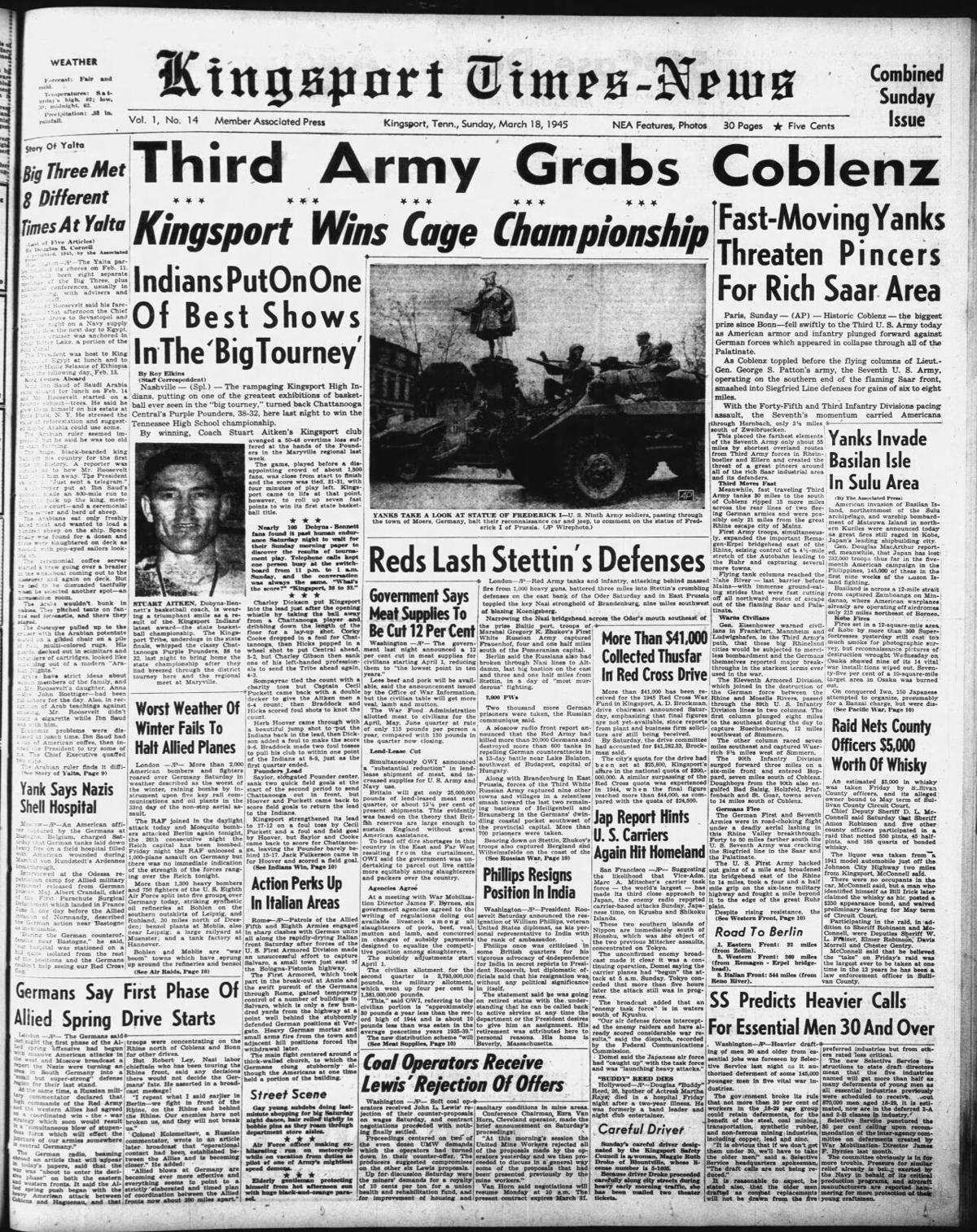 The front page of the Kingsport Times-News on March 18, 1945 indicating that the Dobyns-Bennett Indians had won the state basketball championship over Chattanooga-Central, 38-32.

For one of the country’s all-time winningest boys basketball programs, Dobyns-Bennett’s 1944-45 season still stands as a special one.

The Indians, behind the brilliant scoring of Cecil Puckett and total team chemistry, triumphed over Chattanooga-Central to claim the first and only state title in school history.

The following fall, the Tribe football team matched the feat with an unbeaten season and a state championship.

Life was good in Kingsport during those times, even if the country was in the midst of World War II.

“We weren’t expected to do much at the start of the season,” Kenneth Bingham, a senior on the basketball team said. “The teams before us had had trouble getting out of the district tournament, much less the regional tournament. It was really hard to get to the state back then with teams from Knoxville, Chattanooga and all of East Tennessee.”

MAN AT THE HELM

Of all the great coaches to come through the coaching ranks at D-B — Buck Van Huss, Guy B. Crawford and LeRoy Sprankle — Stuart Aitken is the only one that can say he was a state champion.

Aitken took over for the legendary Sprankle in the 1943-44 season and finished with a 17-5 record, runner-up in the Big 5 conference and District 15 tournament champs, but they failed to make the state tournament.

The drought for the Indians of reaching the big dance was long; they had not made it since the 1929-30 season.

Aitken coached at D-B for just three years and left with a 49-14 record.

“Coach Aitken actually was not part of the school system. I think he worked at the foundry,” Bingham said. “He was more or less an interim coach that lucked into the job before they found a permanent one, but he’s probably one of the best coaches that D-B has ever had. Coach Sprankle had left to take a job in Florida the year before.”

Many people from the early era of D-B athletics put Puckett — nicknamed Chief — in a class with Bobby and Ed Cifers.

There was even talk of trying to call him “Bobby” to mimic the tradition of D-B legends Dodd, Cifers and Peters, at least according to the Kingsport News of the day.

Puckett was also a star on the football team, making the all-state and all-Southern team twice each. He also was a standout in track and field and baseball, holding the school javelin record for many years before the event was discontinued in high school.

He later attended both the University of Mississippi on a football scholarship and East Tennessee State, earning bachelor’s and master’s degrees. He would serve mostly as a physical education teacher in the Kingsport City Schools system, football coach and assistant principal.

Puckett was regarded by his peers as one of the most genuine people you could ever meet. He passed away in 2017.

“Cecil was our horse,” Bingham said. “Everything he did, he did it pretty well. He was a great football, basketball and baseball player. He was pretty good in track, too.”

A sophomore, Puckett, along with teammates like Cecil Maddox, brothers Kenneth and Bob Bingham Sr. and Jack Fulkerson, started off the season on a high note, beating county rival Blountville 50-17.

Puckett scored 14 of the team’s points, and he averaged about 15 for the season.

“We had a good team, but we weren’t championship quality,” Bingham said. “Coach Aitken was a really good coach, and we had some good chemistry. Back then, everyone lived pretty close together within the city, and we walked to school together.”

The Tribe had a tough time journeying to Knoxville on the weekend of Jan. 6. D-B’s unbeaten record was smudged with back-to-back losses to Knoxville High (31-26) and Maryville (37-30).

“We played both of those games on the same day, and we were really tired during that second game,” Bingham said.

D-B met Elizabethton in the first Big 5 matchup of the season on Jan. 9 and whipped the Cyclones, 44-30. Puckett led the charge with 10.

“Back before the war, the basketball team would go down to play a few games in either Florida or in the Bahamas as a reward during the holidays,” Bingham said. “That all stopped during the war, and we played fewer away games during those years.”

D-B earned conference runner-up honors to Science Hill, which defeated the Indians twice in the season (30-27 and 30-29) finishing out the league slate 8-0. The Hilltoppers were rated as the best team in the region.

The Indians entered the District 15 tournament with a 15-5 record.

After storming through Holston High 46-25, the Tribe met Holston Valley in the semifinals.

The Indians went on to defeat Sullivan High in the finals and claimed a second consecutive district tourney title.

Up next was the much tougher regional tournament in Maryville.

The first opponent for the Indians was a tricky one in unbeaten Doak High (24-0) out of Greene County. D-B rallied from a two-point halftime deficit to win 36-34 thanks to a Fulkerson bucket with just over a minute to go.

Sparked by the sharpshooting Puckett’s 19 points, the Indians defeated Knox-Young 39-25 to advance into the semis against the 32-0 Hilltoppers.

“That was the game,” Bingham said. “Johnson City was undefeated, but we had gotten close to beating them a couple of times that year.”

D-B was finally able to dispatch the Hilltoppers in a 44-31 victory behind Puckett’s 12, but faced the Chattanooga Central Purple Pounders.

“We probably played our best game of the year against Johnson City, but we were tired for that next game,” Bingham said.

The marathon game lasted four overtimes, with the Pounders coming out on top 50-48, but the Indians had earned a berth in the state tournament for the first time in over a decade.

“We played Chattanooga that evening after we beat Science Hill in the afternoon,” he said. “I can’t remember much about that Chattanooga team, but I do remember they had a good big guy and a good little guy.”

The Indians were almost an afterthought going up against perennial powerhouses like Linden, Nashville West, Paris-Grove, McMinnville, Savannah, Chattanooga-Central and Flintville in the eight-team field.

“It was very strange going down to Nashville,” he said. “We played at Vanderbilt, but we didn’t play where they play now. It was still like it is now with the raised floor, though.”

The Tribe matched up with McMinnville — runner-up to Nashville West in the Middle Tennessee regional — and easily took down the Bulldogs 53-28 in the opening round.

Puckett was brilliant again with 22 points, and D-B moved on to face Savannah.

Puckett powered the Indians to a 49-37 victory with 19, and they found themselves in the finals against Chattanooga-Central.

“We saw the game when Chattanooga had beaten Nashville West, which we thought was the best looking team,” he said. “There’s no telling if Chattanooga came out of that game tired and we just got them at a bad time. We’ll never know.

“Our starting center (Paul) Clode had emergency appendectomy surgery the night before and didn’t get to play in the championship game, but it ended up working out for us.”

With four minutes left to play, the game was tied at 31, but the Indians rolled up seven straight points to take out the Purple Pounders 38-32.

“It was a great feeling being able to win, especially coming into the season with not many expectations,” Bingham said. “We were a pretty close bunch, and it’s nice to be remembered as the only team to win a state championship.”

Puckett was named tournament MVP after he racked up 53 points in three games for the Indians.

According to the Kingsport Times-News reports, one caller occupied the switchboard at the newspaper office from 11 p.m. to 1 a.m., keeping the news staff informed of the score.

The Indians shared the front page of the combined Sunday edition with the U.S. Third Army’s seizing of Coblenz in France from the German army.

D-B finished the season with a 23-6 worksheet.

Since that magical season, the Indians have had much success on the hardwood but have been somewhat snakebitten.

“Some of those teams under Guy B. Crawford were so much better than us, and we were definitely pulling for them to win,” Bingham said. “There aren’t too many of us left, and it’s still kind of nice being the only state championship team.”