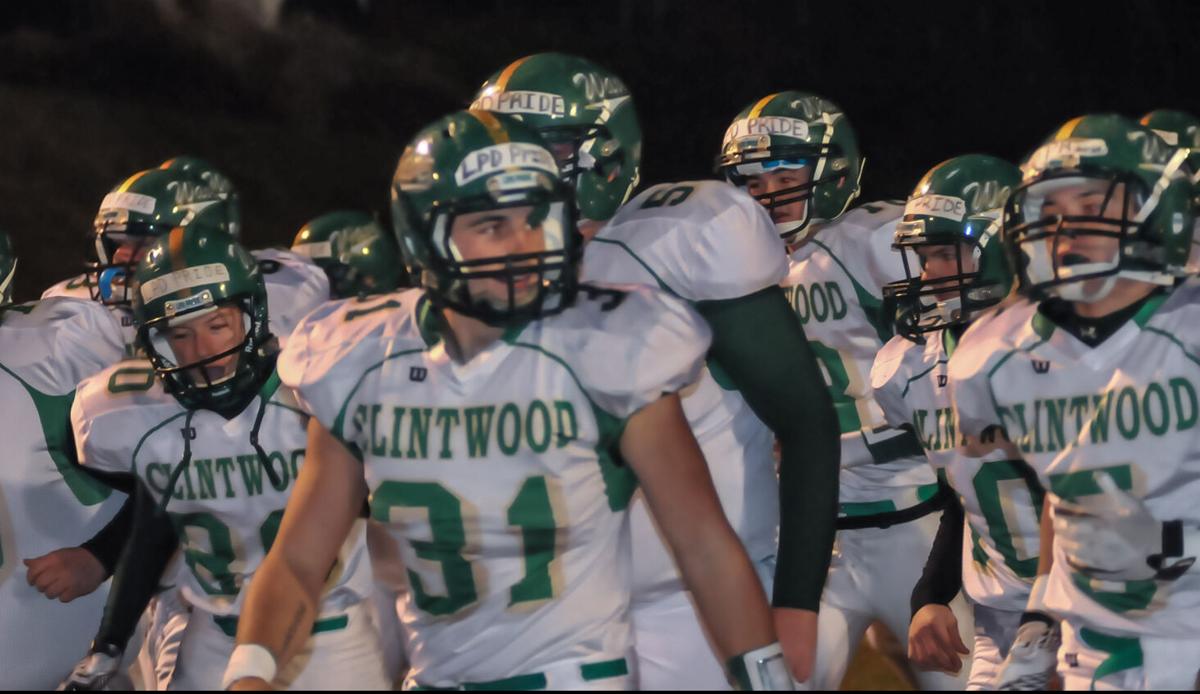 Players for the 2011 state champion Clintwood Greenwave showed their ‘LPD Pride’ on their way to winning the final title by an LPD football team. 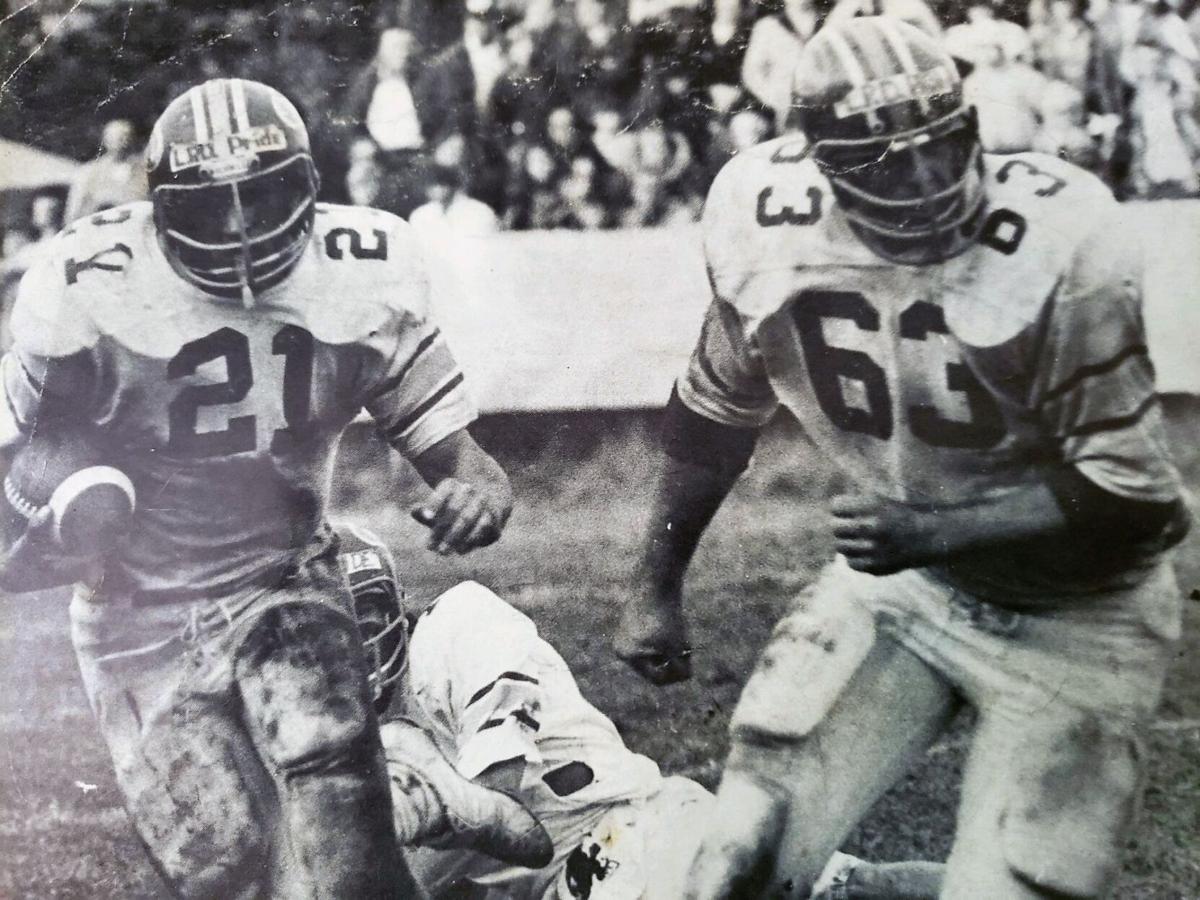 Wearing 'LPD Pride' on football helmets was a longstanding tradition at Clintwood. Greenwave greats Johnny McFall, left, and Yogi Mooney did it during the team's heydays in the 1970s.

Players for the 2011 state champion Clintwood Greenwave showed their ‘LPD Pride’ on their way to winning the final title by an LPD football team.

Wearing 'LPD Pride' on football helmets was a longstanding tradition at Clintwood. Greenwave greats Johnny McFall, left, and Yogi Mooney did it during the team's heydays in the 1970s.

One word can describe the former Lonesome Pine District.

When it came to small school sports in Virginia, the LPD enjoyed more than its fair share of success in the latter part of the 20th century and the early part of the 21st.

From the start of the VHSL’s modern-day format in 1970 to the dissolving of the storied district in the spring of 2013, LPD teams enjoyed 69 state championships and 60 state runner-up finishes across 13 team sports, not to mention the number of state titles won by athletes in individual competitions.

Of the 14 team sports in which LPD members competed, the district had a state champion in 12 of them.

Like the rest of Southwest Virginia, football was the premiere sport in the LPD and it showed.

Six schools from the district won state football titles and a seventh, Pound, was a state runner-up.

The LPD totaled 21 state titles in the sport, eight by Powell Valley, including seven under coach Phil Robbins.

“It was a ‘be ready to play each night’ league,” Robbins said. “There was solid coaching and coaching staffs. Superintendents and principals made sure they had competent coaches and staffs.”

Tom Turner was connected with all six of Appalachia’s state championships. Turner, who died in 2006, was a player on the 1971 squad and coached the Bulldogs to five state titles.

His son Travis, now the football coach at Union, quarterbacked the Bulldogs to three of those titles after battling through a rigorous LPD schedule each year.

“You had to be ready to play your best every Friday night,” Turner said. “If you won the football LPD title, you had a really good chance to win the state championship.”

Clintwood coach Rick Mullins played on the 1978 state title team under coaching legend Ralph Cummins and then guided the Greenwave to its fourth and final state title in 2011.

“The LPD was a very unique conference in that all of the schools were located in towns that had great pride in being the best and having bragging rights at least for a season,” Mullins said. “I think the original group of coaches are what laid the foundation for greatness. The LPD Coaches Association had monthly meetings and year-end banquets for families. Something that is unheard of nowadays.

“The respect for each other was truly unique and something that has been lost throughout the years.”

When his team made its run through the 2011 postseason to the final state championship won by an LPD football team, the Greenwave continued a long-practiced Clintwood tradition by wearing a piece of tape across the front of their helmets featuring the words “LPD Pride.”

Gate City was a member of the LPD in its early days before the postseason, and the Blue Devils returned to the district after becoming a Class A school in 2000.

During its six-year return, Gate City added to the LPD trophy case for the district in several sports, including football. Coach Nick Colobro directed the Blue Devils to the state title in 2003.

“The LPD was king of Group A football from its inception. Everybody had a physical, tough team,” said Al Stecker, who coached Kelly to the state title nine years after serving on the staff at J.I. Burton in 1972. “I had the honor, which I’ve never forgotten, to coach against some legends like Ralph Cummins (Clintwood), Jim Riggs (Appalachia) and others.”

STRONG IN OTHER SPORTS

The LPD was feared across the state as a football powerhouse but also produced state champions in several other sports.

J.J. Kelly returned to the state finals in 2011 under Chad Longworth but fell to Honaker and the late Tom Harding, the winningest baseball coach in VHSL history. The state championship appearance was the final game in the Kelly program’s history. The school consolidated with Pound in the fall of 2011 to form Wise Central.

Though Kelly dominated decades of LPD baseball, the district boasted other solid programs. Coeburn won the state title in 1975 and 1978 and finished as runner-up in 1995. Powell Valley won a state title in 1996 and Gate City posted a state runner-up finish in 2004.

Robin Dotson, who coached J.J. Kelly to the state crown and has since coached Wise Central to five state championships, both played and coached in the LPD.

“Pride and tradition are two things that stand out to me,” Robin Dotson said of the LPD. “Each school represented a community that took great pride in its community, its school and its kids.”

“It was very, very hard to win at the level at the time,” Jervis said. “There were so many good teams. If you came out of the LPD, to me, you were the favorite to win it all.”

Pound won the state championship in boys tennis in 1978. That was the only title in the sport for the LPD, although Burton finished second in the state six times and Kelly was runner-up in 1989.

Gate City also earned a state runner-up finish in the Blue Devils’ last year in the LPD, and current coach Scotty Vermillion regarded the district as a tough, tight-knit district.

“The pride and tradition in almost every school in the LPD was unbelievable. It truly mattered for those coaches and players. Winning was important. Loyalty was obvious,” Vermillion said. “And they all hated that we were in the district. They hated us. Which speaks of how territorial and loyal those schools were to the LPD. It was kind of a sacred pact.”

Veteran LPD basketball coach Preston Mitchell remembers how strongly competitive and loyal the district was. Mitchell coached at Pound from 1975-87 and at Powell Valley from 1996-99.

“The strength of the district lay in the kinship among the coaches. Everyone helped each other when it came time for regional and state play,” he said.

ALL GOOD THINGS MUST END

Consolidation and reclassification led to the end of the LPD.

The district folded after the spring of 2013. Class 2 schools Wise Central and Union joined the Clinch Mountain District, which later became the Mountain 7, and J.I. Burton and Clintwood joined the Cumberland District.

Clintwood later consolidated with Haysi to form Ridgeview, which joined the Mountain 7 District.

While the LPD is no more, its remnants are all around the sports landscape of Southwest Virginia and its former schools continue strong showings at the regional and state levels. And its history echoes throughout the region, regardless of the event.