East Tennessee State’s Juliun Price made his presence felt in his first serious playing time of the season Saturday. 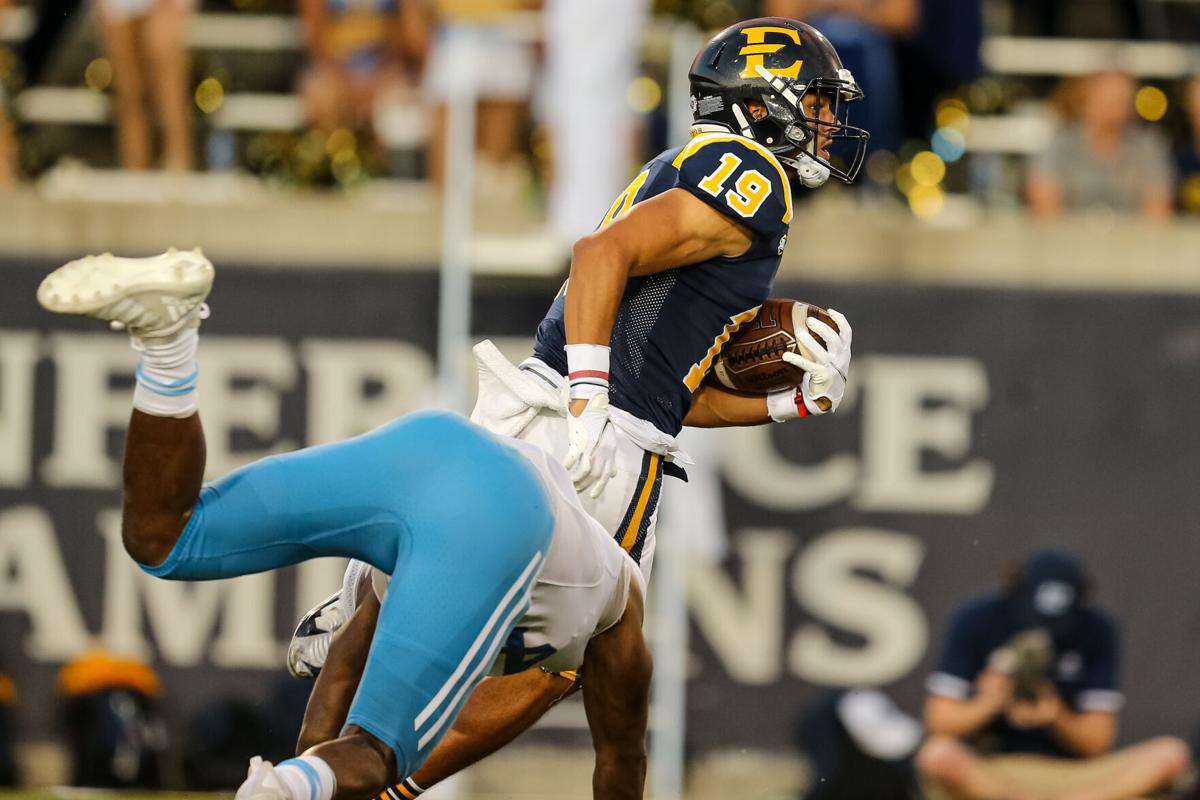 Juliun Price is back from an injury.

East Tennessee State’s Juliun Price made his presence felt in his first serious playing time of the season Saturday.

Juliun Price is back from an injury.

JOHNSON CITY — Juliun Price is back in the lineup, and the East Tennessee State football team is better off for it.

The speedster from West Greene High School missed the first four games with an injury and then played sparingly in the fifth.

He made up for lost time in the sixth game, a 48-21 victory over The Citadel on Saturday, catching five passes for 78 yards.

“I didn’t realize I had five catches; I was just trying to play,” Price said. “I want to do what I do. To come back from an injury for them to have confidence in me to throw the ball to me just shows a lot.”

The Bucs wasted little time in going to their returning weapon. Tyler Riddell hit Price for 20 yards on the first play of the game.

“It felt amazing,” Price said. “But I’m being honest. I really feel like I should have just turned upfield and scored. I just wanted to make the catch. It felt amazing for them to throw the ball to me on the first play. It shows a lot of trust.”

With a game at Chattanooga on the horizon, Bucs coach Randy Sanders is glad to have another weapon in the arsenal.

“It was nice to get him back,” said Sanders, whose team is 6-0 and ranked 10th in the national FCS polls. “All season I talk to guys — ‘You get in the training room. You try to get better. If somebody in front of you can get better, next man up.’ And I think we’ve had a number of guys step up and do a good job in that instance.

Price was the second-leading receiver on the team in the spring, and his 59-yard reception was the longest of the season for the Bucs. When the fall season began, he was out with an undisclosed injury.

Isaiah Wilson, who is tied for the team lead with Huzzie and Murray with two touchdown catches, missed the last game with an injury. Price, a 6-foot-2, 185-pound former all-state decathlete, filled in and the offense didn’t miss a beat.

“It’s definitely a competition there,” Price said. “The next person up is going to be just as good as you. Every day you have to come, you have to compete, and you have to be on top of your game.”