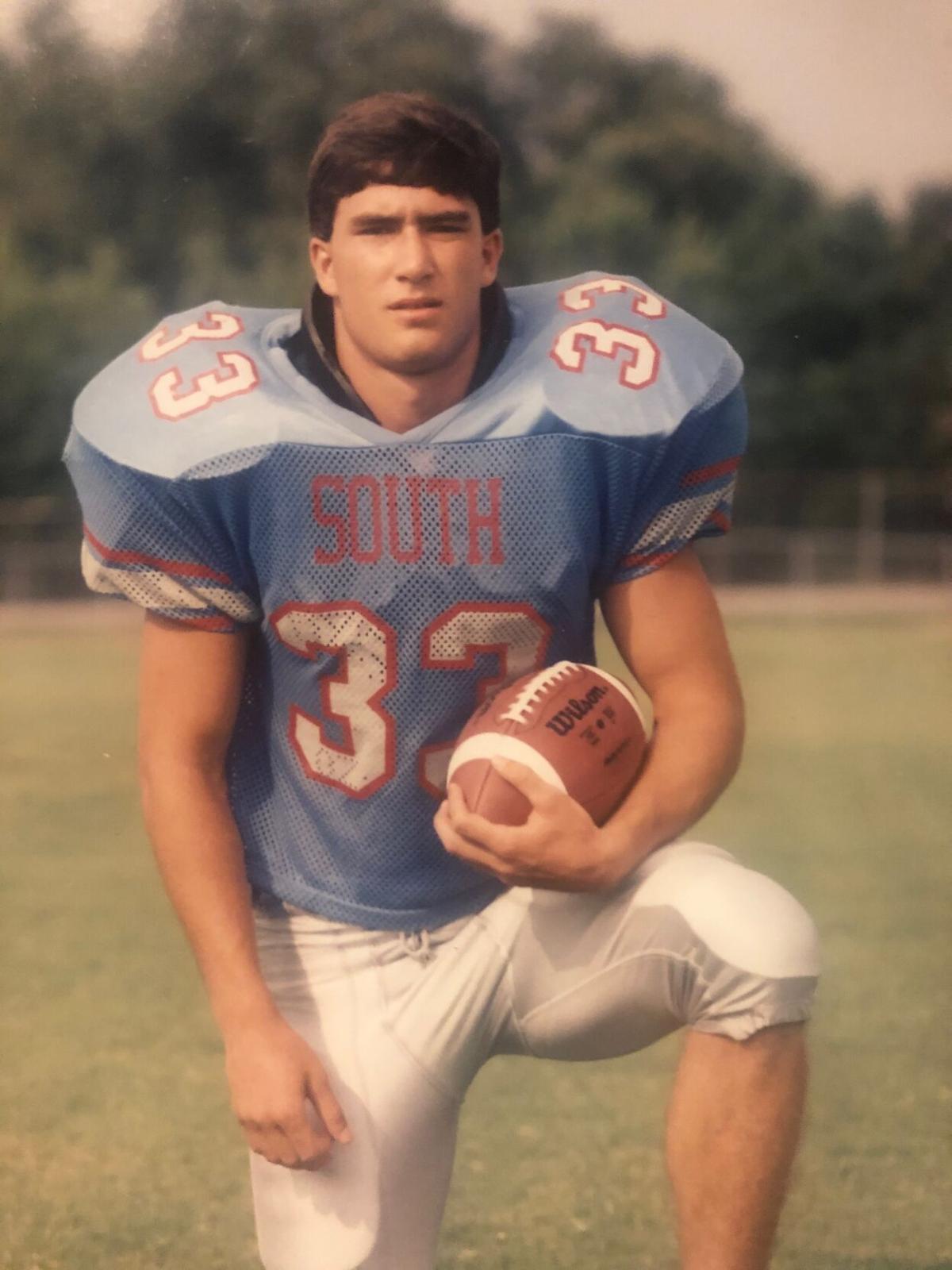 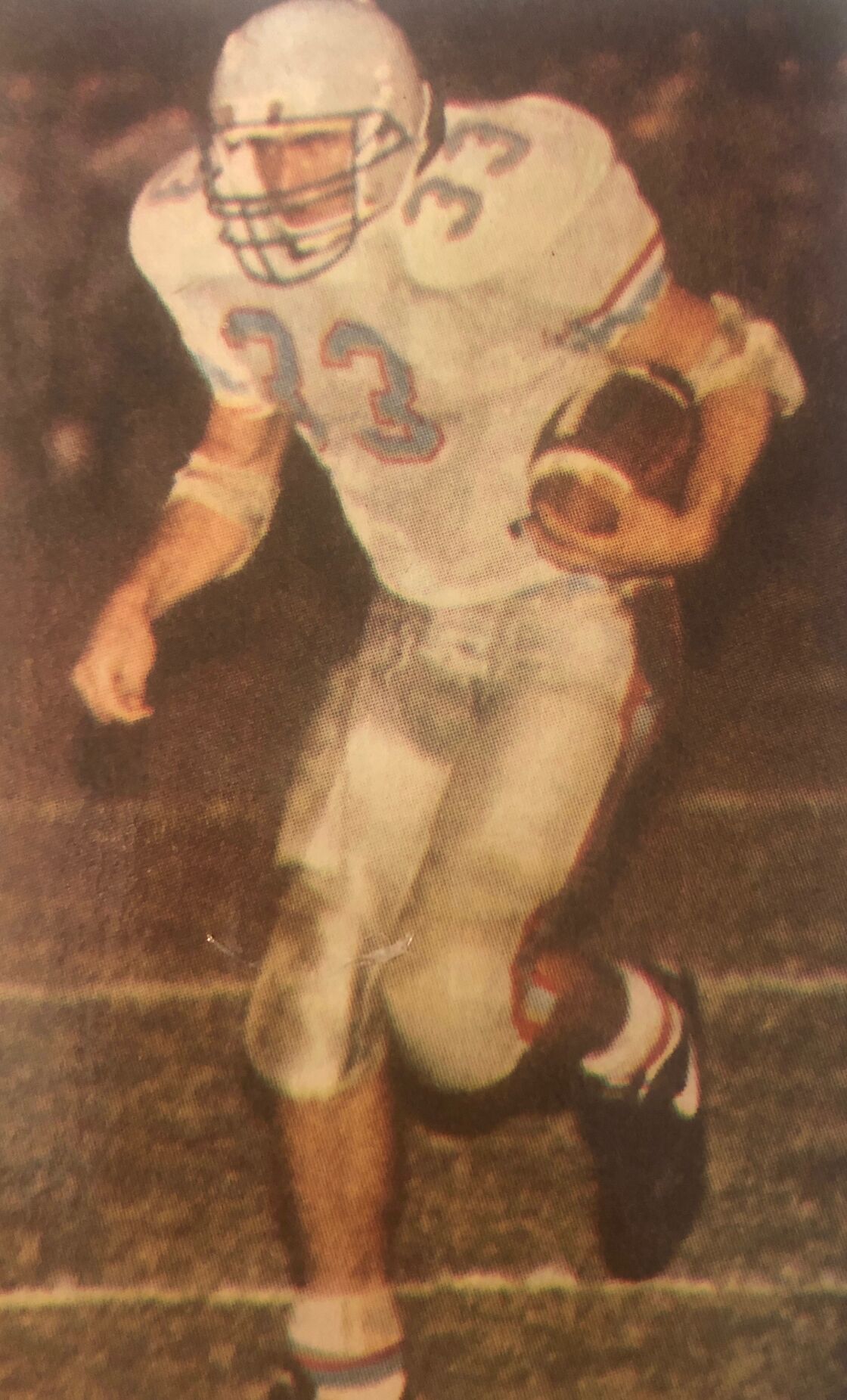 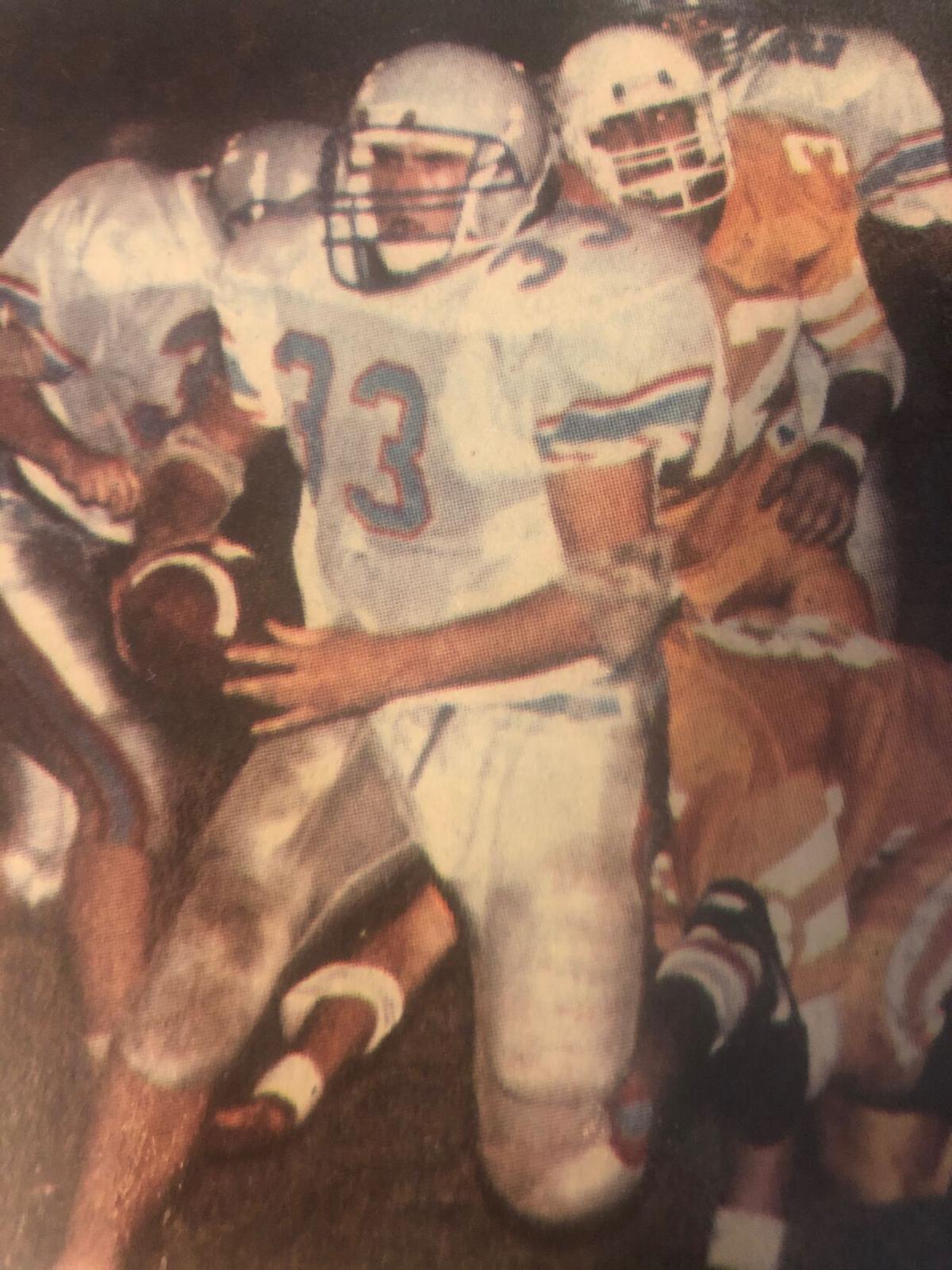 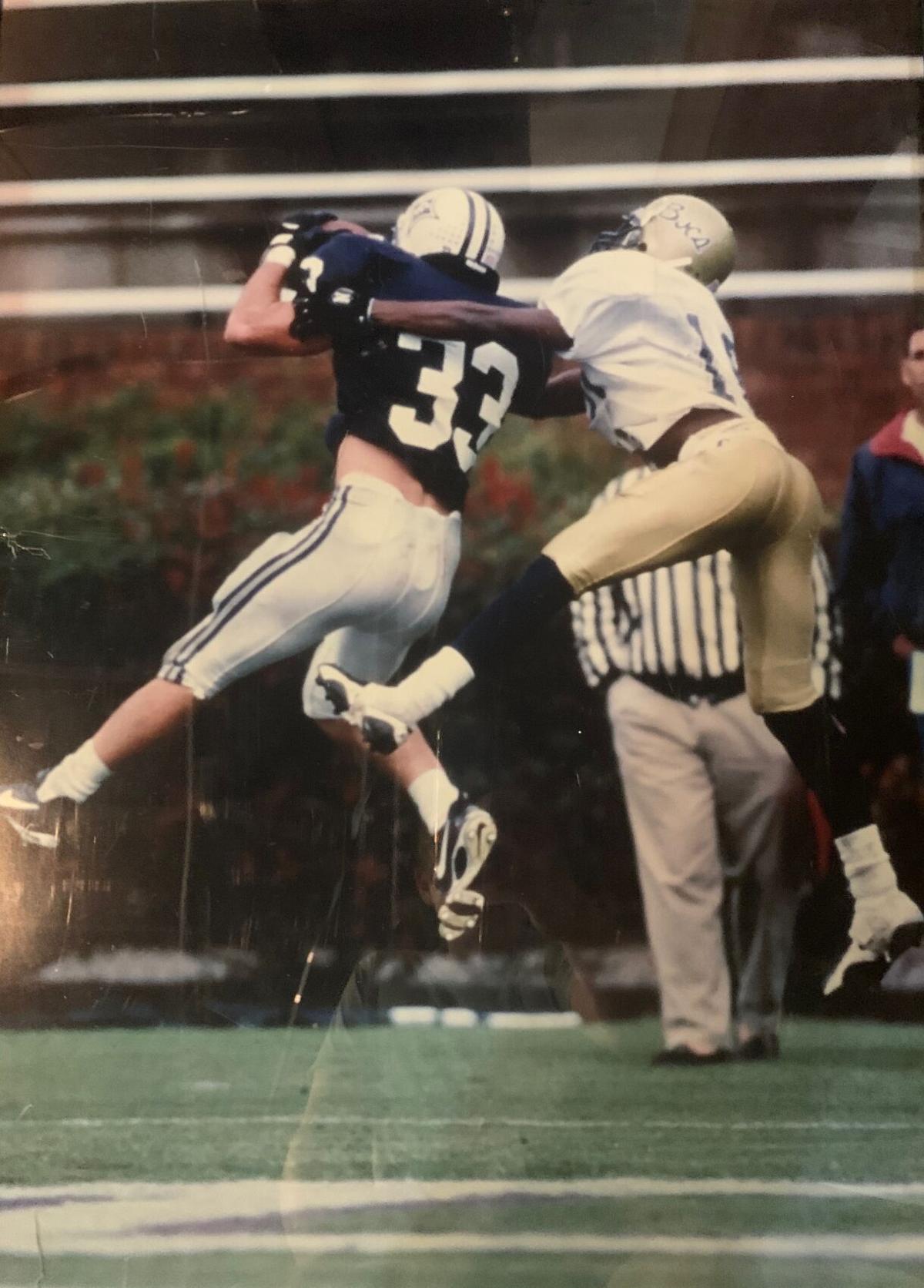 KINGSPORT — Sullivan South has had a rich football history throughout its 40-year existence.

The first real taste of sustained success for the Rebels came in the early 1990s, and some of the key victories in that stretch were thanks to all-state running back Jeremy Osborne.

During Osborne’s three years on the team, toting the pigskin in Colonial Heights, South didn’t lose at home in the regular season. When Osborne graduated in 1994, he left as the school’s all-time leading rusher and all-time leading scorer.

He accumulated more than 2,000 yards and earned a scholarship to continue his career on the gridiron at Furman.

“The community support that we got at South was second-to-none,” Osborne said. “South had always had a successful athletics program, and along with guys like Ralph Nelson and Sam Haynie, we were just able to build on that success.”

After John Allen Compton retired prior to the 1990 season, Mark Smith took over and the Rebels sputtered to a 3-7 record.

It was the first losing season in South history, but things quickly turned around when Osborne joined. The Rebels were beaten 44-0 in a rivalry game with Dobyns-Bennett at J. Fred, which was the first contest either team had won by more than two scores.

“Coach Smith was a very defensive-minded coach,” Osborne said. “He believed that if we got up two or three scores, he’d turn it over to the defense to get the job done. We were a run-oriented team and didn’t score too much back in those days.”

The following season, South went from being in the cellar of the Big 10 to winning the conference and finishing the regular season 10-0.

That included a 30-0 shellacking of D-B, which was the first time the Indians had been shut out since the 1986 state playoffs against Knox Halls.

“That was a very convincing win,” Osborne said. “Death Valley was packed and we set the tone from the beginning. Both times we beat D-B at home were big deals at the time.”

Osborne remarked that having guys like Haynie and Nelson to run behind was what made the Rebels so successful.

“Those two guys were on another level simply because of their size and how well they moved for their size,” he said. “We had good offensive lines the entire time I was at South.”

Even though the Rebels were an impressive 29-1 in the regular season from 1991-93, the playoffs were a different story.

South was ousted from the Class AAA first round in Kingsport in Osborne’s sophomore and junior year in close games by Greeneville in 1991 (14-13 in overtime) and by Cocke County in 1992 (20-6).

“That game against Cocke County was rough,” he said. “They stuffed the run every single time on us and we had to go to the pass. I think we threw like six interceptions that game.”

Osborne and the Rebels had big goals for the 1993 season, being the returning conference champs and having something to prove in the playoffs.

“The game against Greeneville that year was all hyped up to be Dustin Moore against Jeremy Osborne and it was a physical battle,” he said.

The Rebels won some close games over the Greene Devils (9-7) and at Elizabethton (24-17), but still rolled through the regular season unbeaten at 10-0.

“The D-B game where we won 33-7 was almost a carbon-copy of my sophomore year,” he said. “That was also the last time South beat D-B and I’ve been reminded of that quite a few times over the years.”

The Rebels had a Class 4A first-round bye but met Powell in the second round and won 10-7. Up next was a familiar foe in Cocke County.

“That was a very physical game,” Osborne said. “I scored the winning touchdown late in the fourth quarter with like two minutes left and we ended up winning 6-0. Then we ran into a very talented Cleveland team and lost (21-0).”

Osborne was set on going to Furman and being an engineer, but he had plenty of other offers from most of the Southern Conference schools.

“I was in talks with (East Tennessee State) early on, but I was set on engineering,” he said. “Wofford wanted me to come and play running back, but Furman recruited me as an athlete. When I got there, I never even practiced on offense and was a full-time defensive back.”

PLAYING IN THE PURPLE

The Paladins — under Bobby Johnson at the time — were less than a decade removed from the 1988 FCS national championship, but had not been to the playoffs since 1990.

Osborne ended up being a two-time second team All-SoCon defensive back and making the first team his senior year in 1997.

His career stats included 269 career tackles (178 unassisted) and five interceptions. He led the team in picks in 1995 with three and was elected captain his senior year.

However, most of his biggest moments came in the 1996 season.

“That was the first time that Furman had been to the playoffs in a while and we played Northern Arizona in that first round two days after Thanksgiving,” he said. “There must have been two feet of snow out in Flagstaff, but thankfully we played in a dome. We scored two late touchdowns to win, but we were rewarded with a trip to Huntington, West Virginia.”

“We had actually played Marshall in the regular season because they were still in the SoCon and we were ahead at halftime,” he said. “But they had an interception return and pretty much blew the game open.

“In the playoffs, they were ready for us. We knew how good Moss was and I wasn’t specifically matched up against him, but we rolled our coverage towards him and had to know where he was at all times.”

So, did Osborne get “Mossed”?

“Yeah, I did show up in that documentary ESPN had a few years ago on him called ‘Rand, West Virginia’ and in that playoff game, I was trying to defend a pass that he ended up catching,” Osborne said. “My friends were quick to point that out when it came on. I always tell people that he was hands down the best I’ve ever played against. He was so different and so fast.”

The Thundering Herd won that game over Furman 54-0 and would end up going 15-0, winning the FCS national championship.

Furman finished out the season 9-4.

BACK AT THE MINI-DOME

In the four years that Osborne played for the Paladins, his record against ETSU was 2-2 and he won once in the Mini-Dome in 1996.

“In 1996 was when us and ETSU both went to the playoffs, so that was pretty cool,” he said. “I always had a big contingent whenever we played in Johnson City and in my freshman year, they were down close to the front row and they were yelling, ‘Put Osborne in!’ My position coach just looked at me and asked if they were with me.

“What I also found cool at that time was that Sam (Haynie), Jim Beverly (Sullivan North) and Travis Crusenberry (Sullivan Central) all made up a good portion of that offensive line for ETSU back in the day and here I was another Sullivan County kid lining up on the other side of the ball.”