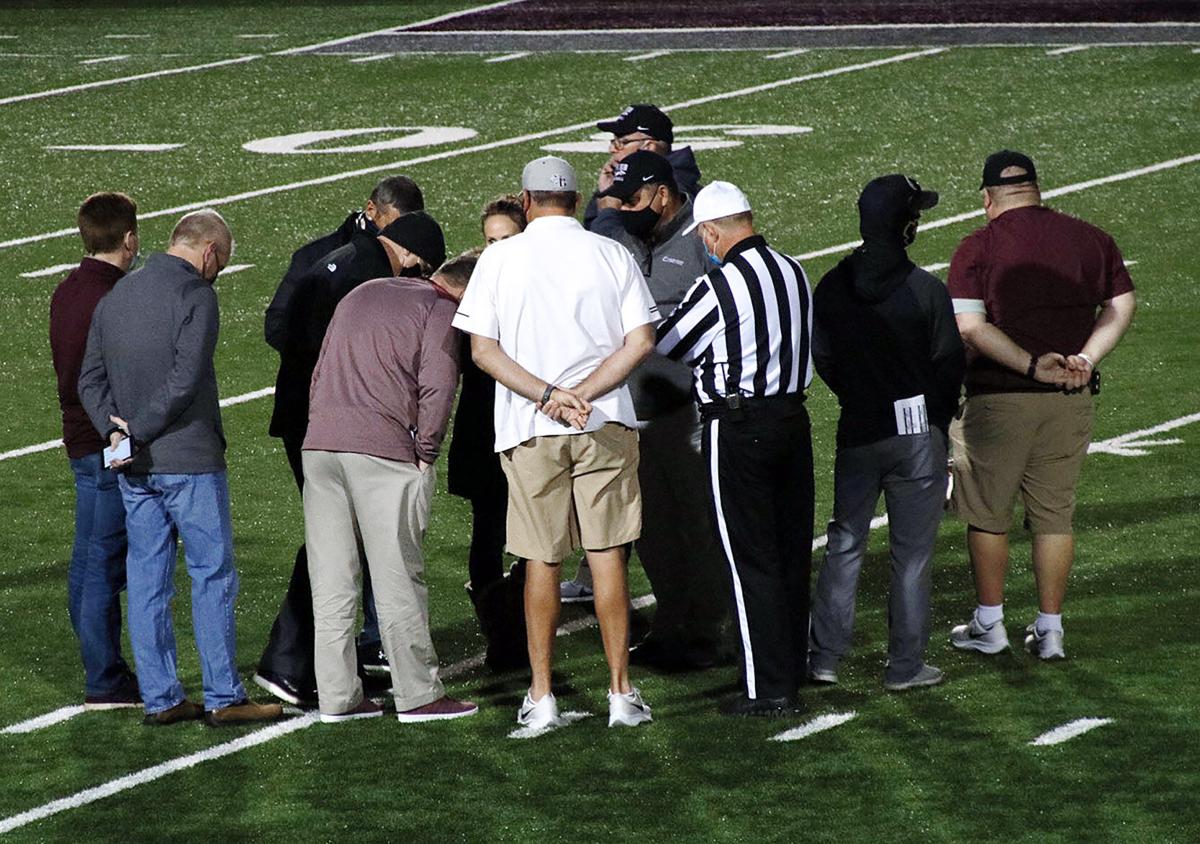 Officials, coaches for Dobyns-Bennett and McMinn County and other personnel meet at midfield Friday night at J. Fred Johnson Stadium in Kingsport to discuss whether to play the 6A playoff game because of a coronavirus situation. 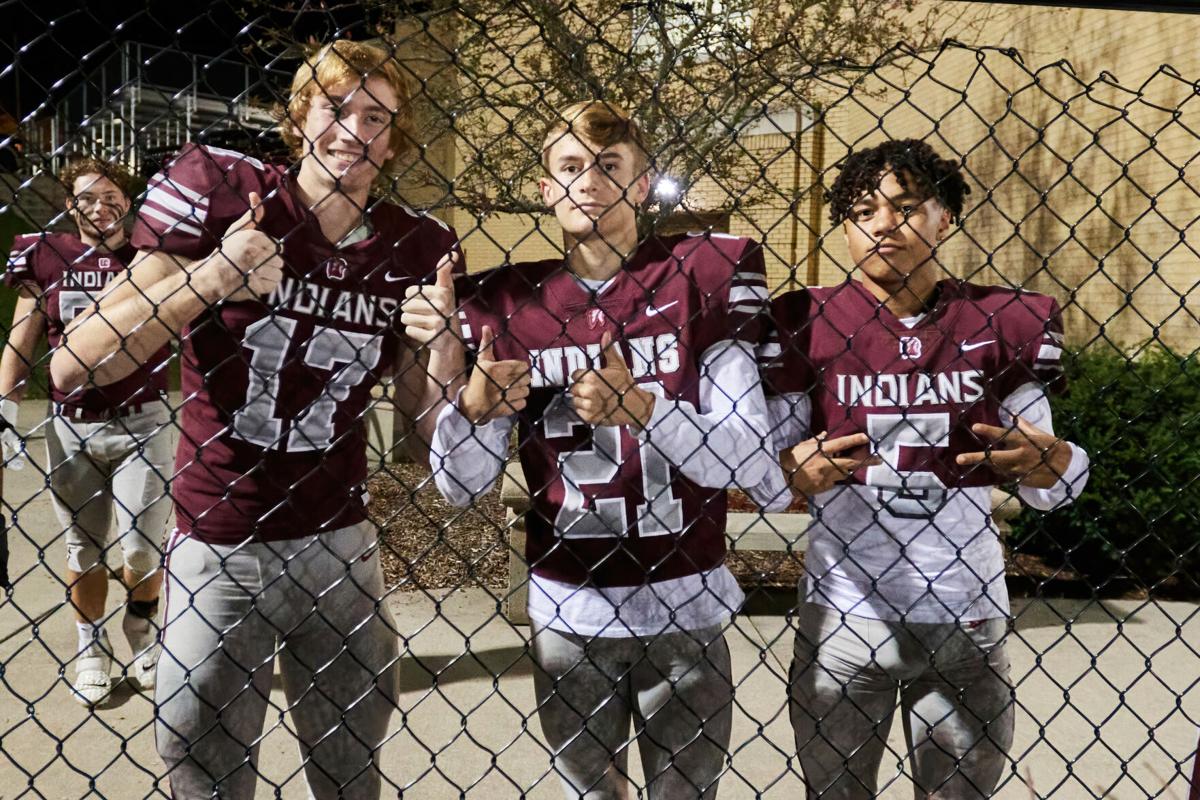 Dobyns-Bennett’s Braden Marshall (17), Hayden Russell (21) and Jonavan Gillespie (5) look down from the fieldhouse as school officials from D-B and McMinn County discuss a coronavirus situation during the second round of the Class 6A playoffs at J. Fred Johnson Stadium on Nov. 13 in Kingsport.

Officials, coaches for Dobyns-Bennett and McMinn County and other personnel meet at midfield Friday night at J. Fred Johnson Stadium in Kingsport to discuss whether to play the 6A playoff game because of a coronavirus situation.

Dobyns-Bennett’s Braden Marshall (17), Hayden Russell (21) and Jonavan Gillespie (5) look down from the fieldhouse as school officials from D-B and McMinn County discuss a coronavirus situation during the second round of the Class 6A playoffs at J. Fred Johnson Stadium on Nov. 13 in Kingsport.

KINGSPORT — In a shocking turn of events Friday night, the second-round TSSAA football playoff game between McMinn County and Dobyns-Bennett was called off 30 minutes after the 7 p.m. scheduled kickoff at J. Fred Johnson Stadium because of a coronavirus situation.

Officials from both schools met at the 50-yard line for nearly an hour to discuss the circumstances, eventually determining at about 7:30 that the Class 6A contest would be canceled.

The game will not be played next week, during which time the TSSAA will determine which team will advance to the state quarterfinal round.

Dobyns-Bennett coach Joey Christian was at a loss for words, which was understandable after the nearly unprecedented occurrence left everyone searching for answers.

“I’d say no one’s been involved in anything like this,” the third-year Tribe coach said. “I’m a ... I’m totally dumbfounded.

“From what I understand, there was a positive test on McMinn County’s team and that person was put under quarantine,” DeBusk said. “And that’s the information we received from several state administrators.

“They (administrators) were supposedly notified of the positive (test) today.”

The player did not accompany the team to Kingsport, though it stands to reason that he had been around teammates in the previous days.

“I don’t know about all that ... I’m not a part of that organization,” DeBusk said.

DeBusk added that the TSSAA would determine soon as possible which team would advance to the state quarterfinals to play unbeaten Maryville, a 35-6 winner over Bradley Central on Friday night.

“There’s not been a winner determined (in the McMinn-D-B game),” he said. “We have to collect all of our information, all of our data and send it to the TSSAA and they will make a decision. Hopefully by Monday.”

Surely everyone on both sides was distressed about the cancellation, which first became a possibility at about 6 p.m., according to Christian.

“Oh, I think everybody’s upset that our kids didn’t get a chance to win the game on the field,” he said. “So, yeah, everybody’s upset with that. (The D-B) kids are distraught, to say the least. We worked all week and had a great week of practice.

“The kids are very disappointed, as are all our coaches.”

Nothing can be considered too farfetched at this point of 2020, an extremely difficult year that has provided one blow after another to what was once considered the norm.

“Exactly, exactly,” Christian said. “It’s been a trying year for everyone.

“The decision was made to protect the kids and to prevent the spread of this horrible pandemic that we’re going through. It was made in the best interest of our kids and their kids as well. We were in constant contact (Friday night) with Bernard Childress,” he noted, referring to the executive director of the TSSAA.

If the Indians do advance to play again, they would travel for their next game.

Tribe quarterback Zane Whitson certainly hopes Friday night was not it for him on the playing field. A senior who gathered with teammates at midfield — still all dressed in game gear some 45 minutes after the cancellation — Whitson was quite emotional afterward while he and the Indians saluted their many followers still in the stands.

Still, he insisted he was not heartbroken.

“No, I’m not,” Whitson said. “I’m thankful. I’m thankful for all these people who come out here to support us every week, the band that comes out here every week. ... I mean, it’s a great moment.

“I ain’t got nothing to say except that I love my town, I love my city, I love these people, and ‘Roll Tribe.’ And that’s all I have to say.”