A headline in the Kingsport Times sports section on March 3, 1938, announces Watauga Academy’s victory over the favored hometown Dobyns-Bennett team. 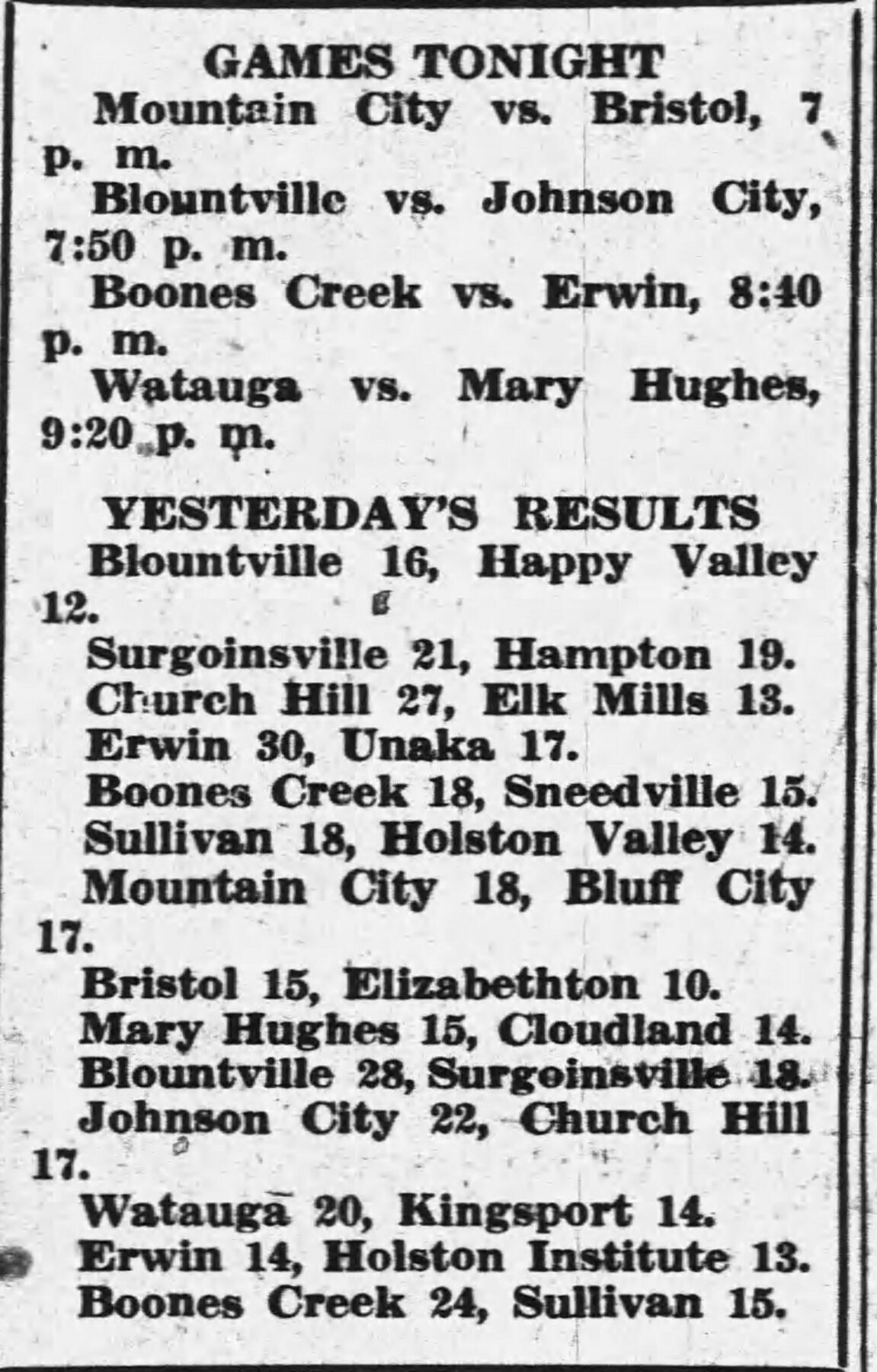 Upsets are either a beauty of sport or a meltdown, depending on which side you are on.

In the history of Northeast Tennessee basketball, there have been some pleasant surprises but few, if any, can compare to what little Watauga Academy accomplished in the old 16th District tournament in 1938.

The school from old Butler — which housed a little more than 100 kids at the time and had no indoor gymnasium of its own — shocked the local sports world by upending mighty Dobyns-Bennett 20-14 in Kingsport.

The dark horse Rams eventually reached the semifinals before losing to Erwin and then dropping the third-place game to Tennessee High.

It just goes to show: Never underestimate the power of grit and determination.

WHAT HAPPENED TO THE ACADEMY?

The Johnson County school’s history dates to the 1860s when it was known as Aenon Seminary. The building at the confluence of Roan Creek and the Watauga River officially opened in 1871.

In 1886, Aenon outgrew its capacity and a larger building was constructed across the river. The institution was renamed Holly Springs College.

When 1906 rolled around, the school was again renamed, this time Watauga Academy, by the new ownership in the Watauga Baptist Association. Because of financial struggles resulting from the Great Depression, the association sold the building to the Johnson County Board of Education in 1931, thus making the school public.

Despite the growing success of Watauga academically, the newly formed Tennessee Valley Authority had other plans in mind.

After a devastating flood in 1940, the TVA looked at the valley as a potential location to generate power and provide flood protection. The first plans were made to build the Watauga Dam in the Carden’s Bluff area, and the town of Butler was soon no more.

The town received a bit of reprieve when the United States entered World War II, and construction on the dam was halted until after the war. In 1948, the last class at Watauga Academy officially graduated before the floodgates opened later in the year and the town was underwater.

The bricks of Watauga Academy were removed and used to construct the sanctuary of the Virginia Avenue Methodist Church in Bristol.

One of the most prominent graduates of Watauga Academy was former U.S. Rep. B. Carroll Reece, who graduated in 1911.

Watauga had to play all of its games at gymnasiums that were not its own, and most of them were at Hampton.

In fact, the team practiced on outdoor sawdust courts in all types of weather — and to begin the 1937-38 season, the team had only three returning starters. Watauga was hit hard when star center Bob Fine turned 21 just 10 days before the tournament began and was ruled ineligible.

Under the direction of Paul Cates, the Watauga quintet strung together 18 wins in 24 tries, including a streak of 14 in a row before losing in the tourney semis.

The squad of Ellis Tucker, Earl Lunceford, B.A. Lipford, Hyder Wolfe, Wallace Cable, R.H. Milhorn, Vaught Wagner, Edwin DeVault and Fine took out much bigger schools like Newland, Hampton, county foe Mountain City and Cranberry. The Rams, however, had trouble proving their worth and did not get to play a Big 6 opponent that season.

The D-B team, meanwhile, had the best facilities money could buy and the best athletes. By their 17th season of playing, the Indians had won 291 of 379 games and were coached by the legendary LeRoy Sprankle.

With returning lettermen like Bobby Cifers, Hugh “Red” Blessing and Rob Anderson, the Tribe was poised to be a balanced team but had lost the services of all-time leading scorer Bobby Peters to graduation.

The Kingsport Times reported that 45 boys tried out for the D-B basketball team that winter. Watauga Academy had 41 boys enrolled in the whole school at the time.

Going into the fourth year of the 16th District tournament, D-B was one of the favorites along with unbeaten Mountain City, one-loss Cloudland, a lanky Erwin quintet, a highly touted Blountville squad and defending champion Tennessee High.

The 22-team tournament took place in early March with bragging rights and berths to the regional tournament on the line.

Watauga was considered a “pushover” and Kingsport Times sports editor Frank Rule said the town of Butler was so small that “one could stand on the railroad tracks and toss rocks over the entire community.”

Cates was quick to shoot down that statement in a postgame article in the Times.

The Rams surprisingly led throughout the game, grabbing a 7-6 lead at the half and pushing it to 15-9 at the end of the third quarter.

Newspaper accounts said the D-B squad had a tough time getting anything inside to Cifers because the stalwart Watauga defense stole the ball over and over again on the entry passes.

In another surprise, upstart Mary Hughes took out Cloudland 15-14 and moved into the quarterfinals against Watauga.

The Rams — behind 10 points from Lunceford — beat Mary Hughes 32-25 to advance to the semifinals, but the clock struck midnight on Cinderella and the Rams lost to eventual runner-up Erwin 37-26. Blountville eventually won the tournament title, the first in its history.

In the consolation game, Watauga battled Tennessee High to the bitter end but gave up a critical bucket with under a minute left that sealed the deal.

Lipford was named to the all- tournament team and Watauga received the sportsmanship trophy.

Amazingly, the Watauga team made the 100-mile round trip from Butler to Kingsport every night of the tournament on roads that were far from considered the best.

Since the beginning of the basketball program at D-B in the 1918-19 school year, the Indians have been eliminated in the first round of the district tournament 13 times.

In the 1938 season, the Tribe was ousted in the first round for just the second time and the first since 1926.

On the morning of the opening round, then-Erwin coach Cap Isbill warned Sprankle about the Watauga squad.

“Better watch out for that Watauga Academy outfit, Sprank,” Isbill said. “There’s nothing funny about that. Watauga has a real ballclub.”

Many coaches, including Sprankle, scoffed at the idea and the warning was lost in the general clamor.

Watauga was in existence for only another decade, and the basketball team never again reached that level of glory.