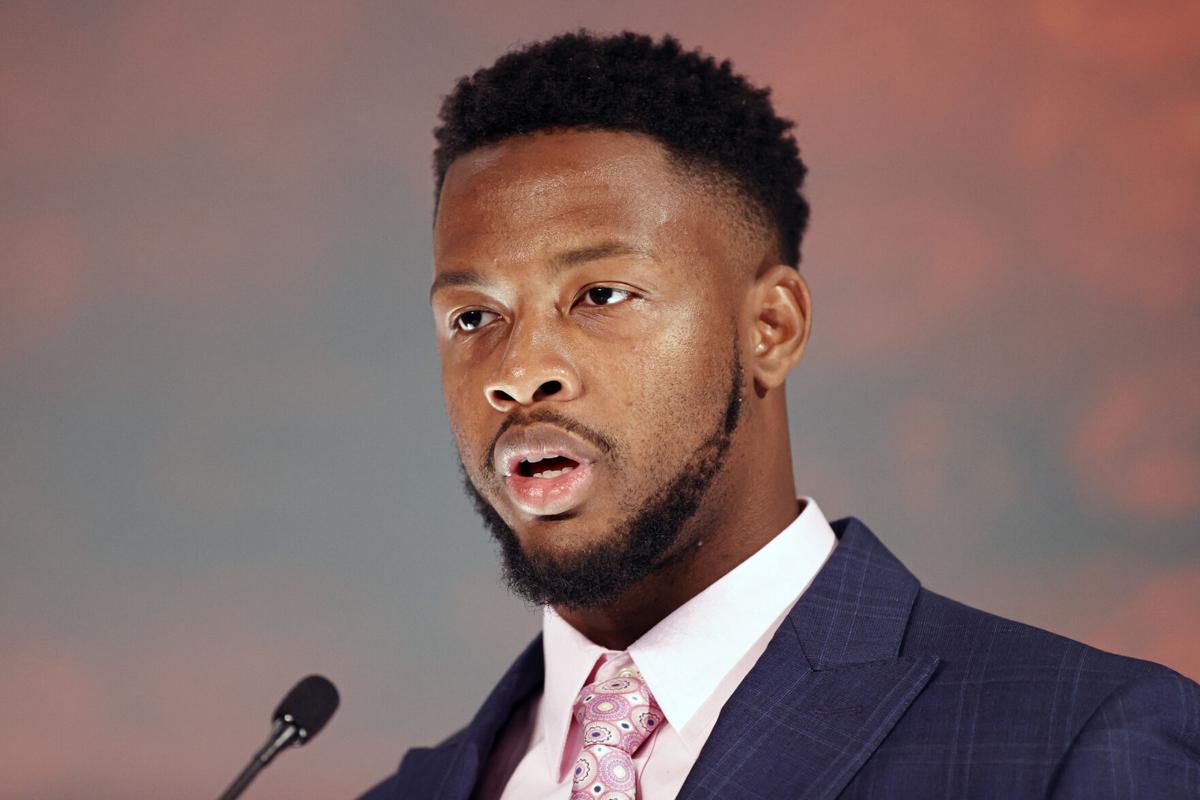 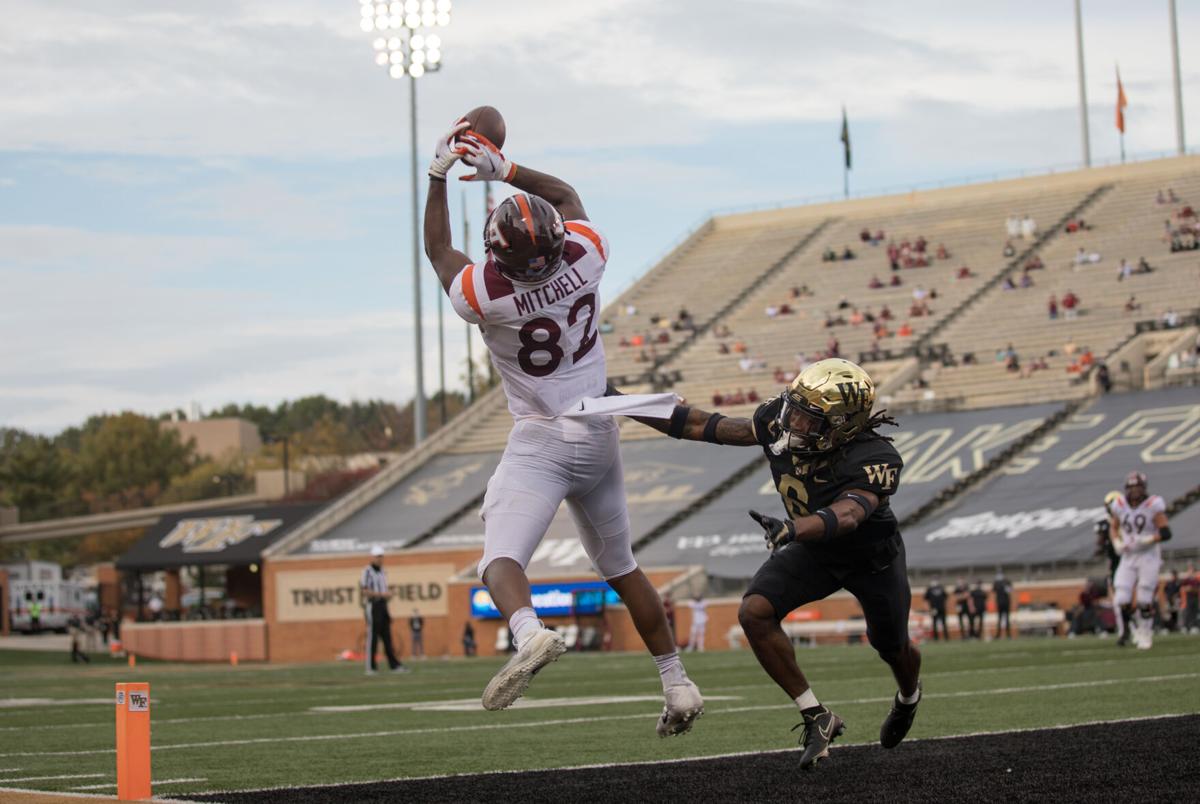 Virginia Tech’s James Mitchell (82) pulls in a pass for a touchdown in front of a Wake Forest defender during a game in Winston-Salem in this file photo. 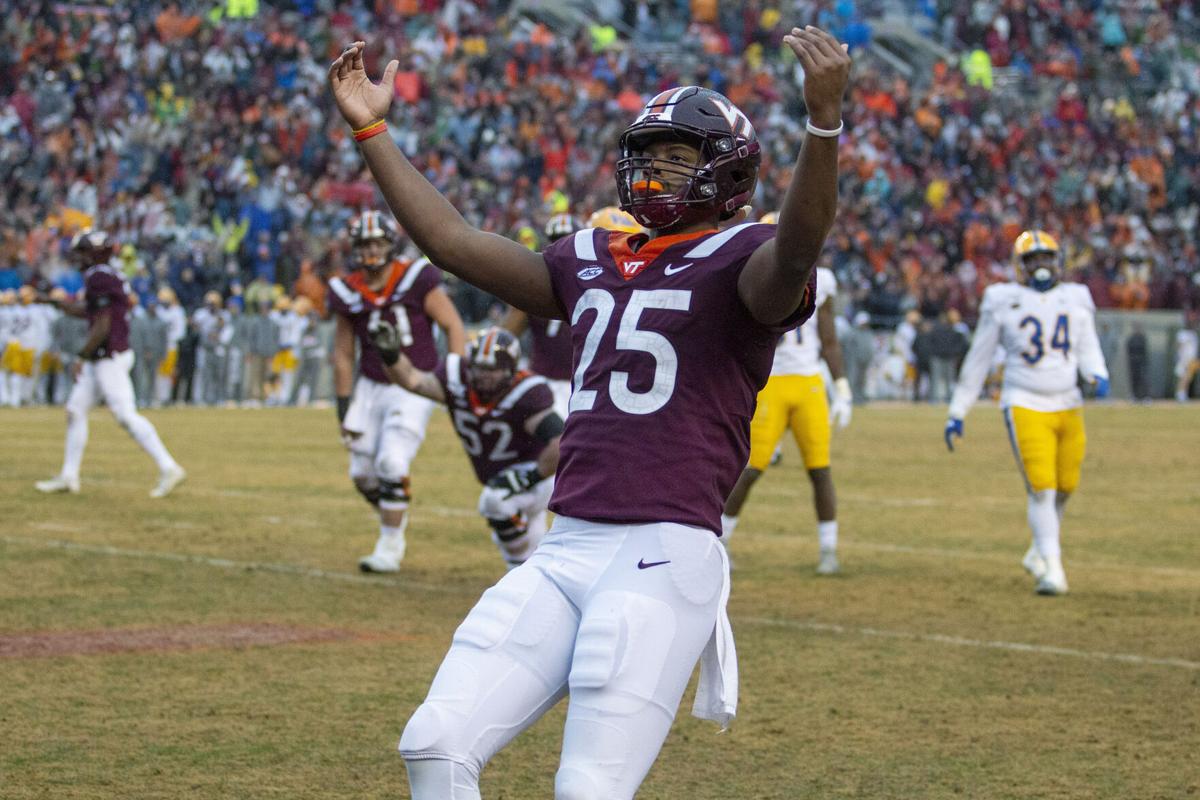 Virginia Tech’s James Mitchell (82) pulls in a pass for a touchdown in front of a Wake Forest defender during a game in Winston-Salem in this file photo.

Virginia Tech’s James Mitchell is taking his talents to the NFL.

Union football coach Travis Turner, who also coached Mitchell in youth travel basketball, may not necessarily have predicted such a future for the versatile tight end, but he’s hardly surprised.

“I knew from the time he was in the fourth grade that he had the potential to be somebody special,” Turner said Monday after the Big Stone Gap native announced his intention to enter the 2022 NFL draft following four seasons in Blacksburg.

In a post on Twitter, Mitchell said the Hokies’ bowl game will be his last with the team. He thanked coaches Justin Fuente, James Shibest and Charley Wiles for giving him the opportunity to play for Virginia Tech and represent his home state.

“I am very thankful for all the lessons you all have taught me and (for) helping to shape me into the man and player I am today,” Mitchell wrote.

Mitchell expressed his gratitude to the school’s medical staff and support staff before addressing the fans.

“To Hokie Nation, thank you for all the endless love and support you have given me and my teammates and making Lane (Stadium) such a great place to play,” he wrote.

“Ever since I was a kid,” he continued, “my parents taught me to always trust and lean on my faith in God and everything else will work out!”

He then concluded his message by saying that he had “decided to step out on that faith and declare for the 2022 NFL draft. Virginia Tech is a special place and will always be my home!”

The 6-foot-3, 255-pound Mitchell finishes his Virginia Tech career with 52 catches for 838 yards and seven touchdowns along with five rushing TDs.

Before going to Blacksburg, he starred for Turner’s Bears. Mitchell was the 2017 VHSL Class 2 offensive player of the year and a four-time all-state selection, the latter a rare feat that Turner said may never happen again.

Despite the many accolades, Turner said Mitchell was one of the most unassuming kids he’s ever coached.

“That’s a hard thing to do, to be an all-star athlete and humble, but that was James,” Turner said. “I never remember him talking about himself. It was always about the team.

“He is a natural leader. Kids just gravitated to him on the field and at school. A lot of that credit goes to his parents.”

But Mitchell’s success wasn’t simply talent-based. Turner said Mitchell was always prepared and knew Union’s game plan as well as the scouting report on its opponents.

“People just saw the end result of his work on Friday nights. They didn’t see the hard work he did every week Monday through Thursday,” Turner noted. “That’s where he did all his hard work.”

Mitchell, voted a Hokies team captain before the season, will be with Virginia Tech (6-6) for its Pinstripe Bowl matchup with Maryland (6-6) on Dec. 29 at Yankee Stadium in New York. Kickoff in the Bronx is set for 2:15 p.m. on ESPN.

Kevin Mays contributed to this report.