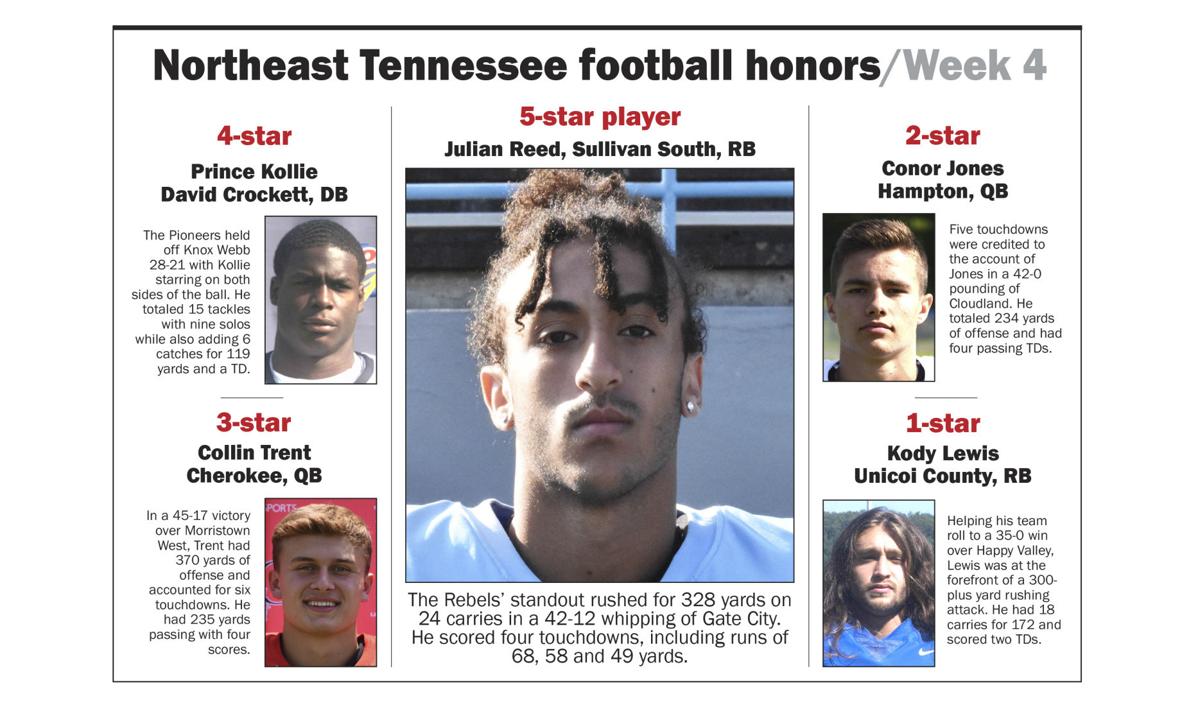 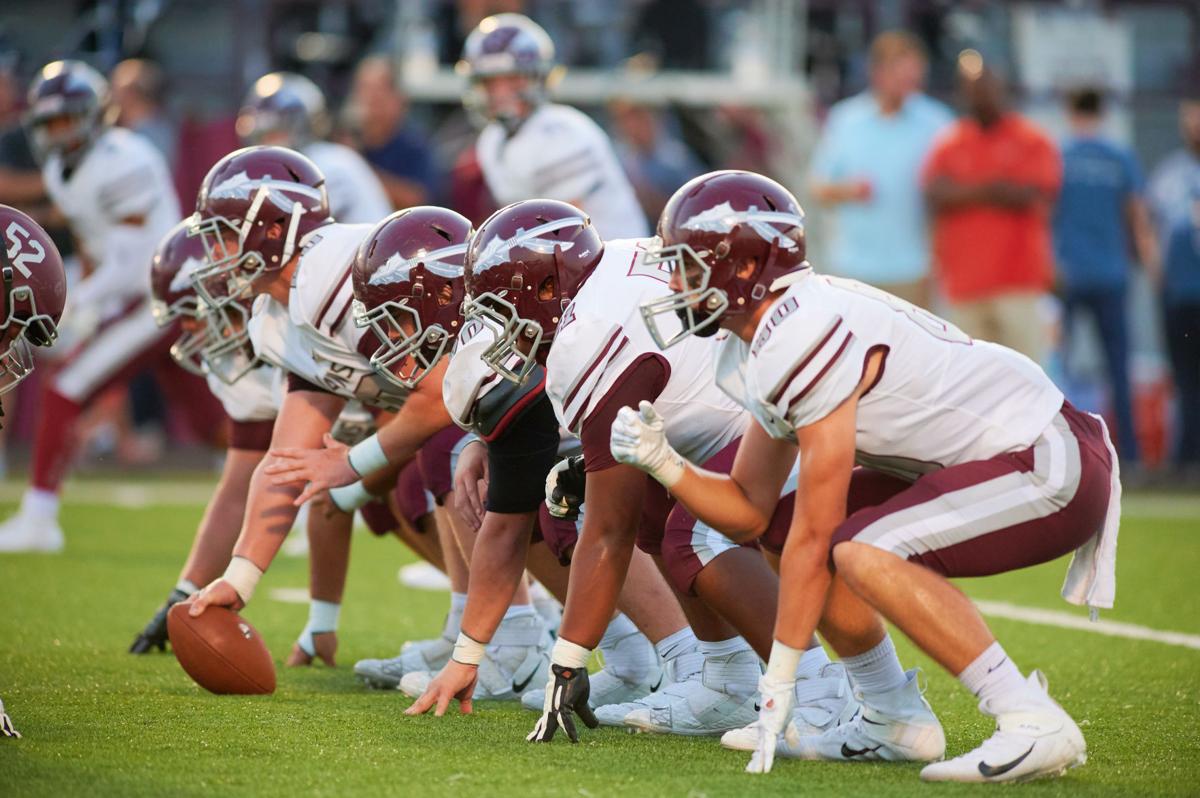 Three straight blowout wins carried Dobyns-Bennett into the role of favorite in the Region 1-6A title. The Indians host Hardin Valley on Friday night. 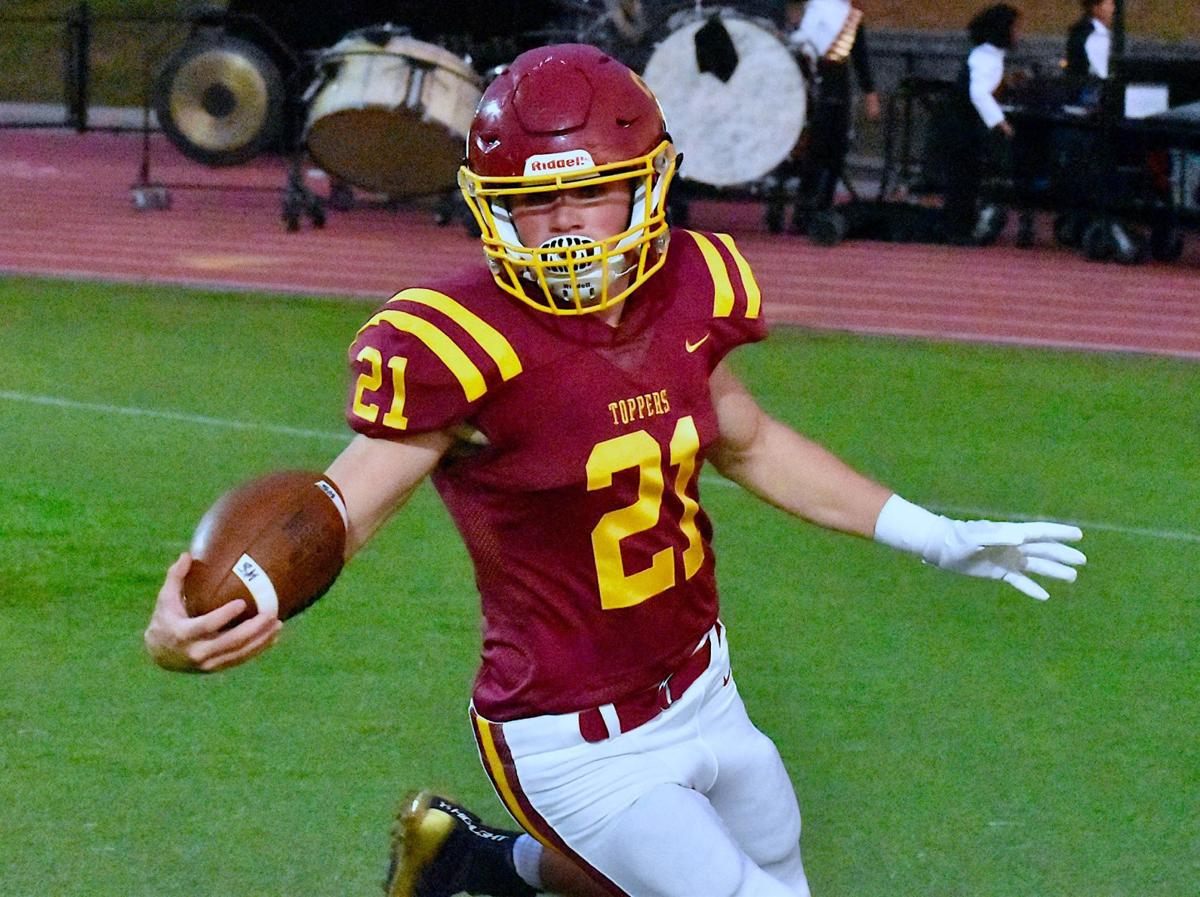 Science Hill's Andrew Kanady has four receiving touchdowns on the season, but the Hilltoppers will take a 1-3 record into their region game against Jefferson County.

Three straight blowout wins carried Dobyns-Bennett into the role of favorite in the Region 1-6A title. The Indians host Hardin Valley on Friday night.

Science Hill's Andrew Kanady has four receiving touchdowns on the season, but the Hilltoppers will take a 1-3 record into their region game against Jefferson County.

Going into the season, Science Hill, Farragut and Hardin Valley were among the teams most people were picking to win the Region 1-6A football league.

One of the different looks is D-B taking over the role of favorite. The Indians — 3-0 with three blowout wins — play host this week to Hardin Valley, which is coming off a competitive effort against defending Class 5A champion Knox Central. The Hawks could be hard pressed to handle the Indians on both sides of the football.

Science Hill is certainly still in the title mix, but the Hilltoppers will have to take care of a surprise contender in Jefferson County on Friday. The Patriots squeaked by Morristown East and Morristown West before suffering a 27-point blowout loss to Class 5A Knox West.

The Hilltoppers enter as a slight favorite, depending on the status of injured standout running back Chris Thomas. He missed most of the second half against Greeneville last week.

And although nobody should be counting Farragut out of the mix, the Admirals’ surprising 21-14 loss last week to Oak Ridge — a team D-B beat by a score of 41-6 — added question marks to their standing as a title contender.

The league race will heat up even more in Week 7 as Science Hill visits Farragut and the Indians travel to take on Jefferson County.

In the past two games between Science Hill and Greeneville, the Greene Devils outscored the Hilltoppers 62-3 when the ’Toppers didn’t have running back Chris Thomas available — with the field goal coming in Friday’s game three plays after Thomas went out with an injury.

Thomas, who missed last year’s 42-0 loss, helped his team drive to first and goal at the Greene Devils’ 5 early in the third quarter. He was injured and the Hilltoppers settled for a field goal. Greeneville outscored them 20-0 the rest of the way.

Thomas had 18 carries for 87 yards before his injury.

Some people may view the Greene Devils’ rough start against Science Hill on Friday as a sign they won’t be able to win a third straight title.

But while this is certainly a different team, the Greene Devils seem to have the same mettle they possessed each of the last two years. If anything, the impressive come-from-behind win is evidence in favor of the Greene Devils still being the team to beat in Tennessee’s Class 4A.

Chances seem to be very high that it will come down to the trio of Greeneville, Elizabethton and Anderson County in the fight to advance to the state semifinals.

He remained in ninth place on the state’s all-time list but moved within 303 yards of the Region 1 record — which was set last year by Greeneville’s Cade Ballard (9,366).

Larkins had three touchdown passes to move his career total to 84. He needs four more to move into 10th place on the state’s all-time list.

Unicoi County used a 35-0 pounding of Happy Valley to move into this week’s rankings.

GAMES OF THE WEEK

As long as the Indians contain speedy running back Kelton Gunn, they should have their way with the struggling Hawks.

It has been a rough start for the Hilltoppers, but the bottom line is always the region record. And Science Hill is 1-0 in that regard.

The Battle for Hawkins County seems to have a little more bite than bark this year. The Chiefs are undefeated while the Falcons’ two losses came against teams with a combined record of 7-0.

It is an extreme test for the Golden Raiders because the Rebels boast a perfect record along with an offense that averages 39 points per game.

PICK OF THE WEEK

The Indians have been remarkably consistent with offensive outputs of 33, 41 and 39 points while surrendering 13, 6 and 14. This game should fit neatly into that precedent.

PLAYERS OF THE WEEK

The Rebels’ standout running back had his second massive game of the season. In a 42-12 whipping of Gate City, the senior rushed for 328 yards on 24 carries with four touchdowns. He had three long scoring runs (68, 58 and 49 yards).

Getting it done on both sides of the ball, the junior struck for 15 tackles on defensive — including nine of the solo variety in a 28-21 win over Webb. At his receiver position, he had six catches for 119 yards with a TD.

It was another banner night for the senior. Trent passed for 235 yards, rushed for 135 more and finished with six total touchdowns in a 45-17 win over Morristown West. He had four passing TDs.

Helping his team to 42-0 victory over Cloudland, the sophomore totaled 242 yards of offense. Jones passed for 145 yards with four scores and also added 97 yards rushing with a TD.

The Blue Devils crushed Happy Valley 35-0, and Lewis was front and center in the assault. He rushed for 172 yards on 18 carries and scored twice.

Clearing the way for over 200 yards rushing and providing plenty of time for a strong passing attack, the Clone Hogs did their damage in a 35-12 win over Daniel Boone.

DEFENSIVE UNIT OF THE WEEK

Picking up a much-needed 32-6 win after two close losses, the Cougars’ defense stepped up. They not only held Pigeon Forge to one score for the entire game, they limited the Tigers to 62 yards of total offense while building a 19-0 halftime lead. For the game, Central surrendered only 67 yards passing.

Dobyns-Bennett has a key district match scheduled for Thursday. The Lady Indians travel to take on Tennessee High at 6 p.m.

Both teams are 1-1 in league play, trailing district leader Science Hill. The Lady Hilltoppers were 4-0 heading into Monday’s game at David Crockett.

In the Large School classification, the area’s conference tournament will take place Sept. 25 at Elizabethton Golf Course. The District 1 tournament is set for Sept. 30 at Ridgefields Country Club in Kingsport.

The Region 1 competition will be held Oct. 7 in Morristown.

In the Small School classification, both the district (Sept. 23) and region (Sept. 30) events will be held at Elizabethton Golf Course.