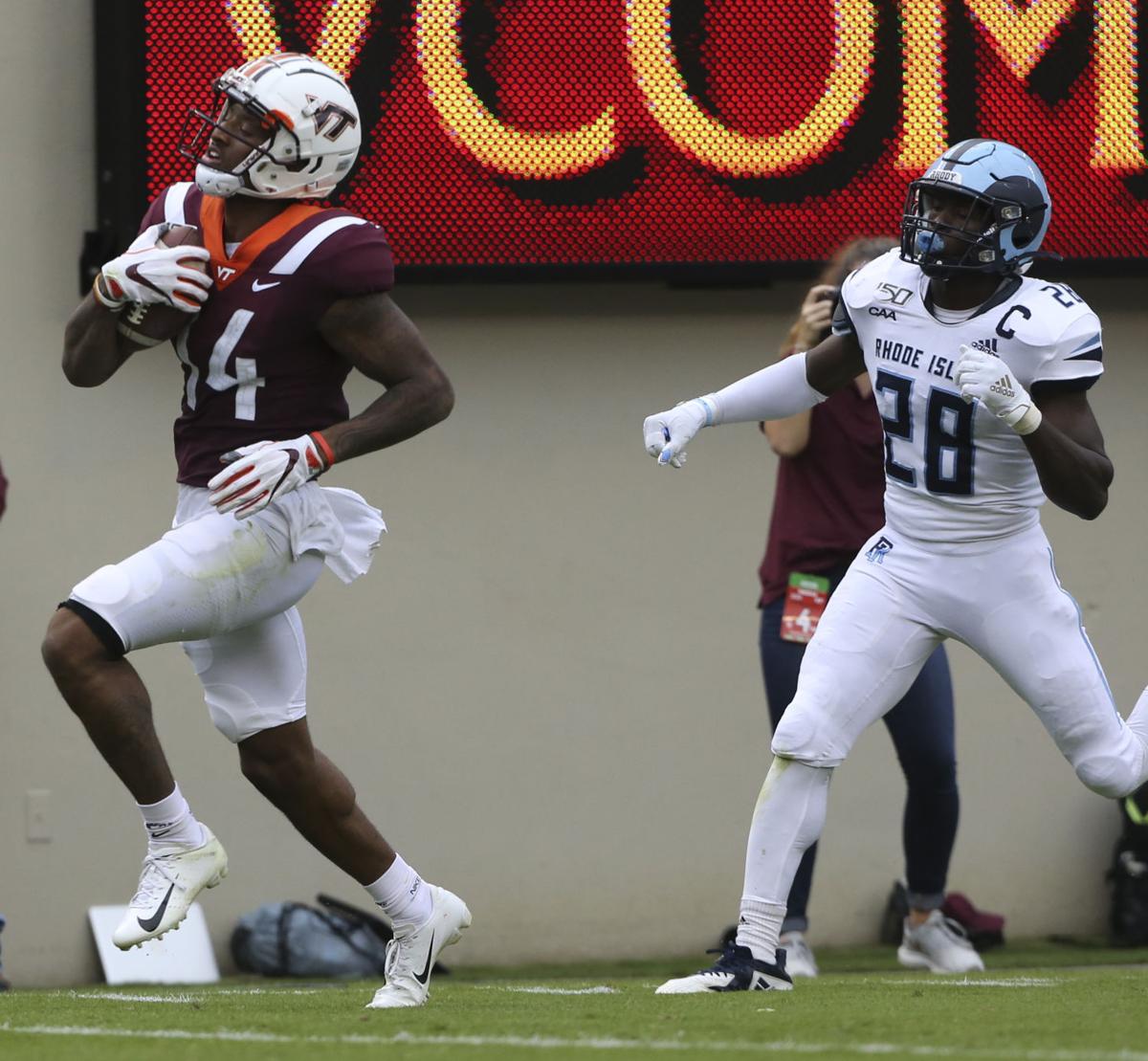 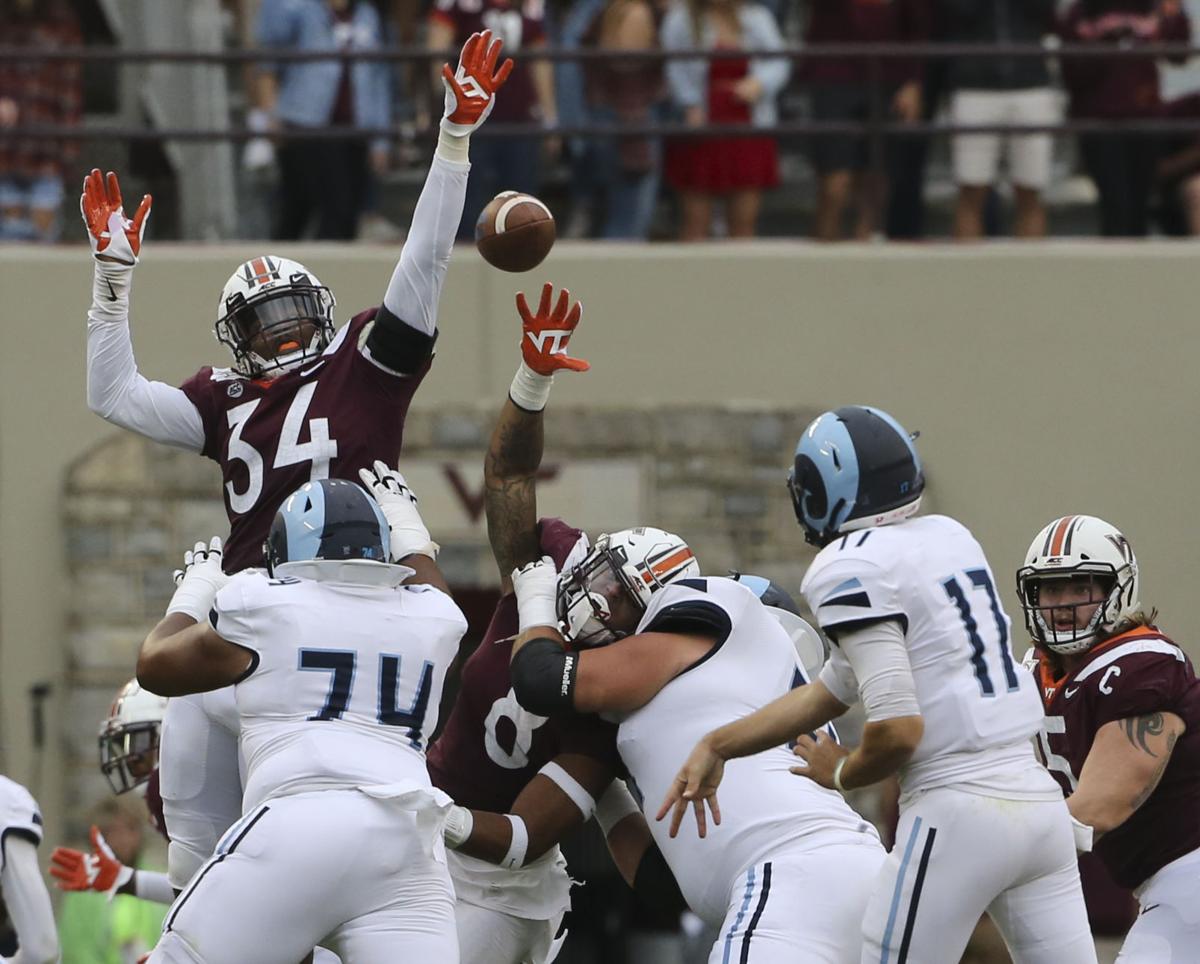 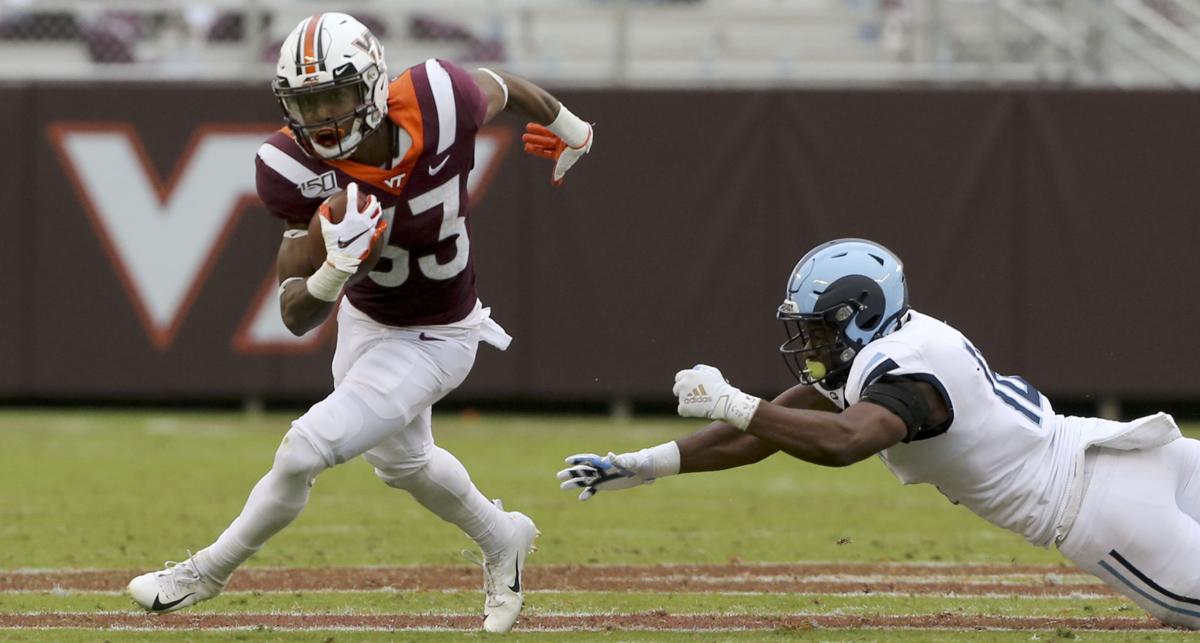 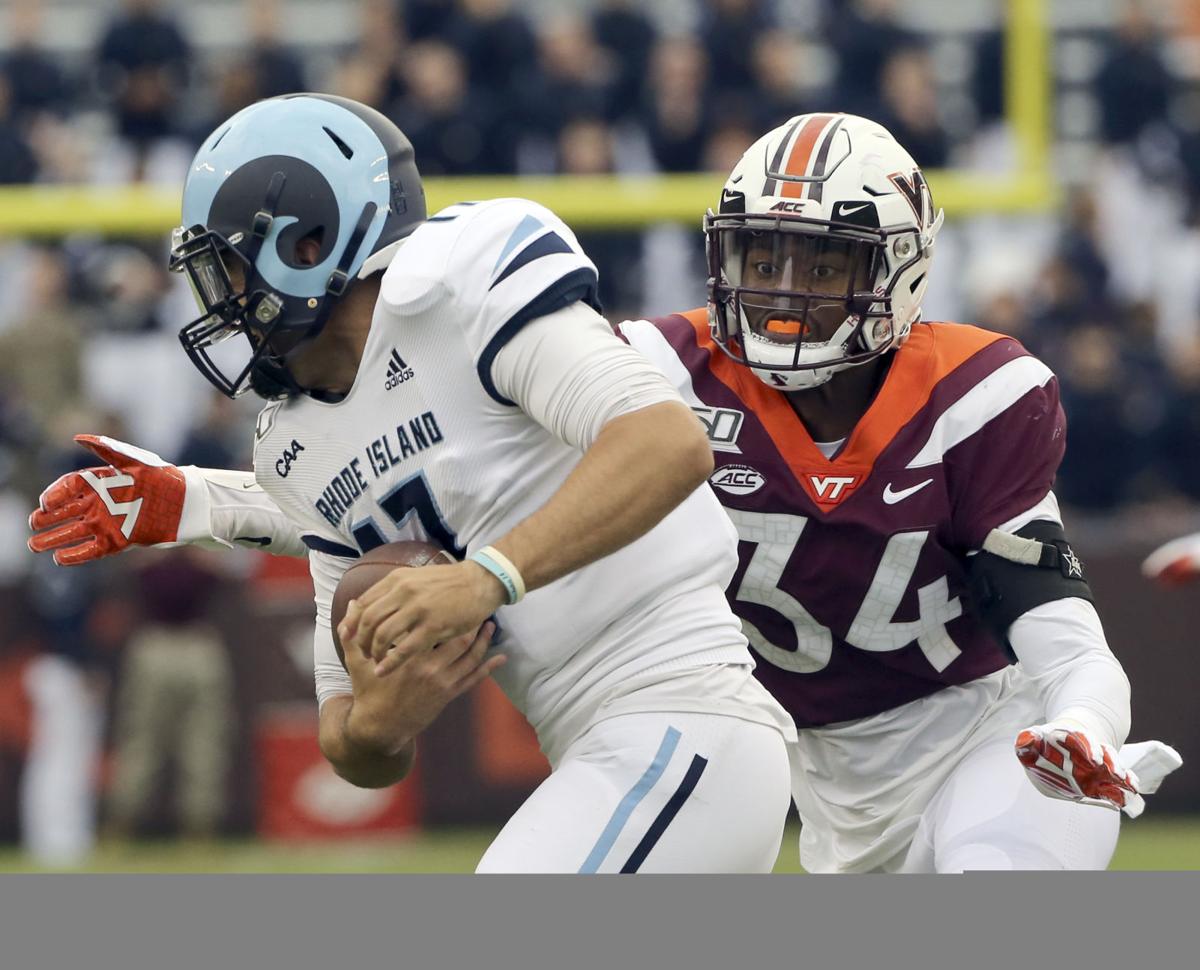 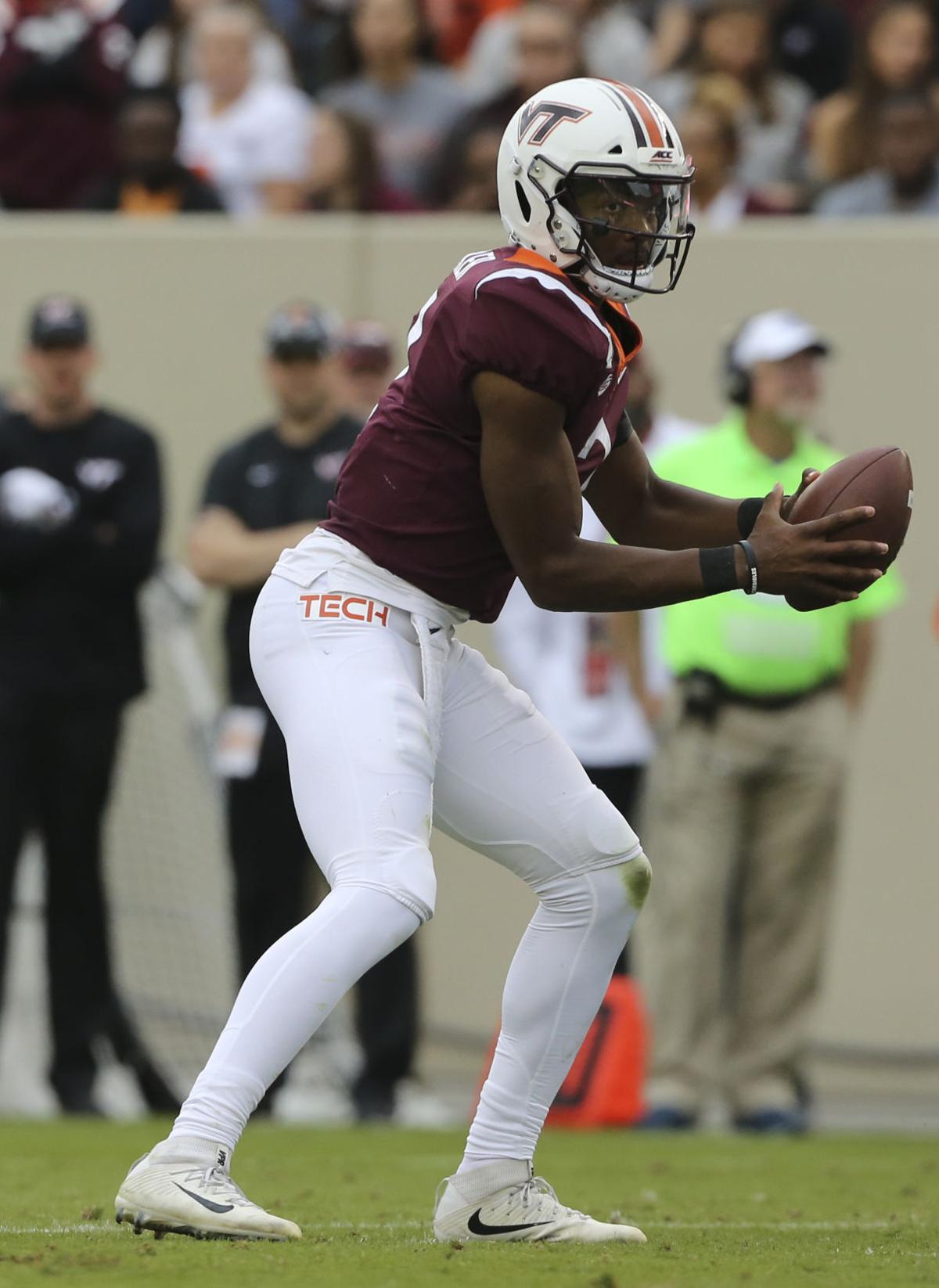 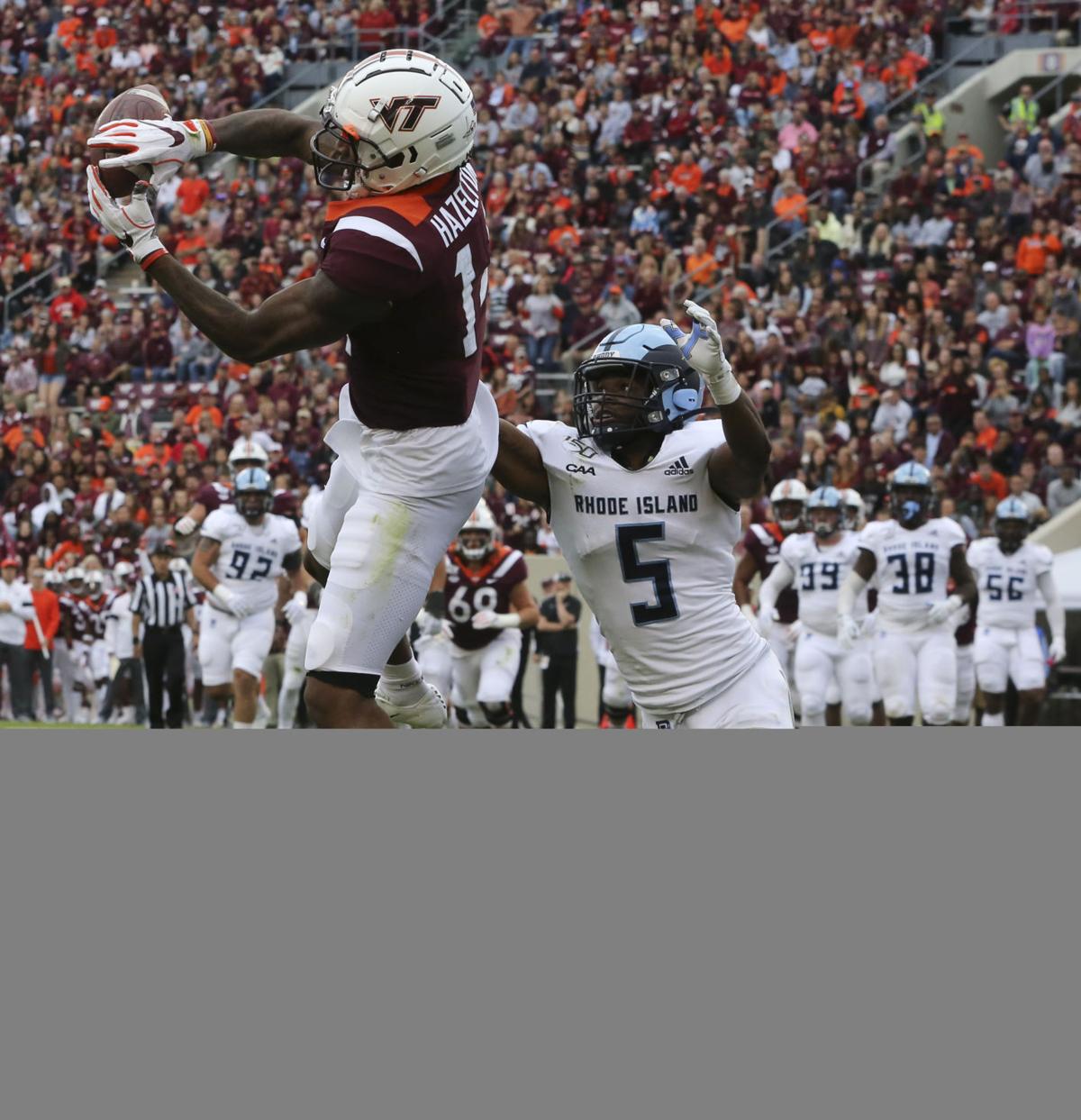 Virginia Tech receiver Damon Hazelton (14) cannot hold on to a pass in the end zone while defended by Rhode Island's Malik Wilder (5) during Saturday’s game at Lane Stadium in Blacksburg. 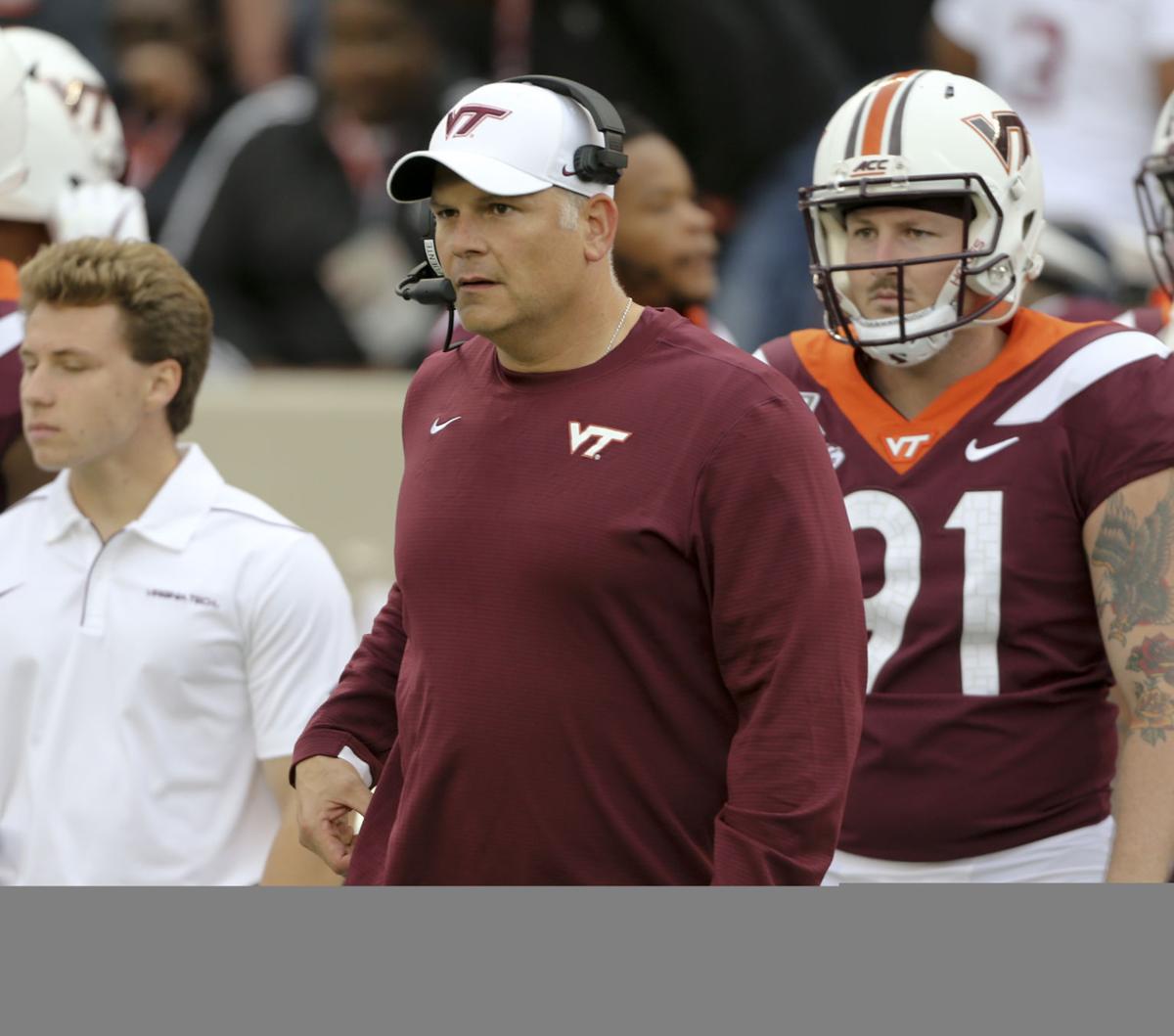 Virginia Tech receiver Damon Hazelton (14) cannot hold on to a pass in the end zone while defended by Rhode Island's Malik Wilder (5) during Saturday’s game at Lane Stadium in Blacksburg.

BLACKSBURG — Three weeks and a quarterback change appear to have made a significant impact for Virginia Tech.

The Hokies had a bye after their 45-10 loss to Duke three weeks ago, came back from the break with a new quarterback in Hendon Hooker and the results have followed. They won 42-35 in Miami last weekend and beat Rhode Island 34-17 on Saturday.

“It feels like right now we have some momentum and our mentality has gotten way better,” linebacker Rayshard Ashby said.

Hooker threw three touchdown passes for the second straight game without trying to do too much.

“Whatever they’re giving us, that’s what we’re going to take,” he said after completing 16 of 27 passes for 261 yards. He also ran 15 times for 43 yards and led an offense that scored on all five of its trips inside the Rhode Island 20.

Hooker hit Damon Hazleton from 9 and 37 yards in the first half and Dalton Keene from 3 yards after the Rams pulled to within 17-14 in the third quarter. The Hooker-to-Hazleton connection almost teamed up for a third first-half score, but Hazleton dropped what looked like a sure 71-yard scoring pass before halftime. Hooker’s scoring toss to Keene was his fourth to the tight end in the past two games.

“The biggest thing is that he’s taken care of the football in both starts,” Hokies coach Justin Fuente said.

Virginia Tech (4-2) won its second in a row, this time without showing the firepower that marked the victory at Miami.

The Hokies were stopped on three consecutive runs after having a first down at the Rams’ 5- yard line on their opening possession, settling for a field goal, and needed a 75-yard scoring drive early in the final quarter to get some insurance points.

The Rams (1-5) fell to 1-18 against Football Bowl Subdivision schools but not before throwing a scare into the crowd at Lane Stadium.

“We came out and did exactly what we needed to do,” Rams coach Jim Fleming said.

They needed just 2:34 after taking the second-half kickoff to drive for their lone touchdown, a 9-yard pass from Vito Priore to Ahmere Dorsey. A 2-point conversion made it a three-point game, but Hooker drove the Hokies 93 yards for Keene’s touchdown on the next series.

A scoring run by Deshawn McClease pushed the margin to 14 points. Brian Johnson kicked a pair of 22-yard field goals.

Rhode Island: Fleming admitted this week the game was as much about a payday for his program as anything, but the Rams did some things that suggest things may improve when they go back to playing competition at their level. In Aaron Parker and Isaiah Coulter, they have two top quality receivers, and Priore was solid against the Hokies, completing 26 of 47 attempts for 286 yards.

Virginia Tech: The Hokies were more impressive on offense at Miami last week, but Hooker had as many completions — 10 — by halftime as he had all game against the Hurricanes, and he did it in five fewer attempts. Hazleton’s return to form will continue to provide a huge boost to the passing game despite that moment late in the first half he’d like to have back.

The Hokies will be without rover Reggie Floyd for the first half of next weekend’s game against North Carolina after the senior was called for targeting for a hit on Coulter early in the fourth quarter.

Rhode Island was added to Virginia Tech’s schedule after the Hokies canceled a series with East Carolina and needed a replacement, even if a victory — Virginia Tech’s second against an FCS-level school — meant it wouldn’t count toward bowl eligibility.

The Rams got their first real look at the Hokies after topping Brown 31-28 last weekend.

“We went home and watched Miami-Virginia Tech and said, ‘What the hell are we getting into?’ ” Fleming said.