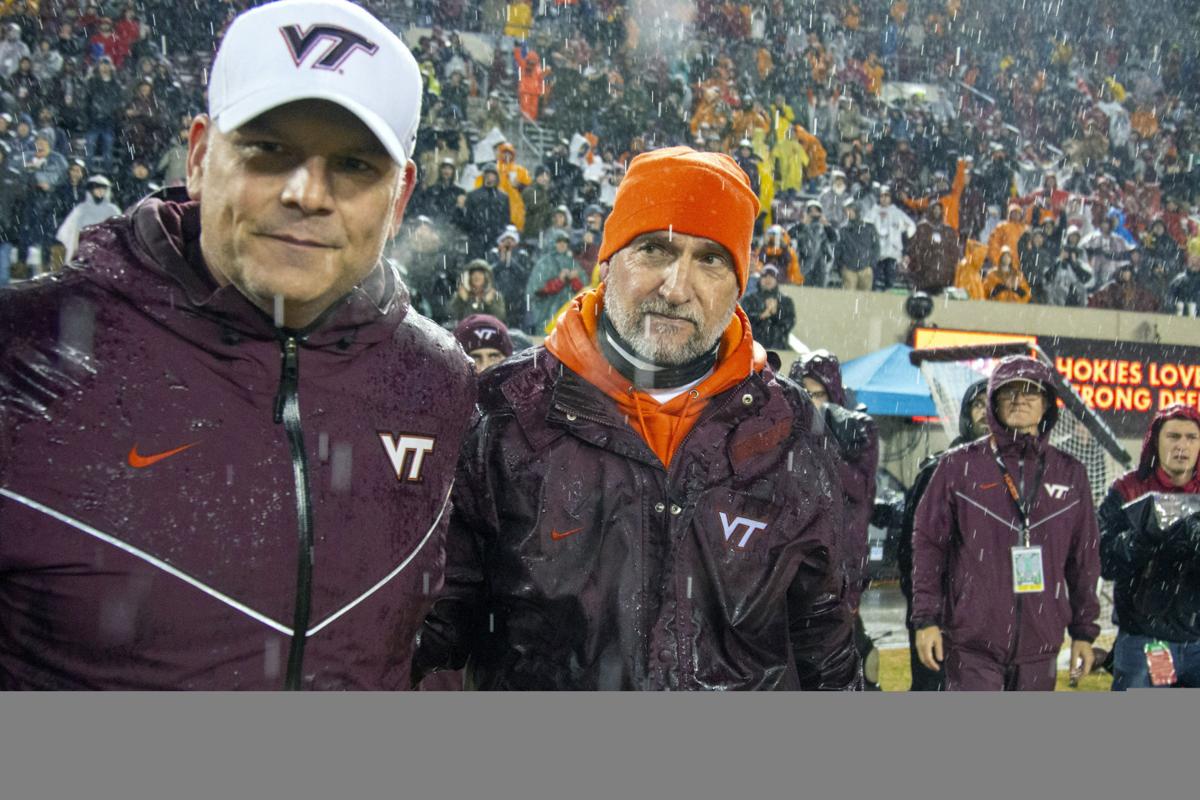 Virginia Tech head coach Justin Fuente and defensive coordinator Bud Foster walk off the field after the Hokies' 28-0 win over Pittsburgh on Saturday at Lane Stadium in Blacksburg. 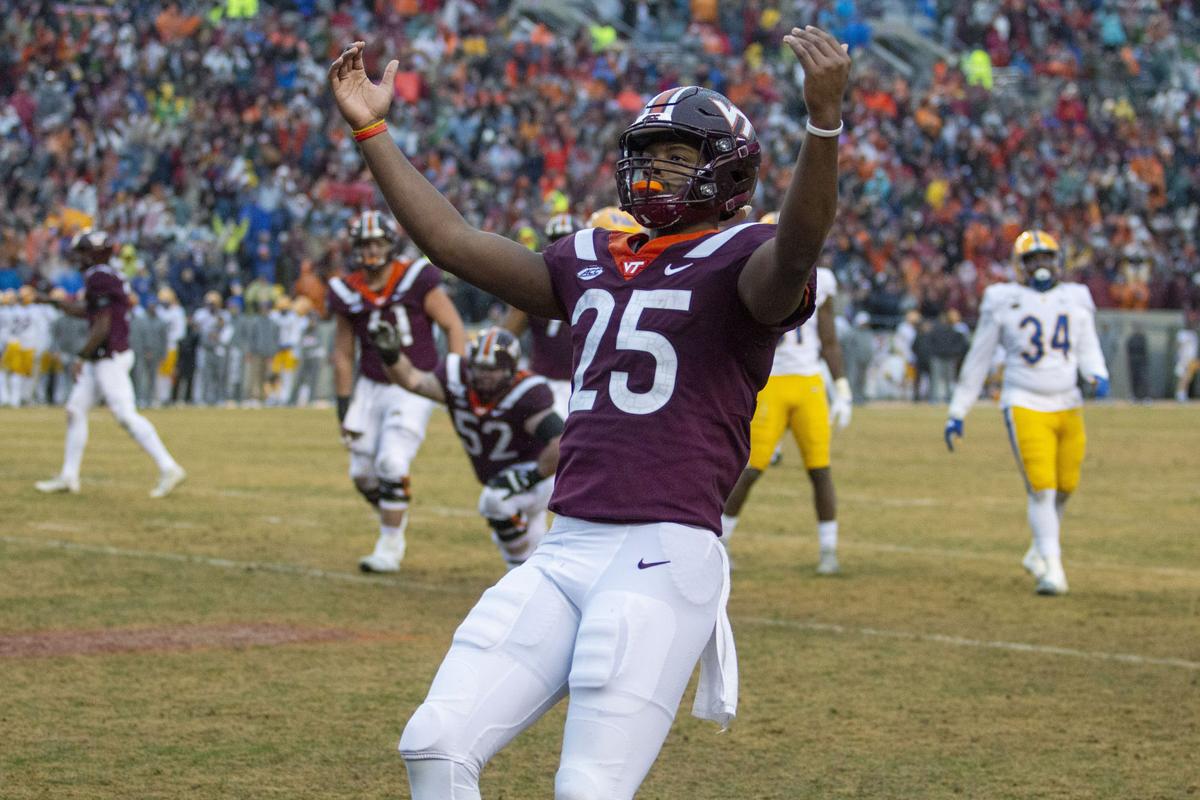 Virginia Tech tight end James Mitchell celebrates after scoring a touchdown against Pittsburgh on Saturday at Lane Stadium in Blacksburg. 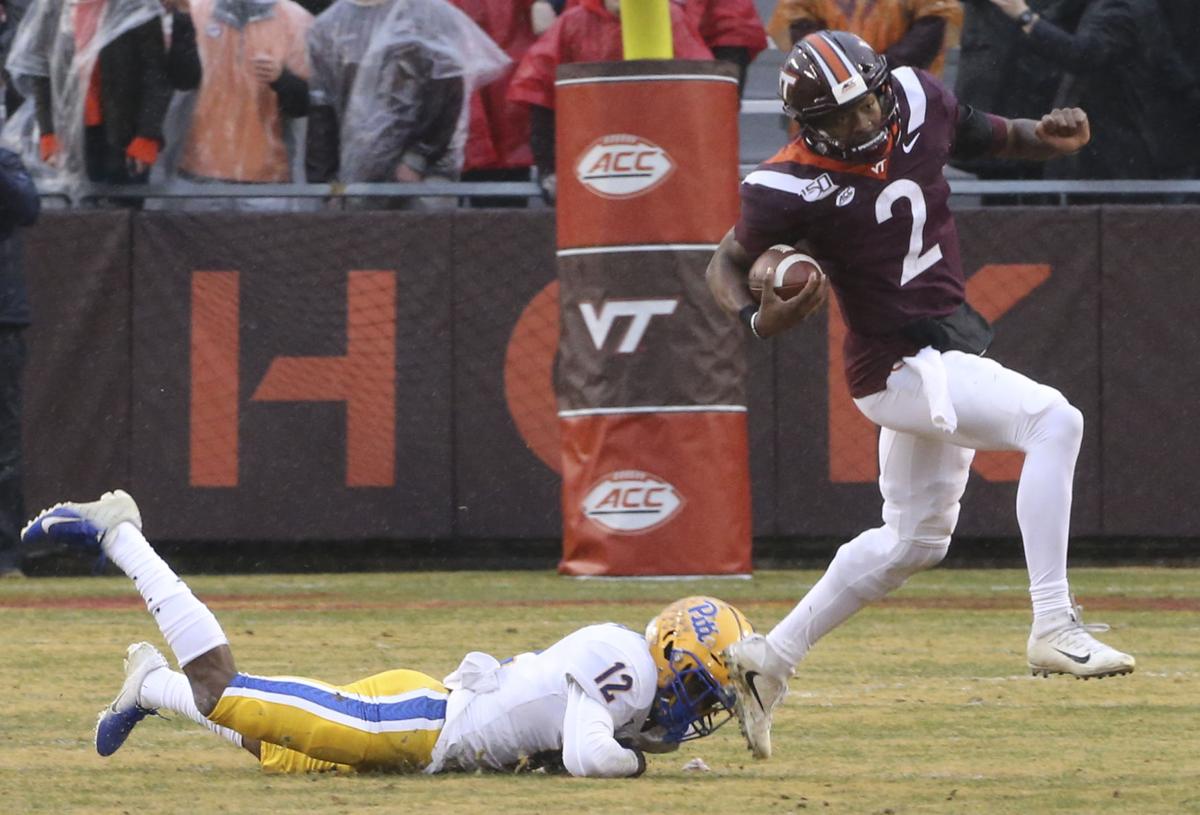 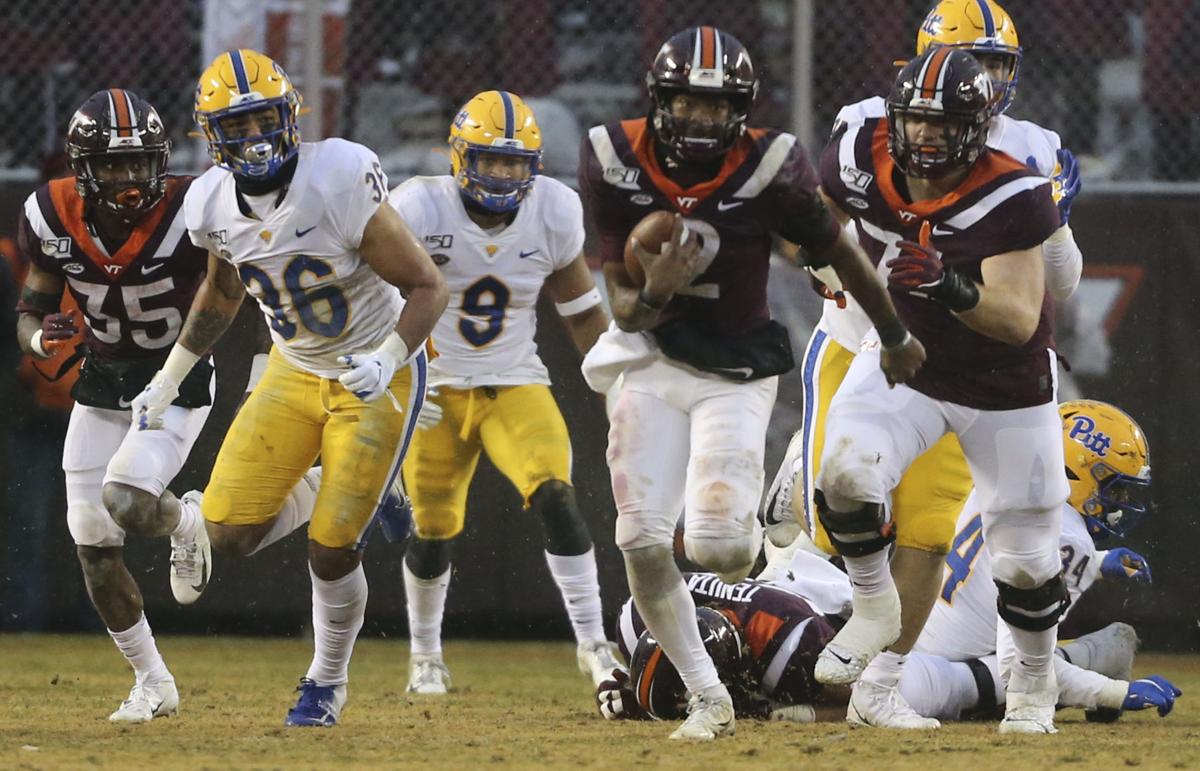 Virginia Tech quarterback Hendon Hooker (2) runs for first down against Pittsburgh on Saturday at Lane Stadium in Blacksburg. 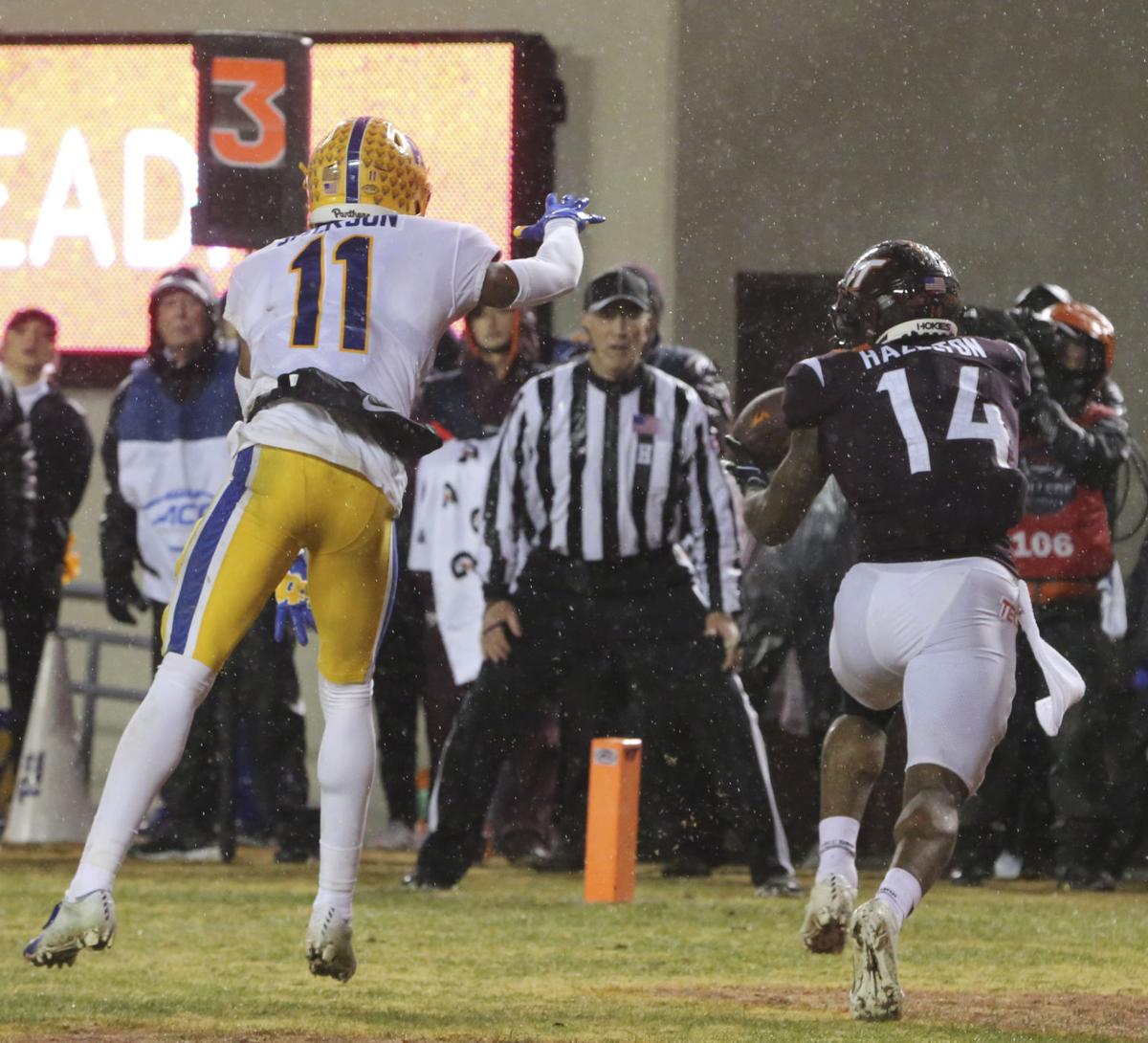 Virginia Tech head coach Justin Fuente and defensive coordinator Bud Foster walk off the field after the Hokies' 28-0 win over Pittsburgh on Saturday at Lane Stadium in Blacksburg.

Virginia Tech tight end James Mitchell celebrates after scoring a touchdown against Pittsburgh on Saturday at Lane Stadium in Blacksburg.

Virginia Tech quarterback Hendon Hooker (2) runs for first down against Pittsburgh on Saturday at Lane Stadium in Blacksburg.

BLACKSBURG — There was little for Virginia Tech fans to be disappointed about on Saturday, but coach Justin Fuente put somewhat of a damper on a festive day when he reaffirmed that Bud Foster planned to retire at season’s end.

“I think his mind is pretty made up,” Fuente said, smiling.

Such news was disappointing because the Hokies’ defensive coordinator continues to prove his chops. His defense put together a vintage performance against Pittsburgh, and Hendon Hooker threw for 153 yards and two touchdowns to lead No. 25 Virginia Tech to a 28-0 Atlantic Coast Conference victory in a steady downpour.

Hooker threw touchdown passes to Tré Turner and Damon Hazelton, and the Hokies (8-3, 5-2) held Pitt (7-4, 4-3) to under 200 yards and scored on a fumble return in earning their sixth win in the past seven games.

“I can’t say enough good things about our guys,” Fuente said. “I felt that way about them early in the year, too, though. I really did. I’m enjoying every moment with them. I think they’re a special group of young men. They’ve been through special circumstances and stuck together.”

The win set up a showdown with rival Virginia. Friday’s winner claims the Coastal Division title and a date with Clemson in the ACC championship game on Dec. 7.

The Panthers finished with a season-low 177 yards. Kenny Pickett completed 10 of 26 passes for 103 yards.

“I give Virginia Tech a lot of props for what they did out there today. Bud Foster’s defense came to play, I can guarantee you that. ... It’s hard to win when you can’t get in the end zone. We had some field position at times, but just didn’t do anything with it.”

Hooker’s 71-yard pass to Tayvion Robinson led to James Mitchell’s 1-yard touchdown run in the first quarter, giving the Hokies a 7-0 lead. Moments after that score, Norell Pollard returned a Pickett fumble 7 yards for a TD that pushed the lead to 14-0.

Virginia Tech basically put the game away with Hooker’s 3-yard touchdown to Turner with 45 seconds left in the first half. Hooker completed 10 of 13 passes and improved to 6-0 as the Hokies’ starting quarterback.

“Everyone’s just coming together as a family and just showing love and support,” Hooker said. “At the same, everyone’s expecting you to do your job.”

Foster is retiring after 33 years as an assistant coach at Virginia Tech, including the past 23 as defensive coordinator. Saturday’s game marked his final appearance as a coach at Lane Stadium, and the Hokies fittingly sent him out with a shutout — his 31st as the coordinator.

“You couldn’t have scripted it any better, I don’t think, when it’s all said and done,” Foster said. “As far as down the stretch, the Wake game (a 36-17 win), and then to go to Georgia Tech and play the way we did (a 45-0 victory) ... and then it was a playoff game today, basically. To play the way we did, we didn’t play tight, we played with confidence, we executed, we made plays, and to see that from a coaching perspective is very gratifying.”

Pittsburgh: Poor execution and especially penalties hurt the offense. The Panthers were flagged for two false starts and two illegal formations, and a third-quarter holding penalty negated a first-and-goal at the Virginia Tech 8 — a drive that ended with a punt. Pitt got into Tech territory just three times on 13 possessions.

Virginia Tech: The Hokies, who looked dead after an 0-2 start to ACC play, have been playing much better defense — a big part of their resurgence. They haven’t allowed over 301 total yards or more than 63 yards rushing in each of their past three games. Virginia Tech’s back-to-back shutouts are the unit’s first since 2005.