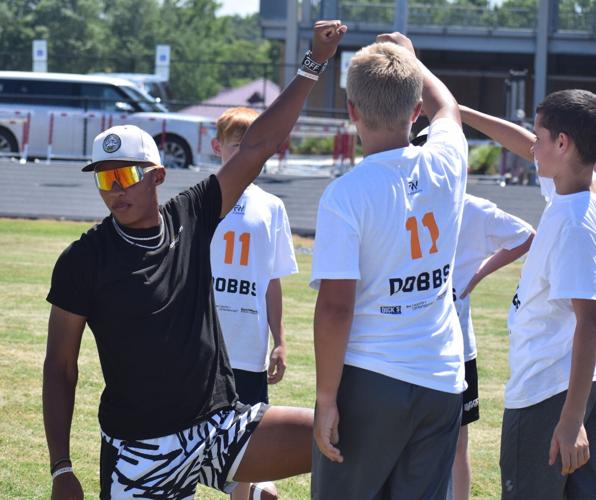 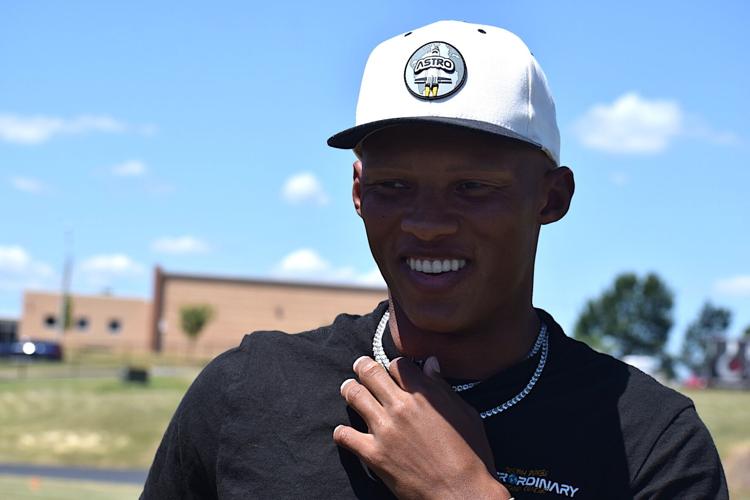 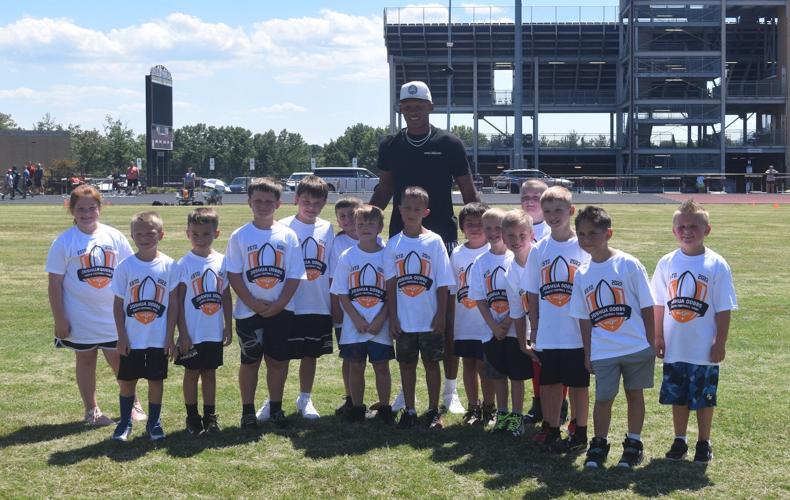 Cleveland Browns quarterback Josh Dobbs poses with a group of players during Thursday’s football camp at Dobyns-Bennett in Kingsport. 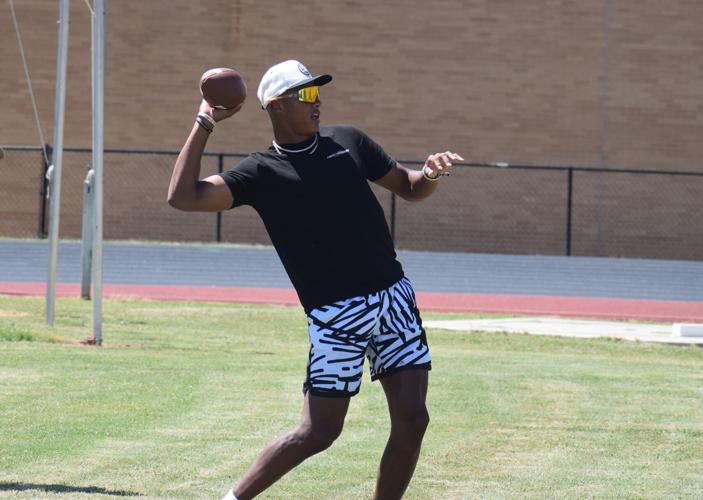 Cleveland Browns quarterback Josh Dobbs gets ready to throw a pass during his Thursday camp at Dobyns-Bennett. 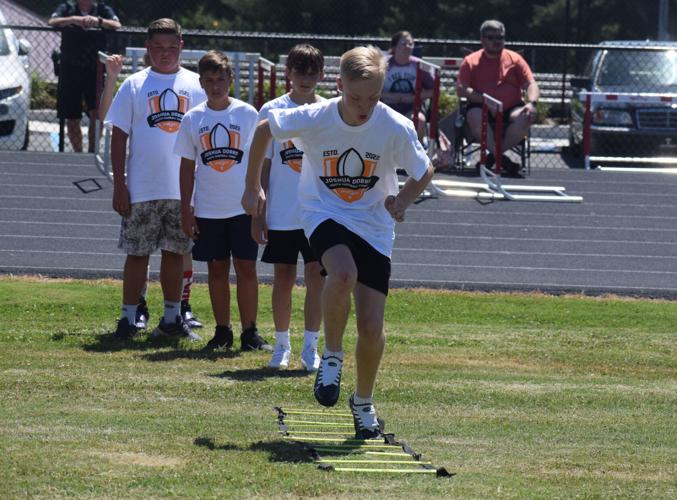 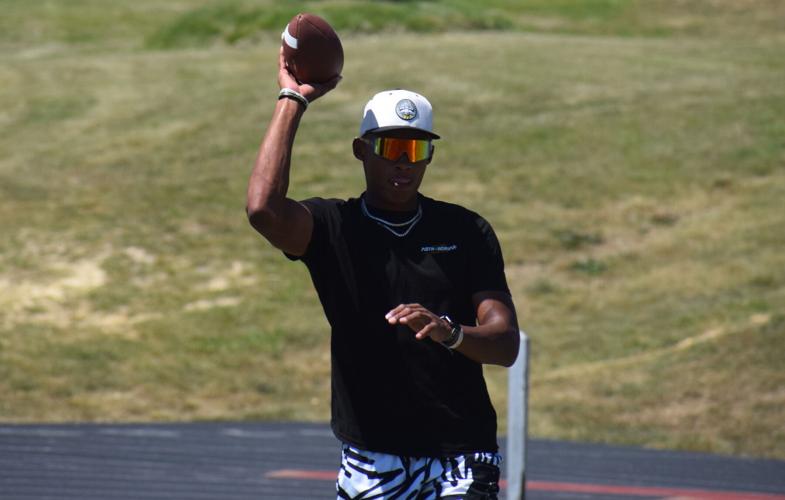 Josh Dobbs gets ready to throw the ball to a young player during Thursday's football camp at Dobyns-Bennett.

Cleveland Browns quarterback Josh Dobbs poses with a group of players during Thursday’s football camp at Dobyns-Bennett in Kingsport.

Cleveland Browns quarterback Josh Dobbs gets ready to throw a pass during his Thursday camp at Dobyns-Bennett.

Josh Dobbs gets ready to throw the ball to a young player during Thursday's football camp at Dobyns-Bennett.

KINGSPORT — Cleveland Browns quarterback Josh Dobbs was back in the Volunteer State sharing his knowledge of the game with a group of 140 youth at his football camp on Thursday at Dobyns-Bennett.

It was the second year the former Tennessee star conducted a camp in Kingsport, a place he learned about from former D-B standouts Malik Foreman and Devaun Swafford — Dobbs’ former UT teammates.

Dobbs also learned how passionate fans in the Tri-Cities are about the Vols.

“It’s amazing get back to East Tennessee. From my time in school, they supported me tremendously,” Dobbs said. “Even since graduating, the support and the love has been tremendous from this part of Tennessee. So it’s a lot of fun and the kids always have a great time. That’s what it’s all about: teaching them the game, teaching them how to compete and making sure that they enjoy every time they step on a football field.”

Dobbs hopes to enjoy his time in Cleveland after playing the last couple of seasons for the Pittsburgh Steelers, the Browns’ AFC Central Division rivals. Originally drafted by the Steelers in 2017, it was his second stint in Pittsburgh after playing one season with Jacksonville.

The upcoming season could offer his best chance to be a starter in the NFL. Quarterback Deshaun Watson is facing the possibility of suspension by the NFL because of a number of sexual misconduct lawsuits and Baker Mayfield is rumored to heading to Seattle in a trade in the coming days. The Browns also signed veteran Jacoby Brissett this past spring.

If given the chance, Dobbs feels he’s ready for the starting role.

“I know a lot of familiar faces with the high-powered offense, a lot of talent on the offensive side of the football,” he said. “For me, this was a great change of scenery. I know it’s a little tension doing in division, but it’s a business. I’m excited for the opportunity in Cleveland.

“You just control what you can and take it one day at a time. You focus on your preparation and when you get the opportunities, you go out and compete. The coaches, players and yourself all expect you to play at a high level.”

He looks back with great fondness to his days with the Vols, with whom he posted 23 wins as starting quarterback.

Some of his favorite moments include a Hail Mary touchdown pass to Jajuan Jennings to beat Georgia and rallying the Vols from a 21-point deficit to beat Florida 38-28.

However, he said his greatest memory came in the Tri-Cities when Tennessee beat Virginia Tech 45-24 at Bristol Motor Speedway in front of the largest live audience to see a football game. In that September 2016 game, Dobbs threw for three touchdowns and rushed for two in front of an NCAA-record 156,990 fans.

“I’d be remiss not to talk about right up the street, the Battle at Bristol against Virginia Tech,” Dobbs said. “Literally it felt like every person in the state of Tennessee was at the game. It was rocking and the most attended game in the sport’s history. To be a part of that, play well and represent the University of Tennessee on a big stage, it’s a memory every person who was a part of that day will never forget.”

He said he likes what he sees from the Vols heading into this season. As a former player, he enjoys the welcoming atmosphere second-year UT coach Josh Heupel has created.

Dobbs admitted there’s a part of him who wishes he could play in the current offense.

“It looks like a lot of fun. They go fast. You look up and the play clock is on 31 seconds and they’re already running another play,” he said. “It’s difficult on the defense because they only can play a couple of coverages. You have to get lined up and pray the offense messes up at that point. There’s a lot of big plays, a lot of one-on-one matchups and you score a lot of points. So jealous a little bit, but I’m happy for the players.”

He’s obviously thrilled to be in the NFL a fifth season, playing at the highest level and earning a great income. While it was well publicized during his days at Tennessee that Dobbs had options outside of football to join the aerospace industry, the love of the game and passing it on remains a passion.

“I look back on my football career and moments that these camps have taught me to come out and compete,” he said. “These opportunities, you’re able to refine your skill set, have fun and just enjoy the game. I remember being one of these kids that are out here, whether 6 or 16, those stages of my football career.”