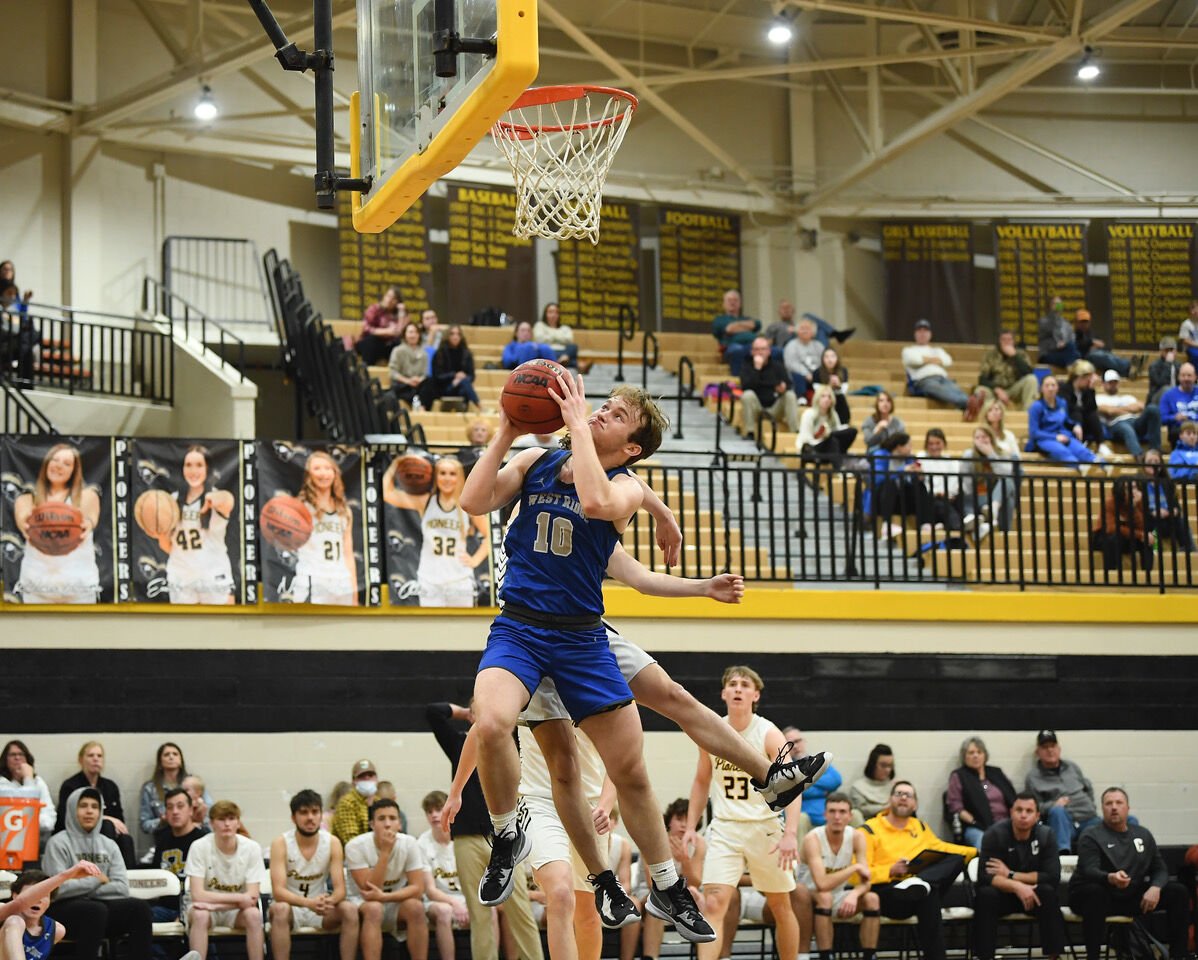 West Ridge’s Cooper Johnson (10) goes up for a shot against David Crockett during Friday night’s Big 5 Conference game in Jonesborough. 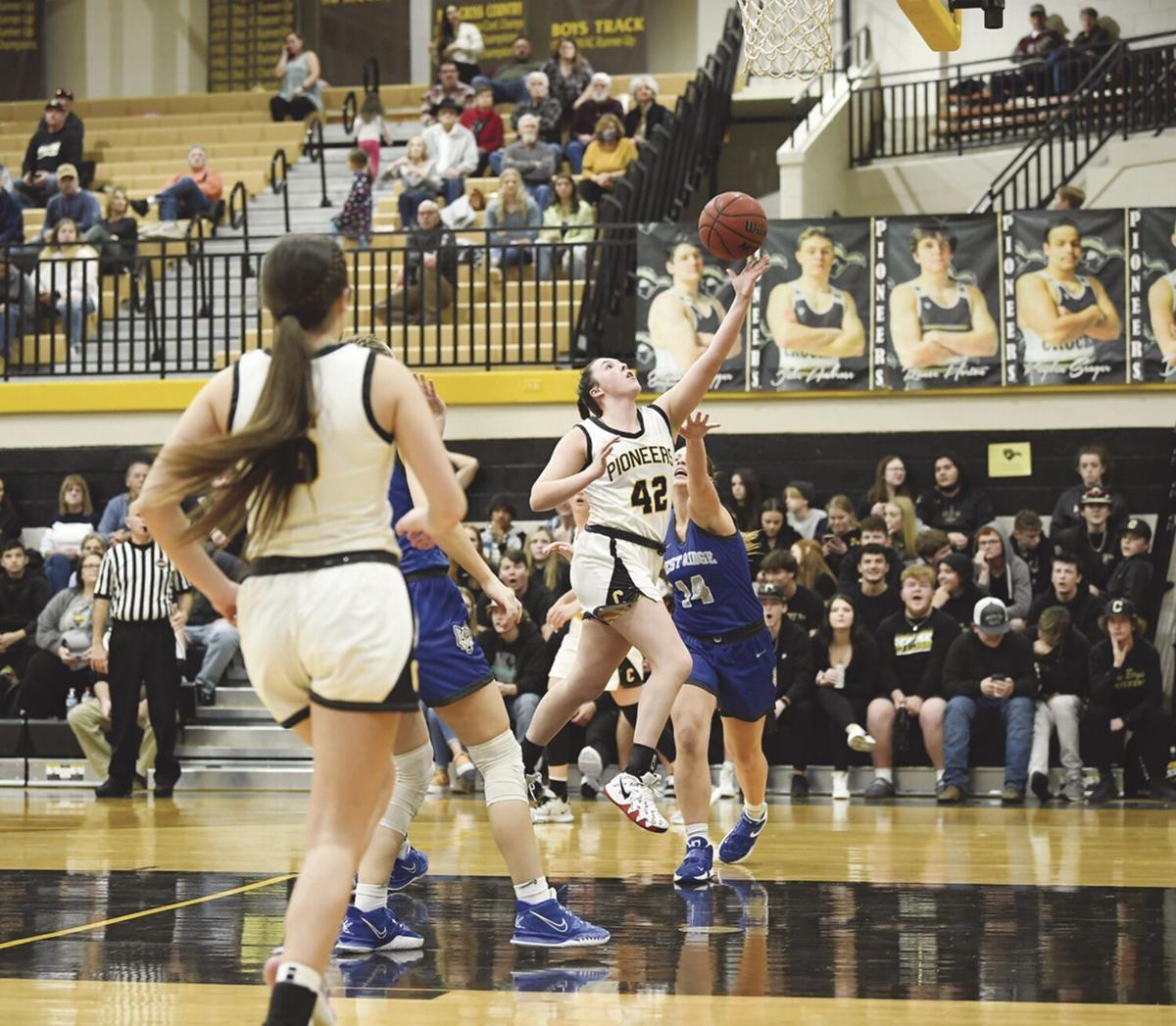 David Crockett’s Emily Trivett finishes off a drive to the bucket against West Ridge during Big 5 play on Friday in Jonesborough.

West Ridge’s Cooper Johnson (10) goes up for a shot against David Crockett during Friday night’s Big 5 Conference game in Jonesborough.

David Crockett’s Emily Trivett finishes off a drive to the bucket against West Ridge during Big 5 play on Friday in Jonesborough.

JONESBOROUGH — It might have been one of the slowest starts so far this season for the David Crockett boys basketball team, but Friday’s Big 5 Conference game sure finished in a flurry.

Dawson Wagner scored a game-high 22 points to lead Crockett (12-7, 1-1), but the real story quickly turned to freshman Jacob Arnold. The smallest player on the floor put up 20 points, made three critical 3-pointers and went 11-for-12 from the free throw line.

“(Jacob) is going to be special,” Crockett coach Cody Connell said. “Eleven of those came from the free-throw line. ... The last 3-pointer he hit was huge because it was a 10-point game and that put it back up to 13.

“Dawson is hard to guard off the ball and if he has any room, he’s at least going to pull the jumper or get to the rim,” Connell added.

In the last 2:30 of the second quarter, Connell’s quintet seized the lead for the first time and never looked back.

“We actually started playing the game of basketball. In the games that we’ve gotten beat, we’ve come down the floor and it’s been one pass and a shot,” Connell said. “Tonight, I feel like we were running an offense and making the extra pass. That’s the biggest thing for us: We’ve got so many guys that can play the game and do different things.

“We just have to find ways to get everyone into the ballgame and I feel like we did that tonight.”

The Wolves (12-8, 0-3) got 13 points from Wade Witcher and 11 from Cooper Johnson, but they could not overcome 21 turnovers. Most came in the third quarter when Crockett outscored the Blountville bunch 19-8.

“In the last two minutes of the second quarter and the beginning of third, we had some easy shots and we just turned it over,” West Ridge coach John Dyer said. “They got the momentum after that. They have an excellent basketball team and Crockett played great tonight.”

West Ridge has a quick turnaround. The Wolves host Micah Simpson and Morristown East (19-1) on Saturday at 5:30 p.m. Simpson, one of Class 4A’s best guards, averages more than 25 points per game.

“There’s nobody in the state that’s played a tougher schedule than we have since Christmas,” Dyer said.

Bella Ferguson may be only a freshman, but she stepped up in the biggest of ways in Crockett’s 60-53, three-overtime win over West Ridge.

She accounted for 24 points, scoring seven in the third OT.

“I honestly thought it was four overtimes and it seemed like it took five hours,” Crockett coach Thomas Gouge said. “Bella is just a freshman, but she’s our leader and the girls look up to her. The seniors want her to lead and she stepped up tonight.

“She made some big-time baskets for us tonight.”

The Lady Wolves (13-7, 0-3) trailed by seven points with 90 seconds left in the third overtime but got within three with less than 45 seconds and had the ball. A bad shot and ensuing defensive rebound pretty much put the game on ice for Crockett (16-2, 2-0).

Emily Trivette poured in 23 points and made three crucial 3-pointers for the Lady Pioneers.

The Lady Wolves ultimately could not overcome some early shooting woes.

Jaelyn West ended up leading West Ridge in scoring with 17, getting 14 in the fourth quarter and the ensuing extra periods. Emma Niebruegge added 15.

“We’ve been struggling and that’s something that we’ve been telling our kids,” West Ridge coach Kristi Walling said. “This one hurts, but that was some toughness that I haven’t seen in a long time in those kids.

“I’m super proud of them. I told them that we just have to trust the process and I feel like we made a step forward in the right direction.”

David Crockett won one game in a nail-biter and the other in a runaway on Friday at home against West Ridge. After the Lady Pioneers fought of…