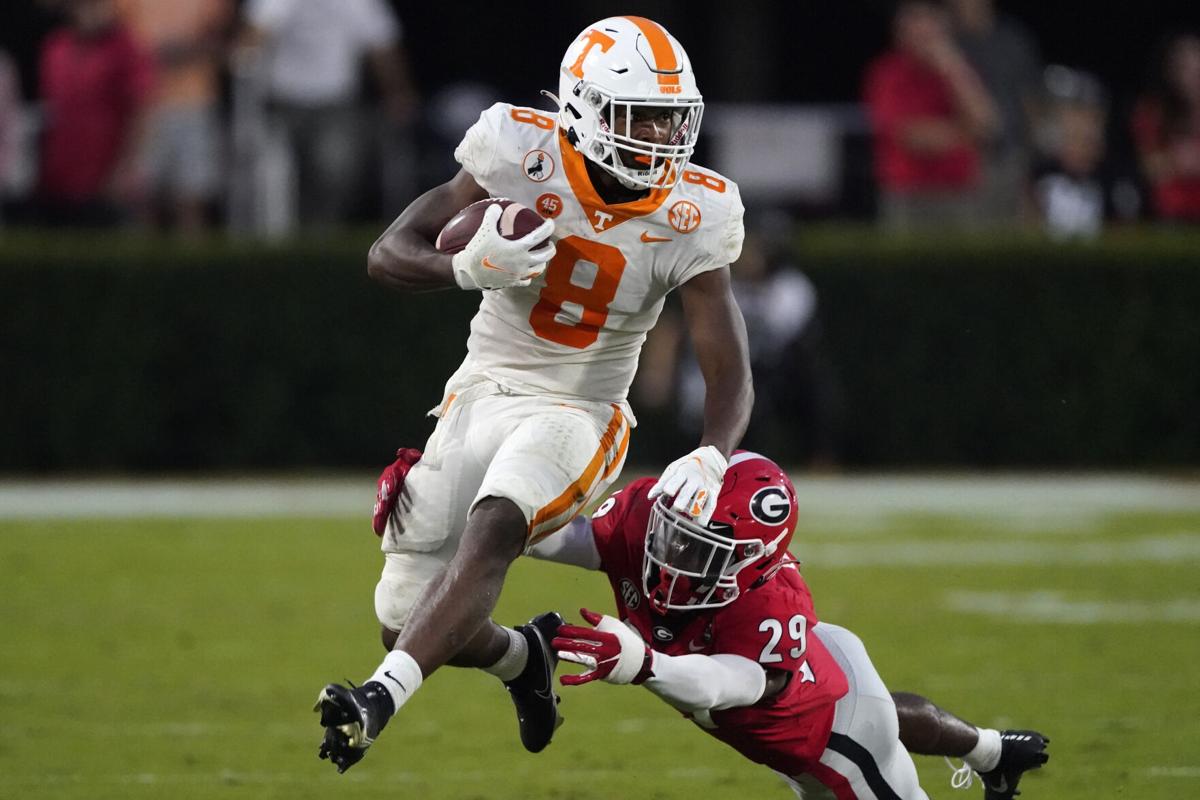 Tennessee running back Ty Chandler (8) breaks away from Georgia defensive back Christopher Smith (29) after a catch in the second half of their Oct. 10 game in Athens, Ga. After having minus-1 rushing yard against the Bulldogs, the Vols will try to get their ground game back in gear Saturday at home against Kentucky.

Kentucky linebacker Jordan Wright (15) celebrates after scoring a touchdown against Mississippi State during their game on Oct. 10 in Lexington, Ky.

Tennessee running back Ty Chandler (8) breaks away from Georgia defensive back Christopher Smith (29) after a catch in the second half of their Oct. 10 game in Athens, Ga. After having minus-1 rushing yard against the Bulldogs, the Vols will try to get their ground game back in gear Saturday at home against Kentucky.

Kentucky linebacker Jordan Wright (15) celebrates after scoring a touchdown against Mississippi State during their game on Oct. 10 in Lexington, Ky.

KNOXVILLE — The No. 18 Tennessee football team seems to have the perfect opponent for a bounce-back game.

Kentucky has not won in Knoxville since 1984, suffering a string of 17 straight losses at Neyland Stadium going into Saturday’s game with Tennessee (noon, SECN). The Vols have won 33 of the past 35 games in this border rivalry.

But only Georgia and Florida have more wins than Kentucky in the Southeastern Conference’s Eastern Division the past three seasons, and Tennessee coach Jeremy Pruitt sees the Wildcats as a team that could easily be undefeated instead of 1-2 after losses to Auburn and Mississippi.

“It’ll be a tremendous challenge for us to find out a little bit about who we are,” Pruitt said.

Last week, Kentucky just throttled Mike Leach’s Air Raid offense, picking off six passes in a 24-2 win over Mississippi State. Coach Mark Stoops said playing this SEC-only schedule this season is a grind, one that gives the league an NFL-like parity and forces everyone to hit the reset button.

And this game matters because it’s Tennessee.

“It is a team that is on your side of the league,” said Stoops, who is 1-6 against Tennessee. “It’s an East game, it’s a rival game, it’s our neighbor. It’s an important football game.”

Tennessee beat Kentucky 17-13 last year in Lexington despite the Wildcats holding the ball for more than 41 minutes. The Vols got a couple of sacks though Kentucky attempted only seven passes.

“No matter whether they pass the ball 48 times a game or run the ball 60 times a game, we’re just trying to go out there and play some good football and win the ball game,” Tennessee defensive end Matthew Butler said.

Tennessee’s eight-game winning streak ended with the loss at Georgia. Worse, the Vols were outscored 27-0 in the second half. Pruitt and the Vols have been working to clean up mistakes, which included too many penalties and three turnovers — including the first of the season for senior quarterback Jarrett Guarantano.

The Vols also allowed five sacks, twice as many as through the first two games combined.

Kentucky seeks to jump-start its passing game after several fits and starts. Terry Wilson was just 8-of-20 passing for 73 yards and sacked twice but managed to hit seven targets at least once, including tight Keaton Upshaw for a touchdown. The object is getting them the ball more often.

“We’re going do the best we can do to execute more this next game,” Kentucky’s top receiver Josh Ali said. “You just got to keep everybody up, no negative energy and focus on what we have to do this weekend.”

Tennessee finished with minus-1 yard against Georgia, and running back Eric Gray said that loss offered the Vols a chance to look in the mirror and realize they can be better. Running might not be much easier against Kentucky, though. The Wildcats are eighth nationally in run defense, holding opponents to 83.3 yards.

“They got a big front four on the defensive line, and I believe our offensive line will put them to the test this week,” Gray said.

Kentucky has been very good either on offense or on defense — not both. Last week was a perfect example: The Wildcats gained just 157 yards but won thanks to six interceptions.

Of course, there’s also the question of whether they can win in Knoxville for the first time this century.

Tennessee will have the SEC’s sack leader back for kickoff Saturday. Outside linebacker Deandre Johnson was ejected for targeting in the first quarter of the loss to Georgia after a hit on the quarterback. Johnson still leads the league with 3½ sacks.

Copyright 2020 The Associated Press. All rights reserved. This material may not be published, broadcast, rewritten or redistributed without permission.