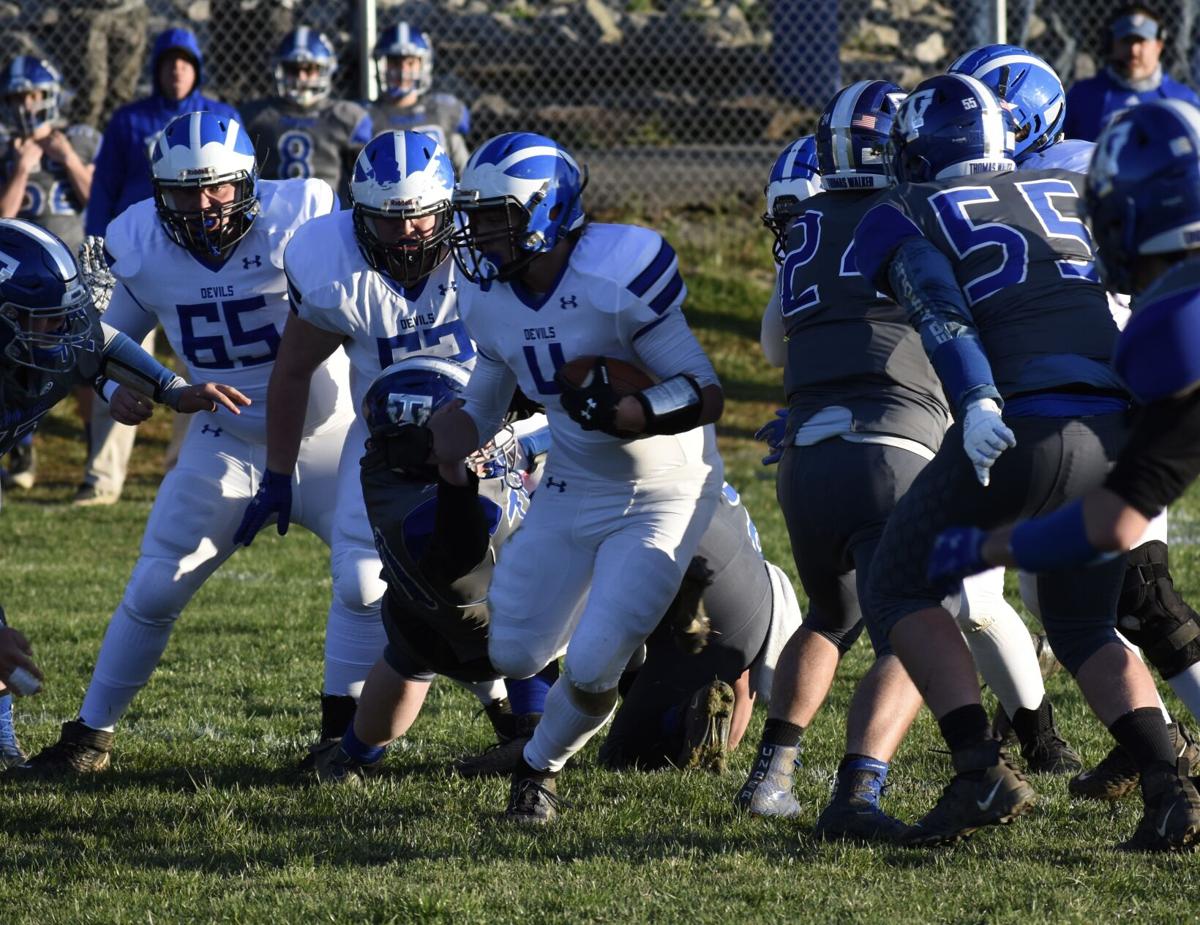 Castlewood’s Jeremiah Allen (4) breaks through the line during Friday’s Cumberland District game against Thomas Walker in Ewing. Allen ran for 136 yards and two touchdowns on 29 carries in the Blue Devils’ 51-12 win. 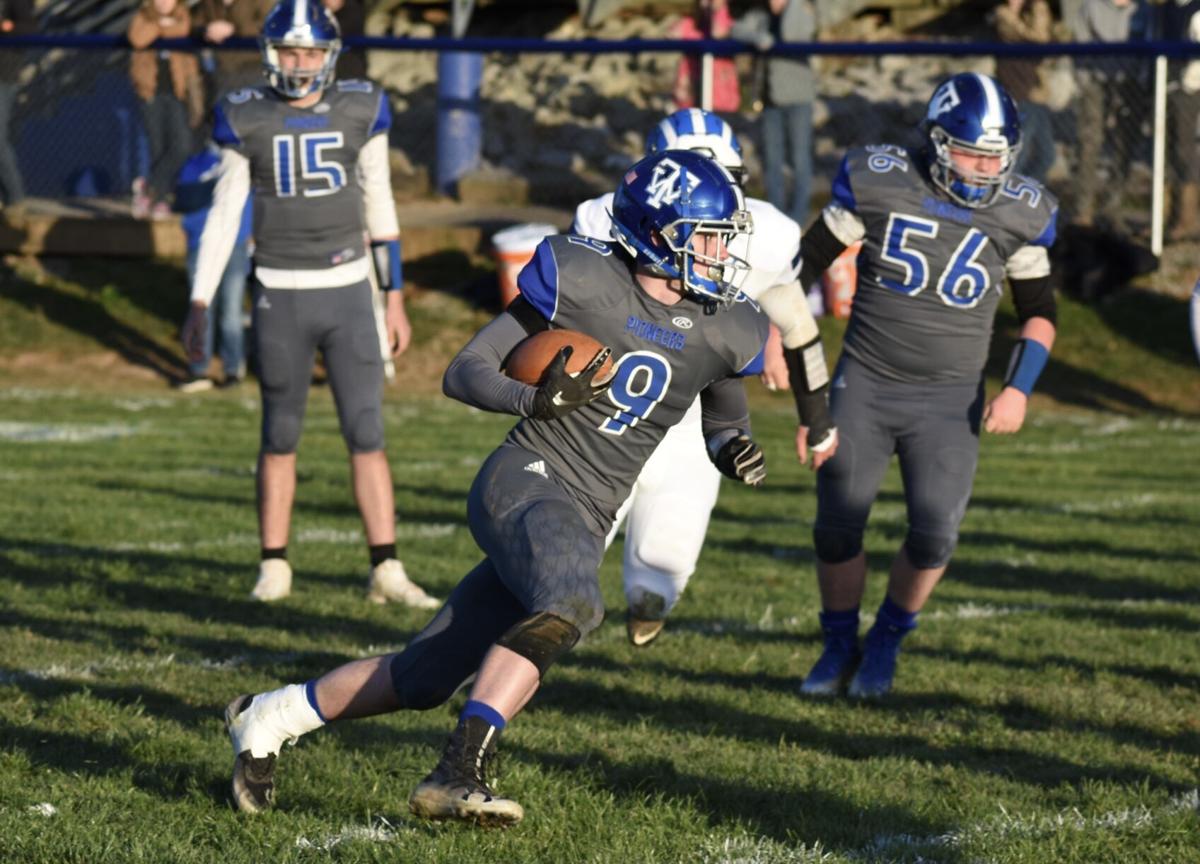 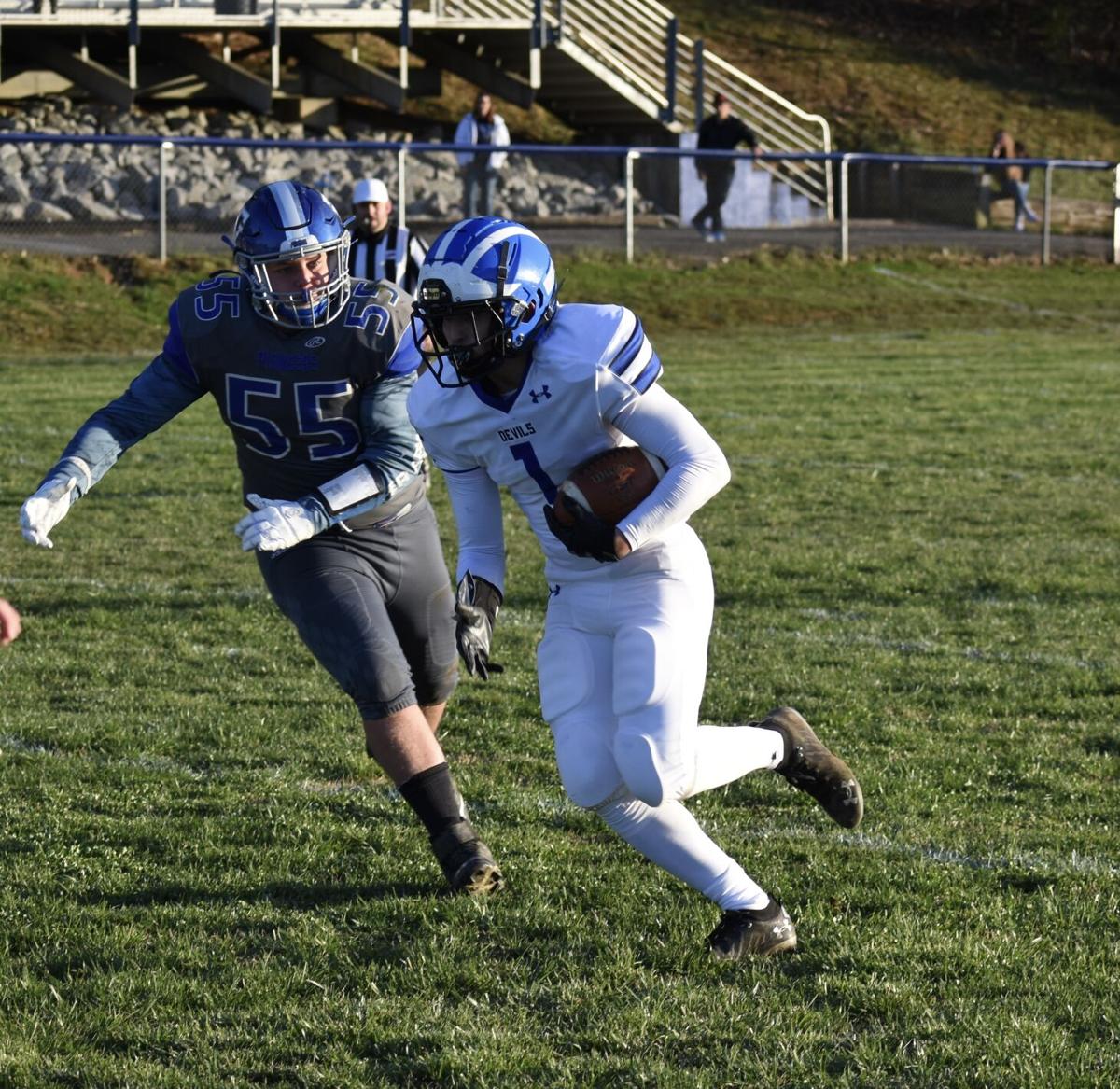 Castlewood’s Jeremiah Allen (4) breaks through the line during Friday’s Cumberland District game against Thomas Walker in Ewing. Allen ran for 136 yards and two touchdowns on 29 carries in the Blue Devils’ 51-12 win.

EWING — The 1-2 punch of Landen Taylor and Jeremiah Allen has been a potent one for the Castlewood football team all season.

On Friday night, the pair landed a knockout blow in a 51-12 Cumberland District win over Thomas Walker.

Taylor alone accounted for five scores — four rushing and one passing — and 279 yards of total offense. He carried the ball 17 times for 143 yards and went 5-for-7 through the air for 136 yards.

“We had to make some adjustments because they were cutting us up front and we hadn’t seen that yet this year,” Castlewood coach Chris Lark said. “I thought our guys played really well and I thought we were prepared for what they wanted to do.”

Allen had another big night, getting the call 29 times for 136 yards and making two trips to paydirt.

“I thought Landen played well tonight and I thought our receivers did a good job of getting open and catching the ball,” Lark said.

If there was one negative for the Blue Devils, it was that they lost three fumbles.

After a tough loss to J.I. Burton, the Blue Devils needed to win their final four games in order to have a shot at the playoffs, and Lark and Co. did not disappoint the Castlewood faithful.

“We knew that when we lost to J.I. Burton, we had to run the table,” said Lark, whose team will learn its Region 1D opponent on Sunday. “I’m really happy for our players, staff and our school to come out and win four games in a row.”

The Pioneers (1-5) had a tough time getting anything going, especially in the second half. They mustered only 18 second-half yards and failed on four fourth-down conversion attempts.

“(Allen and Taylor) run hard and they’re well coached,” Thomas Walker coach Nick Johnson said. “They do their thing and they don’t deviate from it. They run hard and it’s all about effort.”

Kenny Ball — one of the focal points of the Pioneers’ offense — only had 18 yards on five carries but one went for a score in the first quarter. Their other TD came on a reverse to Elijah Harber in the second quarter.

Thomas Walker ran for only 64 yards. Quarterback Zack Kidwell was consistently harassed, getting sacked twice. He went 10-for-23 for 72 yards.

“We’re just not very fast and we don’t have much speed,” Johnson said. “We don’t have receivers to throw to and it makes it a lot easier for guys to play seven, eight or nine guys in the box and key on Kenny, Jaron (Warf) or Jason (Cowden).”

Johnson’s crew will finish up the season in a plus-one game next week at Hurley.

“Being from Grundy, I know all about playing at Hurley,” he said. “It’s a tough place to play, but they’re a lot like us being young. They play hard and that’s the one constant with them.”