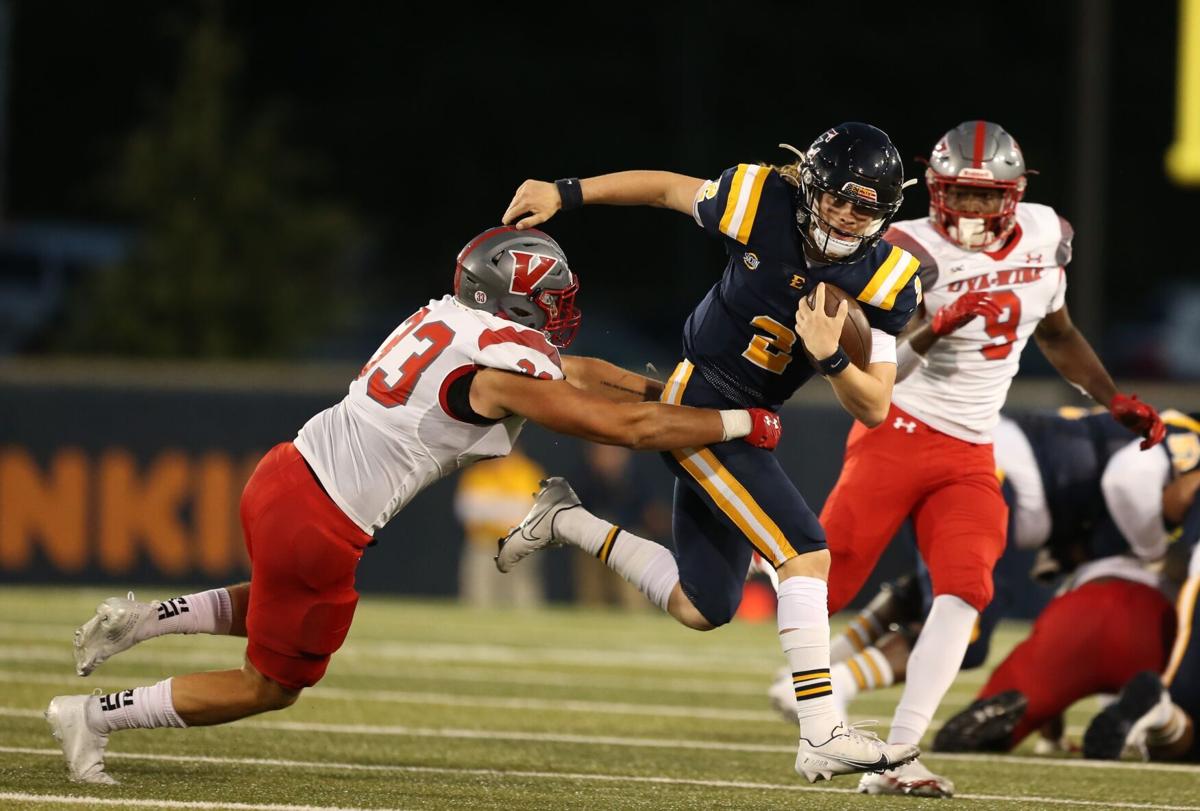 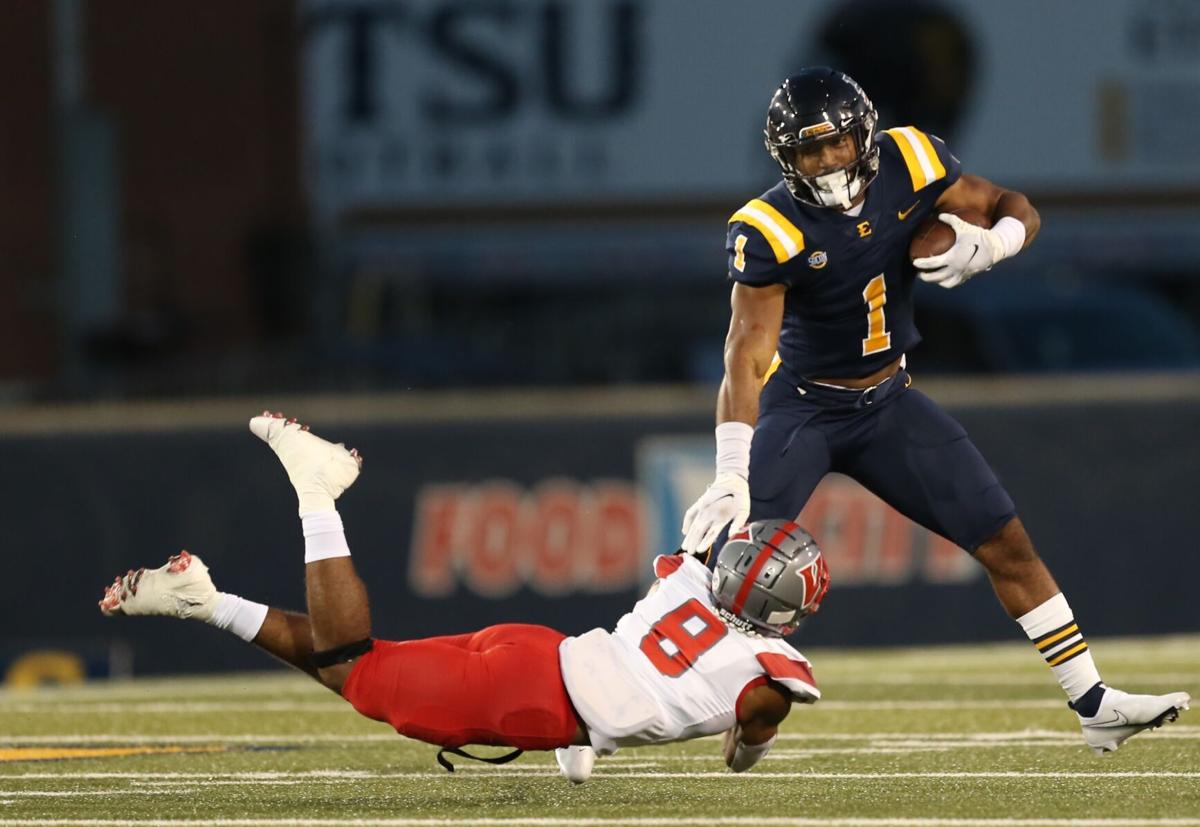 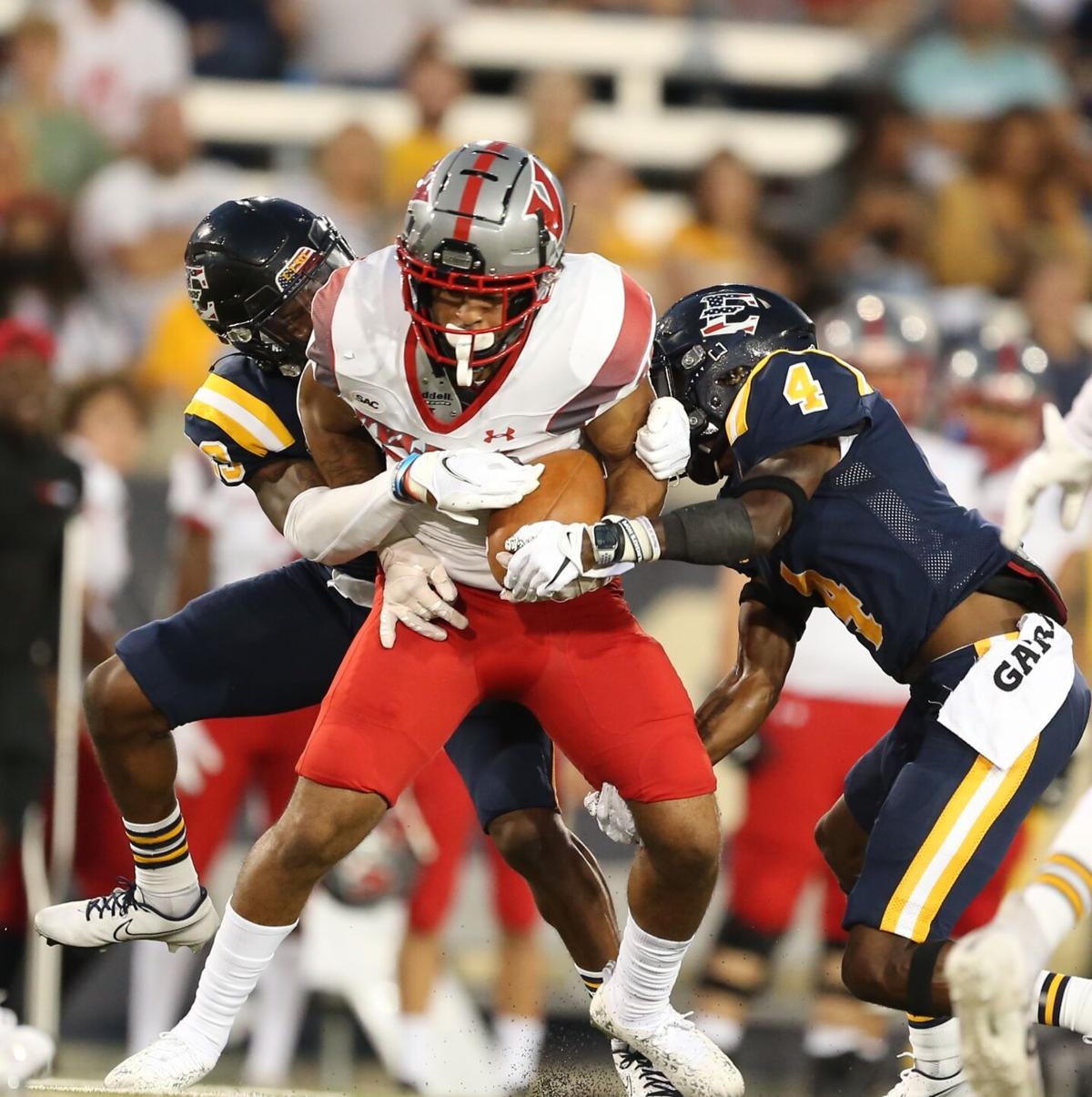 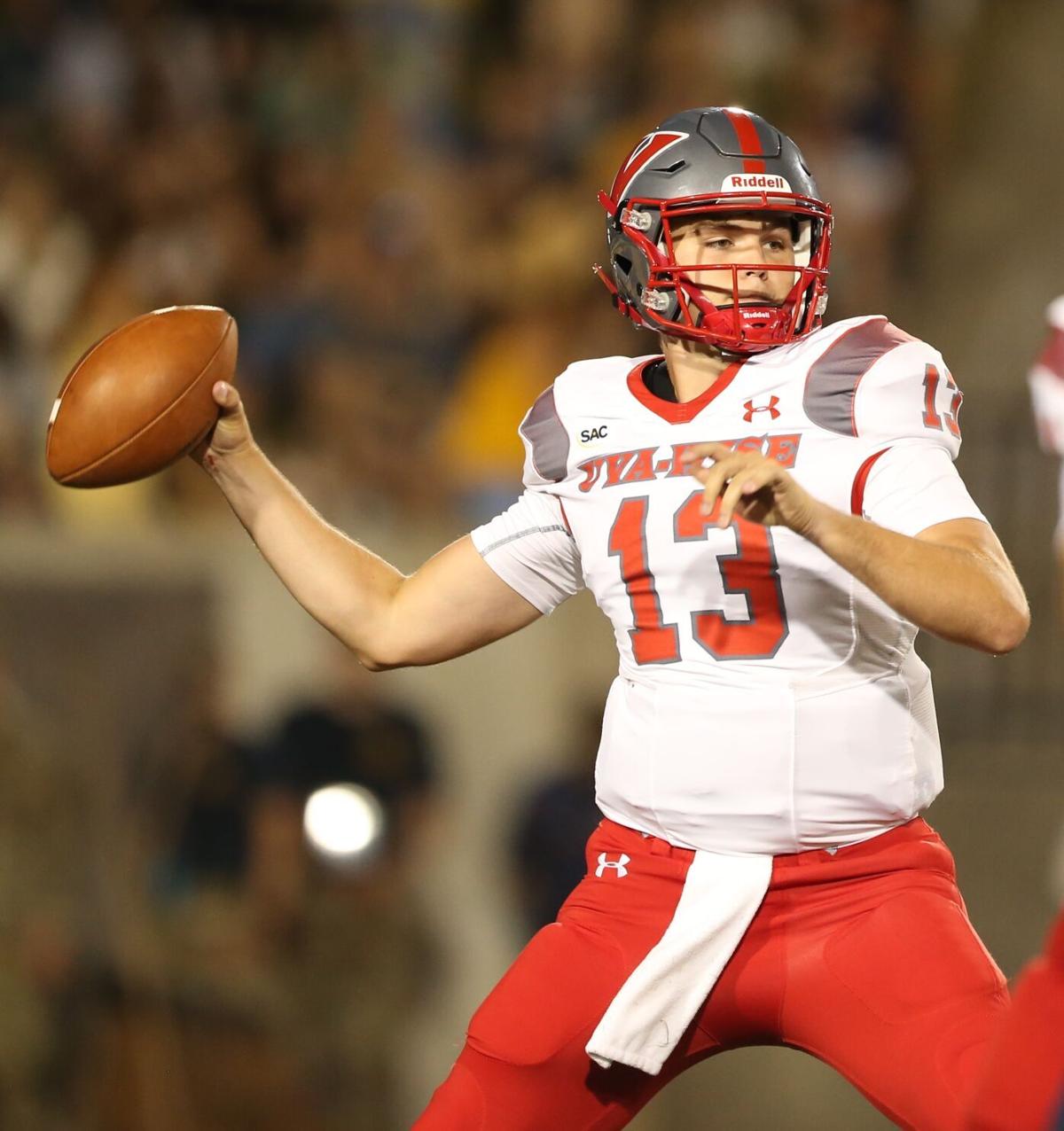 UVA Wise quarterback Lendon Redwine looks for a receiver during a game against East Tennessee State at Greene Stadium in Johnson City. 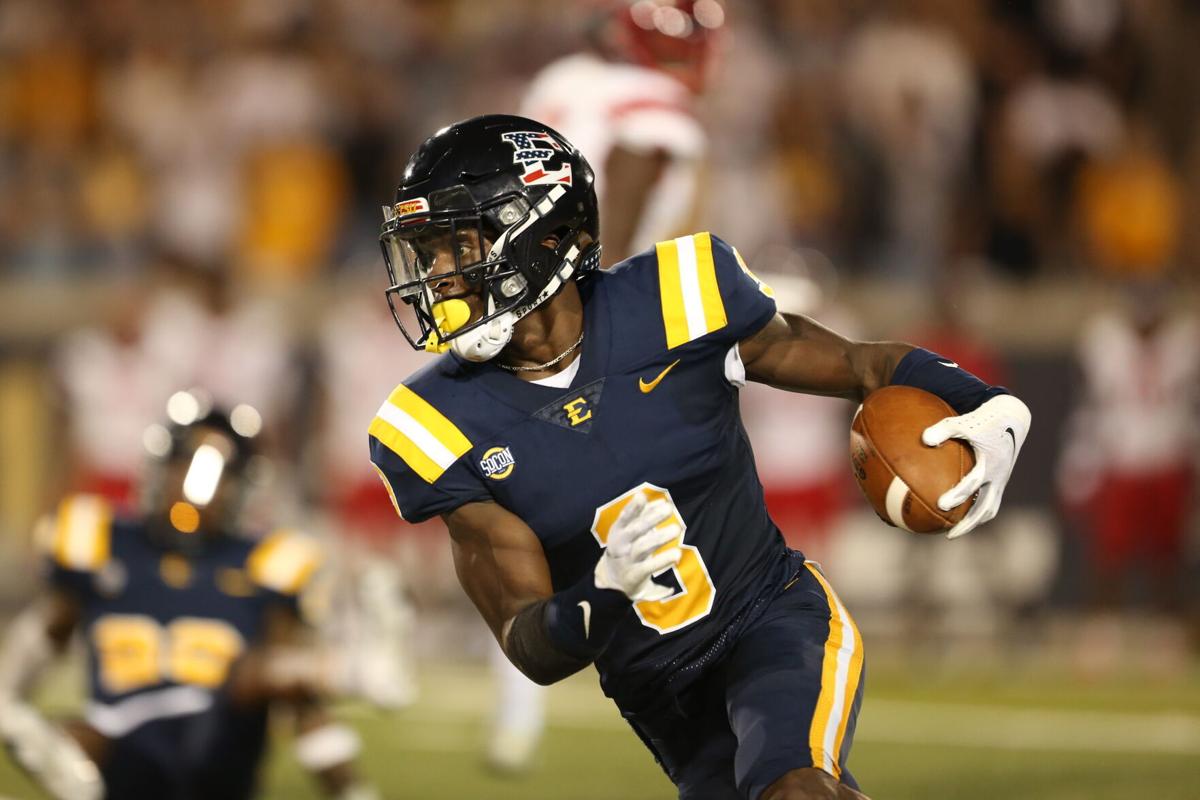 ETSU’s Tyree Robinson sets up the Bucs’ first TD with an interception return. 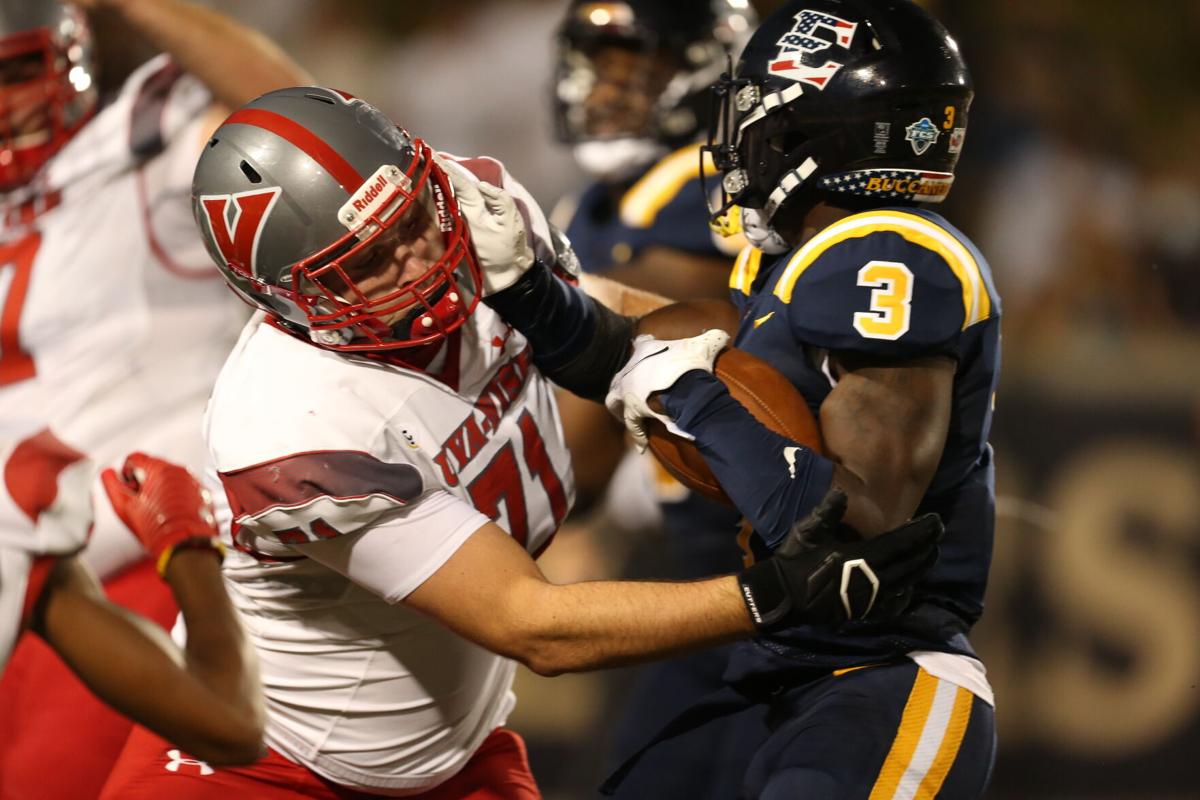 Tyree Robinson is brought down by UVA Wise’s Kyle Kruszewski after his interception.

UVA Wise quarterback Lendon Redwine looks for a receiver during a game against East Tennessee State at Greene Stadium in Johnson City.

ETSU’s Tyree Robinson sets up the Bucs’ first TD with an interception return.

Tyree Robinson is brought down by UVA Wise’s Kyle Kruszewski after his interception.

The Bucs, ranked 15th in the FCS Top 25, got two big touchdowns from Jacob Saylors to post a workmanlike 45-14 victory over Virginia-Wise in a nonconference football game Saturday night in front of a record crowd at Greene Stadium.

Saylors rushed for 75 yards and caught three passes for another 75. Quay Holmes also scored two touchdowns for the Bucs (2-0).

A stadium-record crowd of 9,720 watched ETSU take on the NCAA Division II Cavaliers (1-1), and the grassy bank behind the north end zone was packed, likely with the greatest number of people since the stadium opened in 2017.

ETSU’s Tyler Riddell finished 13-of-18 passing for 201 yards and two touchdowns before giving way to Brock Landis for the fourth quarter. Riddell was intercepted by Michael King in the third for the Bucs’ first turnover of the season.

Riddell is showing a propensity for the long ball. He completed passes of 43 yards to Malik Murray and 33 yards to Will Huzzie. Murray also had an 8-yard touchdown catch, his second of the season.

It was the perfect play call.

UVA Wise sent a heavy blitz just as the Bucs called a screen pass late in the first quarter.

As all the pass rushers slipped by the offensive linemen, Riddell flipped a short pass to Saylors, who took it up the left sideline and went untouched for a 64-yard touchdown and a 14-0 lead.

It was the first of two TDs for Saylors, who also scored on a 16-yard run.

The ETSU offense sputtered at the start, going three and out on its first two possessions. The defense picked up the slack when safety Tyree Robinson stepped in front of a Redwine pass and intercepted it in stride. Robinson returned it 22 yards to the UVA Wise 3-yard line and Holmes took it in from there for a 7-0 lead.

The Cavs moved the ball on their first drive, thanks to a 17-yard run by Caleb Grant and Redwine completing his first five passes. It wound up as an empty possession, however, when Drew Cassidy missed a 30-yard field goal.

UVA Wise got the first touchdown of the season on the Bucs’ defense with 9:03 left in the second quarter when Redwine hit Heckstall for a 13-yard scoring pass. The drive was set up by a 50-yard kickoff return by Markell Harrison.

Redwine and Heckstall hooked up again for a 3-yard TD in the third quarter. Redwine also connected with Darrien Newton for a 2-point conversion.

ETSU freshman running back Bryson Irby, who starred in preseason scrimmages, saw his first action and finished with 42 yards on nine carries.

Huzzie was ETSU’s leading receiver with six catches for 84 yards.

Holmes finished with 62 yards on 16 carries.

Donovan Manuel was ejected in the third quarter after being penalized for targeting on a tough hit on Rodney Hudson. Manuel will be forced to sit out the first half of ETSU’s next game.

Stephen Scott, the star of the win over Vanderbilt, started again in Folks’ absence. Jalen Porter filled in for Bockrath and intercepted a pass in the first quarter.

Jay Sandos, known as Voice of the Bucs, missed the game after testing positive for the coronavirus. He was replaced as the radio play-by-play man by Robert Harper, usually the sideline reporter.