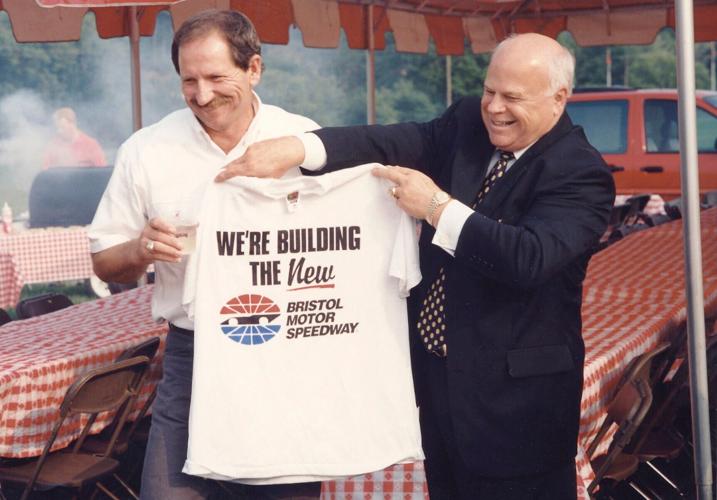 In this 1996 photo, seven-time NASCAR champion Dale Earnhardt, left, and Bruton Smith are shown at a press conference to announce Smith’s purchase of Bristol Motor Speedway. 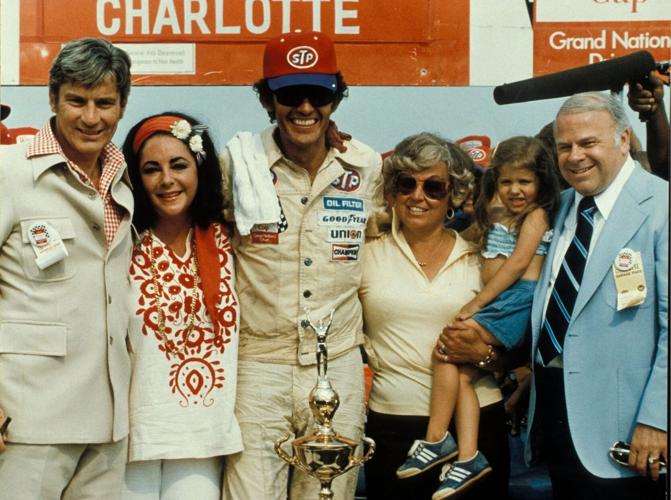 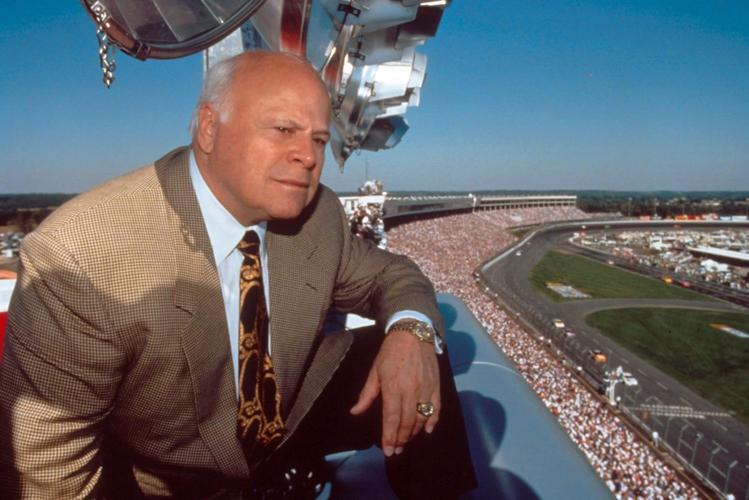 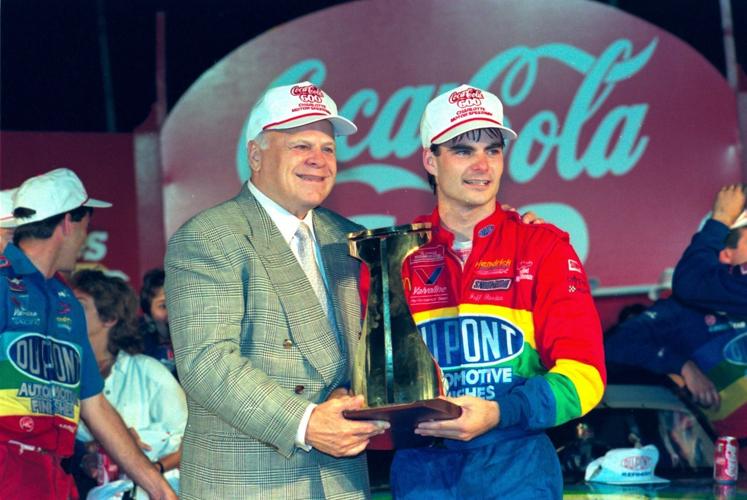 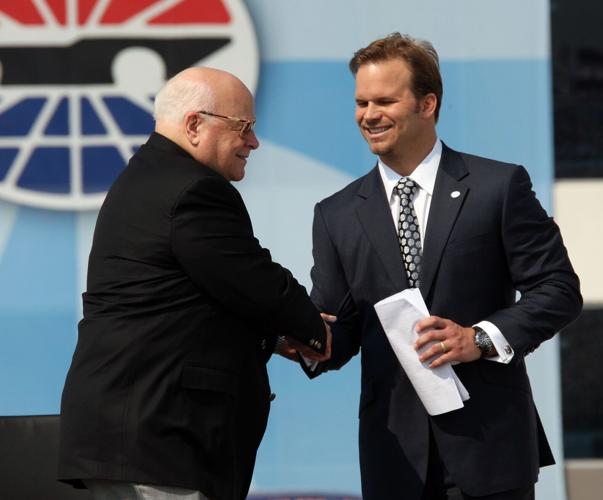 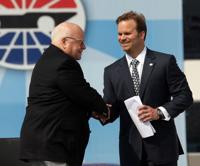 Bruton Smith is congratulated by son Marcus after the announcement that Smith would be inducted into the NASCAR Hall of Fame.

In this 1996 photo, seven-time NASCAR champion Dale Earnhardt, left, and Bruton Smith are shown at a press conference to announce Smith’s purchase of Bristol Motor Speedway.

Bruton Smith is congratulated by son Marcus after the announcement that Smith would be inducted into the NASCAR Hall of Fame.

Bruton Smith, the legendary businessman and racing promoter, died Wednesday. He was 95.

Smith, who was inducted into the NASCAR Hall of Fame in 2016, was the founder and executive chairman of Sonic Automotive, which operates over 160 dealerships in 23 states, and Speedway Motorsports, which has 11 premier properties, including Bristol Motor Speedway, Charlotte Motor Speedway and Nashville Superspeedway, which is set to host this weekend’s NASCAR Cup Series race.

SMI purchased Bristol Motor Speedway from Larry Carrier in 1996 at the price of $26 million. Smith began a huge expansion of the facility and by April 1997, it had grown from a capacity of 71,000 to 118,000, surpassing Neyland Stadium as the largest sports venue in Tennessee.

It eventually grew to 160,000 before remodeling for different fan experiences and an expansion of seats put it at a capacity of 147,000. In 2016, Smith’s vision of a college football game between Tennessee and Virginia Tech set an NCAA record of 156,990 in attendance.

He also oversaw the rebuilding of Bristol Dragway into one of one of the world's premier drag strips.

“It has been a true honor and privilege to have grown my entire career working for and being mentored by entrepreneur titans, Bruton Smith and his son, Marcus," BMS President Jerry Caldwell said. "Together they have created a family-like atmosphere at Speedway Motorsports, making today’s news of Bruton’s passing a sad day for all of us at Bristol Motor Speedway and Dragway.

"The impact of Bruton’s contributions to the sports and entertainment world are too many to name, but his lasting legacy of building world-renowned destinations will stand the test of time. His contributions personally touched so many in the state of Tennessee throughout his businesses and philanthropic endeavors.

“His vision and passion for creating the most amazing experiences for our guests lives on today through his mantra of, ‘We work for the fans.’ We will continue to carry the torch he built and lit for us to the best of our abilities to honor and celebrate the legend we lost today.”

Born in 1927 on a farm in Oakboro, North Carolina, Smith worked at a sawmill as a teenager and later at a hosiery mill. He began his highly successful career in the automotive industry with the sale of a 1939 Buick sedan. His love of racing led to him trying his hand as a driver before becoming a promoter before he was 18.

“There was a whole lot of unrest with the drivers and car owners at that time,” Smith said in a 2005 interview. “We had a meeting, and I was unlucky enough to be appointed a committee of one to promote a race. I had never done that, but I promoted a race in Midland, North Carolina, and I made a little bit of money, so I thought I’d try it again.”

His racing and business careers were put on hold as he served two years as a paratrooper in the U.S. Army.

In 1959, he teamed with NASCAR star Curtis Turner to build Charlotte Motor Speedway, which hosted its first race, the World 600, in 1960. Ironically, a trip to that race inspired Larry Carrier and Carl Moore to build Bristol Motor Speedway.

Smith later moved to Illinois, where he turned his attention to his dealerships. His company became one of the largest car dealers in the nation with Smith based out of his Town & Country Ford dealership in Charlotte.

His true love was the racing business and he founded Speedway Motorsports in 1994 to consolidate his motorsports holdings. In February 1995, it became the first motorsports company to trade on the New York Stock Exchange.

“I love the racing business. I want to contribute more and more,” Smith said in a 2015 interview. “You hear us preach about ‘fan friendly.’ I think that is a driver for me to just do more things. I enjoy the contributions I’ve been able to make to the sport.”

“When you think about the Charlotte Motor Speedway and Bristol and tracks like New Hampshire and Sonoma and Atlanta, he’s been the best,” 2019 NASCAR Hall of Fame inductee and fellow automobile dealer Roger Penske told NASCAR.com in 2016. “There’s no question. He set the bar.”

“His mind is racing all the time; he’s done so much for the sport,” said Rick Hendrick, an auto dealer and fellow NASCAR Hall of Famer, in a 2016 interview with NASCAR.com. “He’s so brave to step out and try things that have never been tried before. He helped build this sport.”

Smith founded Speedway Children's Charities in 1982 as a memoriam and legacy to his son, Bruton Cameron Smith, who passed away at a very young age. Under Smith’s leadership, Speedway Children’s Charities has distributed more than $61 million to local organizations across the country that improve the quality of life for children in need.

Locally, the Bristol Chapter of Speedway Children’s Charities was founded in 1996 and has distributed nearly $14 million since its inception. Its flagship fundraiser, the Pinnacle Speedway in Lights, is the region’s premier holiday lights display.

Survivors include sons Scott, Marcus and David; his daughter, Anna Lisa; their mother, Bonnie Smith; and seven grandchildren. Information regarding funeral arrangements will be released at a later date.