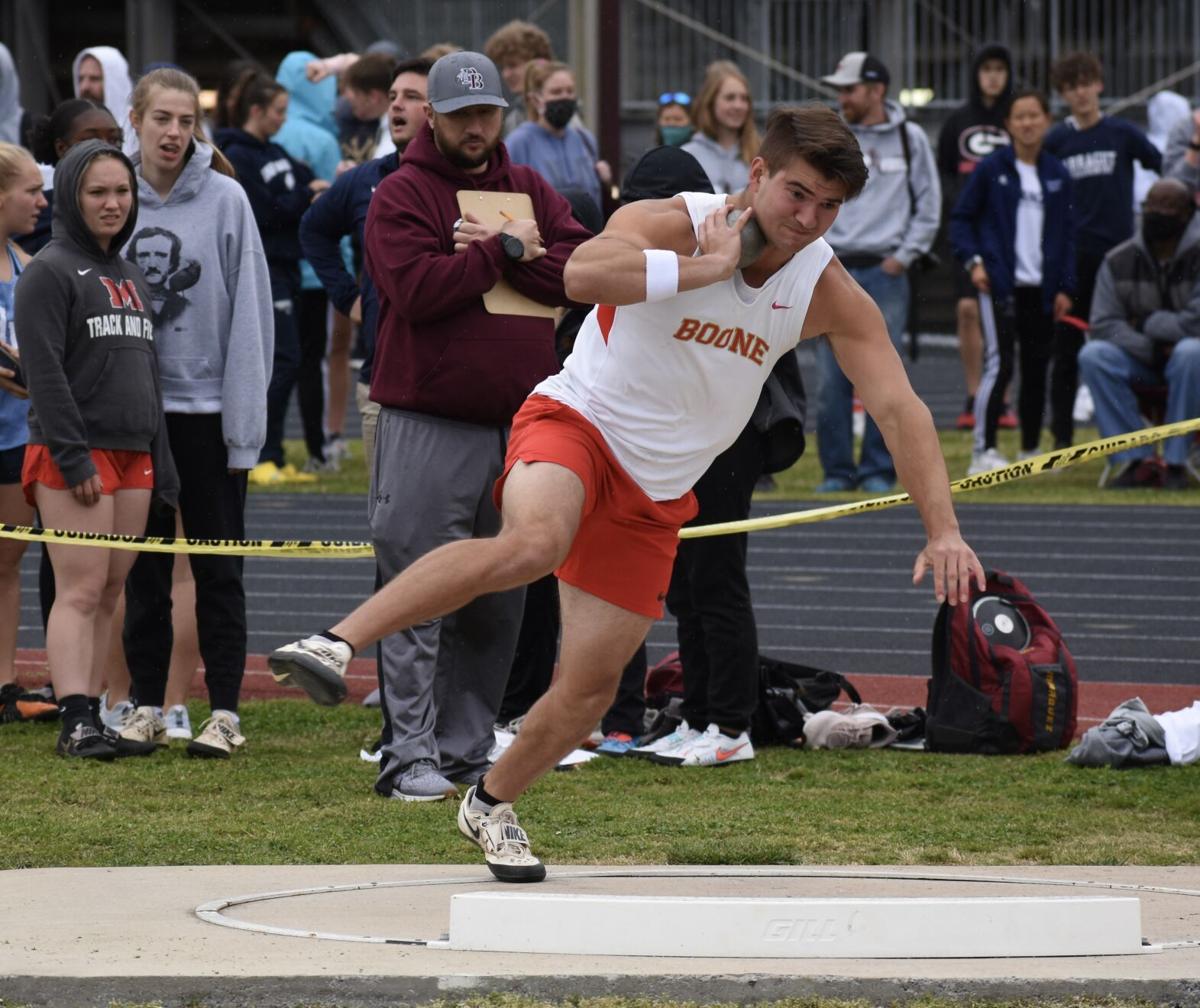 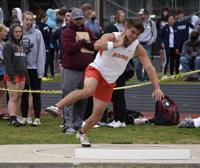 Daniel Boone’s Eli Penix gets ready to throw the shot put, an event he won on Saturday with a throw of 54-6.5. 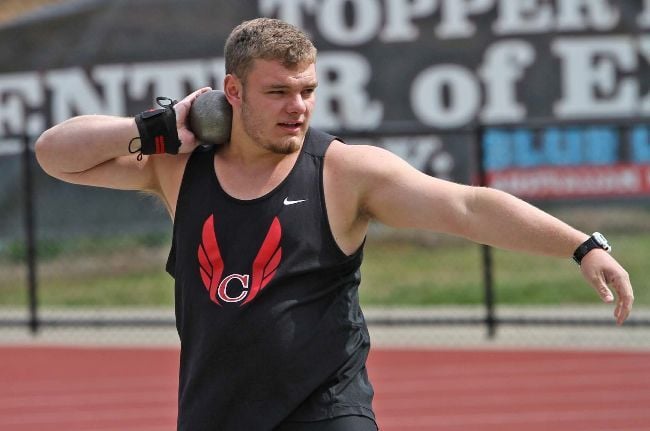 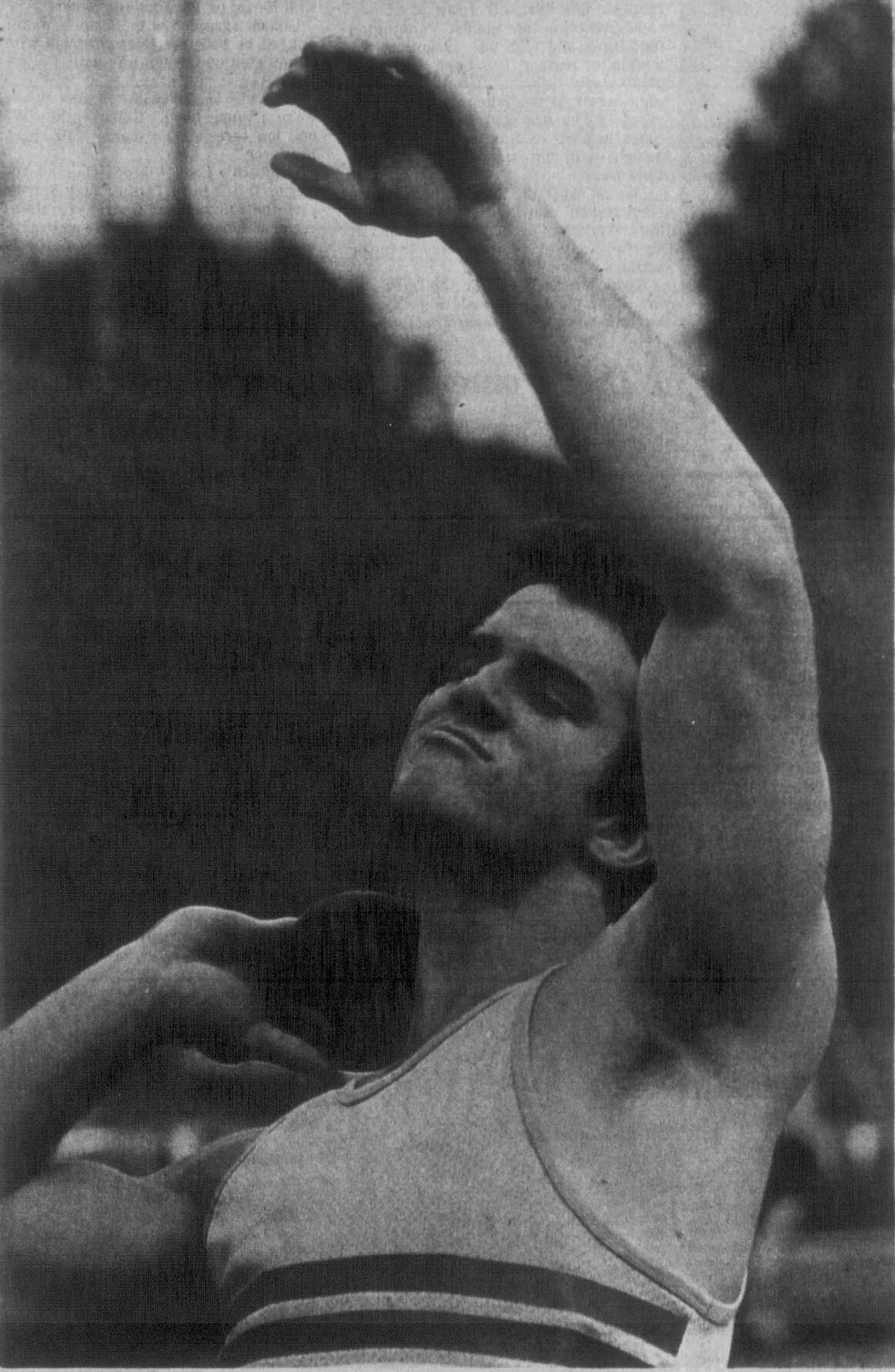 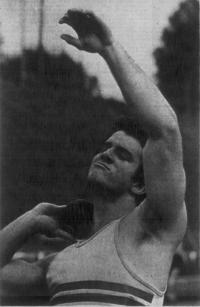 Dobyns-Bennett throwing legend Hal Miller Jr. readies for a shot-put throw in the 1979 District I track meet in Kingsport. 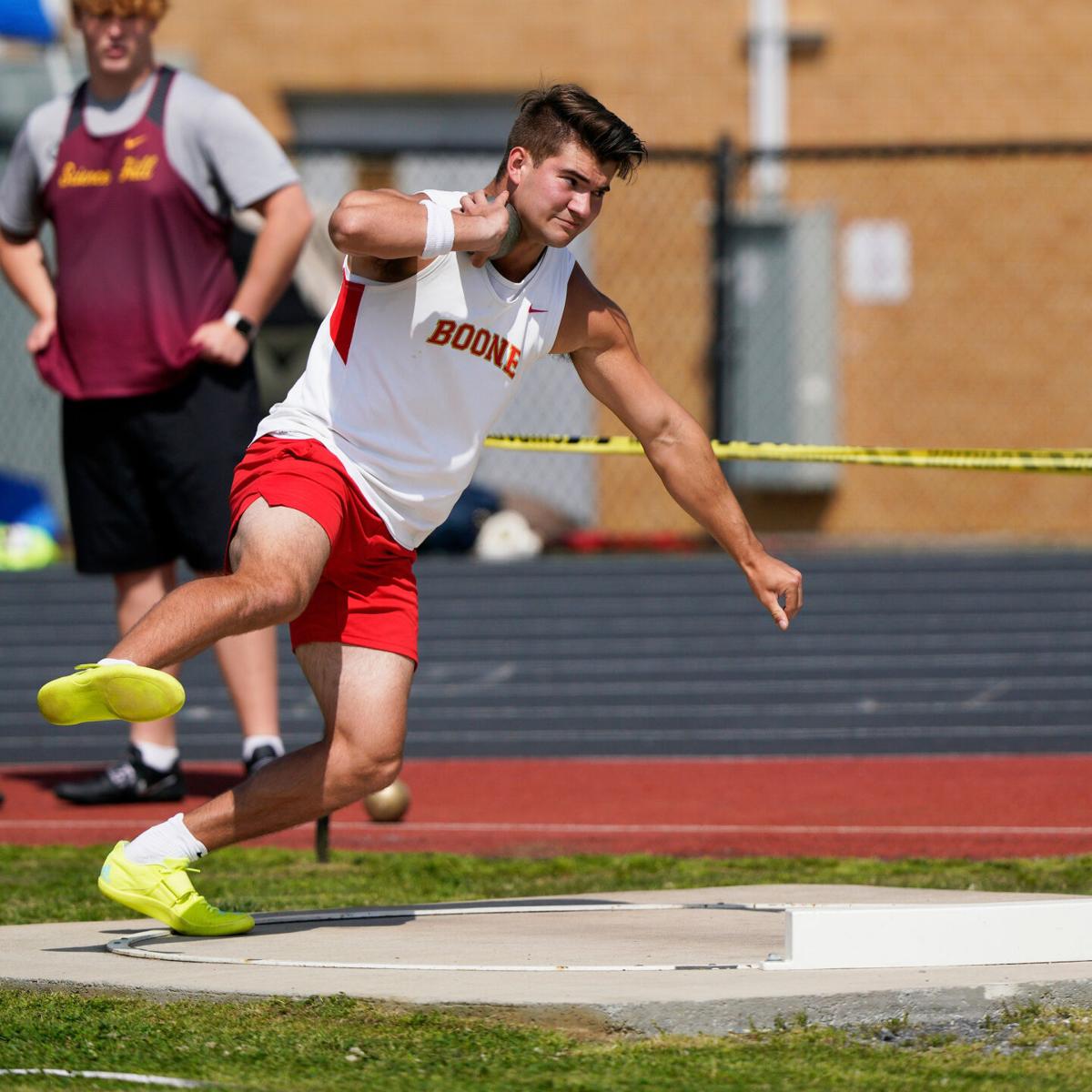 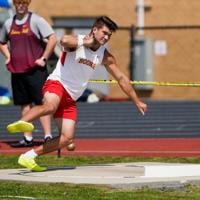 Daniel Boone’s Eli Penix, shown here at the 41st Watauga Orthopaedics/Times News Relays on May 8, 2021, unleashed a throw of 65 feet, 9 inches in the indoor shot put at the CYUP Cabin Fever Invitational in Louisville, Kentucky. It was a personal best and school record by more than 8 feet.

Daniel Boone’s Eli Penix gets ready to throw the shot put, an event he won on Saturday with a throw of 54-6.5.

Dobyns-Bennett throwing legend Hal Miller Jr. readies for a shot-put throw in the 1979 District I track meet in Kingsport.

Daniel Boone’s Eli Penix, shown here at the 41st Watauga Orthopaedics/Times News Relays on May 8, 2021, unleashed a throw of 65 feet, 9 inches in the indoor shot put at the CYUP Cabin Fever Invitational in Louisville, Kentucky. It was a personal best and school record by more than 8 feet.

Eli Penix’s meteoric rise to the top of the state and national throwing leaderboards is a tale that could be something out of Hollywood movie script.

The Daniel Boone senior has gone from virtually unknown two years ago — prior to the pandemic — to being a dual state champion. He is now on the cusp of being a household name.

“This shows what hard work can do,” Penix said. “I don’t have the craziest physical genetics, but the one genetic trait I have over most people is my desire to be better.

“I consistently wake up every day and I want to be 1% better than I was yesterday.”

Over the weekend, the Trailblazer strong man unleashed a throw of 65 feet, 9 inches in the indoor shot put at the CYUP Cabin Fever Invitational in Louisville, Kentucky. It was a personal best and school record by more than 8 feet.

Also, the throw was the best indoor mark since Bearden’s Joshua Sobota threw 67-5¾ in 2018.

“As crazy as this sounds, I wasn’t satisfied with the throw. It was great acceleration through the throw, and I had a good release,” Penix said. “I didn’t feel like I got the lift, and I didn’t think I threw it that far.”

The massive heave put Penix second on the national indoor leaderboard, just 3½ inches behind Michigan’s Zane Forist (66-0½). Penix remarked that second is the ideal spot that he wants to be in.

“It’s probably the most ideal position to be in right now,” Penix said. “I don’t know about anybody else, but I don’t want to have the easy path of being No. 1 in the nation. I know it’s great to be the rank that I am, but I wouldn’t want to be first right now.

“I want to have other competitors make me strive to get better. I don’t want to settle at all.”

Added longtime Boone coach Len Jeffers: “He’s surpassed everything I could’ve ever imagined. I shouldn’t be shocked, though, because he’s a very determined young man, and he’s constantly seeking improvement.”

Yes, the reward at the Louisville meet was great, but getting there and what occurred before the meet were somewhat of a blur for Penix.

“It was pretty much every bad condition you could have as a thrower as far as the drive and the lead-up,” Penix said. “We were supposed to start the competition at 5:30, but it started at 4, and we only got there at 3:30.”

In competition, all of his throws exceeded 60 feet and progressively got better, which is one of the hardest things to do when already unleashing some massive throws.

“The offseason definitely led into that,” Penix said. “I had a successful season last year, but I wouldn’t call it a great one. I did a lot of the little things that led to the big things.

“Once I hit the third throw at 64-2, it felt like I got hit by a truck. The adrenaline rush and just knowing that everything went into the offseason just happened, it was a crazy time.”

Added Boone throwing coach and father Chad Penix: “We left from here that morning and got up there on time as far as I was concerned. I ran out to the car and came back, and Eli said that we were up in three minutes. I think that because he didn’t have time to let the pressure get to him that he threw a little bit better.”

Penix already has his name in the history books in the rich annals of Northeast Tennessee track and field. He put his name on a short list of 60-plus foot shot-put throwers alongside Cherokee’s Evan McCracken and Dobyns-Bennett’s Hal Miller Jr.

When he won both the Large Class outdoor shot put and discus titles in the spring, it was the first time that instance had occurred since Tennessee High’s Ryan Baker did the double in 2003.

Not even McCracken — one of Northeast Tennessee’s best throwers in the last 20 years — could pull off the feat. And speaking of McCracken, Penix passed the former Chief on the all-time state indoor leaderboard for second over the weekend.

Former Tribe throwing legend Miller had a heave of 60-9 at the Tennessee Indoor state meet in Memphis in 1979 that was a state record at the time. Miller was third on the indoor list.

Chad says that Miller has kept up with Eli’s journey over the last couple of years and is one of his biggest fans. Neither Miller nor McCracken, however, could pull off what Penix has the opportunity to do in the spring if he remains healthy.

The last NET thrower to pull off the dual individual titles twice?

That distinction belongs to D-B’s Bobby Cifers, who pulled off the feat in non-consecutive years in 1937 and 1940. Cifers would end his illustrious track career with 10 individual titles, the most all-time in state history.

Penix doesn’t get too far ahead of himself, but his goals for the remainder of the indoor season are lofty. Both McCracken and Miller achieved throws surpassing 60 feet outdoors, so that will be a big check mark for Penix.

“It’s a dream come true, but it’s definitely not crazy to think about throwing 70 feet,” Penix said. “I’ve put in a lot of time and effort these last few years. It’s a lot easier to imagine those things when you put in the time to earn it.”

The outdoor goals are incredibly far out there, like most of his throws, but Penix is well on his way to accomplishing things that no other thrower in the vast history of state prep track has ever done.

For example, the state’s all-time best mark — including meets after state — in the shot put is Sobota’s throw of 69-1¾ at New Balance Outdoor Nationals from 2018.

The best throw in the discus with the same criteria was set by Skyler Coffey (Brentwood) with a heave of 201-0 in 2020.

Penix recently committed to Samford, which is quickly becoming one of the top throwing destinations in the entire country.

“Tom Puskas moved there recently, and he’s a great throwing coach and a character,” Penix said. “I really looked for a coach that was going to push me and bring a great plan. Rod Tiffin is a great head coach as well, and I think that the academics at Samford are outstanding.