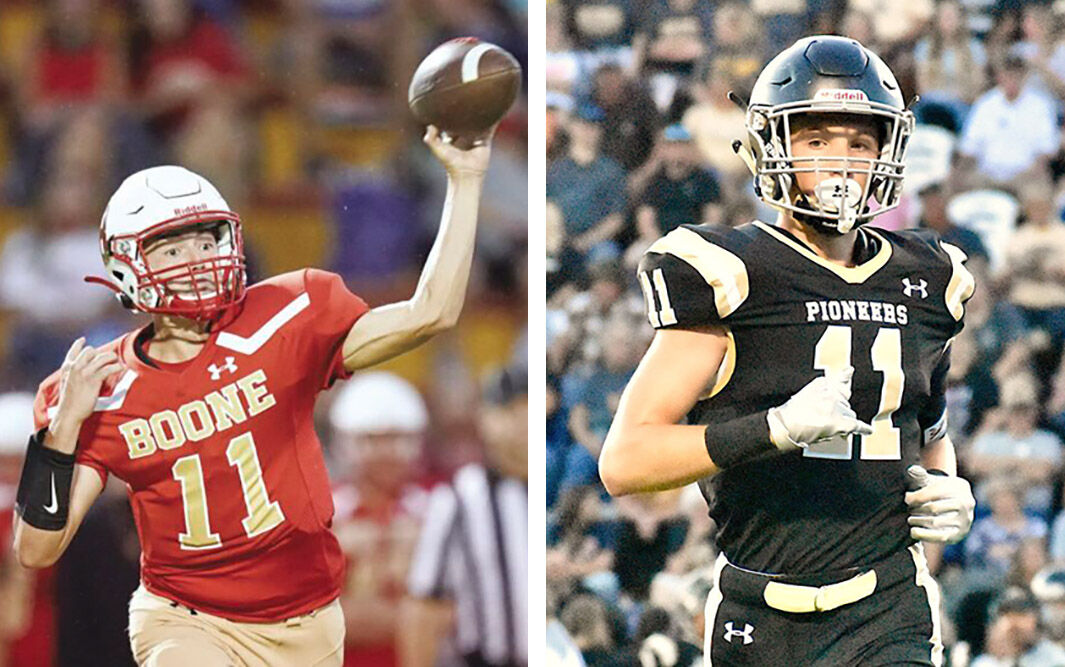 Quarterbacks Jackson Jenkins of Daniel Boone, left, and Mason Britton of David Crockett will lead their teams into the 50th annual Musket Bowl on Friday night in Jonesborough. Boone leads the series 36-13. 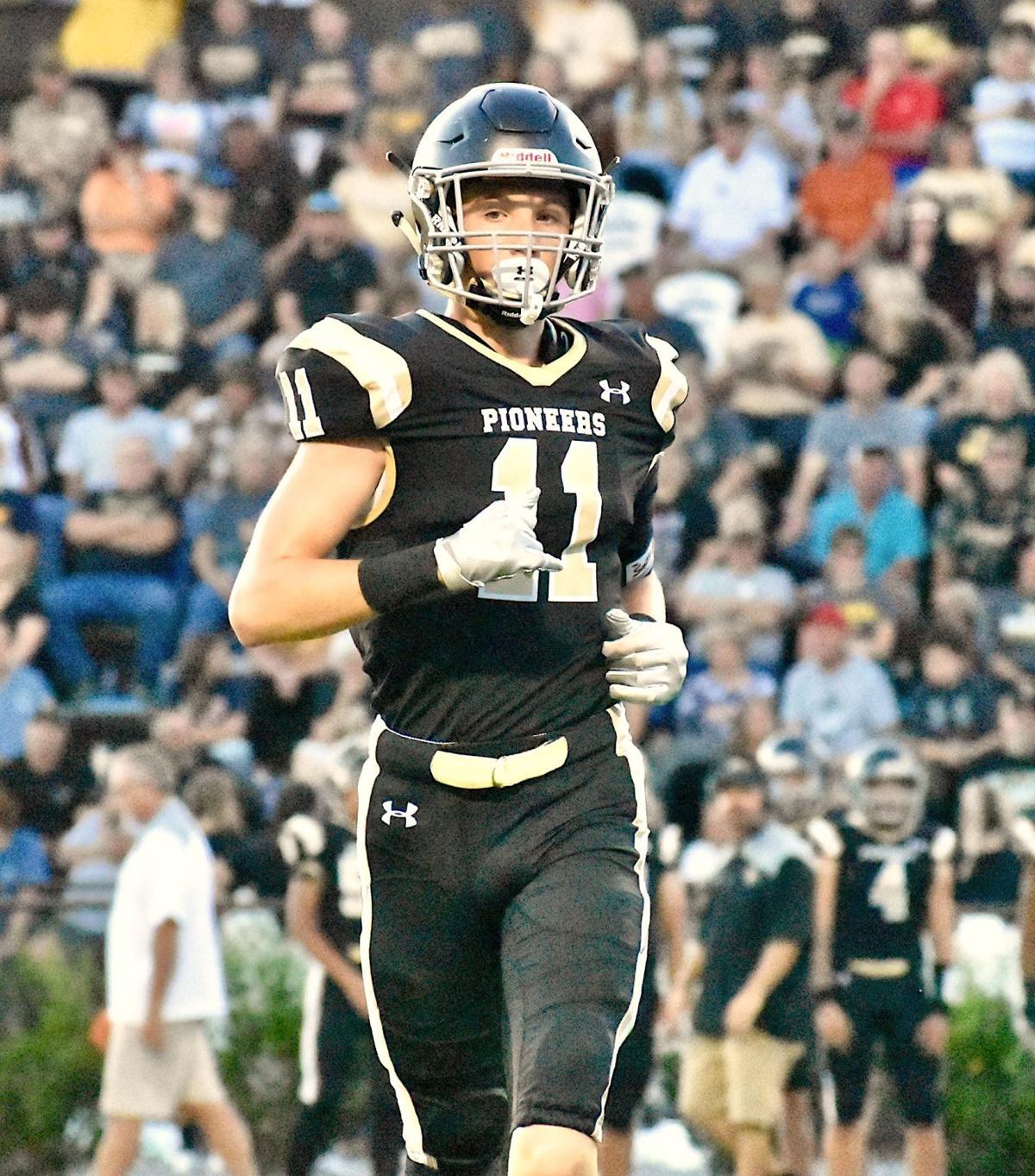 Mason Britton trots onto the field prior to the Science Hill game. 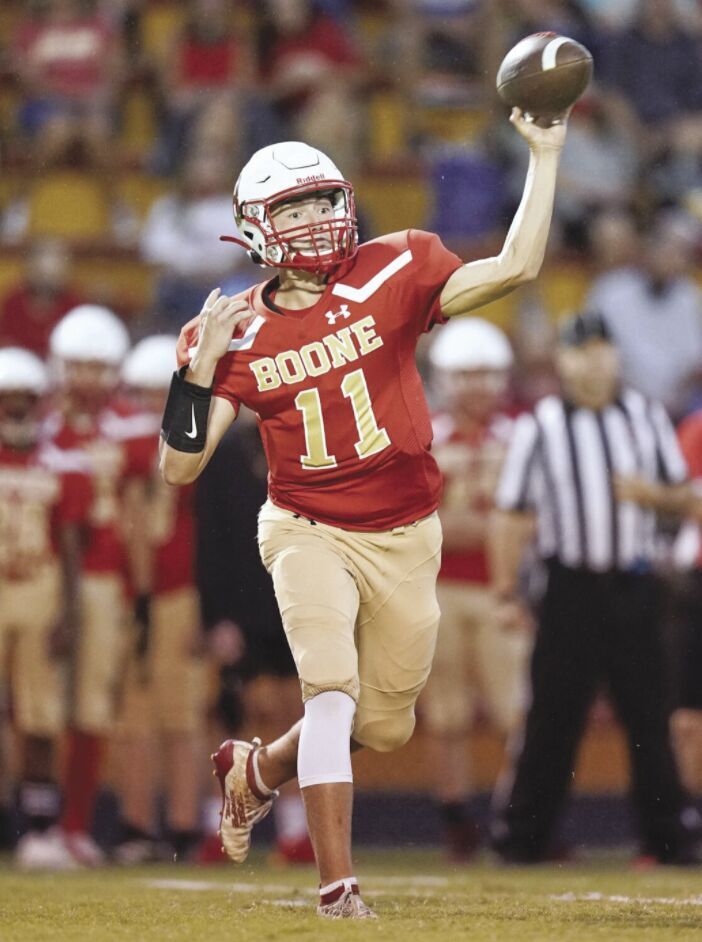 Daniel Boone quarterback Jackson Jenkins has been efficient throwing the football this season.

Quarterbacks Jackson Jenkins of Daniel Boone, left, and Mason Britton of David Crockett will lead their teams into the 50th annual Musket Bowl on Friday night in Jonesborough. Boone leads the series 36-13.

Mason Britton trots onto the field prior to the Science Hill game.

Daniel Boone quarterback Jackson Jenkins has been efficient throwing the football this season.

Neither Daniel Boone nor David Crockett was caught looking ahead to the 50th annual Musket Bowl.

Yardage-wise, the Trailblazers (4-3) dominated Cocke County 327-33 and had a 20-4 advantage in first downs. The ’Blazers were particularly dominant on the ground, piling up 273 rushing yards while holding the Fighting Cocks to minus-5 yards, and the Boone defense came up with five turnovers.

Brennan Blair had 17 carries for 131 yards and two touchdowns and Brayden Blankenship added 55 yards and a TD for the ’Blazers.

Hagen Edwards, a sophomore more known for his play at linebacker, also rushed for two scores.

Boone, which used a two-quarterback system last season, has turned the controls over to Jackson Jenkins. The son of coach Jeremy Jenkins was efficient, completing 4 of 5 passes for 54 yards and a 24-yard touchdown to Daniel Matherly.

Boone has shown throughout the season it’s adept at throwing the ball. Case in point: Boone’s 35-34 win over Greeneville earlier this season in which Jenkins went 12-for-14 for 153 yards and hit Phillip Page for three TD passes.

Their thrilling victory over Tennessee High put the Pioneers (6-2, 3-0) in position to win the Region 1-5A championship outright. They would hold the tiebreaker over both the Vikings and Boone with a Musket Bowl victory.

Edison Gouge kick-started a larger build-up to the Musket Bowl with his 38-yard field goal with 20 seconds left that lifted Crockett over Tennessee High.

The kick followed a 35-yard catch by Prince Kollie and capped a back-and-forth battle that saw Crockett race out to a 21-0 lead only to see the Vikings storm back and move out front with 1:32 left to play.

Kollie, who is committed to Notre Dame, got the best of Tennessee High’s Jaden Keller in a showcase of individual stars. Kollie had 18 carries for 132 yards, including a 79-yard run to give Crockett its first lead, and hauled down three catches for 104 yards, among them a screen pass from Mason Britton that he turned into a 60-yard touchdown play.

Crockett isn’t one-dimensional by any means. Brayden Reid scored two touchdowns in a surprisingly easy 31-7 win over Webb during which Britton was 10-of-15 passing. The Pioneers also have a dominant lineman in 6-foot-5, 300-pound Tony Davis.

The rivals have been remarkably similar this season, easily winning when heavily favored and competitive in losses. In that regard, it was no surprise both took care of business heading into their historic meeting.

Crockett won the first game in the rivalry 74-0, getting eight touchdowns from Sandy Johnson.

Boone reeled off 12 straight wins from 2003-14, but the rivalry has been competitive in recent seasons. The ’Blazers have won three of the past five meetings.