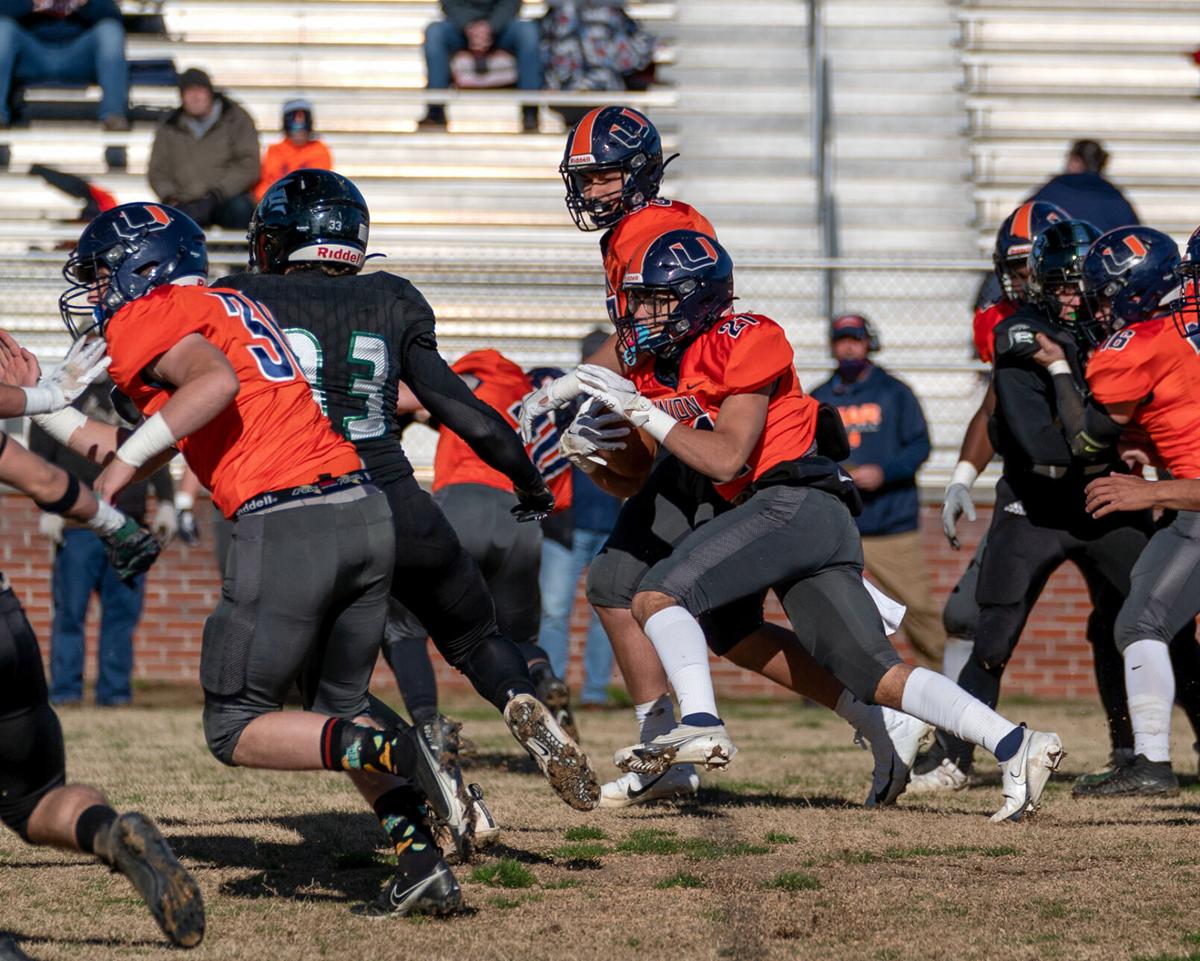 Union's Malachi Jenkins (21) takes off behind his blockers during Friday's nondistrict game with Eastside in Coeburn. 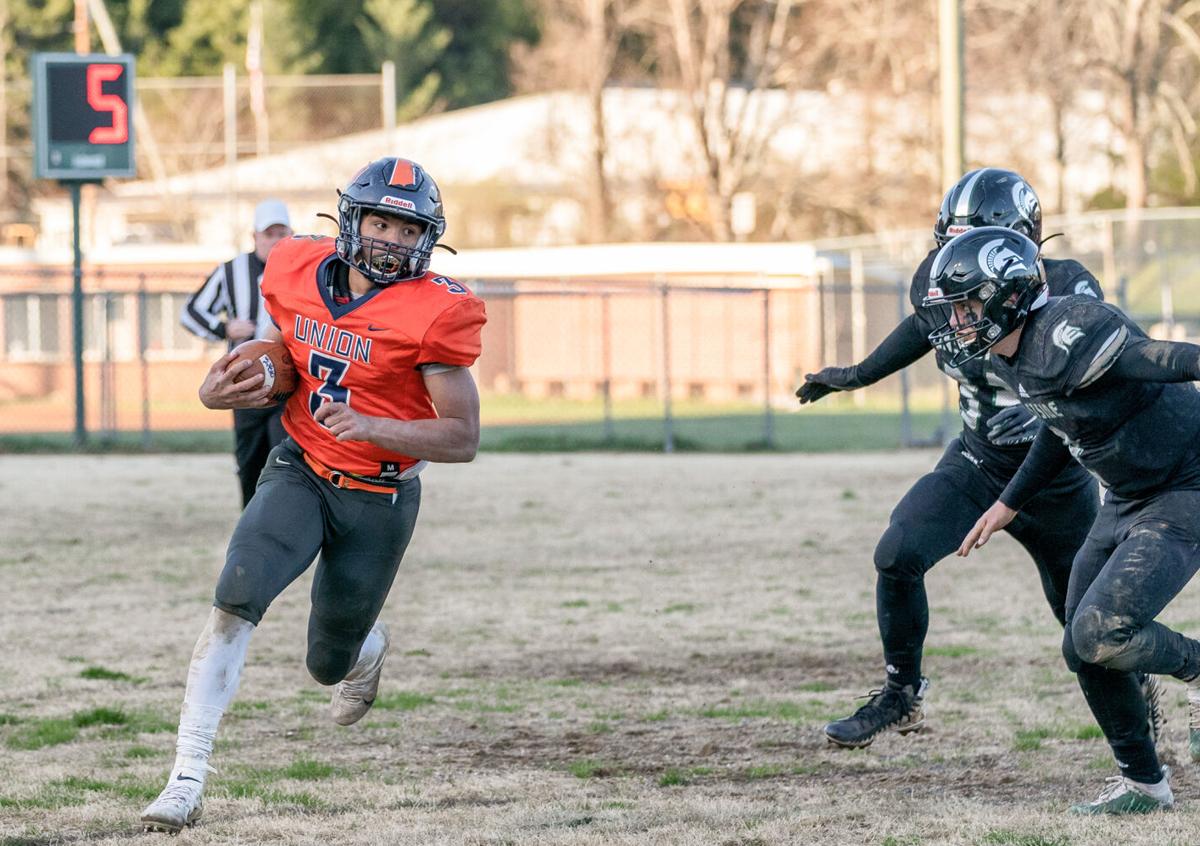 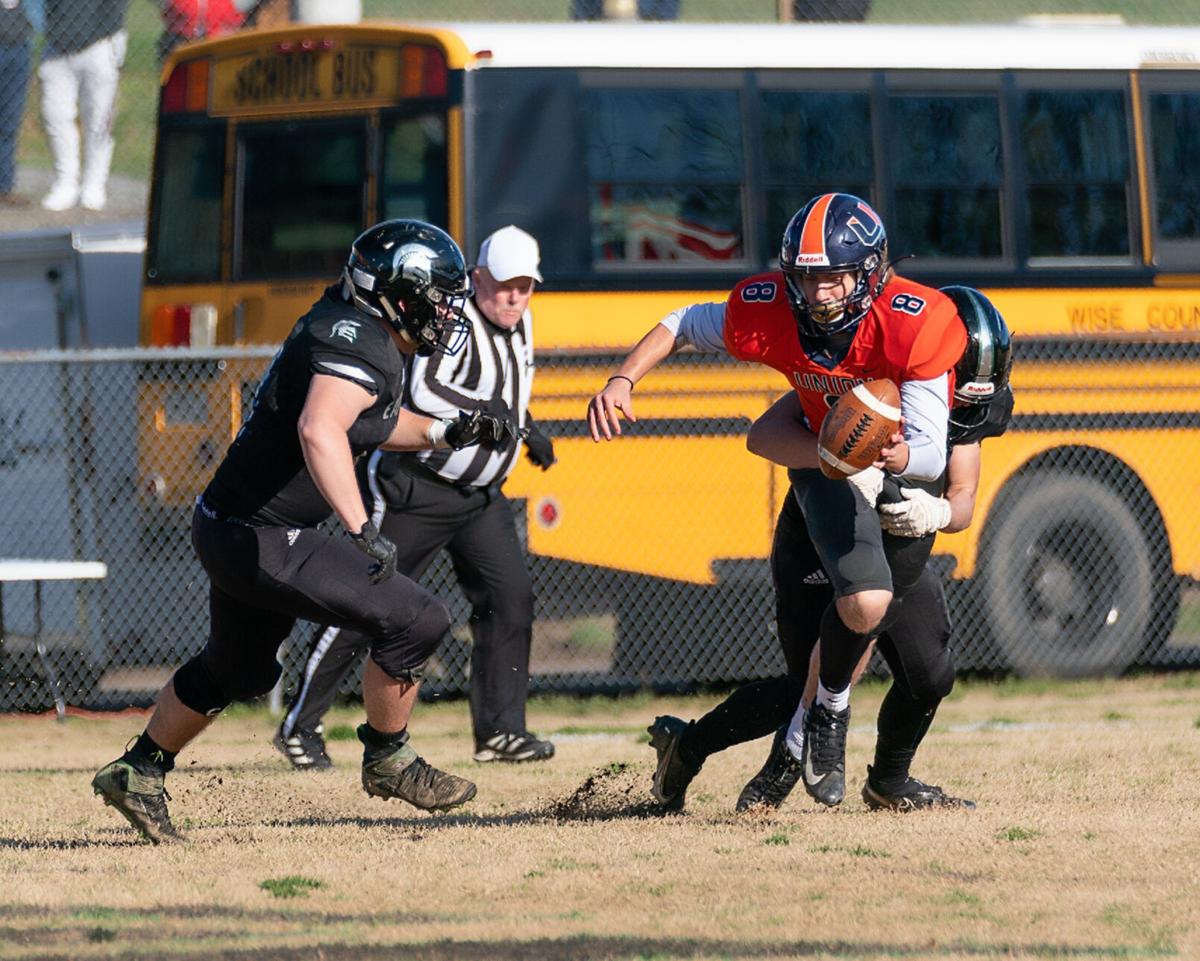 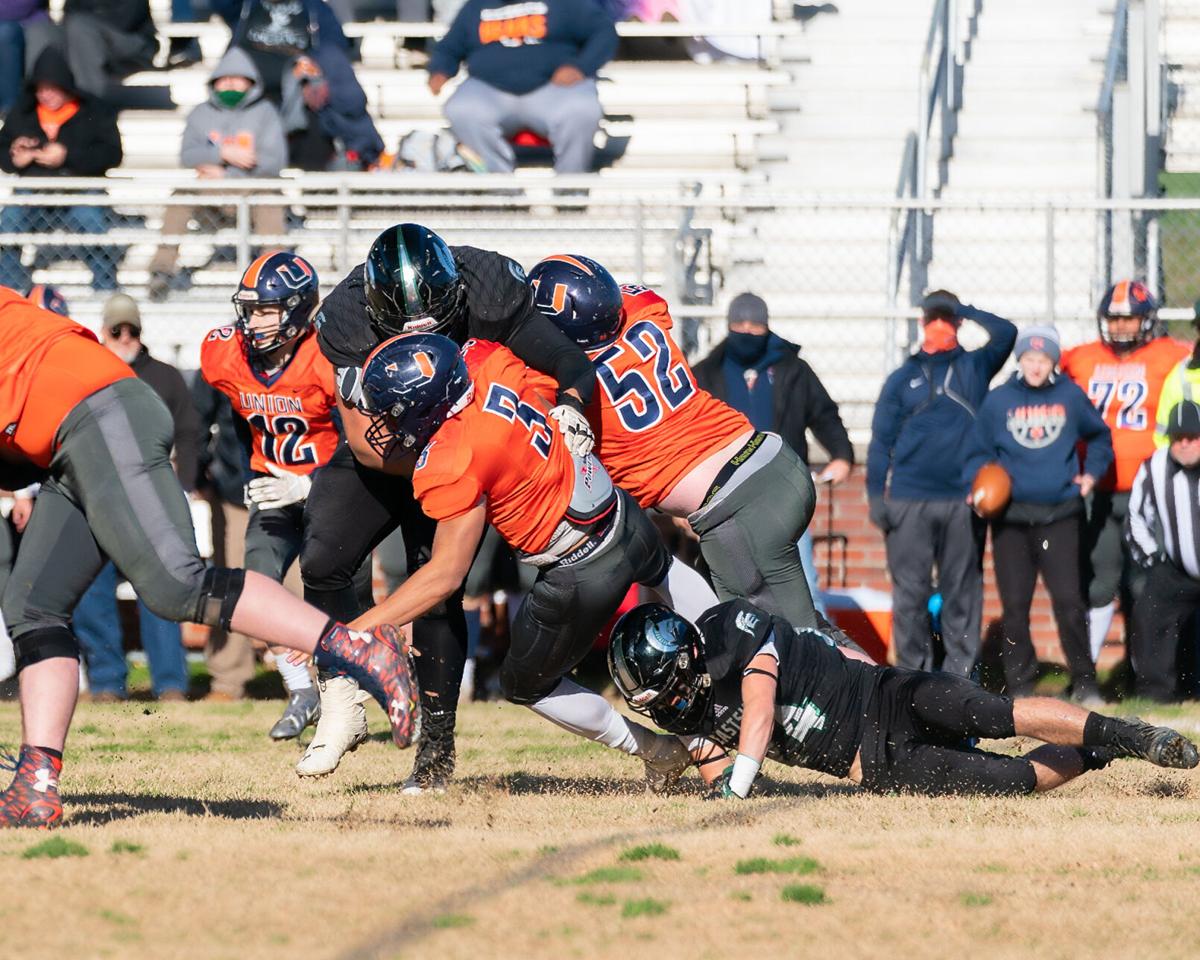 The Eastside defense takes Union's Zavier Lomax (3) to the ground on Friday in Coeburn. 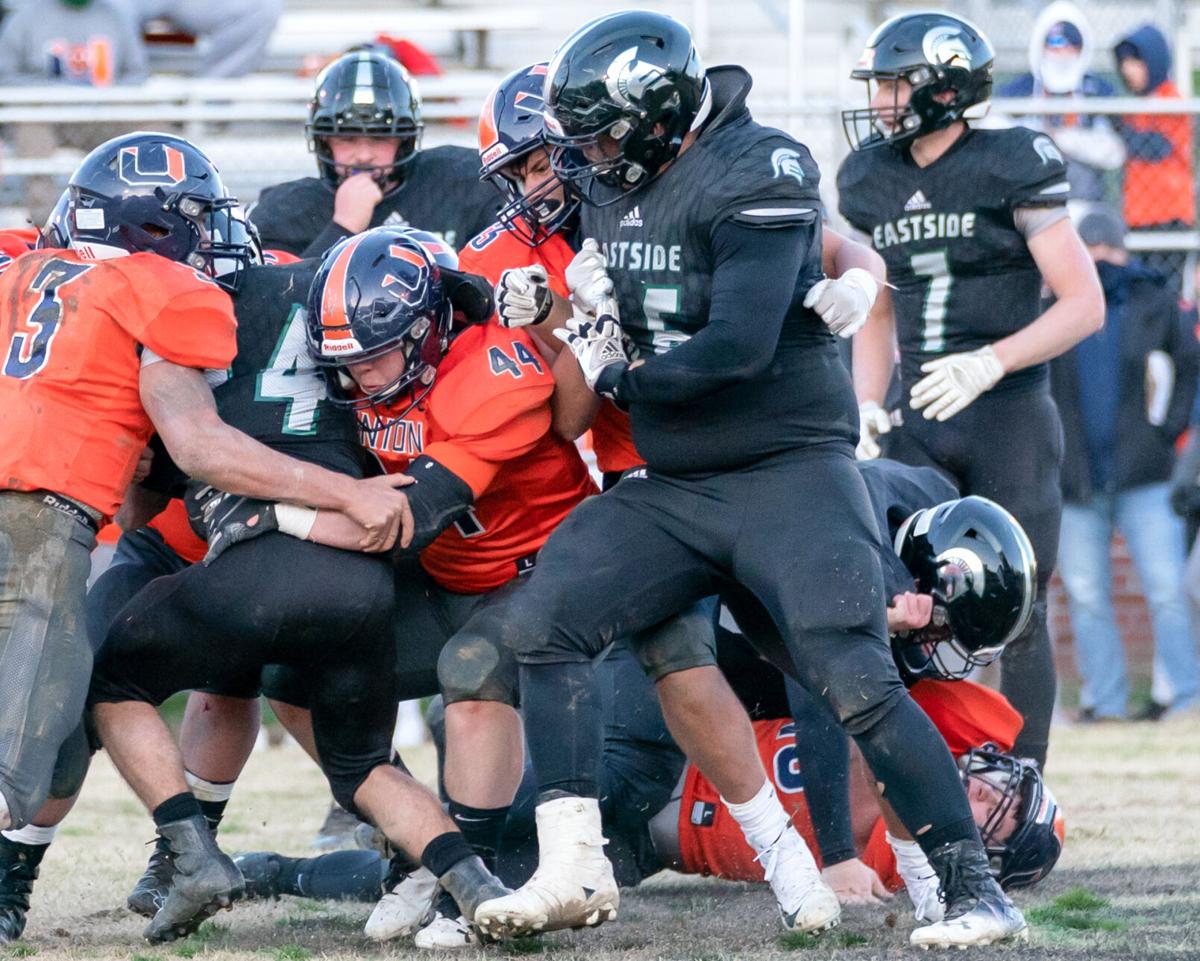 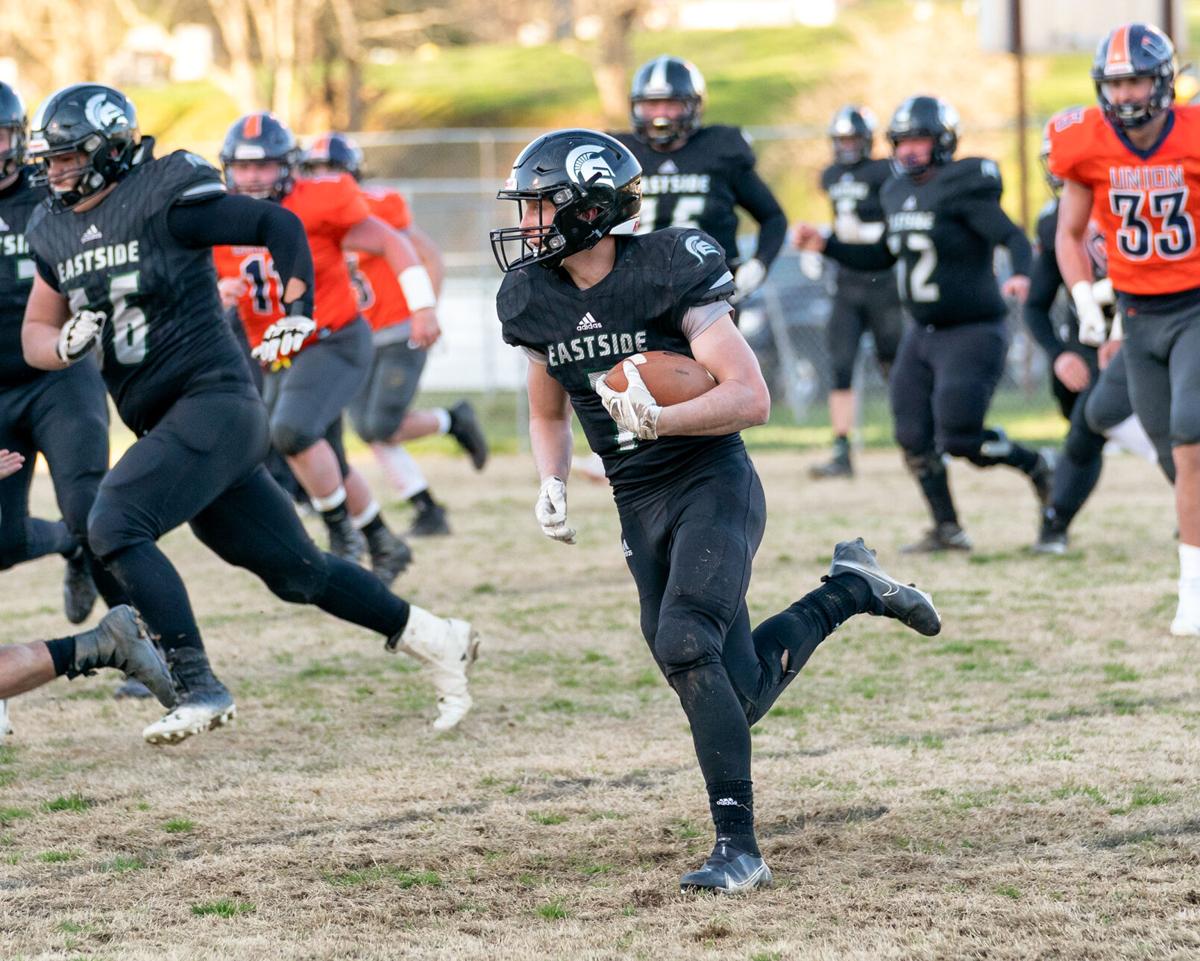 Union's Malachi Jenkins (21) takes off behind his blockers during Friday's nondistrict game with Eastside in Coeburn.

The Eastside defense takes Union's Zavier Lomax (3) to the ground on Friday in Coeburn.

COEBURN — Union tuned up for next weekend’s Region 2D football playoffs with a 35-13 win over Eastside on Friday at Carl McConnell Stadium.

The game was a late-season replacement for both teams. Union was scheduled to play Ridgeview and Eastside was slated to meet J.I. Burton, but those games were canceled after their opponents had to begin COVID-19 protocols.

“We’re just glad to get this game in and just have a chance to play,” Union coach Travis Turner said. “We didn’t want to be a game short, especially for our seven seniors we’ve got. It was just a chance to get on the field and play again.”

Turner’s squad will have another chance to play before the spring season ends. The Bears travel to Bluefield on April 10 to face Graham in the Region 2D semifinals.

Honeycutt, a sophomore, led the ground game with 193 yards and two touchdowns on 11 carries.

“The line blocked great,” Honeycutt said. “It was just a bunch of good blocking and I couldn’t do it without it.

“Zavier blocked great for me. It was just great. He just opened it up and I was able to get a couple of touchdowns and some big yards.”

Lomax racked up 57 rushing yards and a touchdown, Jenkins had 52 yards and a score, and Satterfield finished with 51 yards and a TD on just three carries.

Union’s first score came halfway through the first quarter after an errant snap went over the head of Eastside punter Chase Carico and the Bears recovered the ball at Eastside’s 15-yard line.

Honeycutt found the end zone on the next play, and Koby Crist added the PAT to put Union up 7-0.

The Bears moved ahead 14-0 with 1:40 left in the first when Lomax broke loose for a 41-yard touchdown run.

Eastside cut Union’s lead to 14-6 after a time-consuming drive to open the third quarter. Quarterback Will Stansberry capped the drive with a 3-yard touchdown pass to Jordan Gray with 6:41 left in the third.

Union, however, wasted no time answering the Spartans’ score. On the first play from scrimmage on the subsequent drive, Honeycutt found an opening through the middle of the defense and ran 48 yards for a touchdown.

“When we kept them from driving the football, we did OK. But when they hit a few big ones on us, that sort of turned the momentum,” Eastside coach Mike Rhodes said. “But you know, I’ll take my kids every day of the week. They played their hind ends off. I’ve got a special group of kids.”

Eastside’s Bryson Shepherd closed the night’s scoring with a 42-yard touchdown run with 5:10 showing on the clock. Shepherd finished with 120 yards and the TD on 13 carries.