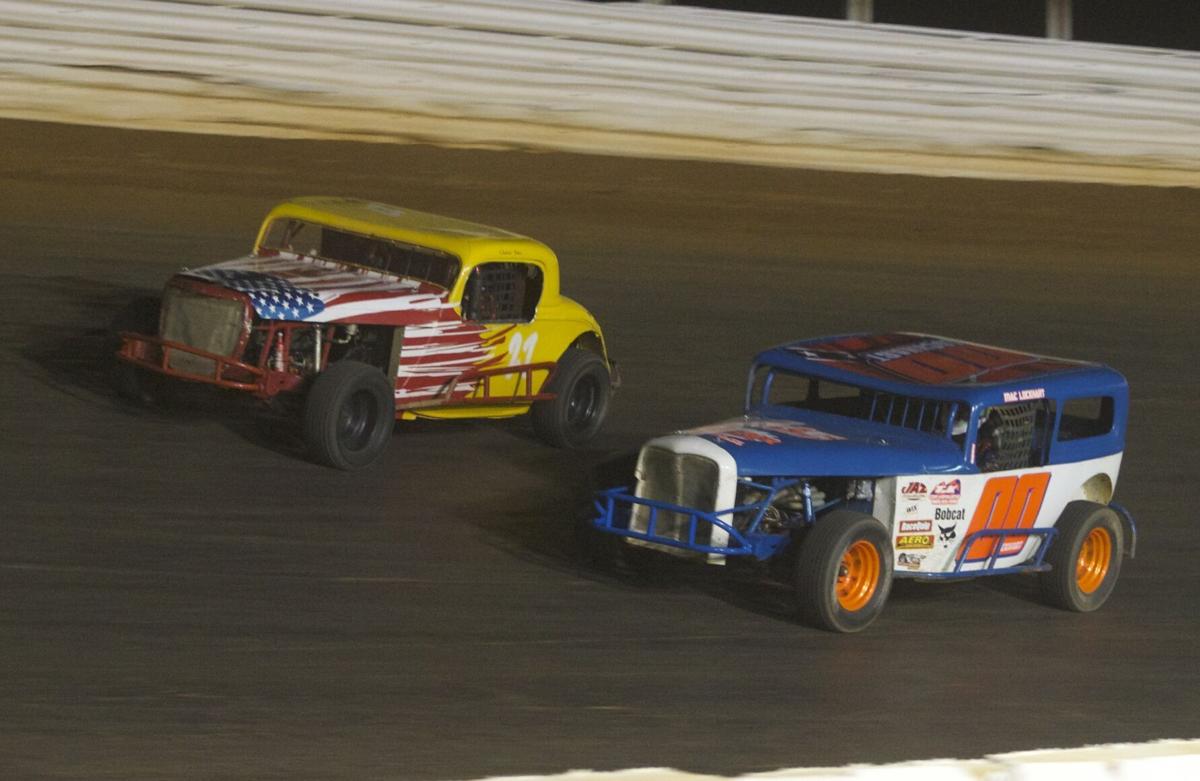 Charles Bates (27) and Mac Lockhart (00) race off turn 4 on the final lap of Saturday’s Classic feature at Volunteer Speedway. 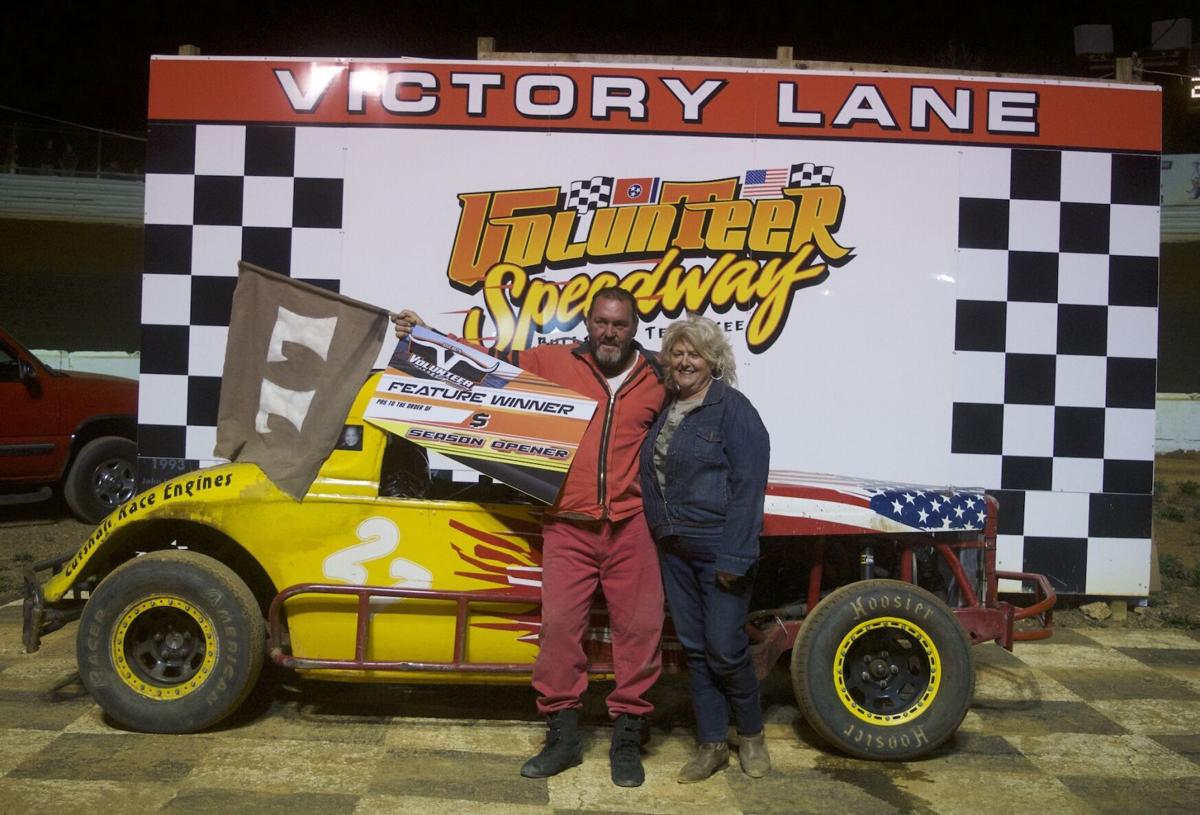 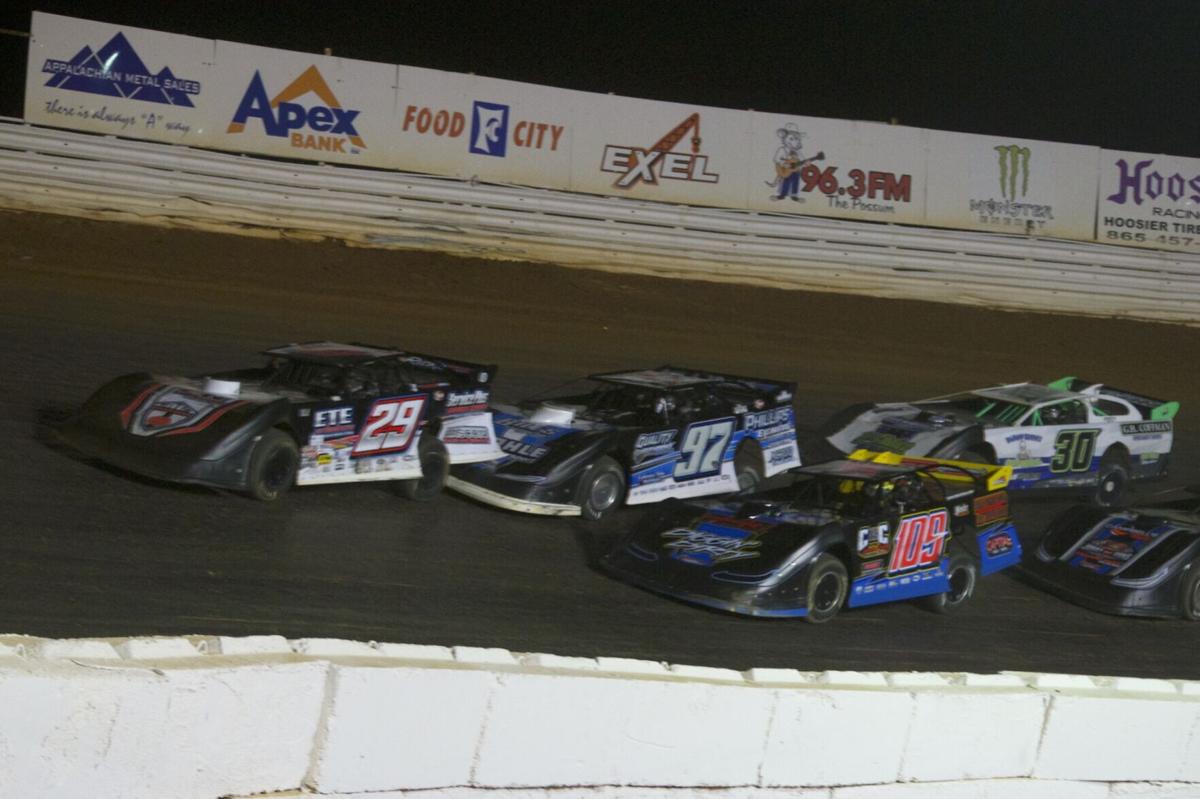 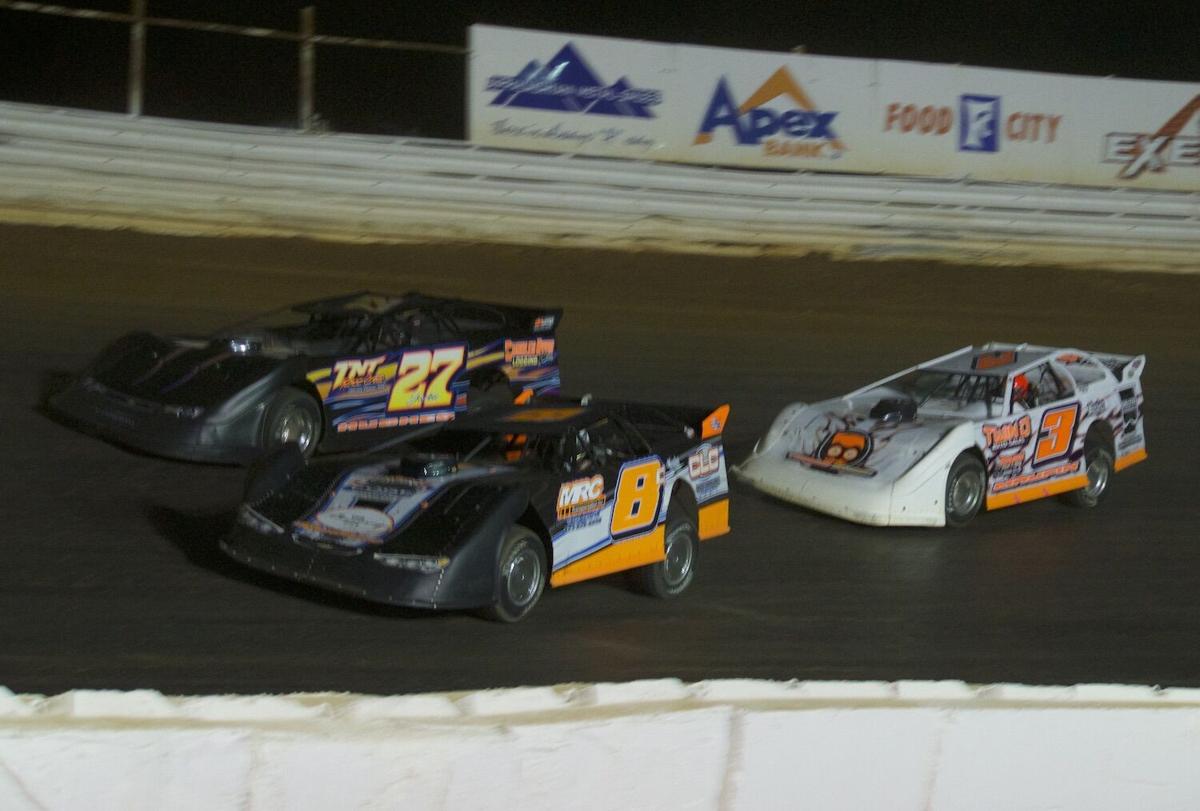 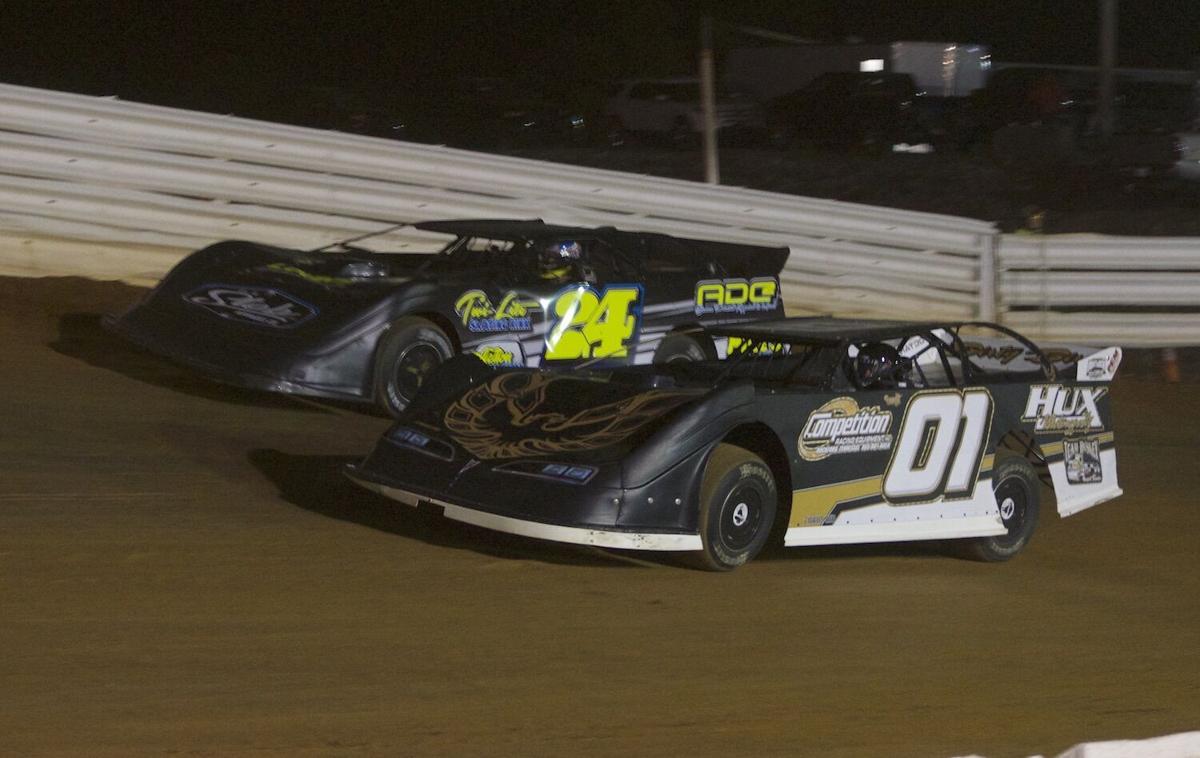 Wayne Rader (01) goes to the inside of Mason Bare (24) during Saturday's Sportsman Late Model feature at Volunteer Speedway. 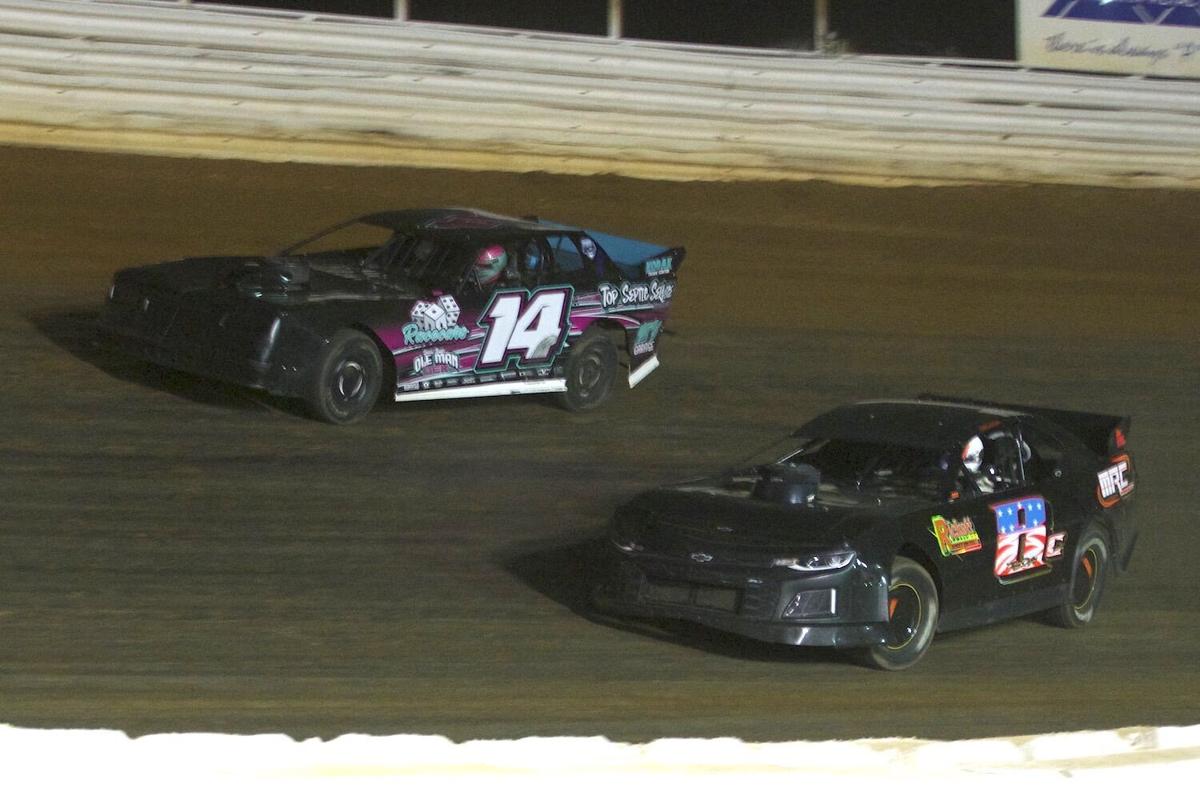 Austin Atkins (14) and Rex Coffey (8) race for the lead coming to the finish of Saturday's Street Stock feature at Volunteer Speedway. 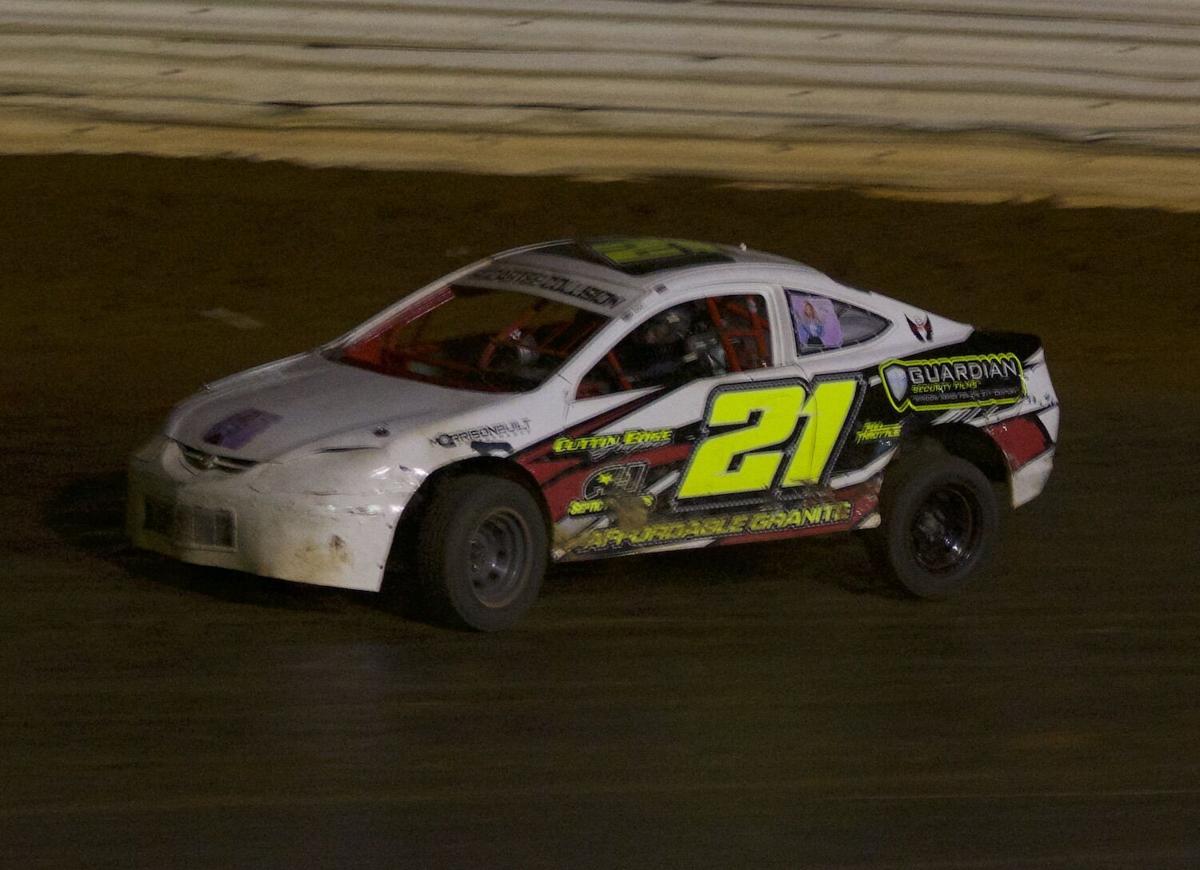 Charles Bates (27) and Mac Lockhart (00) race off turn 4 on the final lap of Saturday’s Classic feature at Volunteer Speedway.

Wayne Rader (01) goes to the inside of Mason Bare (24) during Saturday's Sportsman Late Model feature at Volunteer Speedway.

Austin Atkins (14) and Rex Coffey (8) race for the lead coming to the finish of Saturday's Street Stock feature at Volunteer Speedway.

BULLS GAP — The Classic division produced a classic finish to kick off the 48th season of racing at Volunteer Speedway on Saturday.

Charles Bates edged Mac Lockhart in a finish so close that both drivers headed to victory lane thinking they had won. In the end, Bates’ yellow No. 27 car edged Lockhart’s white and blue No. 00 by mere inches, giving the Johnson City driver his second win on the 4/10-mile dirt track.

Bates led throughout the 20-lap race, holding off challenges from Lockhart and others.

The win was emotional for Bates, who unfurled a flag in victory lane in memory of his late nephew.

“I’ve had that flag with me a long time and said I was going to hang it out for him the next time I won a race,” Bates said. “It was so close. I thought I won, he thought he did. We had to wait on the official word. It means a lot to win. I’ve been chasing these guys forever, and it’s finally good to catch them.”

Bates credited fellow racer Bobby Mays for advice on the set-up on the car that proved to be a winning combination.

Lockhart, who spun in a battle with Shaun Sise, recovered and passed Jimmy Rayhuff for second place with three laps to go. He closed to the back bumper of Bates on the final lap, diving to the inside and briefly pulling ahead as the cars exited turn four. Bates powered off the corner and won the photo finish at the end.

“I knew it was close,” said Lockhart, a Luttrell driver. “I didn’t know if he got me. The tech guy told me to come over (to victory lane), but it’s alright. I’m just happy to be racing like that.”

Rusty Ballenger from Seymour led flag-to-flag in the 25-lap Crate Late Model feature, pulling away from Eli Beets at the end. Ballenger’s black No. 29 car was handling like a dream, able to go anywhere he wanted on the track.

Ballenger explained how being in the lead was a huge advantage.

“This track is aero-dependent and it felt good to be out front,” Ballenger said. “I don’t know if I had the fastest car, but we got it figured out. I kept running the middle in turns 1-2, making sure if I didn’t get a good run off turn 4, they couldn’t slide me. The car was just so maneuverable, a good car all night.”

Beets, a Knoxville driver, battled past Aaron Guinn for the runner-up spot. However, Guinn was disqualified in post-race inspection as Teddy Tate, Gary Crittenden and Ross White filled out the rest of the top five.

Mason Bare raced to the runner-up spot with Brad Seagle, Warren McMahan and Addison Cardwell rounding out the top five.

The Street Stock race mirrored the Classic finish with Morristown driver Austin Atkins and Rex Coffey battling to the checkered flag. Same as in the Classic race, Atkins kept his foot on the throttle coming off the high side of turn 4 to edge Coffey at the finish line.