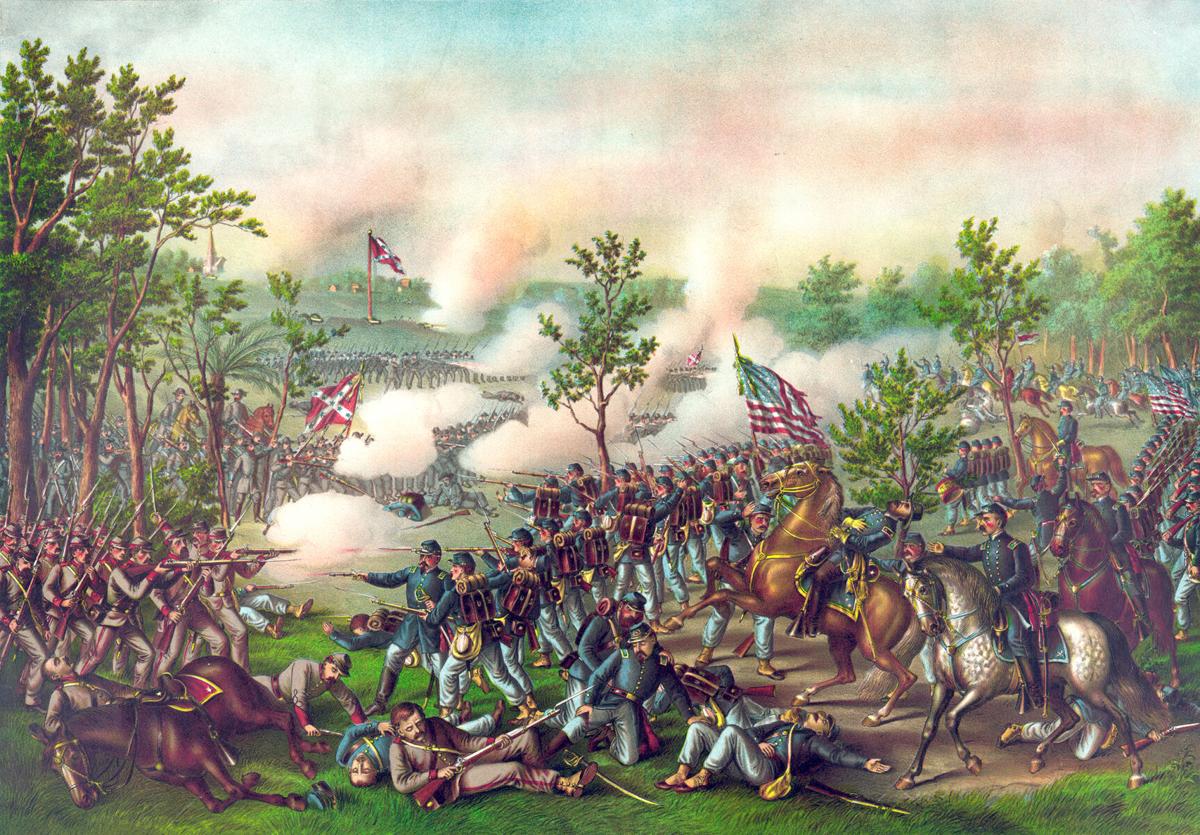 Show here is a lithograph by Kurz & Allison depicting the Battle of July 22, 1864, in Atlanta and the death of Gen. James B. McPherson Army of the Tennessee engaged. 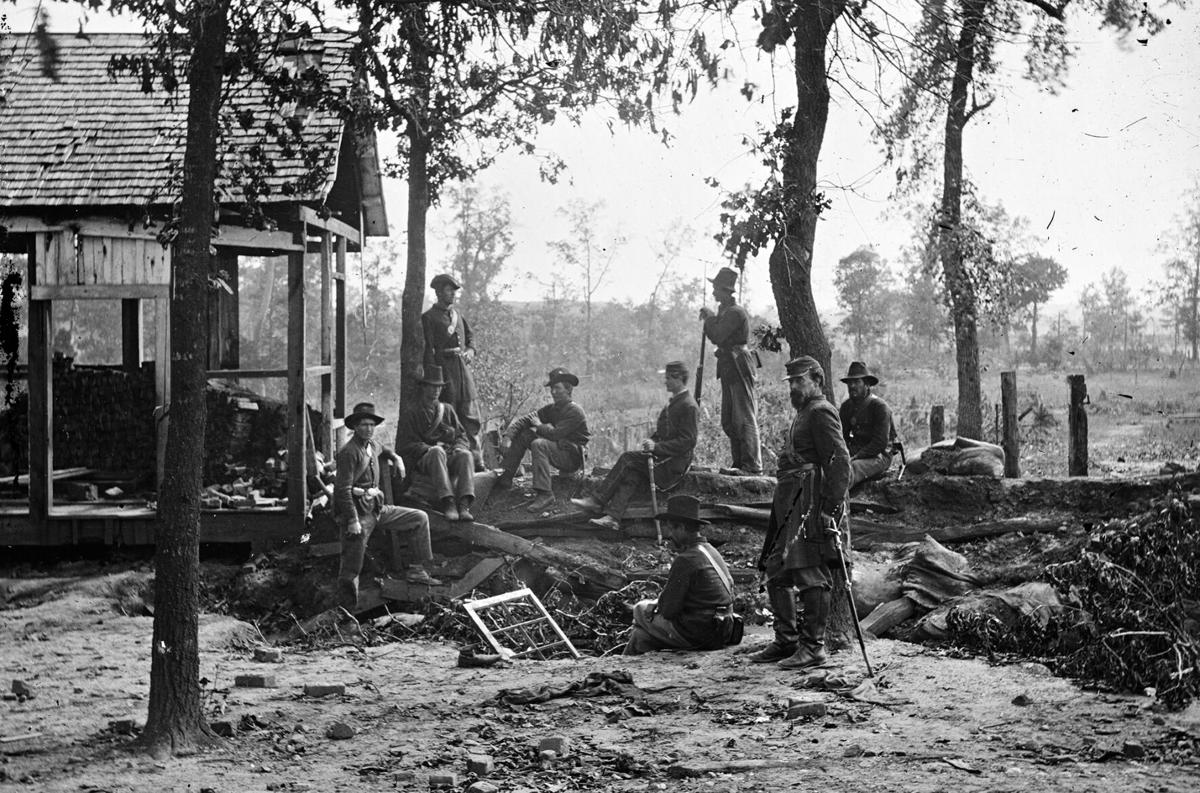 This Federal picket post outside of Atlanta was photographed shortly before the battle of July 22.

Show here is a lithograph by Kurz & Allison depicting the Battle of July 22, 1864, in Atlanta and the death of Gen. James B. McPherson Army of the Tennessee engaged.

This Federal picket post outside of Atlanta was photographed shortly before the battle of July 22.

Undaunted by his setback against Union Gen. William T. Sherman’s forces at the Battle of Peachtree Creek, Gen. John Bell Hood planned a new attack. He would out-flank the flankers and attack the forces of Gen. James B. McPherson, who had forced him to fall back and protect Atlanta.

“A.P. Stewart’s and Benjamin Cheatham’s corps are to take position and construct works to defend the city,” wrote Hood. “Gen. William J. Hardee is ordered to move with his corps, during the night, south on the McDonough Road, crossing Intrenchment Creek at Cobb’s Mill, and to completely turn the left of McPherson’s army.”

On July 21, just as Col. Francis Walker, commander of the 19th Tennessee and temporary commander of Maney’s Brigade, was getting the brigade ready for the march Hood ordered, he received his commission as a brigadier general effective on July 22.

There was no time for celebration as the men marched through the night around the far left of the Federal line. Arriving undetected at Cobb’s Mill, Hardee formed for battle behind the Union lines and attacked at noon on the 22nd.

While the 19th Tennessee was moving toward its point of attack, they ran into Gen. McPherson himself, along with a scouting party. McPherson was shot when he attempted to escape and died.

Walker’s brigade continued on after the run-in with McPherson and began taking heavy fire as it advanced uphill toward the entrenched Yankees. A brigade of Georgians next to Walker’s brigade took cover and refused to advance any farther. The Hawkins Boys pressed forward into the hail of bullets.

Regimental Musician William Worsham remembered one of the Hawkins Boys’ heroic act at this critical moment in the battle. “Here John Mason, our color bearer, displayed remarkable courage,” said Worsham. “He ran forward several steps ahead of the regiment and planted the colors on the enemy’s works.”

The rest charged behind him and captured the Federal works, but at a cost, as Lt. Col. Carrick W. Heiskell, from Rogersville and the former captain of the Hawkins Boys, remembered.

“Here in the forefront of the battle, of necessity in the midst of his men afoot,” said Heiskell. “While his good sword swept in glittering circles over his head and his voice rang out in words of encouragement and command above the peal of rifles almost muzzle to muzzle, the beloved and chivalrous Walker, pierced by a fatal ball, sunk upon one knee with his head resting upon the other as if in prayer. Thus died a Christian gentleman.”

Walker never had the chance to sew his general’s stars on his collar.

The Federal forces fell back to another hill and the Confederates followed.

The Rebels again charged and took the cannons, but not for long. Gen. Sherman had replaced Gen. McPherson with Gen. John “Black Jack” Logan, who had rallied McPherson’s troops and, joined by an entire corps of reinforcements sent by Sherman, counter-attacked yelling, “McPherson and revenge boys, McPherson and revenge.”

The counter-attack pushed the Rebels back to their starting point and threatened to overrun the Confederate field hospital where the 19th Tennessee’s regimental surgeon, Dr. Joseph Dulany from Blountville, was working.

“Our field hospital was back on the ridge, near Cobb’s Mill, a short distance in the rear of the battlefield” said Worsham. “When Hardee returned to the city and to his position around the works, a detail was made to remain in the hospital with the wounded, of whom were more Federals than Confederates. I was one of the detail to remain in the field hospital and, of course to be made a prisoner, as the Federals were all around us. There were a few of our regiment left, wounded so badly they could not be taken away. While we did not like the idea of being prisoner, duty to our boys, and obedience to orders, we remained willingly.”

While Worsham and the other members of the 19th Tennessee who stayed behind tended the wounded and buried the dead, he reflected on the death of Walker.

“Col. Walker was a brave and noble man,” said Worsham. “We never saw him do anything unbecoming a Christian, nor did we ever hear him utter a word that could not have been spoken in the presence of ladies. We were with him all the time on the march, and in camp our tent was pitched near his.”

After five days, with work in the hospital done, the detail from the 19th Tennessee slipped out under the cover of darkness and made it back to Atlanta.