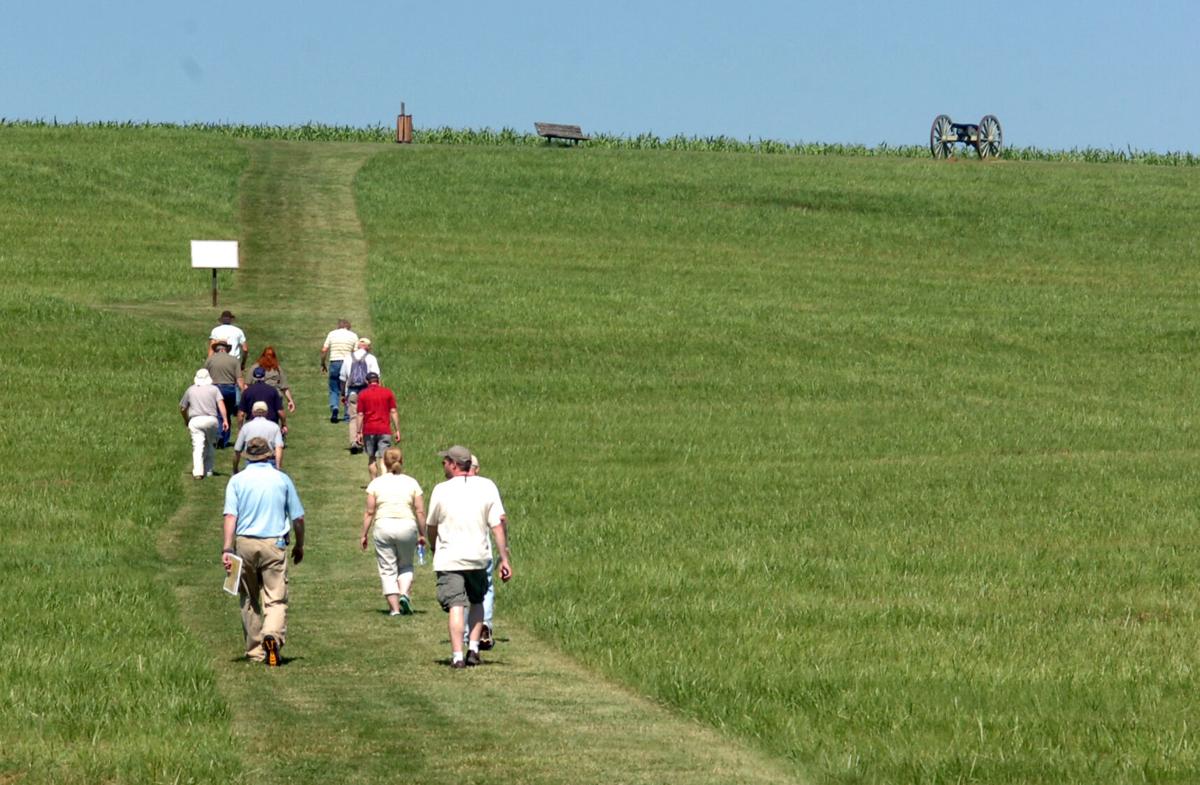 Members of the American Battlefield Trust make their way onto the Spring Hill Battlefield, heading toward the Federal lines. 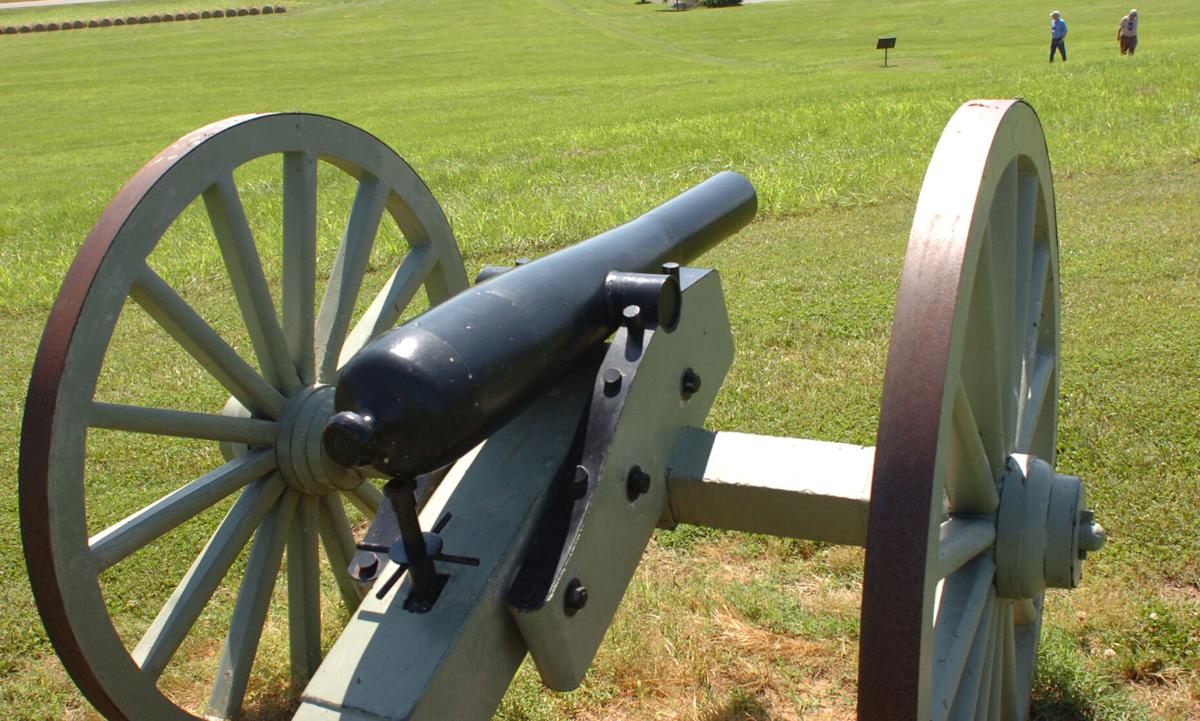 Two members of an American Battlefield Trust (formerly Civil War Trust) tour group, seen in the upper right-hand corner, appear to be in range of a Federal cannon guarding the top of Spring Hill Battlefield as they explore the site. 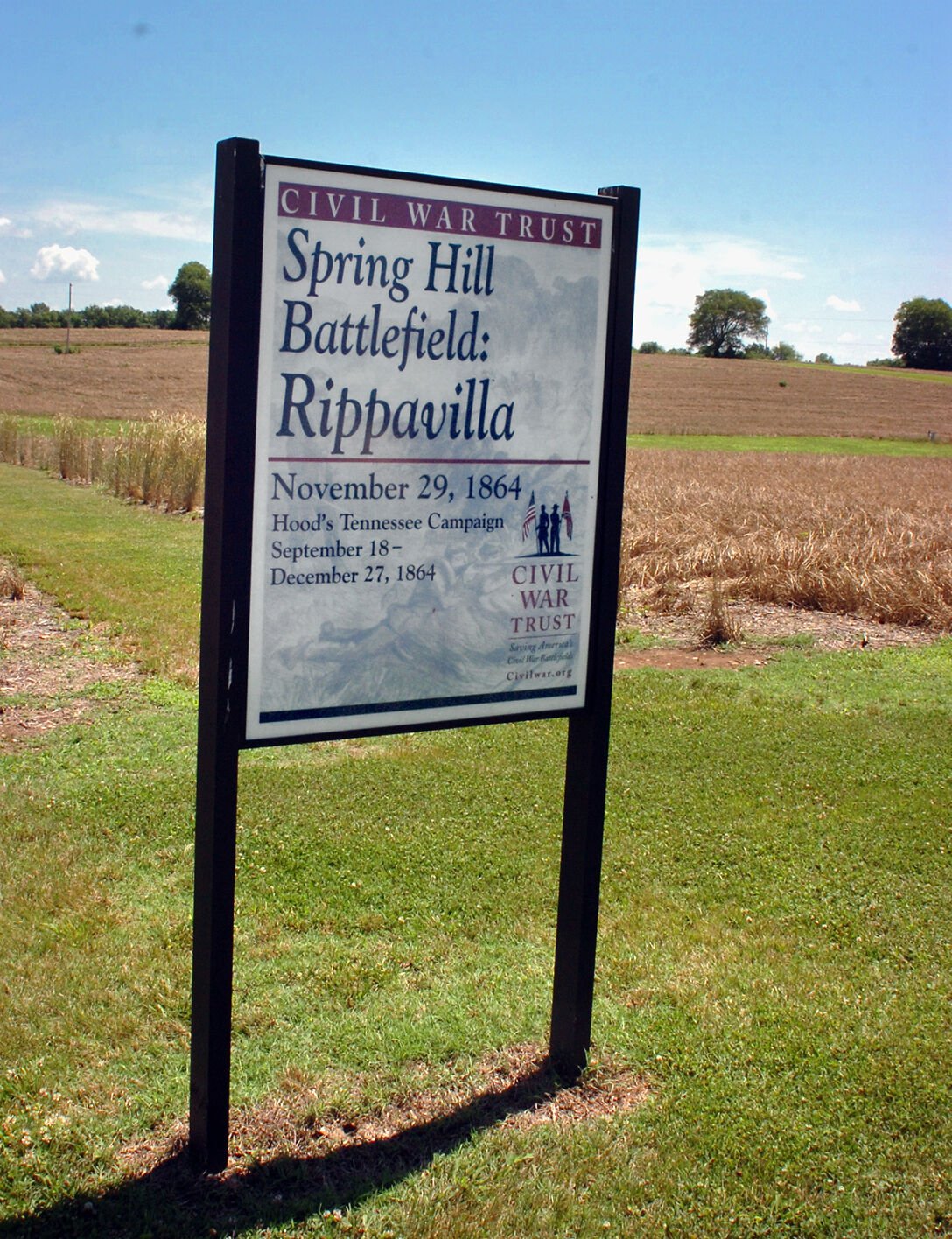 Sign marking a section of the Spring Hill Battlefield that was preserved by the American Battlefield trust when it was known at the Civil War Trust. 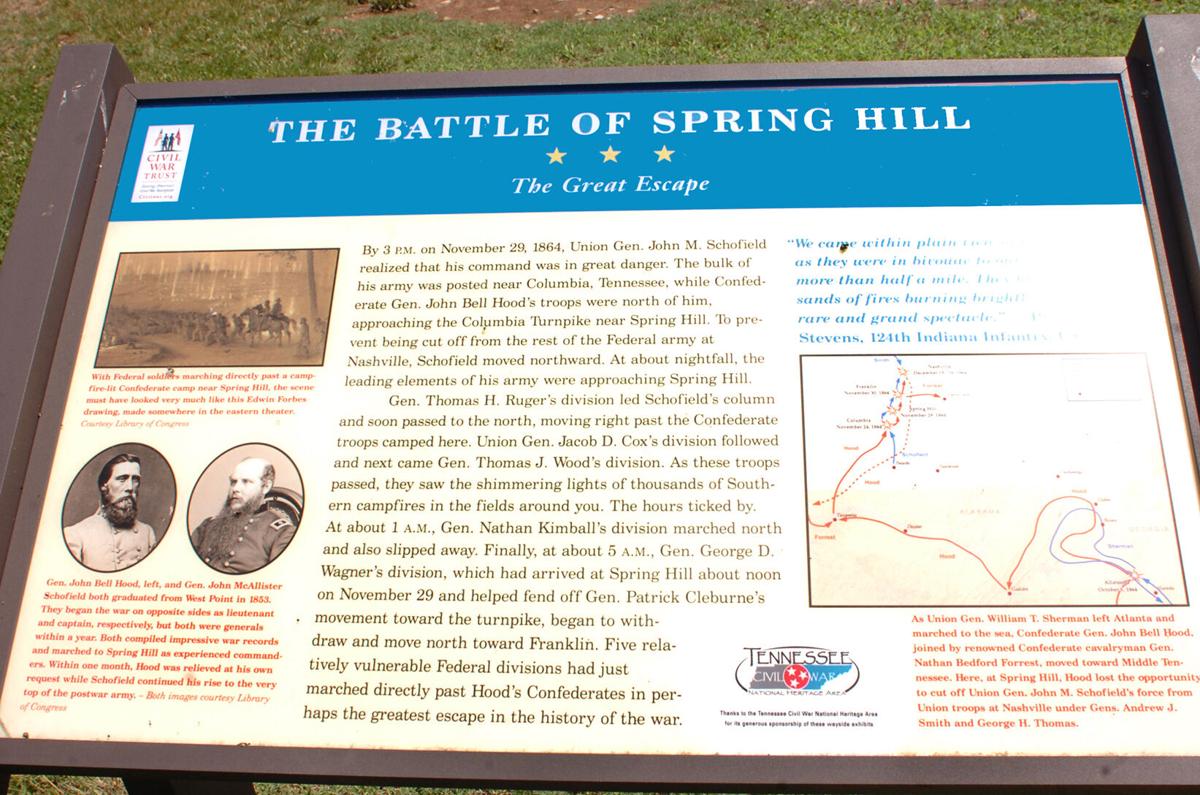 Members of the American Battlefield Trust make their way onto the Spring Hill Battlefield, heading toward the Federal lines.

Two members of an American Battlefield Trust (formerly Civil War Trust) tour group, seen in the upper right-hand corner, appear to be in range of a Federal cannon guarding the top of Spring Hill Battlefield as they explore the site.

Sign marking a section of the Spring Hill Battlefield that was preserved by the American Battlefield trust when it was known at the Civil War Trust.

It was a chance to capture or destroy two Federal Corps before they joined the main force in Nashville, but the Hawkins Boys spent the day marching and never fired a shot in battle. In the end, the Yankees just walked on by.

In late November 1864, the Confederate army of Gen. John Bell Hood came across a force of 20,000 Federals under the command of Gen. John M. Schofield in Columbia, Tennessee, south of the Duck River and trying to cross. Seeing this, Hood came up with a plan to bag the whole lot.

Hood would leave one corps in Columbia with most of the artillery, to fake crossing the river and forcing Schofield to deal with the threat. Meanwhile, Hood’s two other corps would cross the river at a ford some distance away and cut the road at Spring Hill. He would then attack from behind, trapping and eventually defeating Schofield.

“At the gray dawn of the next morning the head of Gen. Frank Cheatham’s Corps, accompanied by Gen. Hood, could have been seen crossing the river six miles above Columbia and making with rapid strides for Spring Hill” wrote William Worsham, regimental musician for the 19th Tennessee of which the Hawkins Boys belonged. “From Columbia to Spring Hill there were two parallel roads not more than half a mile apart, one an old abandoned dirt, the other a pike. The enemy, as early as we, pushed out on the main pike, while we took the old dirt road. Now it was nick and tuck which would get to Spring Hill first. We assumed the fox trot the greater part of the way.”

Schofield learned of Hood’s movements from his cavalry and sent half his forces toward Spring Hill while half remained at Duck River just in case the report was wrong.

The Union forces arrived in Spring Hill just ahead of the Confederates and set up a defense on the hill protecting the Franklin-Columbia Turnpike. It was a position they would hold with some success thanks to confusion in the Rebel ranks.

For the Confederates it was a case of too many generals spoil the battle. Cheatham and his corps arrived first and moved to attack the Federals on the hill. But as the battle started, Hood, having established his headquarters nearby, begin issuing orders as well. Suddenly, all division and brigade commanders found themselves with two different orders.

Cheatham ordered Gen. William Bates’ division to attack Spring Hill with Gen. Patrick Cleburne’s division while at the same time Hood had ordered Bates to attack the turnpike in the direction of Columbia. Cheatham suddenly found himself missing an entire division.

The confusion caused by the two generals resulted in each sending orders to ignore the other general’s orders, as well as divisions and brigades being misplaced and frustrated generals leaving the battlefield to find out who was in charge.

Despite the confusion, the Confederates’ superior numbers were able to push the Federal defenders off the hill and into the town of Spring Hill. Gen. John Brown’s division, the last of Cheatham’s Corps, with the Hawkins Boys and the 19th Tennessee, arrived on the field and were lightly engaged due to more communication problems.

As night fell and Hood’s other two corps arrived at Spring Hill, the general went to bed thinking he had cut the Yankees off from Nashville and would finish the job in the morning.

Schofield had left Columbia with the balance of his Union forces late in the afternoon, and hearing reports of the fighting in Spring Hill, fully expected to fight his way through toward Nashville in the morning.

But as the general approached the town that night, he was greeted with an amazing sight. All along one side of the turnpike there were thousands of camp fires, but there were none on the other side.

The confusion that had gripped the Confederates during the day carried over to the night. Hood’s forces had set up camp, some no more than 75 yards from the turnpike, in a continuous line from south of the town to the north. But there were no guards or sentry posts on the turnpike itself.

All through the night, Schofield marched 20,000 men, along with artillery, cavalry and 800 wagons, past 32,000 sleeping Confederates.

Sam Watkins with the 1st Tennessee Infantry remembered the next day. “About two hours after sun up the next morning we received the order to ‘fall in, fall in, quick.’ Everything indicated an immediate attack. When we got to the turnpike near Spring Hill, lo! and behold! Wonder of wonders! The whole Yankee army had passed during the night. The bird had flown.”

Hood later wrote, “The best move in my career as a soldier, I was thus destined to behold, come to naught.”

The Hawkins Boys had missed much of the battle and therefore suffered no causalities. But that would change the next day, when the men from Hawkins County would catch up to the Federals again in the bloody nightmare that would be the Battle of Franklin.