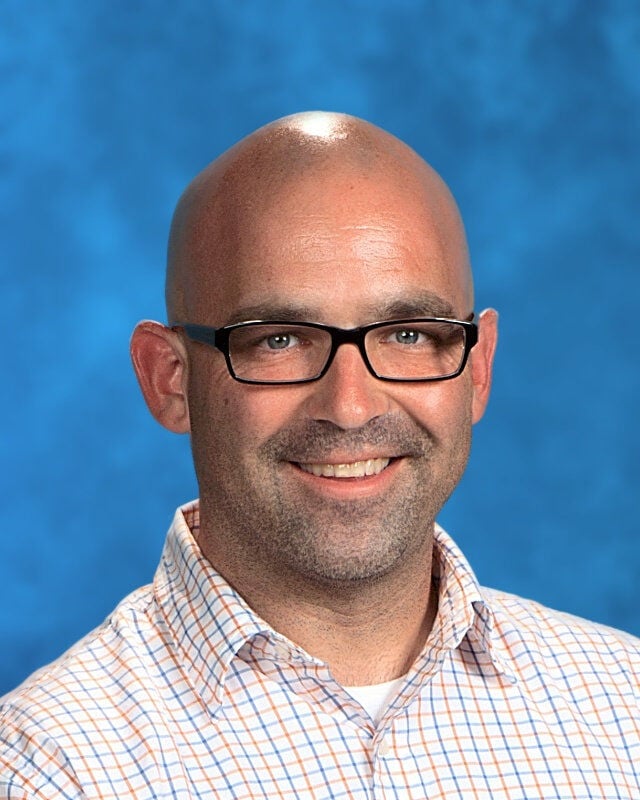 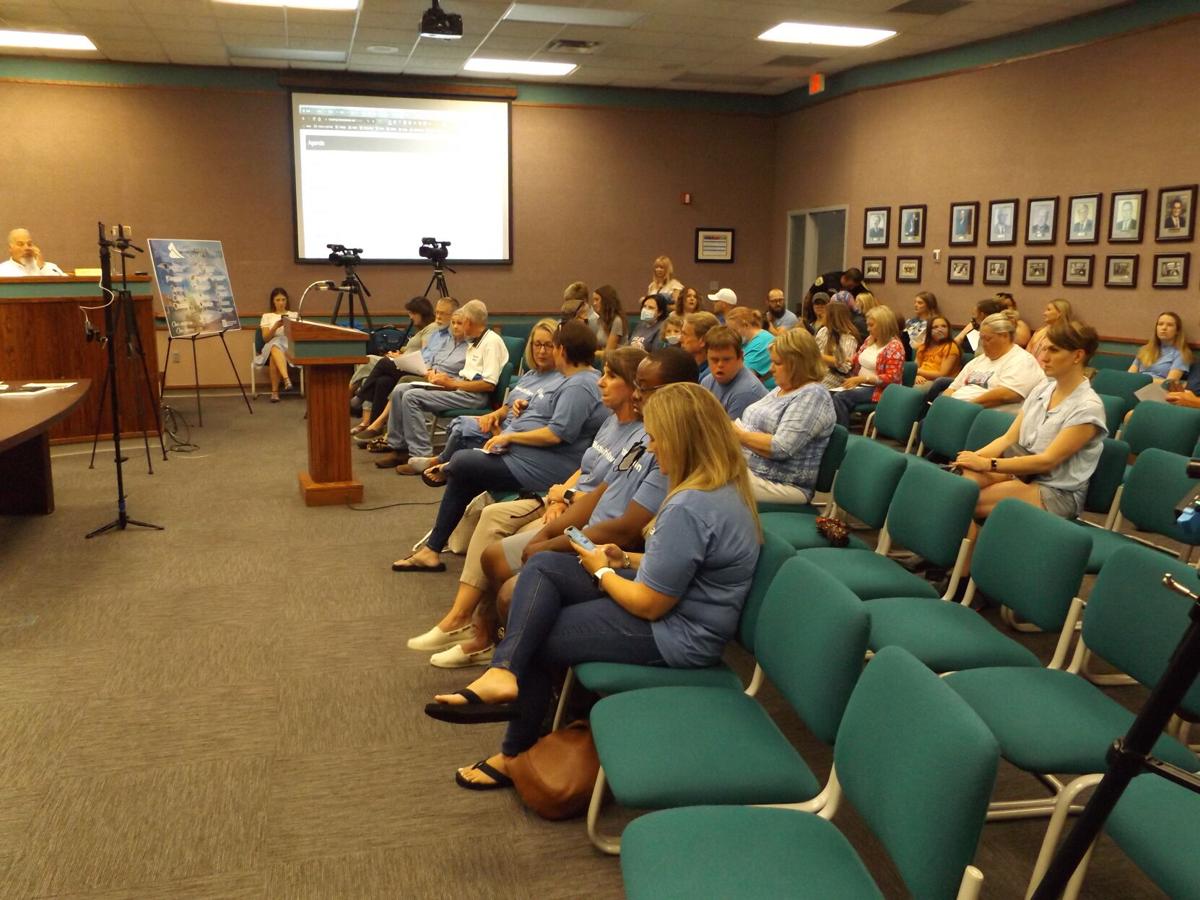 Area residents in T-shirts reading #IstandwithHawn attended the Sullivan County Board of Education meeting on Tuesday. The board voted 6-1 to move forward with a plan from Director of Schools David Cox to fire Matthew Hawn, an assistant baseball coach and tenured teacher on unpaid leave who most recently taught at Sullivan Central High School. 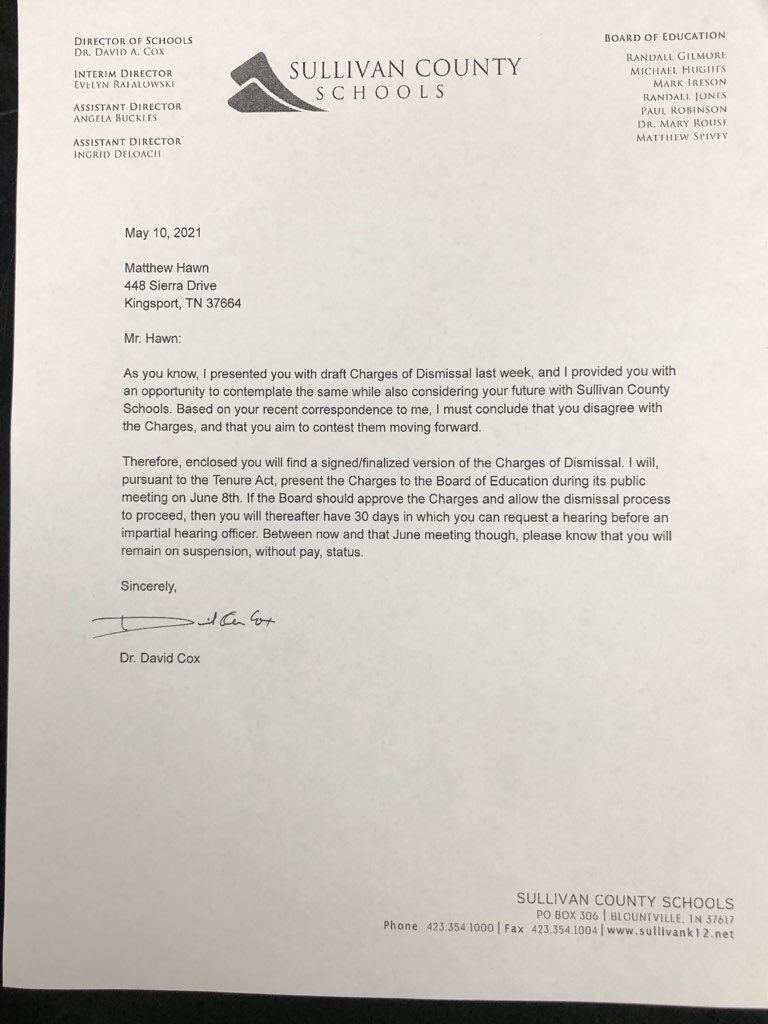 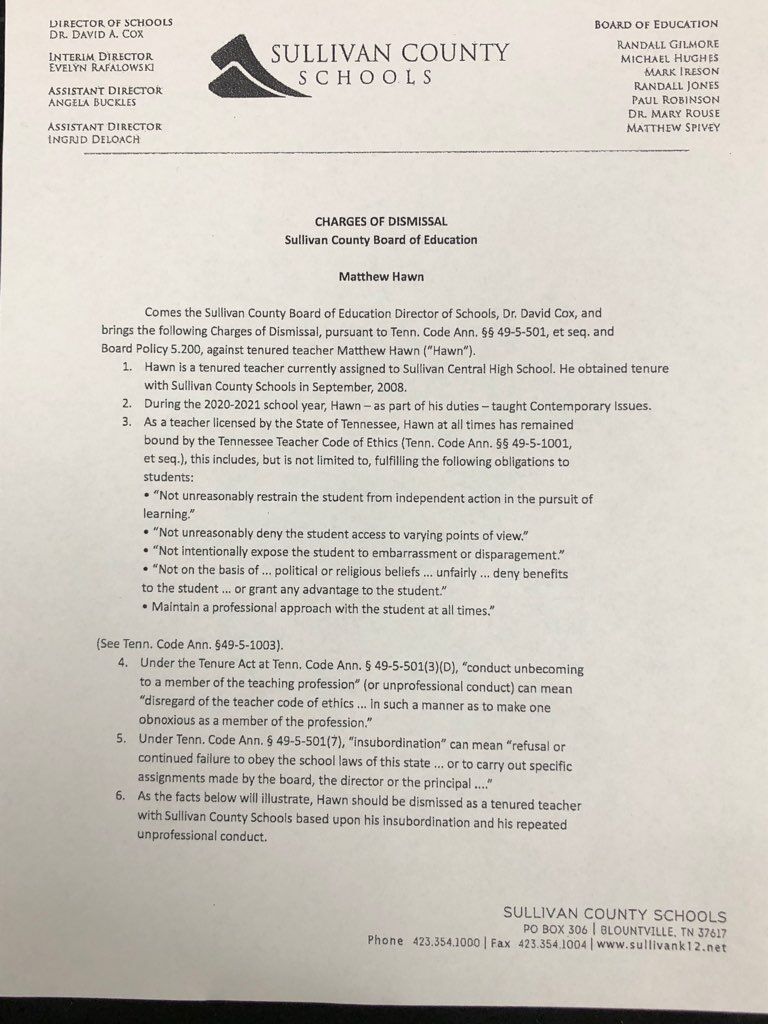 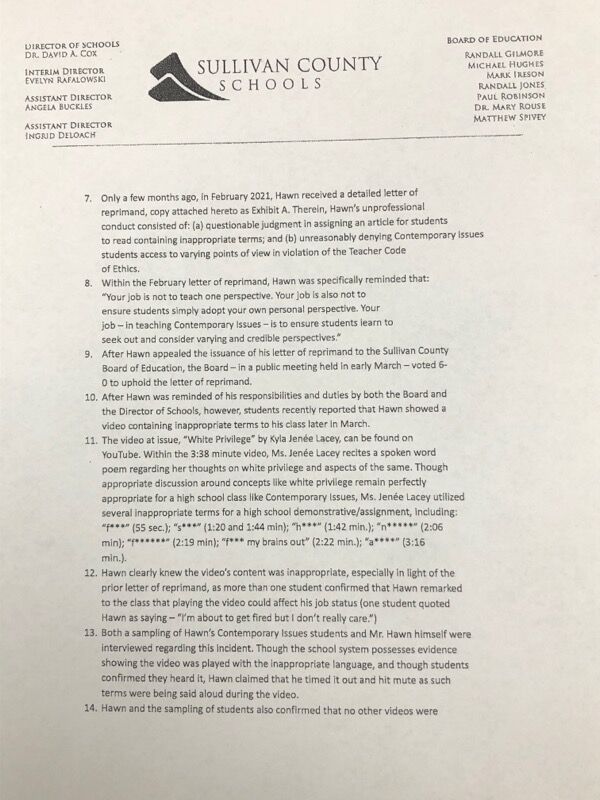 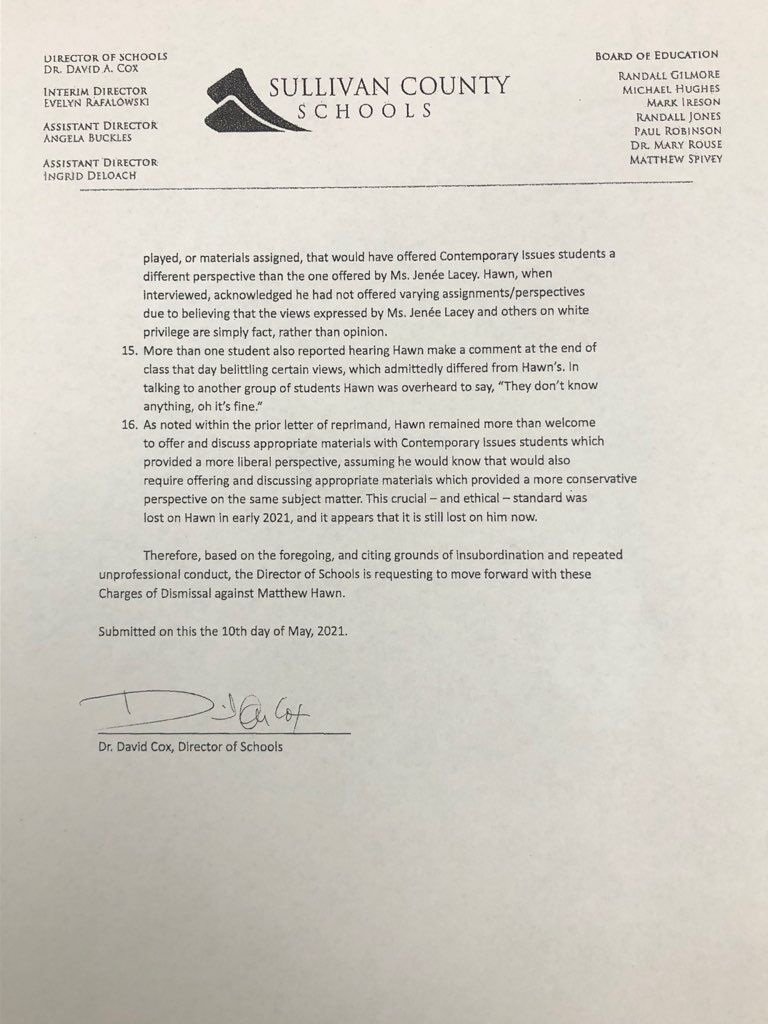 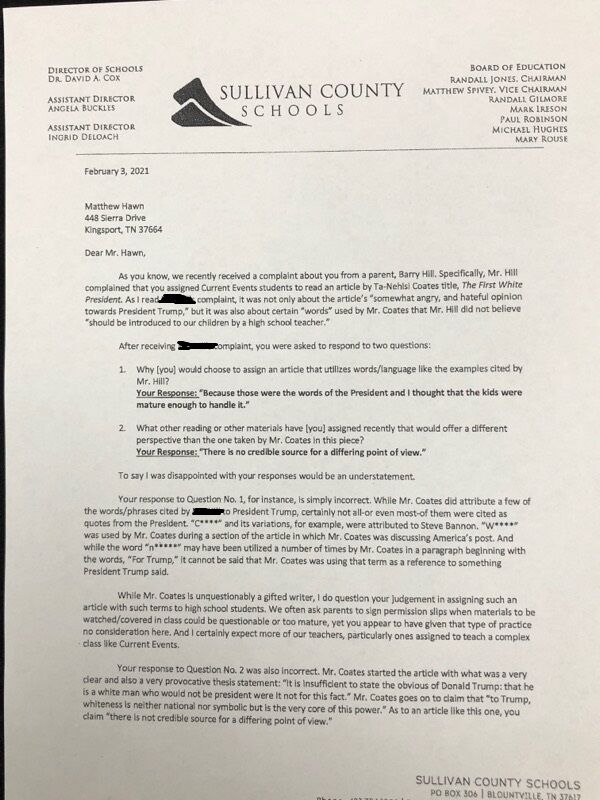 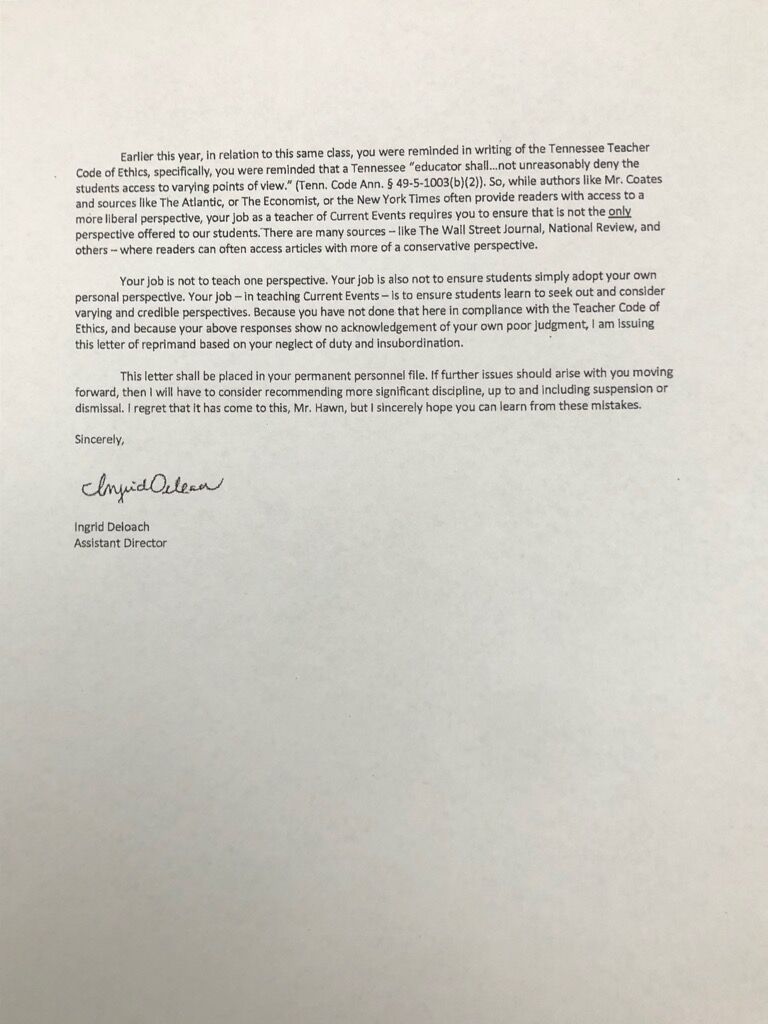 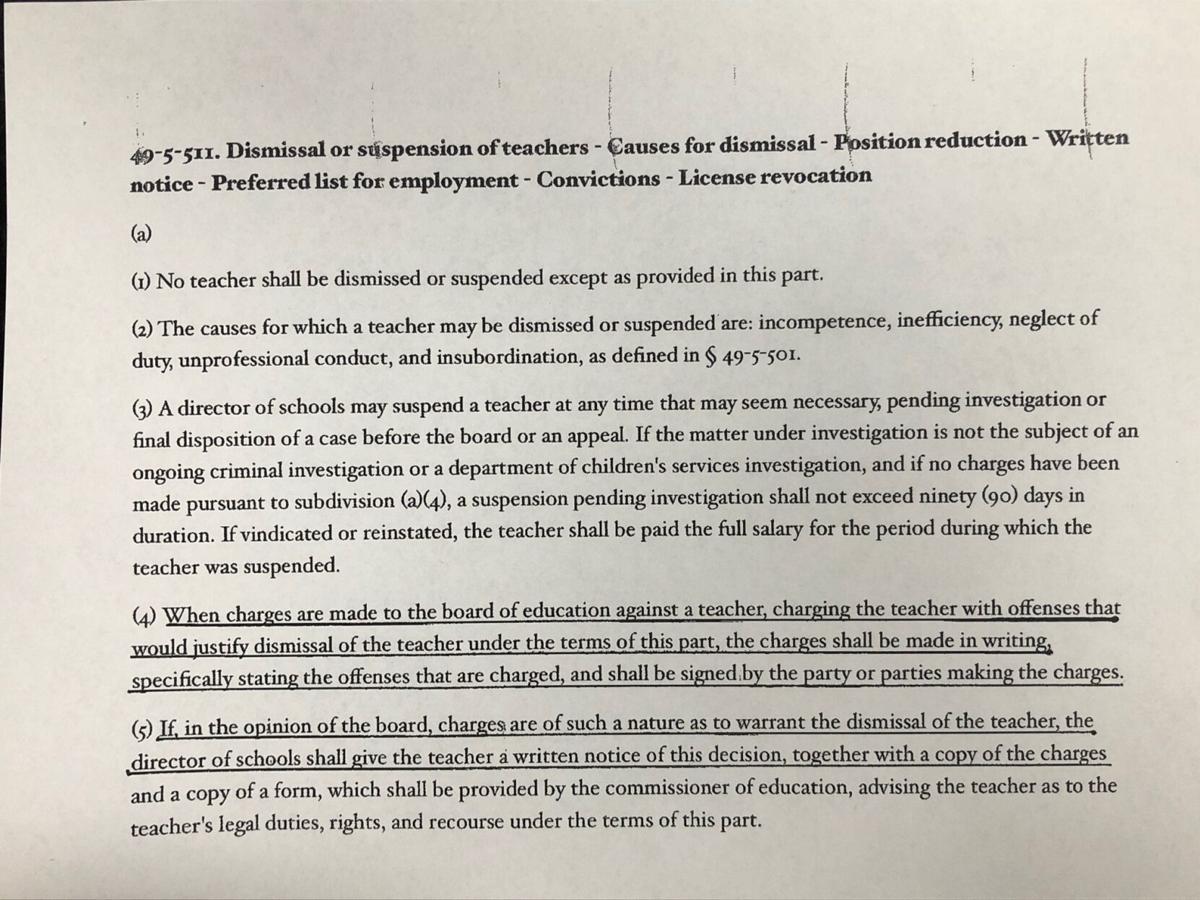 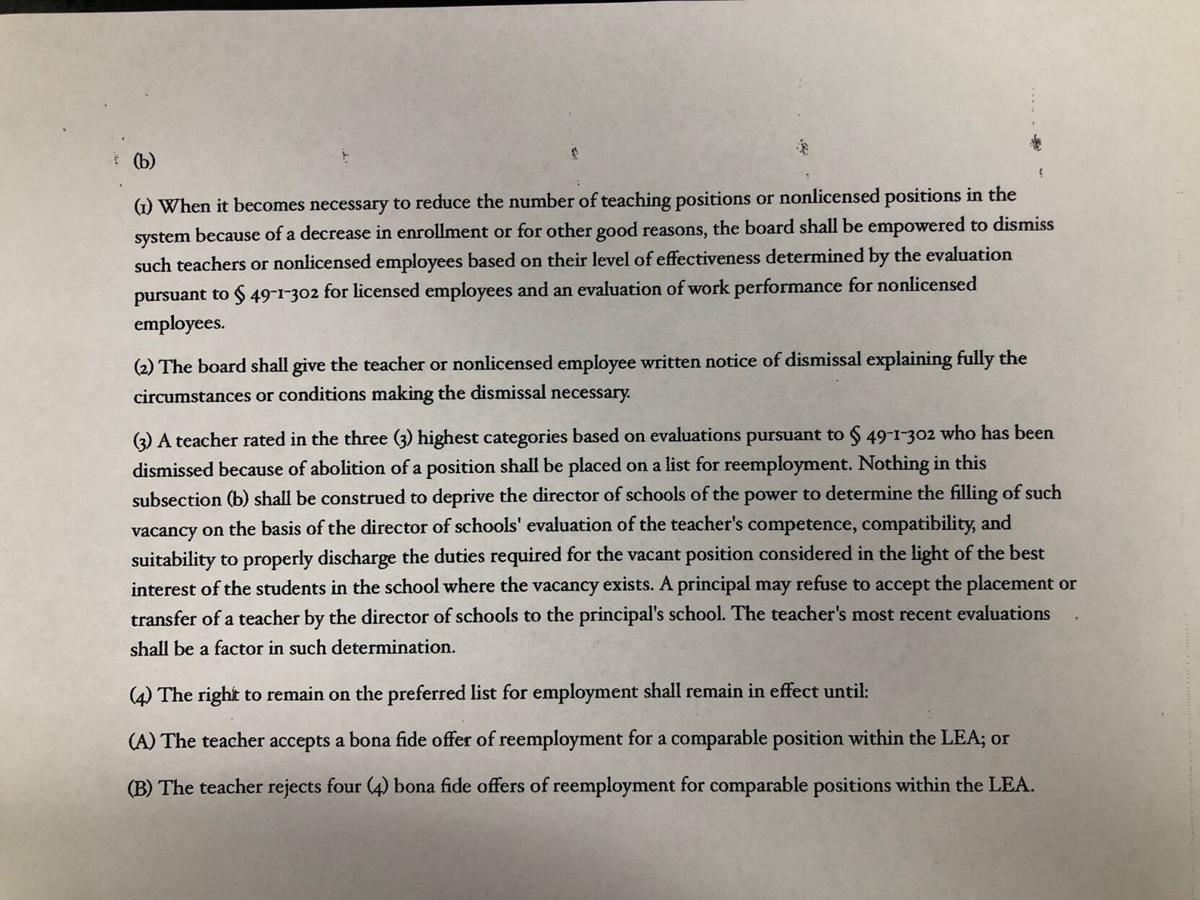 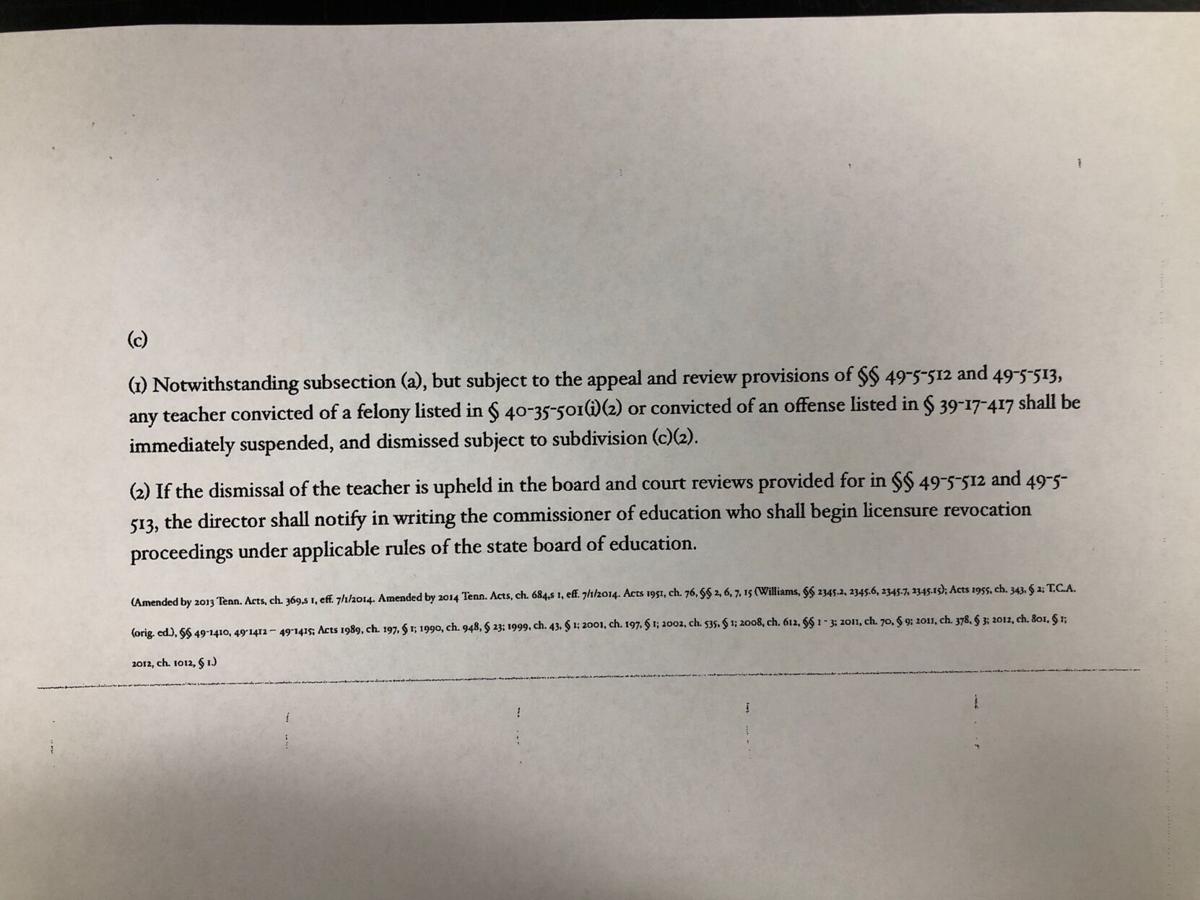 Area residents in T-shirts reading #IstandwithHawn attended the Sullivan County Board of Education meeting on Tuesday. The board voted 6-1 to move forward with a plan from Director of Schools David Cox to fire Matthew Hawn, an assistant baseball coach and tenured teacher on unpaid leave who most recently taught at Sullivan Central High School.

BLOUNTVILLE — A tenured Sullivan County teacher and coach who showed students a profanity-laced YouTube video titled “White Privilege” is a step closer to being fired.

Aside from the profanity, county school officials said former Sullivan Central High School contemporary issues class teacher Matthew “Matt” Hawn also did not assign readings or present any videos of differing opinions on white privilege in March and earlier in the school year.

Cox said the action to proceed with dismissal, which he recommended, is warranted based on insubordination and repeated unprofessional conduct, including refusing to “seek out varying and credible perspectives” for the class to read or view.

However, Cox said it was not a move to quash anti-racism and said racism of any kind is not condoned; is not questioning the appropriateness of discussing white privilege, which he said is a proper topic for a high school class such as Hawn’s; and is not about recent General Assembly action banning the teaching of “critical race theory” in Tennessee schools.

Cox said one student said Hawn in March said, “I’m about to get fired, but I really don’t care.”

Hawn, who has 16 years of service, including almost 13 as a tenured teacher, is on unpaid leave until the termination proposal is resolved. He also was an assistant baseball coach at Central, which is being consolidated this fall into the new West Ridge High School.

The school board Tues- day night voted 6-1 that Hawn’s dismissal should move forward to a hearing officer if Hawn appeals the dismissal within an allotted time frame.

Vice Chairman Matthew Spivey, an attorney, voted against the dismissal, after which Hawn supporters applauded. After the meeting, Spivey said based on the charges Cox presented and his knowledge of the law he did not think dismissal was warranted, although he said that could change upon review of a hearing officer’s ruling if the matter is later appealed back to the school board.

“We can only make a decision on what’s presented,” Spivey said after the meeting. “I didn’t think that warranted complete dismissal.”

School board Chairman Randall Jones said since the board accepted that the charges as presented warranted dismissal, they would go before the hearing officer but that the officer’s decision could be appealed by either Cox or Hawn back to the board.

Hull said Hawn could ask that the hearing be open to the public but the hearing officer could make it private.

A private Facebook group called Sullivan Central stands with Coach Hawn formed on May 23. The group was initially named Reinstate Matthew Hawn but was renamed the same day. Facebook indicates the group has about 1,400 members.

About 20 folks wearing blue T-shirts that read #IstandwithHawn, as well as others wearing blue, attended the meeting.

A woman wearing one of the T-shirts said Hawn and group members were not talking with the media about the matter but indicated displeasure with the actions of Cox and the board on the dismissal. Hawn was not at the meeting, a supporter and Cox said, and no one spoke publicly in his defense during the meeting.

The meeting had no public comment, either on agenda or non-agenda items. Under the item for public comment on agenda items, it said that personnel matters were an “administrative matter and not appropriate for discussion at a board meeting.”

Before Cox moved to terminate Hawn last month, sending him a letter May 10, Hawn had a written reprimand put in his employment record. That was upheld 6-0 with one abstaining by the Board of Education at its March 4 meeting after Hawn appealed his written reprimand from the assistant director of schools.

At issue from February was an article assigned for students to read by Ta-Nehisi Coates titled “The First White President” that included profanity. Assistant Director of Schools Ingrid Deloach wrote in a letter to Hawn it was not suitable for high school students.

Deloach said the lone reading assignment was contrary to Tennessee Code Annotated 49-5-1003 (b) (2) that under the Tennessee Teacher Code of Ethics teachers shall “not unreasonably deny the students access to varying points of view.”