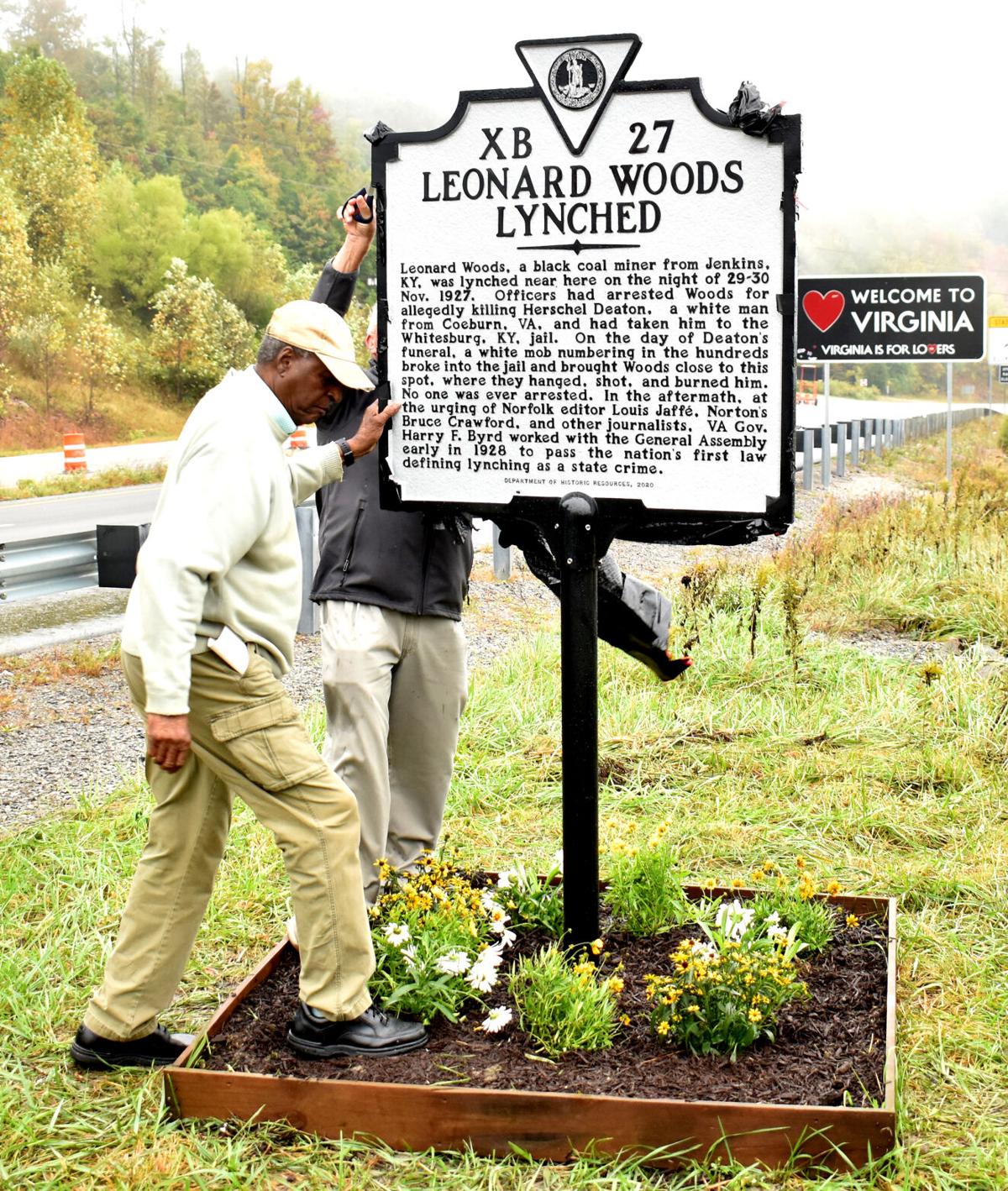 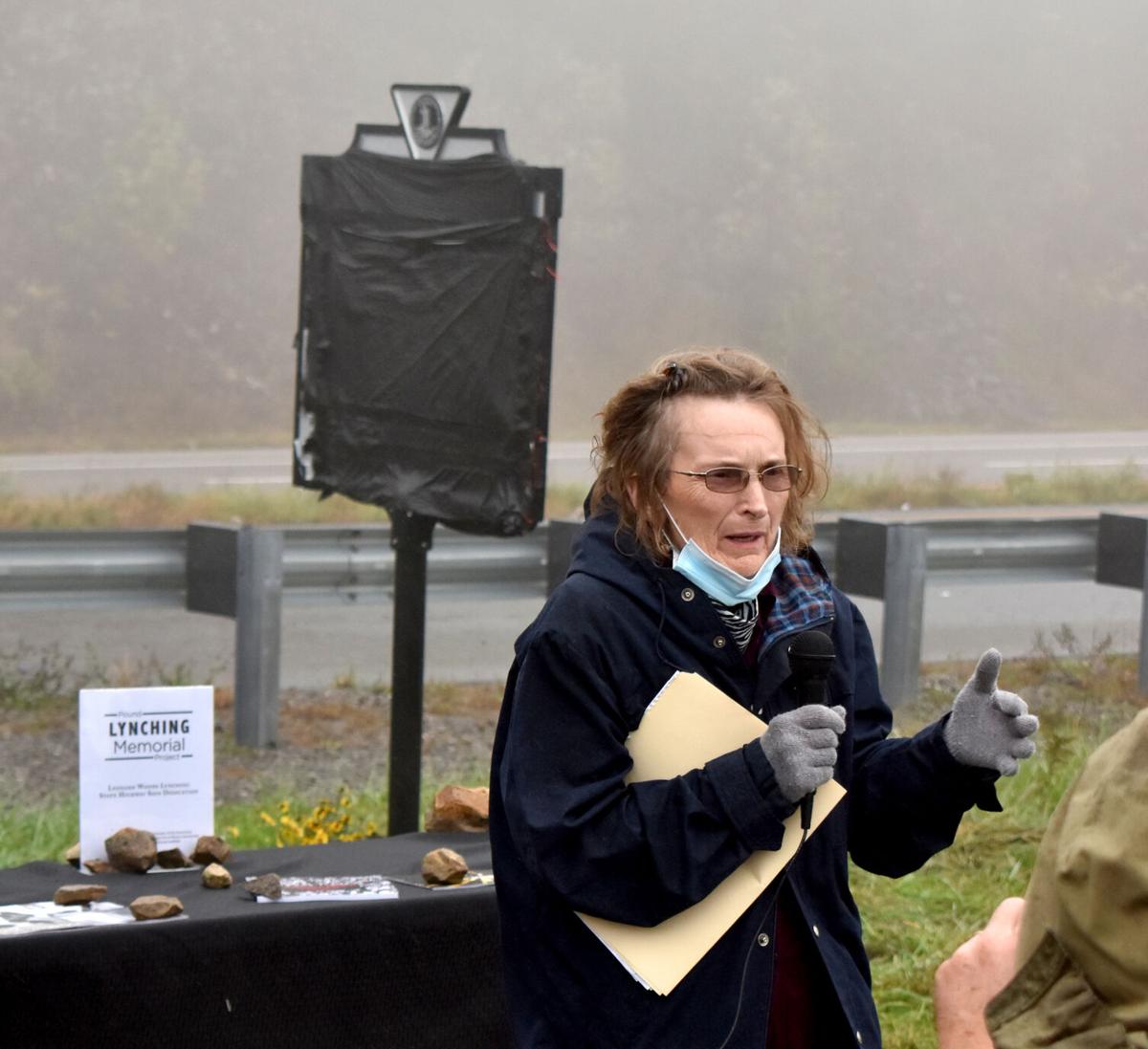 Historical Society of the Pound chairperson Margaret Sturgill speaks during Saturday's unveiling of a state historical marker in remembrance of the 1927 lynching of Leonard Woods at Pound Gap. The Society raised the almost $2,000 needed to purchase and install the marker along U.S. Route 23.

Historical Society of the Pound chairperson Margaret Sturgill speaks during Saturday's unveiling of a state historical marker in remembrance of the 1927 lynching of Leonard Woods at Pound Gap. The Society raised the almost $2,000 needed to purchase and install the marker along U.S. Route 23.

POUND — Almost 94 years after a mob lynched Leonard Wood on the Virginia-Kentucky state line north of Pound, a state historical marker brings context to its impact locally and statewide.

The Historical Society of the Pound and the Wise County Community Remembrance Project Coalition gathered along with about 60 people under drizzly, windy skies Saturday about 100 yards from the Pound Gap site where Wood was hanged, shot and burned on a reviewing stand on the night of Nov. 29-30, 1927.

Preston Mitchell, co-chair of the coalition with UVA Wise history professor Tom Costa, credited the historical society with joining the coalition’s efforts more than three years ago to educate the county about the significance of Woods’ lynching and to establish a marker.

“This was something the historical society had talked about years ago and we couldn’t decide what we needed to do,” said historical society Chair Margaret Sturgill. “When Preston and Dr. Costa came to our meeting, it was the perfect answer.”

Woods had been jailed three nights earlier in Kentucky after he allegedly killed mine foreman Herschell Deaton for not giving him and two black women a car ride.

A mob of about 400 people from the Virginia side broke Woods out of the Whitesburg, Kentucky, jail and took him to a platform on the state line where a highway opening had been dedicated a few days earlier.

Woods was shot on the platform and his gasoline-doused body burned there.

Fleming, Kentucky, Rev. Steve Peake told of his experience with the people of Pound.

“I had no idea of the things that took place on this mountain,” Peake said of growing up on the Kentucky side in the 1950s and ‘60s, “but that didn’t affect the people in Pound. I’m glad that a few dishonorable deeds don’t affect everyone, amen. People still show love and that’s what I learned and what I grew up coming to Pound.”

Peake said he came to Pound every week with his father, shopping in the old Western Auto store and one day buying a bicycle there on installment. One day, Peake said, he told the store manager that he was glad to be close to making the last couple of payments. After the owner found that Peake had earned the money for every payment through various jobs, Peake said, he tore up the last two payment coupons.

“That’s the kind of love the people of Pound demonstrated to people of color,” Peake said.

“Leonard Woods is an example of the justice system and how it works for black people in America,” said Terran Outsey, also a Remembrance Project co-chair, as she compared what happened to Woods with the 2020 killing of George Floyd by then-policeman Derek Chauvin “for a crime for which (Floyd) would never be tried, let alone convicted.

“Leonard Woods is also an example of how the right kind of pressure can make change,” Outsey said, “because after his lynching legislators in Virginia were pushed to make lynching a state crime. This marker is a small step for America but, let’s be honest, it’s a big step for Wise County to stop gaslighting, bare our faults and acknowledge our wrongs even if it’s almost a hundred years later.”

Costa, while crediting the historical society with its willingness to join the coalition in 2018, said he was worried at first how other county institutions would feel about supporting an effort to memorialize the lynching to educate residents.

“It’s been very gratifying to go from initial thoughts with any project that you don’t know how it’s going to turn out or not know how much you’re going to be able to do,” Costa said. “It’s just amazing. Preston went to everybody, recruiting members to join us, and he’s been so effective doing that.”

Costa’s work with students at UVA Wise on researching the Woods lynching led to more information on the 1902 lynching of Wiley Guinn in the Bondtown section of Coeburn, and the 1920 lynching of Dave Hurst in the Kent Junction area of the county. Markers relating the history of those two incidents should be installed at those sites in coming months.

“It was such a positive feedback from the historical society, even before we worked with the Equal Justice Initiative,” Mitchell said. “We can pull the rest of Wise County and the city of Norton onto this because the people of Pound were the first to do it.”