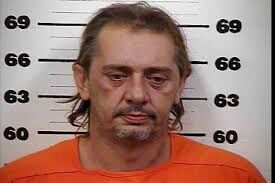 SURGOINSVILLE — Well-known race engine builder Mike Allen Jr. held an alleged trespasser at gunpoint early Sunday morning after the suspect reportedly drove into Allen’s backyard and got out near a storage building.

While en route, Crosby was notified by Central Dispatch that the homeowner had a suspect in his yard — Timothy David Lee Laster, 43, Surgoinsville — whom he was holding at gunpoint.

“Mike stated that he had heard a vehicle enter his yard, and his dog began barking,” Crosby stated in his report. “Mike stated the suspect was seen out of his vehicle around his storage barn in the backyard. The suspect didn’t have permission to be on the property.”

Crosby added, “His presence at that late hour placed him (Allen) in fear for his family to the extent that he armed himself and confronted Timothy in the yard, where he held him until the arrival of officers.”

Laster allegedly stated he was seeking entrance to the Hawkins County Airport to retrieve a vehicle.

Laster was arrested and charged with aggravated criminal trespassing. He was arraigned in Hawkins County Sessions Court on Monday.

He was also wanted in Sullivan County for probation violation and is currently on probation in Hawkins County stemming from a conviction last October for criminal simulation.