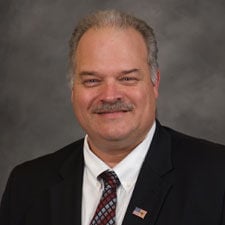 But it would be a school-system-owned private driveway connecting to Henry Harr Road instead of a public road coming in from Jericho Drive off state Route 357.

The Board of Education has set a called meeting solely about another access road proposal for West Ridge High School for 4:30 p.m. on Thursday at Holston Middle School’s library.

The meeting will come before a regular work session where the agenda for the BOE’s March 4 voting meeting will be reviewed.

WHERE DID IDEA ORIGINATE?

“This one is a resolution that some of the commissioners have come to me and talked about,” BOE Chairman Randall Jones of Indian Springs said on Friday.

The resolution would cost up to $200,000 in school system money plus the unknown cost of a new road.

The idea, Jones said, is to put a paved road off Henry Harr Road that would be a school driveway, not a public road as proposed to connect the school campus to state Route 357 just after it ceases being Airport Parkway. That plan would have used Jericho Drive beside Second Harvest Food Bank of Northeast Tennessee, passing the site of a proposed truck stop.

The original concept was a gravel driveway for additional access to the campus, as supported by County Mayor Richard Venable and Jones, but Jones said some commissioners he did not name support the private driveway idea.

That would make the school system, not Kingsport or Sullivan County, responsible for snow removal and maintenance.

WHAT DOES RESOLUTION SAY?

The resolution the school board on Thursday is to consider, Jones said, would approve spending up to $200,000 in school system fund balance or unrestricted reserve to do a design on the access road connecting the campus to Henry Harr Road.

Accessing the campus from the direction of Indian Springs still would require driving on the winding, two-lane Lynn Road to reach Henry Harr Road.

From the south side of Interstate 81, driving in on Shipley Ferry Road still would require traversing the existing Lynn Road and Shipley Ferry Road, both of which have tight curves and abrupt elevation changes.

WHAT CAME BEFORE CURRENT IMPASSE?

The county commission at its Thursday meeting approved a proposal for the highway department to acquire right of way as needed to widen Lynn Road so that two school buses could safely pass at all points along the roadway and to install speed tables and make other safety improvements.

In addition, the BOE at what Jones said was the behest of some commissioners has voted to seek eminent domain information from board attorney Pat Hull.

The school board approved by a vote of 7-0 the proposal to use Jericho Road and a route over land to be bought with a purchase option from Jericho Partners LLC, which includes former Highway Commissioner Jim Belgeri. That plan would have cost $4.8 million up front or $6 million over time using bonds.

However, the commission turned that proposal down in a vote of 2-15 with one abstaining and six absent. Only resolution sponsors Randy Morrell of Holston Valley and Sam Jones of Colonial Heights voted for the proposal.

School board member Mark Ireson of Colonial Heights, originally an opponent of the school that became West Ridge, said he voted for the Belgeri proposal because he wants good and safe access to the school.

However, Ireson said he’d really like to see a four-lane access to West Ridge, not a two-lane one.

“I would like to see us do something bigger if we do another four-lane entrance,” Ireson said.

The existing North and South high schools have direct access to a four-lane, and Central high is a few hundred feet from a four-lane road.

Those are the schools being consolidated into West Ridge.

The group is selling pavers for the new football stadium of West Ridge High School for $100 with words only or $120 with words and images; masks are on sale for $10 each.