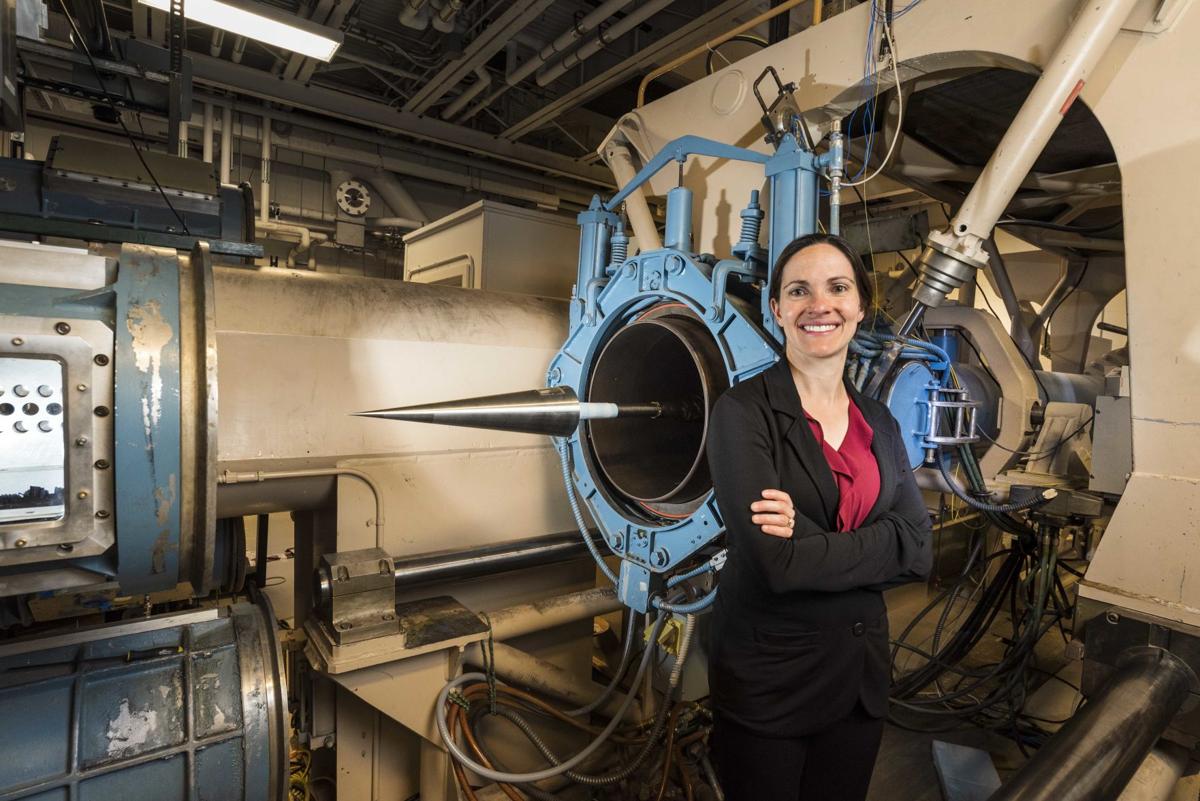 Aerospace engineer Katya Casper has become known for her innovative techniques measuring the effects of pressure on hypersonic vehicles at Sandia National Laboratories wind tunnels. She’s pictured here in front of a model — usually shaped like a cone, cylinder or tailpiece replica of what might be used with flight vehicles — is placed in the tunnel’s 18-inch diameter test section. 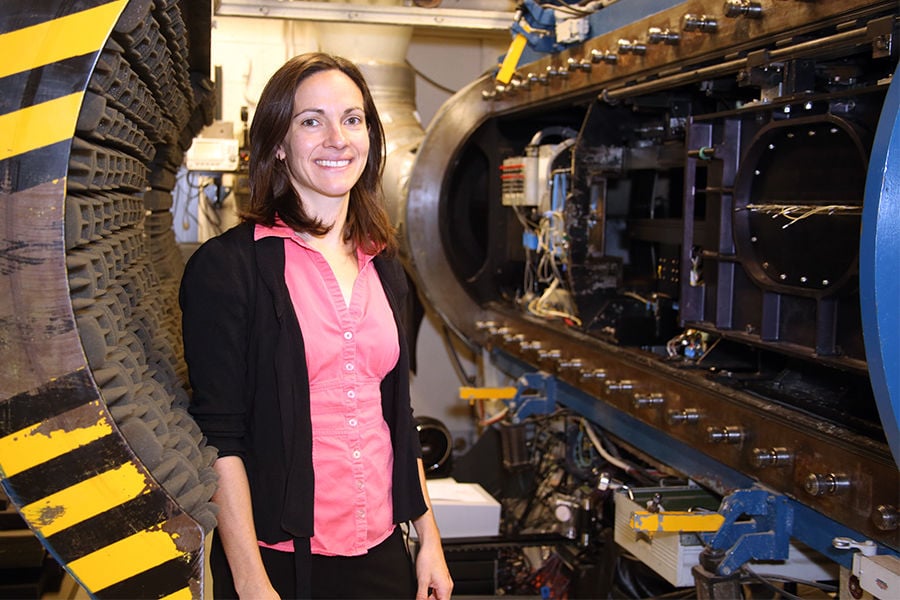 Purdue University alumna Katya Casper has received the Lawrence Sperry Award for a notable contribution in aeronautics and astronautics. She graduated from Dobyns-Bennett High School in 2003. 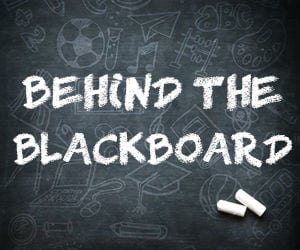 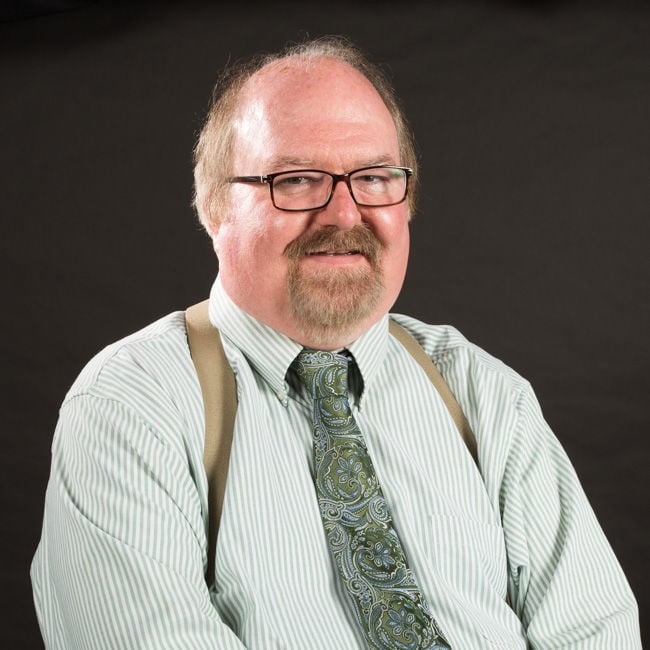 Aerospace engineer Katya Casper has become known for her innovative techniques measuring the effects of pressure on hypersonic vehicles at Sandia National Laboratories wind tunnels. She’s pictured here in front of a model — usually shaped like a cone, cylinder or tailpiece replica of what might be used with flight vehicles — is placed in the tunnel’s 18-inch diameter test section.

Purdue University alumna Katya Casper has received the Lawrence Sperry Award for a notable contribution in aeronautics and astronautics. She graduated from Dobyns-Bennett High School in 2003.

Put a different way, the Kingsport City Schools graduate, an elementary and middle schools product of two local Catholic schools, has become a nationally renowned scientist for knowing her way around wind tunnels.

“I’ve always liked hands-on work, like being in the lab,” Casper said this week from her job at Sandia National Laboratories in New Mexico. Some of her recent work has been in using pressure-sensitive and temperature-sensitive paint on surfaces tested in the wind tunnel, work that usually is done with sensors.

The goal, she said, is working toward perfecting the design of a hypersonic vehicle, overcoming the inherent issues of heat build up and vibration when flying through the air at speeds such as Mach 25.

FROM A ROVER FOR PLUTO TO WIND TUNNEL WORK

According to a January 2015 Sandia magazine, Casper was interested in engineering early in life and at 7 “dreamed of designing the first rover to visit Pluto.” She said that was because her father, a just-retired, 40-year mechanical engineer at Eastman Chemical Company, was into astronomy while she was growing up in Kingsport. She took flying lessons at age 17 in exchange for working at the Horizon Aviation flight school’s front desk near Tri-Cities Airport. She didn’t earn a pilot’s license but did solo before heading off to college.

She graduated from Dobyns-Bennett High School in 2003 as valedictorian after having attended Saint Mary’s Catholic School in Johnson City for middle school and Saint Dominic Catholic School for elementary. Her undergraduate major was in aerospace engineering at North Carolina State University, where she led a senior design team in building a turbojet-powered aircraft. She earned her master’s and doctoral degrees at Purdue University.

She interned at NASA, Boeing, Purdue and Sandia while completing her doctorate and now works in Sandia’s Aerosciences Department studying experimental fluid mechanics.

WHAT AWARD DID SHE RECENTLY WIN?

Casper recently received the Lawrence Sperry Award. It is given by the American Institute of Aeronautics and Astronautics for a notable contribution by a young person to the advancement of those sciences.

Casper was honored for her “highly significant contributions to the fundamental understanding of boundary layer transition and fluid-structure interactions in hypersonic flows through novel diagnostics with national program impact,” according to an AIAA press release. She received a certificate and trophy during the AIAA’s Aerospace Spotlight Awards Gala May 15 in Washington, D.C.

“I’m honored to receive the 2019 AIAA Lawrence Sperry Award and hope I can live up to the standards set by previous winners as my career continues,” Casper said, adding that Purdue and Professor Steven Schneider, her advisor, paved the way for her hypersonic career at Sandia. Her master’s thesis was “Hypersonic Wind-Tunnel Measurements of Boundary-Layer Pressure Fluctuations,” and her Ph.D. dissertation was titled “Pressure Fluctuations Beneath Instability Wave Pockets and Turbulent Spots in a Hypersonic Boundary Layer.”

(Science note 2: She’s in some good company. Past recipients of the award include American astronaut, physicist and engineer Sally Ride, who got the award in 1984. Ride, who died in 2012, was the third woman in space following two Soviet cosmonauts.)

WHAT IS IT LIKE WORKING IN A MALE-DOMINATED FIELD?

Most of those honored with the Sperry Award since 1969 have been men.

“When I started out at Sandia, in the building I was working in I was the only female,” Casper said, adding that she doesn’t know why women shy away from this kind of career. However, since she began full-time at Sandia, she said more and more women are working and interning there, although she said women still are outnumbered by men in the field.

When she’s not working, Casper likes the outdoors, including rock climbing, ultimate Frisbee, mountain biking and skiing. In high school, she played a lot of chess but said she doesn’t have much time for that now.

QUIZ: Where did Katya Casper attend elementary school when she envisioned designing a rover to explore Pluto?

BONUS QUESTION: How fast would Mach 14 be?

Rick Wagner covers education for the Times News. Email him at rwagner@timesnews.net.