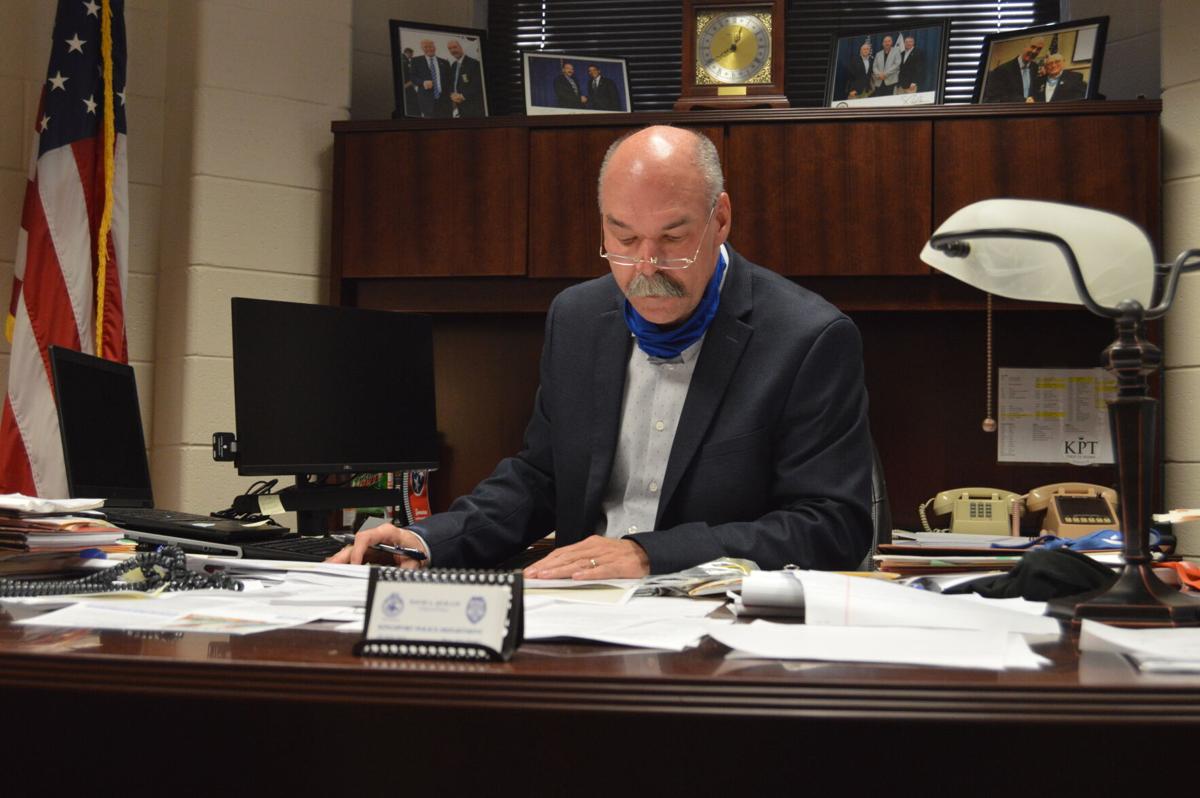 Kingsport Police Chief David Quillin works at his desk in the Justice Center following an interview with the Times News. Quillin, who has been with the department for 35 years — the last seven as chief — will officially retire on Dec. 31. 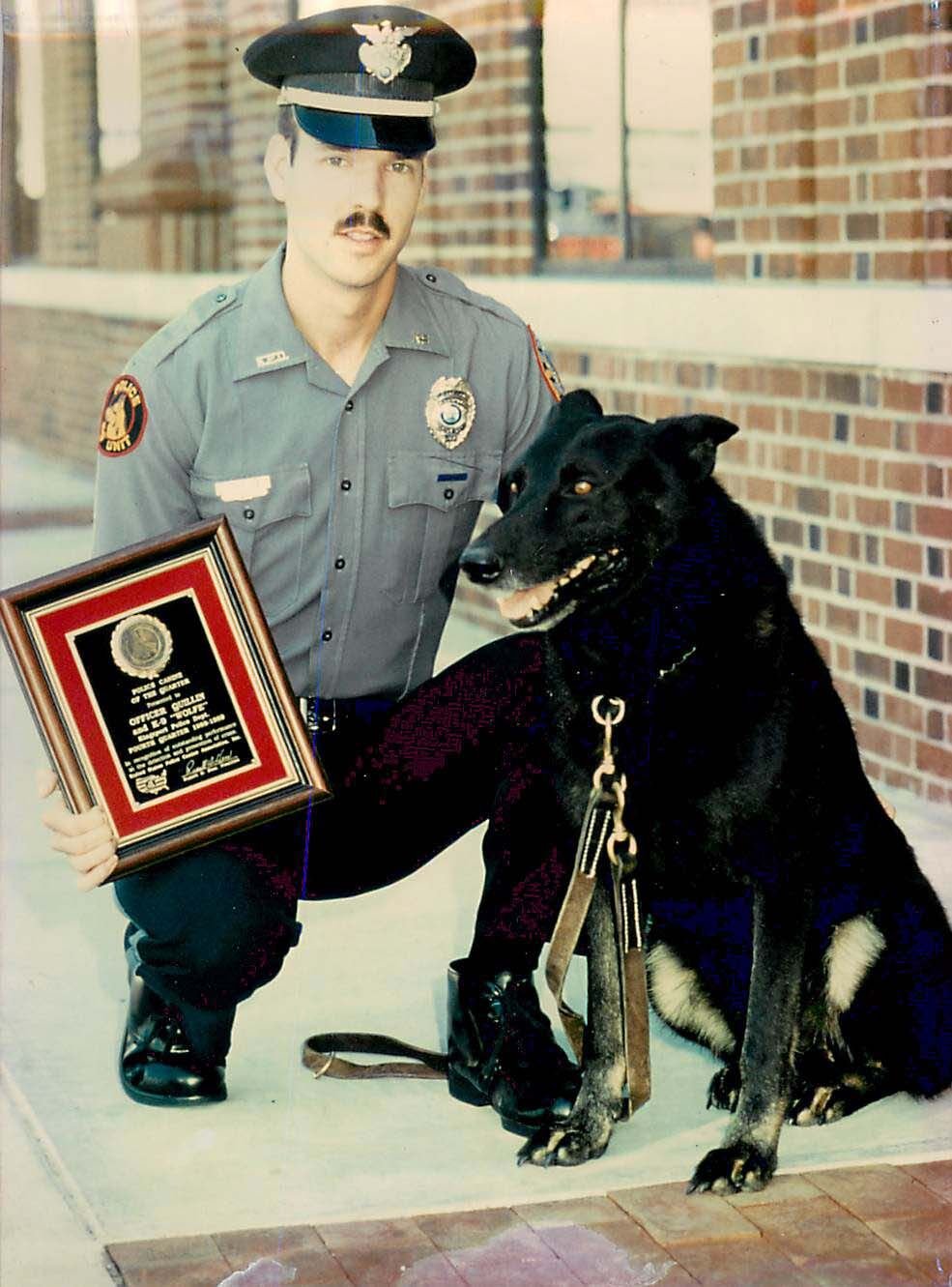 This picture of Police Chief David Quillin and Wolf sits on a bookshelf in his office. During his earlier years with the Kingsport Police Department, Quillin served as a K-9 handler.

Kingsport Police Chief David Quillin works at his desk in the Justice Center following an interview with the Times News. Quillin, who has been with the department for 35 years — the last seven as chief — will officially retire on Dec. 31.

This picture of Police Chief David Quillin and Wolf sits on a bookshelf in his office. During his earlier years with the Kingsport Police Department, Quillin served as a K-9 handler.

KINGSPORT — David Quillin began his career at the Kingsport Police Department as a reserve officer in 1984. Over the years, Quillin held numerous positions, from patrol officer to vice detective, and rose through the ranks until ultimately becoming the top cop in the Model City.

Now, after 35 years with the department, Quillin has announced he’s retiring at the end of this year.

The Times-News sat down with Quillin earlier this year to talk about his time with the department, what he plans to do in the future and any advice he might have for the next chief of police in Kingsport.

“We all have an expiration date, and over three and a half decades of being a cop, it’s time to step back, enjoy some things and to do some things I want to do. The department is in a good place, and it’s time to jump off the merry-go-round,” Quillin said. “It is bittersweet, I guess. When you work somewhere for 35 years ... you think a lot about the people. I’ll miss that aspect of coming in here, being around some of the best people in the world, the best people I know.”

Quillin, 57, is a Kingsport native who attended three years at Lynn View High School (until it closed) and was a member of the first graduating class of Sullivan North (though his pedigree is still a Lynx, he argues). He’s a graduate of Tusculum University (with a bachelor of science in organizational management), the FBI National Academy and Leadership Kingsport.

Quillin began his career in law enforcement as a reserve officer with the Kingsport Police Department in 1984, joining the ranks full time the following year. Over the decades, Quillin served as a corrections officer, patrol officer, vice detective, supervisor of the training unit, Criminal Investigations Division commander, administrative captain, and deputy chief of both the administrative and operations bureaus.

The chief also found time through the years to serve as a K-9 handler, SWAT operator, defensive tactics and firearms instructor, and general departmental instructor. Quillin was selected to be the department’s 14th chief in September 2013.

For a man who’s worked since he was 12 years old, first on a paper route of course, then at a filling station during high school, Quillin said it’s going to be nice to sit back and relax, at least for a little while.

“I’ve got some hobbies and fly fishing is one of them. I expect to spend a little more time in the mountain streams around here. I want to do some traveling, see some different places around the U.S.,” Quillin said. “I’ve no plans to move anywhere. Kingsport has been and always will be home. I’ve had opportunities to travel across the state and to different parts of the country ... but there’s no place like home.”

During Quillin’s tenure as chief, the KPD went through its reaccreditation process, earning the Gold Standard of Excellence. Quillin oversaw a structural realignment of the department to create efficiencies and save tax dollars, created a full-time public information officer position and embraced social media as a tool for crime prevention, suspect identification and public relations.

Quillin placed a renewed emphasis on cold cases, returned the department to an all navy blue uniform and established the Law Enforcement Memorial and Eternal Flame at the corner of Clay and Market in downtown Kingsport.

“Being deputy chief for 13 years, I thought I had a fairly good understanding of what a police chief did. Until you sit in the chair, you have no idea what the job is like,” Quillin said. “Any chief, to be successful, you have to always do the best you can and take care of the men and women that serve the city.”

Quillin offered thanks to a number of people who supported him over the years: first and foremost his parents and family, but also the city managers and mayors who served during his tenure as chief, the many members of the Board of Mayor and Aldermen, the executive staff at the department and the community.

Quillin’s advice to his successor is to “think really hard before you make decisions. It’s important to think things through completely and look at all possible outcomes and who’s affected when decisions are made,” Quillin said. “At the same time, try and be as fair and consistent as you can, don’t have knee-jerk reactions and always do your best to take care of your employees who do a great job day in and day out.”

“It affects everyone who wears the uniform. When you look at things that have gone on across the country, don’t judge us on the actions of others. Judge us on our relationships, our professionalism and our actions.”

What’s the most challenging part of the job?

“I’ve always tried to be fair and consistent. I think that’s so important. I’m not sure I’ve always got that right, but it’s something I’ve tried to make a priority when dealing with people. To always be fair, consistent and treat people how you would like to be treated if you were in their place.”

“Nothing sticks out. When we began to discuss the homeless issue 18 months ago, a lot of work and effort went into figuring out the best practices, and we brought on a social worker. That’s in place and clicking on all cylinders. Maybe that was the only thing I wanted to see through.”

“It did consume a lot of energy. I took an oath to protect, serve and defend the Constitution and certain rights and privileges citizens have. Being able to peacefully protest is certainly protected. That’s my stance and it’ll always be that.”

And on the homeless situation in town?

“We would never target a homeless person or the homeless population. Being homeless is not a crime. At the same time, we have neighborhoods where the citizens are being subjected to criminal behavior, and we absolutely have a right and a responsibility to go up there and provide police services they expect and demand. It’s always about targeting criminal behavior and not the homeless.”