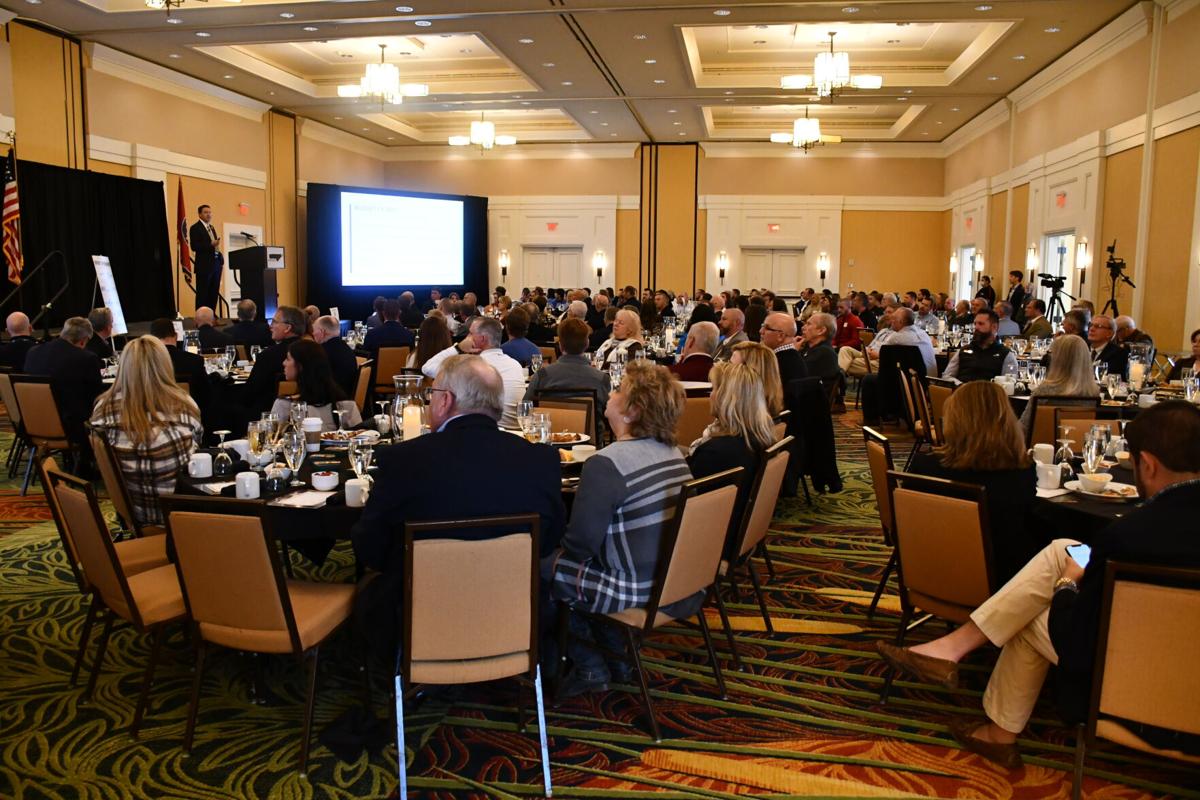 City, county and state officials, business, education and community leaders all gathered Friday morning to hear from City Manager Chris McCartt and Mayor Pat Shull about what’s going on in the Model City. 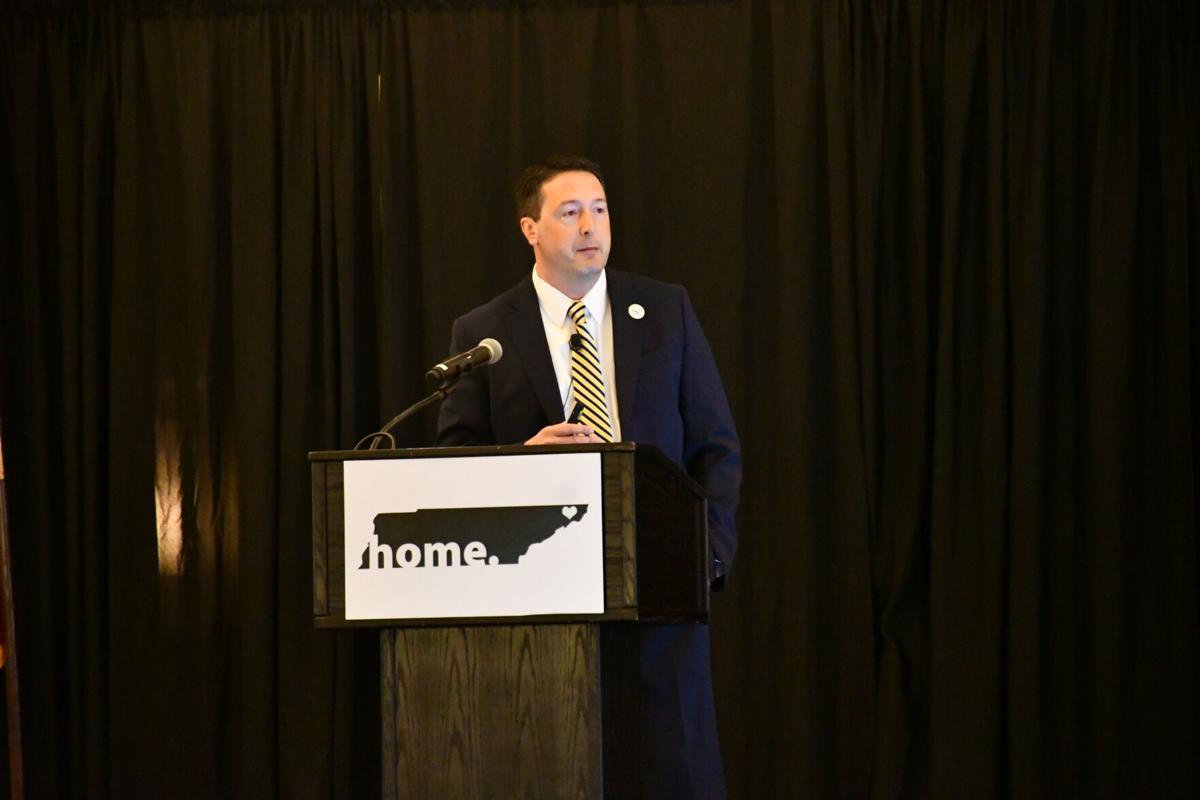 City Manager Chris McCartt speaks during Friday's State of the City event at the Meadowview Conference Resort and Convention Center. 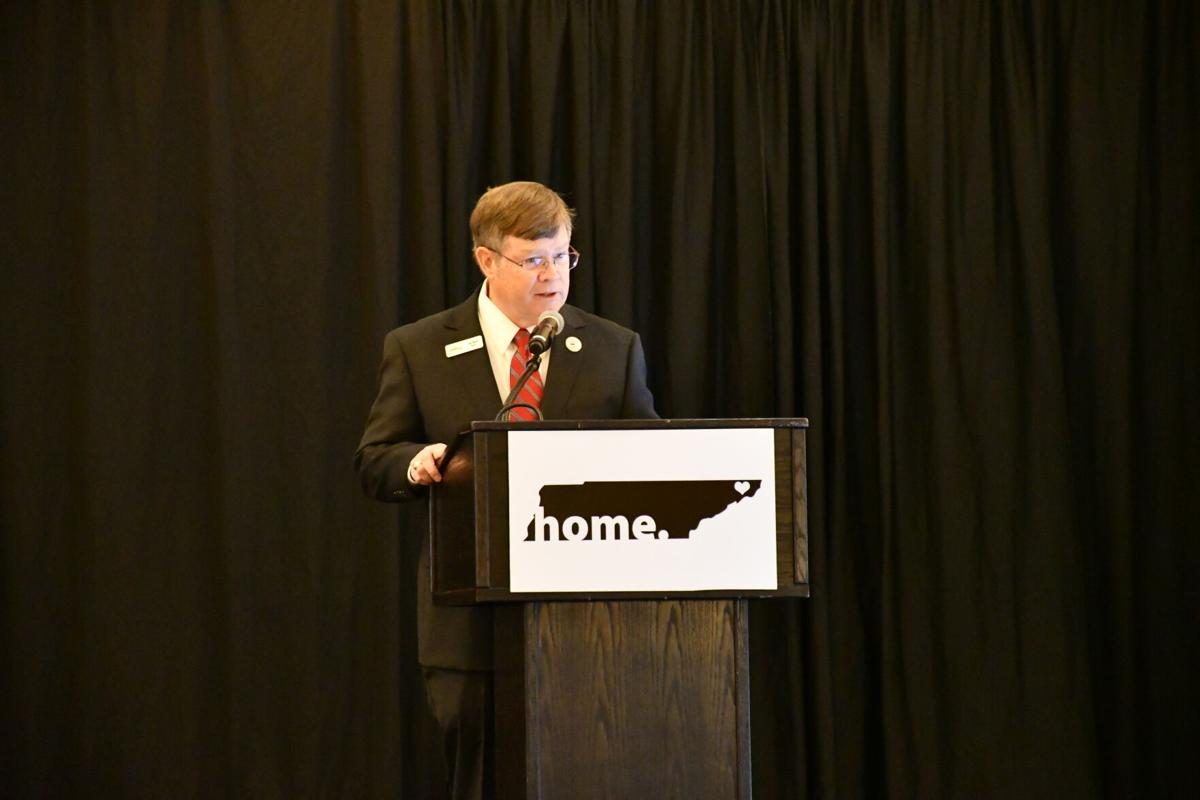 Mayor Pat Shull led off the remarks during Friday's State of the City event. 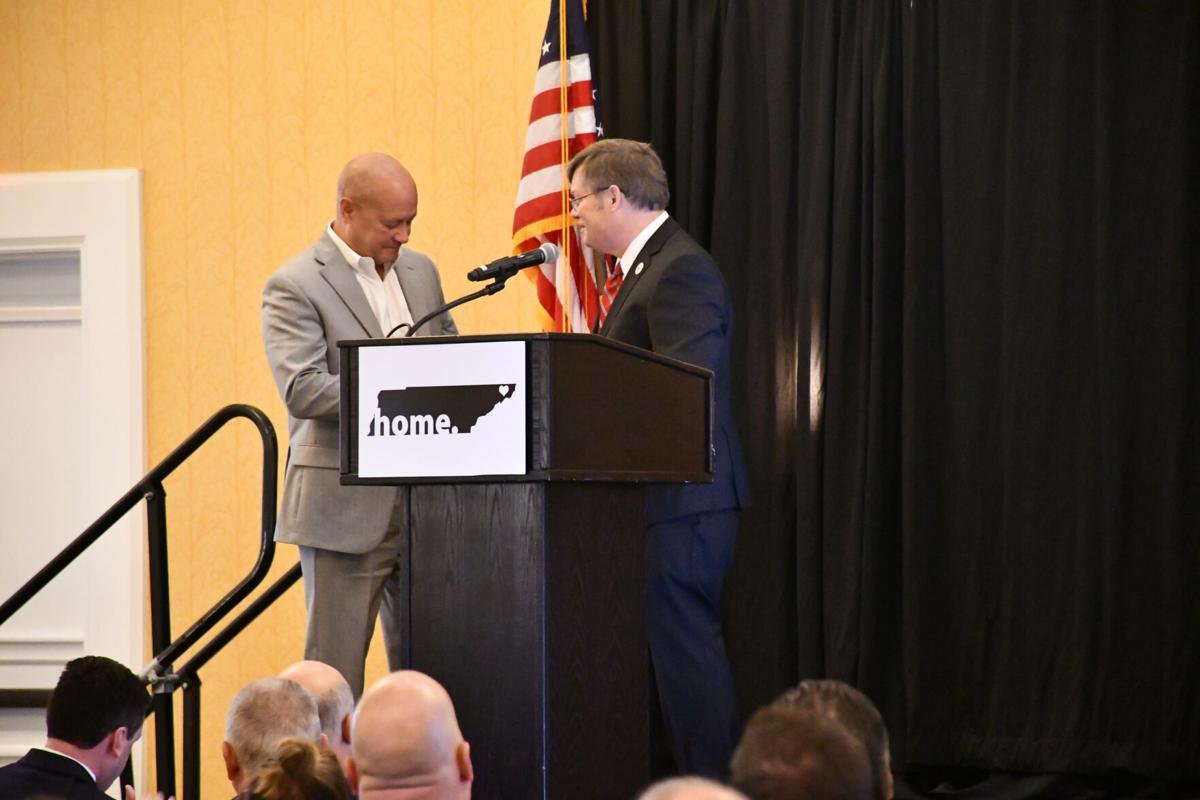 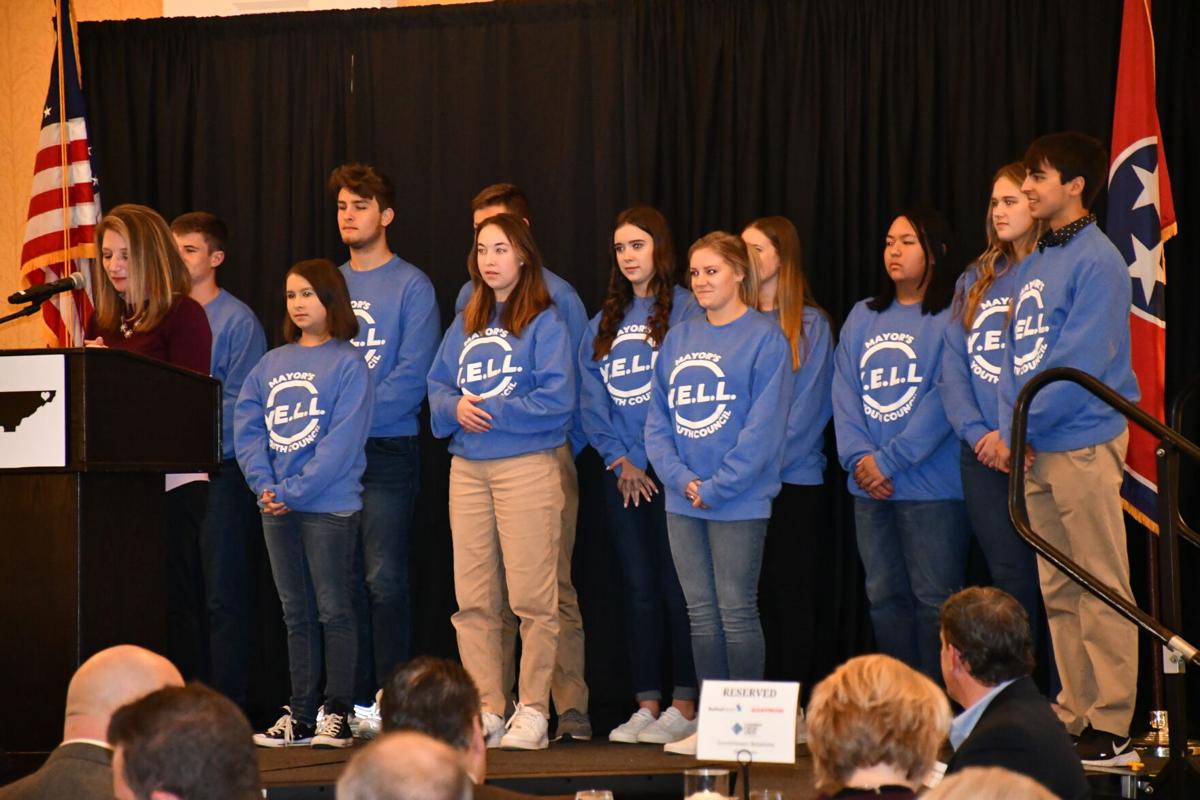 Y.E.L.L.! — the Mayor’s Youth Council — leads the Pledge of Allegiance during Kingsport’s State of the City event on Friday at MeadowView Conference Resort & Convention Center. 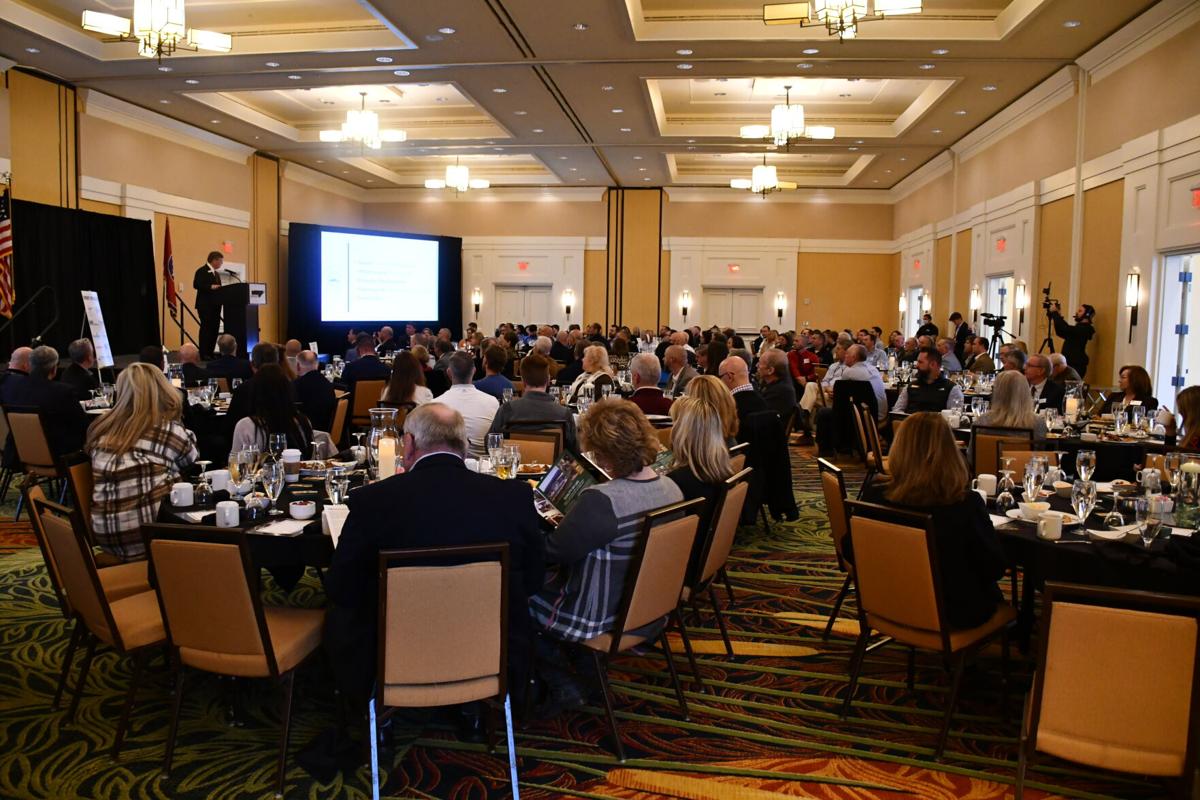 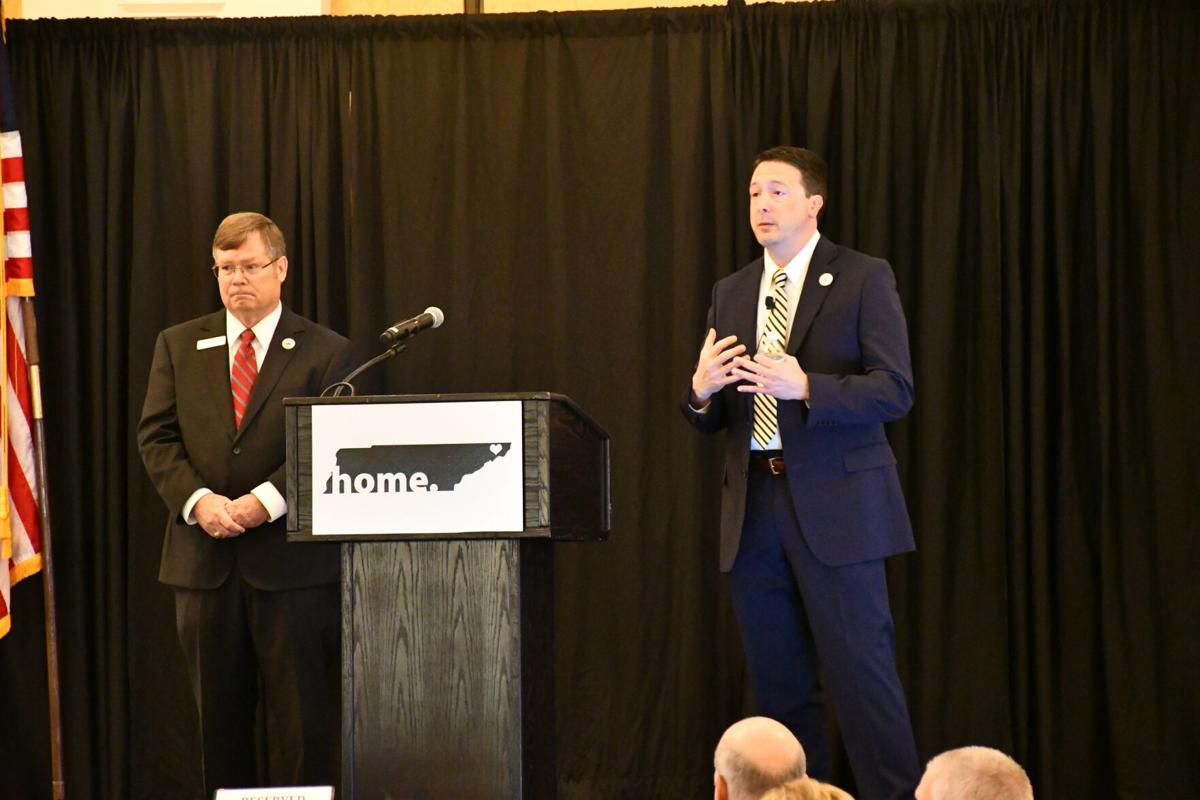 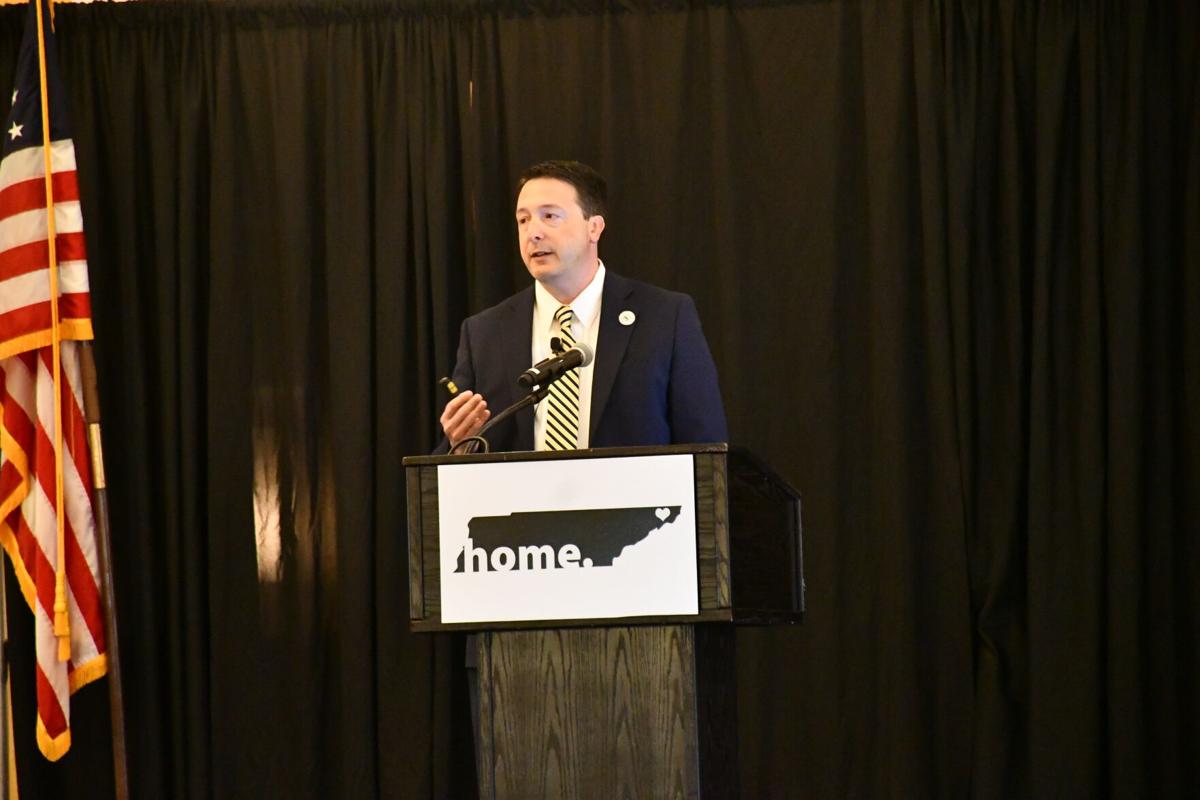 City, county and state officials, business, education and community leaders all gathered Friday morning to hear from City Manager Chris McCartt and Mayor Pat Shull about what’s going on in the Model City.

City Manager Chris McCartt speaks during Friday's State of the City event at the Meadowview Conference Resort and Convention Center.

Mayor Pat Shull led off the remarks during Friday's State of the City event.

Y.E.L.L.! — the Mayor’s Youth Council — leads the Pledge of Allegiance during Kingsport’s State of the City event on Friday at MeadowView Conference Resort & Convention Center.

KINGSPORT — The Model City weathered the storm that was 2020 and came out of that year in good financial shape. However, this past year was clearly better than the one before, and city officials say Kingsport is well-positioned for 2022 and beyond.

These were some of the comments from Friday’s State of the City event, held at the MeadowView Conference Resort & Convention Center.

For the past eight years, Kingsport has held such an event to talk about the financial picture of the city, to note some of the projects that have been accomplished over the past year, and to give a preview of the major things planned for the near future.

City, county and state officials as well as business, education and community leaders gathered to hear from Mayor Pat Shull and City Manager Chris McCartt what’s going on in the Model City.

A WORD FROM THE MAYOR

Shull, who was re-elected to a second term in May, led off the hour-long presentation by hitting some highlights on finance, infrastructure and economic development.

“Overall, our debt is declining, our bond ratings remain strong, and we have a superb record of annual audit reports,” Shull said. “We’ve made tremendous progress on paving, our utilities are world-class, and we have the ability to expand our utilities.”

On the economic development front, Shull said Kingsport is negotiating the development terms for the remainder of Brickyard Park, a move that would add 300 housing units and greenspace to that property.

Move to Kingsport efforts continue to pay off, and Domtar and Eastman are less than two years away from opening new product lines, the mayor added.

When it comes to communication, Shull touted his weekly email update (which roughly 5,000 people see), a citizens’ survey currently in progress, and a new phone app to receive information and feedback from city residents and visitors.

“We are dealing with externalities ... things going on in the world we have little to no control over: the pandemic, supply chain issues, inflation, and ideological tumult,” Shull said. “All in all, though, I think you can tell I’m pretty upbeat about the things that we can control.

“Some of the happiest people I meet are folks who have moved to Kingsport in the last four to five years. They’re so glad to leave their previous home and join us.”

In his third State of the City address since being elevated to his current position, McCartt went into more detail about the previous year’s accomplishments, the financial state of the city, and some of the noteworthy projects coming in 2022.

“It’s been an interesting 18 months ... difficult and challenging and I appreciate the resiliency of our staff and of our community partners,” McCartt said. “I hope you walk away today feeling really motivated and positive about the path your city is on and some of the positives we have before us.”

Some of McCartt’s proudest moments of the past year include:

• City Hall renovation: The $8.8 million project came to fruition earlier this year, consolidating employees from six locations into one. It received the Tennessee Public Works Project of the Year award and “really demonstrates a lot of hard work by a lot of folks.”

• Miracle Field: Though the new facility opened in the summer of 2020, the project received the Project of the Year award from the American Public Works Association.

• Bays Mountain Park: The park has celebrated its 50th anniversary throughout 2021 with a variety of special events, promotions and partnerships.

“I couldn’t think of a better time to celebrate the park,” McCartt said. “We needed this. We needed something to rally around, and what better way than with one of the crown jewels in the city?”

On the financial front, Kingsport saw a 10% gain in sales tax collections during the past year, allocated $5.8 million to one-time capital projects and ended up with just over $20 million in its rainy day fund.

A majority of the sales tax growth was due to online purchases and stimulus funds, McCartt said.

Kingsport saw its bond ratings of Aa2 and AA reaffirmed by Moody’s and S&P respectively, with the agencies giving the city a positive outlook for the future.

McCartt said the city is managing its debt well and rolling off more than what’s being added.

“This should leave you with the impression the city’s financial health is very sound, we’re making the right decisions, and we’re very strategic with our investments in order to manage growth,” McCartt said.

Growth also took the form of people and houses during 2021 with Kingsport having 2,200 new homes being built or in development.

Since the pandemic began, Kingsport has seen more than 1,200 families move to town, coming from 49 states, Washington, D.C., and Puerto Rico.

McCartt wrapped up his presentation by mentioning some of the projects on tap for next year.

• Brickyard Park: Kingsport has built four ball fields and the Miracle Field on the property, with plans for additions, such as open greenspace, a relocated skate park and a new mountain bike course. “We’re reopening Cement Hill and we’ve negotiated with a company that’s going to build over 300 residential units on this site next spring,” McCartt said.

• Amphitheater at Bays Mountain Park: In a partnership with Eastman, the city plans to build a new amphitheater beginning next spring. The structure will open up many opportunities for new programming.

• Main Street: For years, Kingsport has planned to address the problem with Main Street and completely rebuild the road. This project, funded 80% by the state, will hopefully go out to bid next spring, McCartt said.