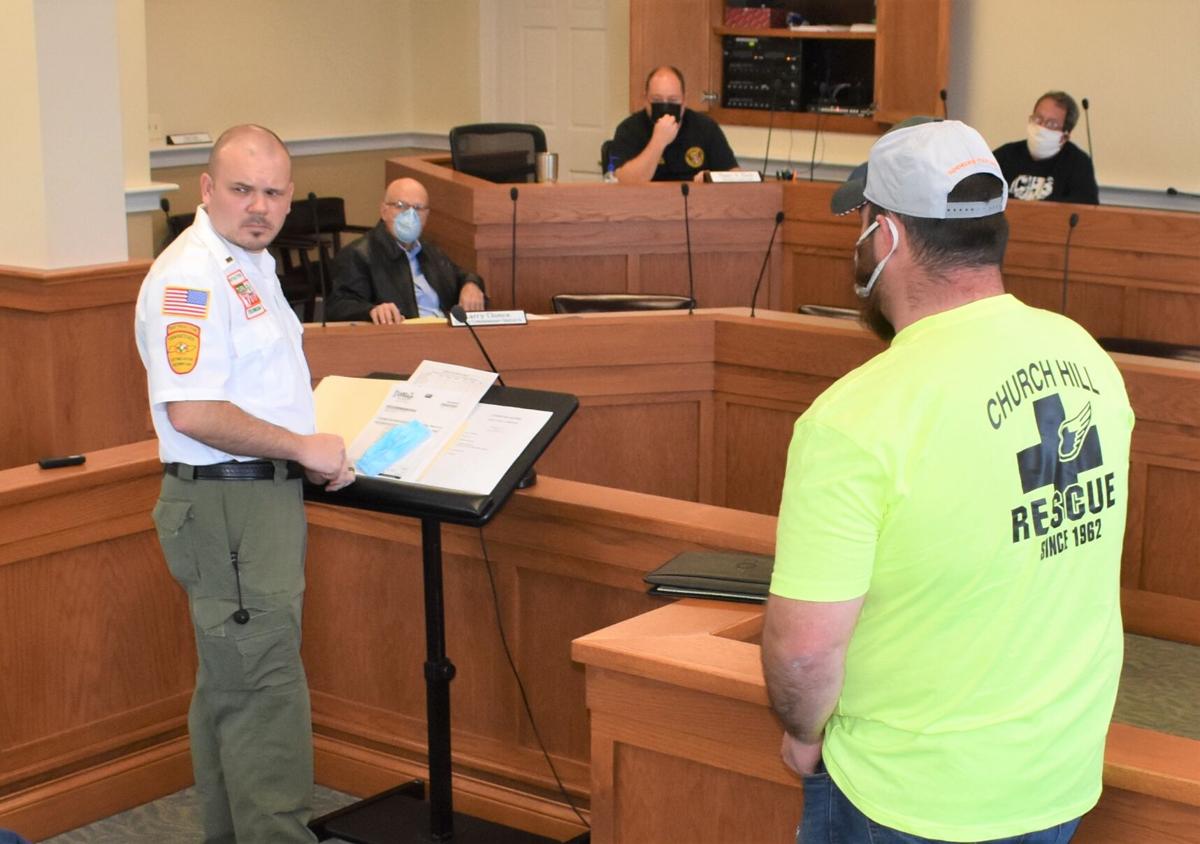 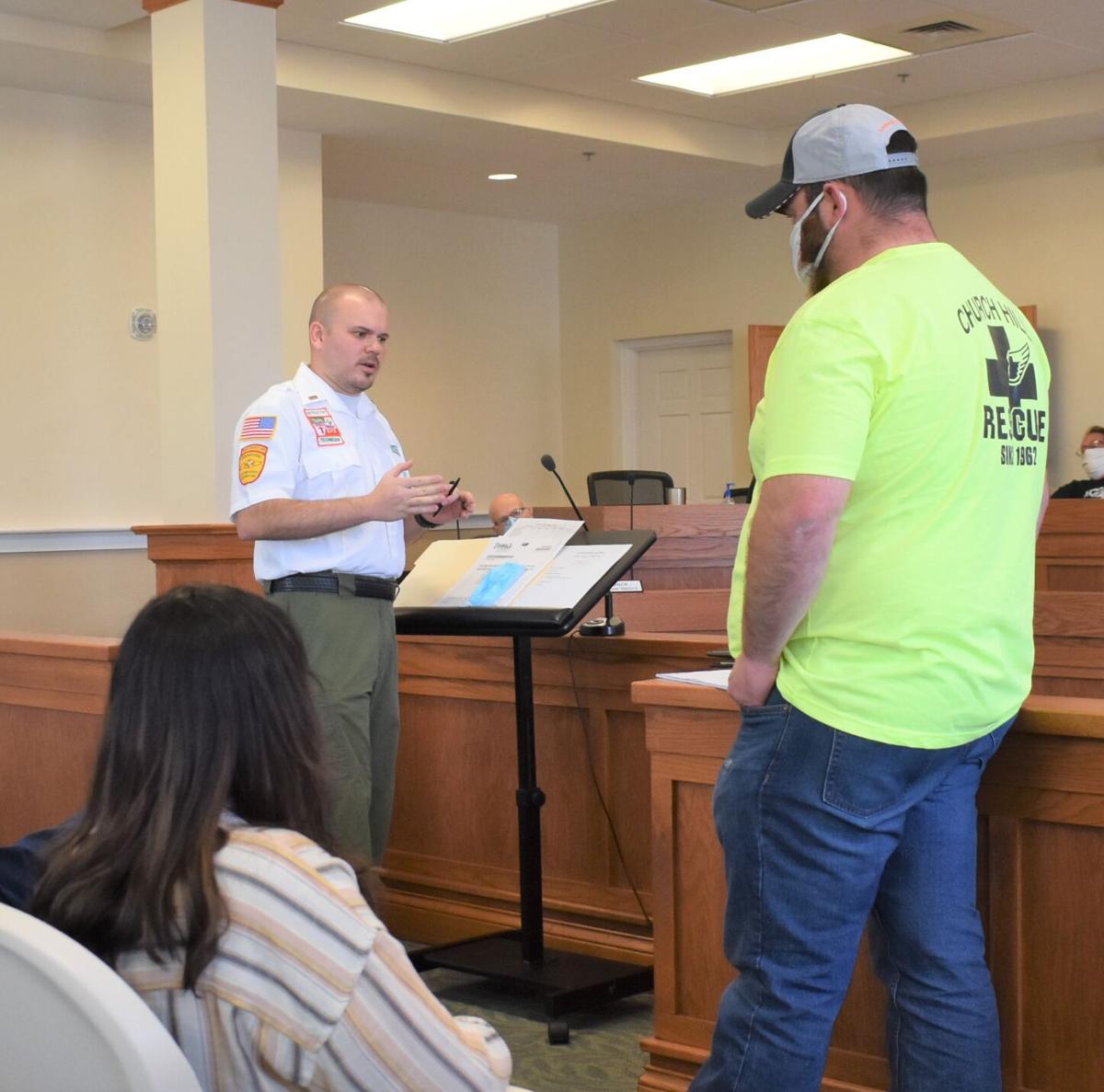 ROGERSVILLE — If Hawkins County’s two volunteer rescue squads refuse to sign their radio frequencies over to the county, they face the possibility of being excluded from the impending emergency radio system replacement project.

That would leave the Hawkins County Rescue Squad (HCRS) and Church Hill Rescue Squad (CHRS) on the county’s current 15-year-old radio equipment, which is failing.

In October, Hawkins County was awarded a $250,000 emergency grant to help cover the projected $425,000 cost of replacing its failing emergency radio system.

Mayor Jim lee recently notified HCRS and CHRS that they would be required to sign over their emergency radio frequencies to the county in order to receive new equipment that will be purchased with grant funds.

Miller told the committee that the county’s grant writer, Evan Sanders, had indicated that because the emergency radio grant was awarded to the county, the county must own all radio frequencies for which grant funding will be expended for equipment and maintenance.

Failure to comply with that request would result in both rescue squads being omitted from the new county emergency radio system.

The HCRS and CHRS are both nonprofit 100% volunteer agencies that operate on grants, fundraising efforts and contributions. Rescue squad volunteers respond to a variety of emergencies, although they are most often called upon to provide extrication during auto accidents.

The rescue squads are sometimes confused with Hawkins County EMS, which is Hawkins County’s ground ambulance transport agency staffed by paid employees. But, those are completely different types of agency.

HCRS Lt. Corey Young and CHRS Capt. Tim Coup each told the Public Safety Committee on Thursday both rescue squads are willing to lease their frequencies to the county for as long as the county wants at no cost.

But they aren’t willing to give up ownership of their frequencies outright. Both agencies own four frequencies each, which create to two channels each.

“Our concern is, if a future mayor or administration decided to remove us from the emergency radio system for whatever reason, we wouldn’t have any frequencies to fall back on,” Young said. “The reason the county needs our frequencies is there aren’t any available, so there wouldn’t be any for us either.”

Young told the committee he contacted Lee asking for documentation to prove that county ownership of the HCRS frequencies was a requirement of the county grant. Young said that proof wasn’t provided and he was told by Lee that the county isn’t required by law to provide rescue squad service.

Now the Public Safety Committee will be asking for that proof.

On Thursday, the committee voted to seek legal advice from County Attorney Jim Phillips, as well as written proof that a lease of the rescue squads’ radio frequencies won’t satisfy the requirements of the grant.

Miller told the committee that in the meantime he has been directed by Lee to push forward with the radio replacement project.

The implication seemed to be that if the rescue squad frequencies aren’t signed over to the county by the time the project goes out for bid, the rescue squads will be excluded from the grant.

If the rescue squads don’t benefit from the grant, they’ll be left on the old system that was awarded to the county by Homeland Security in 2005. Young said he was told by Lee that the 2005 system would be left in the county’s name and the rescue squads would be required to cover maintenance costs.

Young and Coup presented the committee Thursday with their backup plan, which would involve creation of their own radio system at a cost of $102,670.

“There’s no way either of us can afford to put in a little over $50,000 each for a system,” Young told the committee. “... We would be asking the county to help us out on that.”

Young noted that the cost of the rescue squad’s new system would be deducted from the overall cost of the county’s radio project, if it came to that.

Committee Chairman Dawson Fields said he has no problem with a county lease of the frequencies. Fields said he will schedule a special called meeting once the legal question and grant requirement documentation are available.

Hawkins County Emergency Response Team (Hazmat) Chief Tony Robinson issued a letter to Hawkins County commissioners on Saturday stating that the agency will likely be shutting down in February if funding approved by the County Commission in August isn’t paid by January.