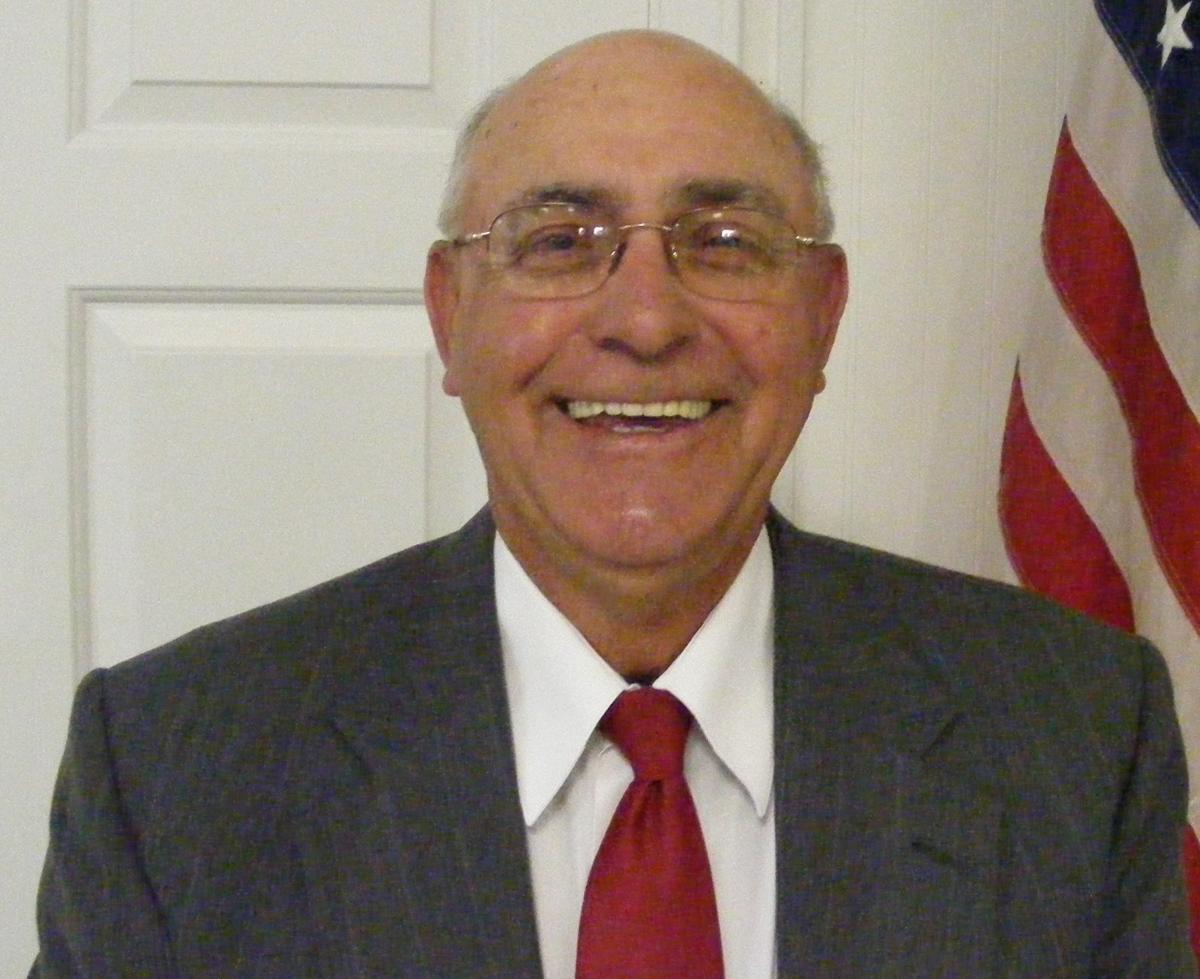 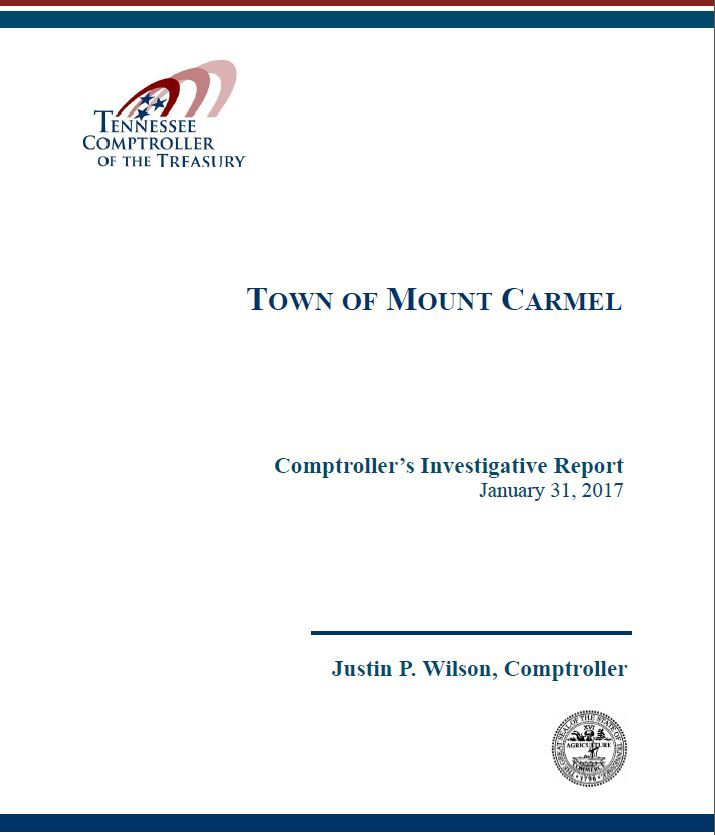 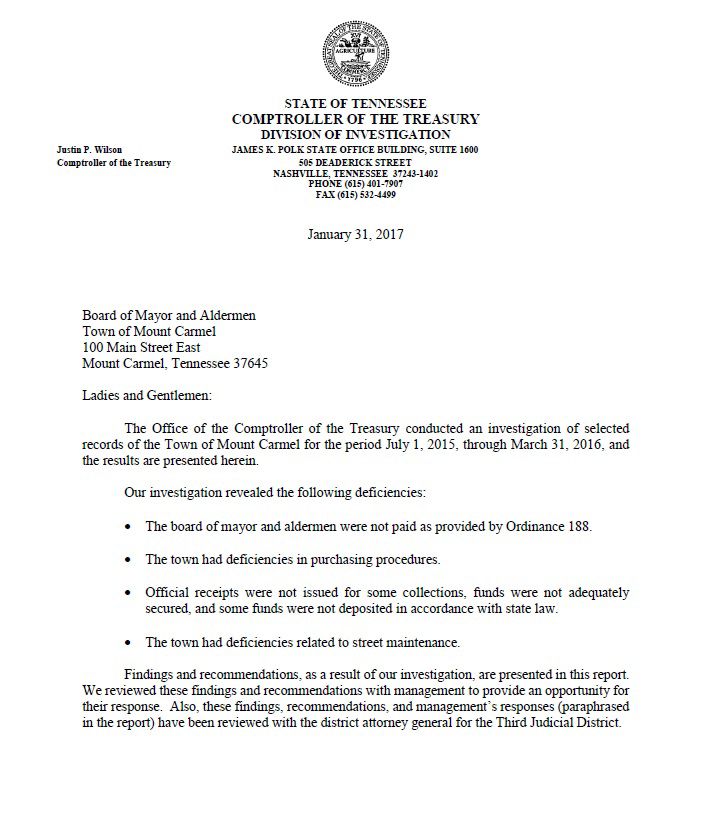 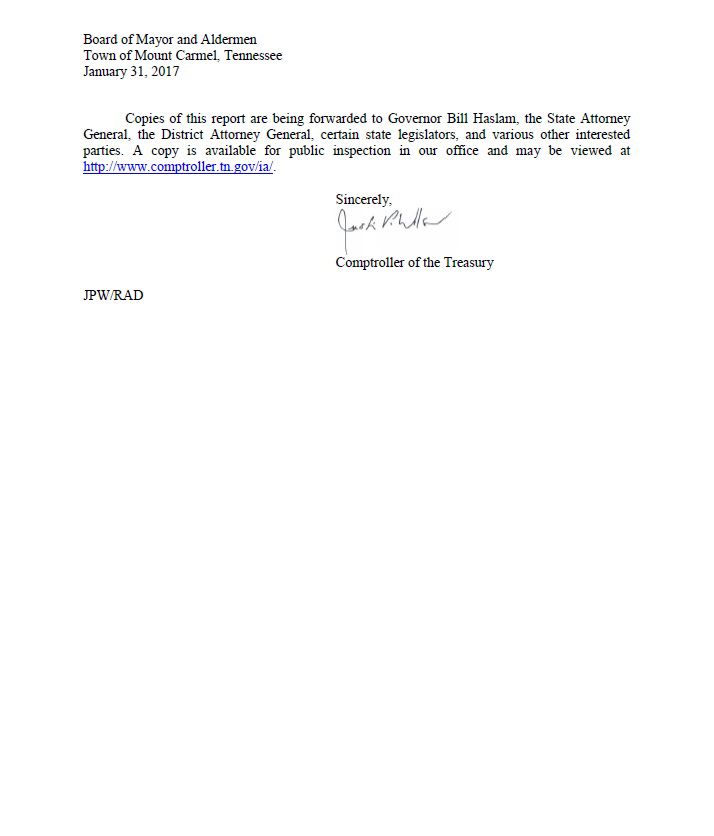 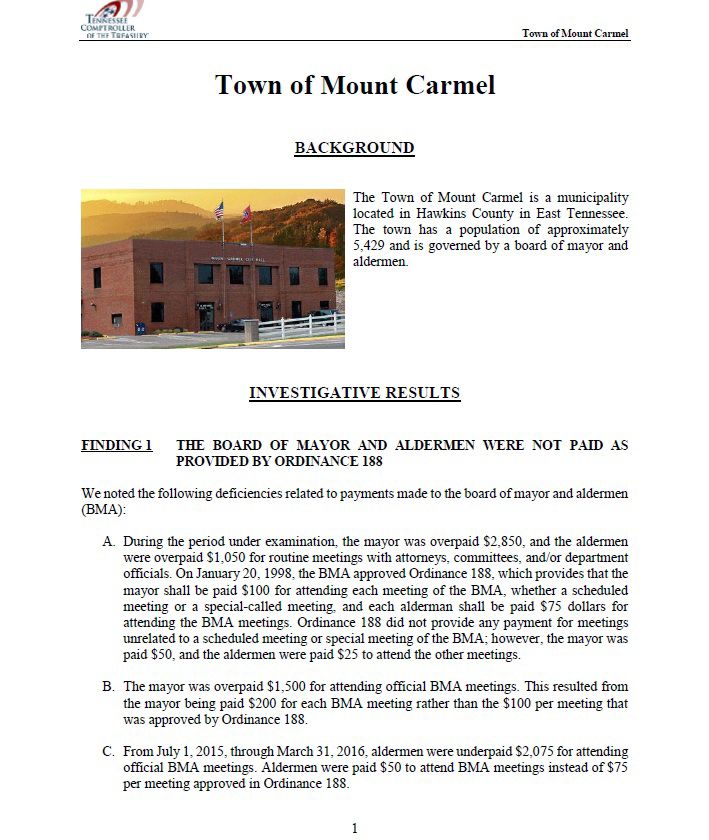 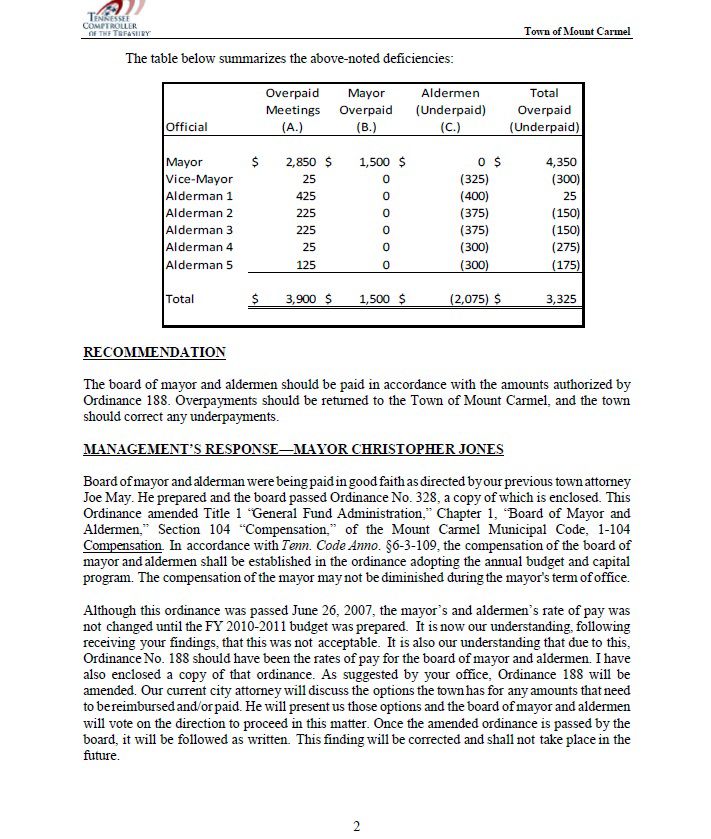 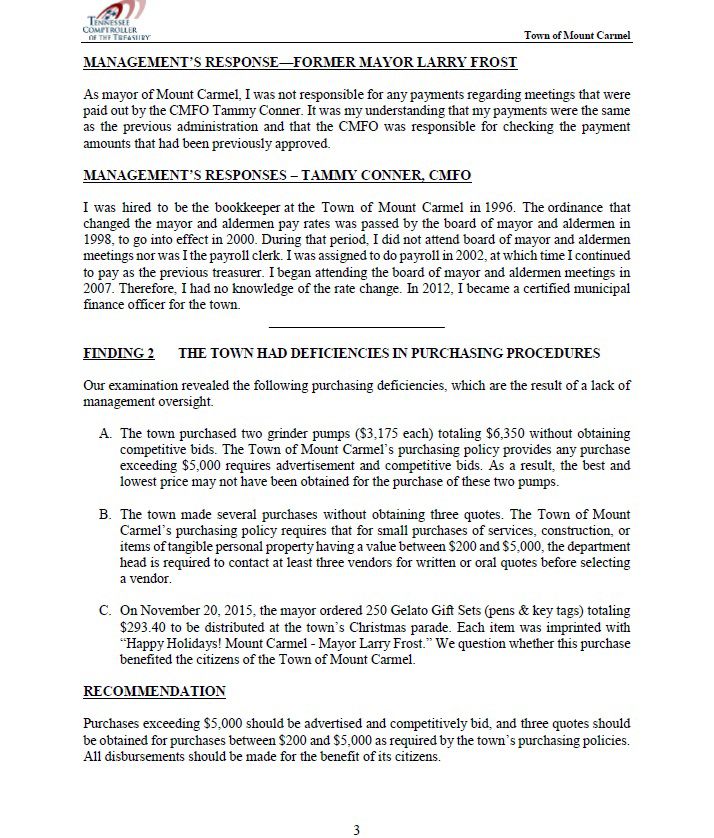 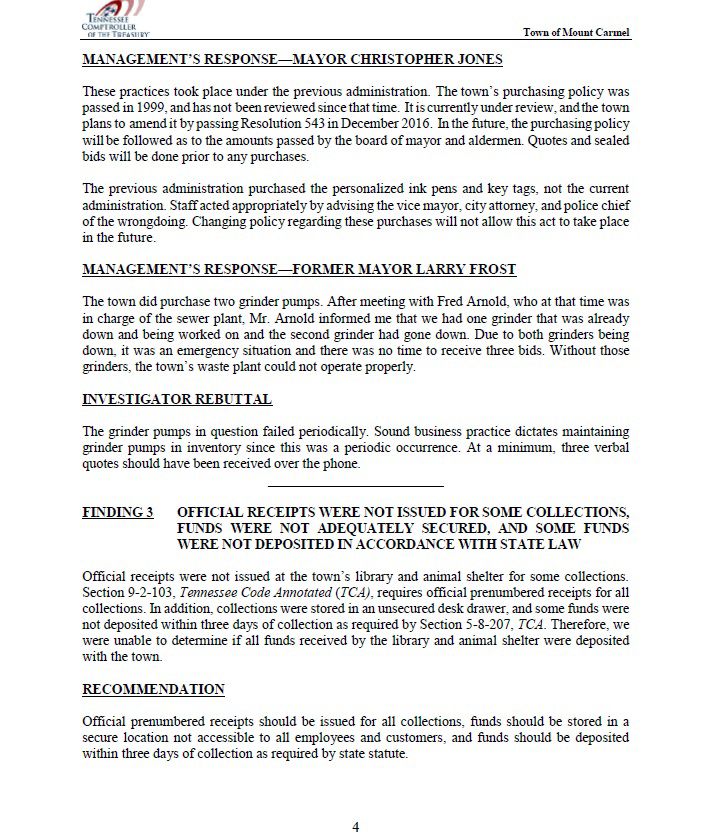 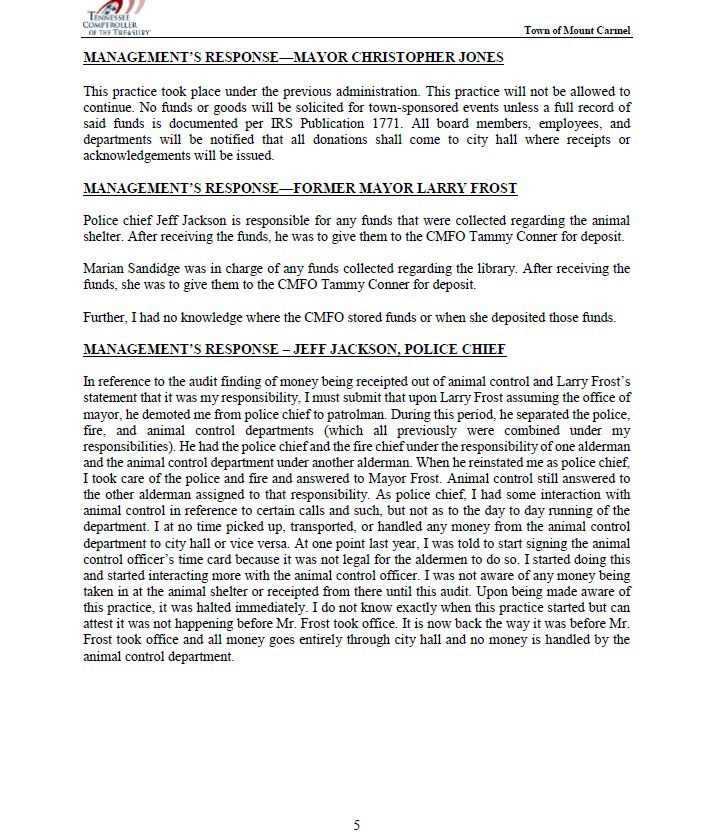 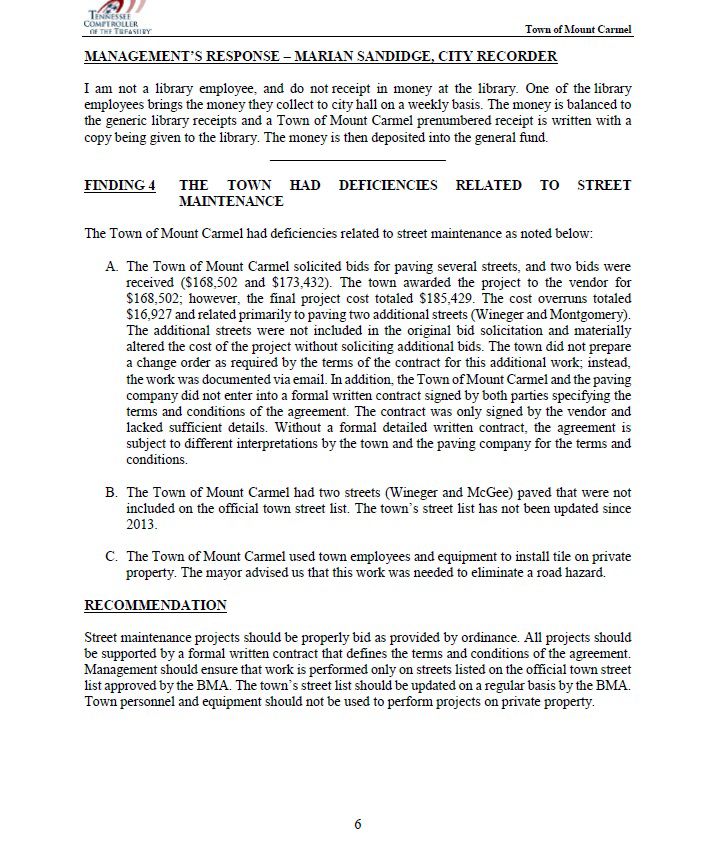 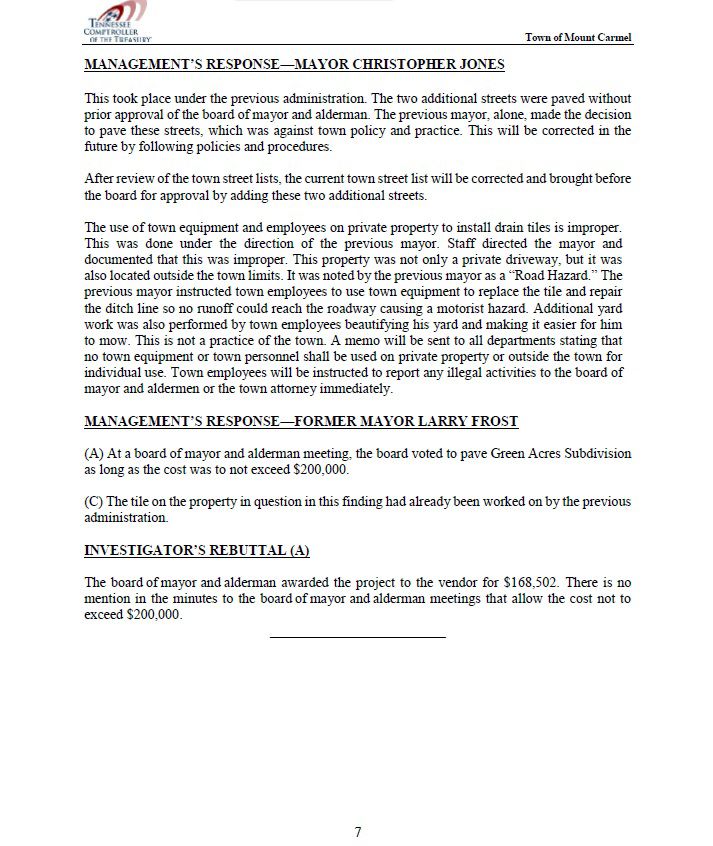 MOUNT CARMEL — From July 1, 2015, through March 31, 2016, former Mount Carmel Mayor Larry Frost was overpaid $4,350, he authorized $16,927 worth of paving without board approval and he ordered the installation of a tile on private property, according to a state comptroller’s report released Tuesday.

Tennessee Comptroller Justin Wilson stated in the report  that he has reviewed the findings with Third Judicial District Attorney General Dan Armstrong.

Armstrong told the Times-News on Tuesday he will decide within the next month if the comptroller’s findings merit further action by his office or presentation to the Hawkins County grand jury.

“I’ve had some other things going on so I haven’t made a final determination, but I’m in the process of reviewing it to determine if there would be any action or not,” Armstrong said. “Right now, I’ve got a murder case set in a couple of weeks in Morristown, so probably by the end of February I’ll make a determination on the comptroller’s report. I think there’s a lot of things there to consider. I don’t know that they would rise to criminality, but I’m not foreclosing that.”

Frost was defeated by current Mount Carmel Mayor Chris Jones in the November election. All findings in this report pertain to the Frost administration, and Jones said the issues have been corrected where possible.

The comptroller’s report indicates that Frost received $2,850 between July 1, 2015, through March 31, 2016, for attending meetings that the city ordinance doesn’t authorize pay, such as meetings with department heads, members of the public and even the media. He was paid to preside over the veterans memorial dedication at the City Park.

According to city records, Frost submitted a “time sheet” to payroll listing the “meetings” he should be paid for.

Frost was also overpaid an additional $1,500 for receiving $200 per BMA meeting, according to the report.

Although the mayor was overpaid, during that same time period aldermen were underpaid a total of $2,075 for attending official BMA meetings. Aldermen were paid $50 to attend BMA meetings instead of $75 per meeting as required by ordinance.

In his response to this finding, Frost told the comptroller’s office, “It was my understanding that my payments were the same as the previous administration and that the CMFO was responsible for checking the payment amounts that had been previously approved.”

The comptroller’s office recommended that overpayments should be returned to the city by Frost, and the city should correct any underpayments.

Another negative finding in the comptroller’s report accuses Frost of increasing the cost of a paving project without the BMA’s authority.

Mount Carmel solicited bids for paving several streets, and the town awarded the project to the vendor for $168,502.

The additional streets were not included in the original bid, and the city didn’t prepare a change order as required by the terms of the contract for this additional work. Instead, the work was documented via email.

The town of Mount Carmel and the paving company also did not enter into a formal written contract signed by both parties specifying the terms and conditions of the agreement. The comptroller’s report states the contract was only signed by the vendor and lacked sufficient details.

Frost told the comptroller’s investigator that the BMA voted to pave Green Acres Subdivision as long as the cost was to not exceed $200,000.

The comptroller’s report rebutted Frost’s explanation, however, stating there is no mention in BMA minutes that allow the cost not to exceed $200,000.

The comptroller also notes that the two added streets, Wineger and McGee, were not included on the official town street list. Prior to action taken by the BMA last week, Mount Carmel’s street list hadn’t been updated since 2013.

In another finding, the comptroller reports that Mount Carmel used town employees and equipment to install tile on private property. Frost stated that this work was needed to eliminate a road hazard.

That project was also cited in the city’s most recent audit that states Frost authorized the use of town employees and equipment to install a drainage tile on private property at 5725 Carters Valley Road, which is outside the city limits.

The cost of the project was in excess of $3,500, and that project wasn’t covered by town insurance, the audit states.

“Using public resources for work on private property is in violation of the Tennessee Constitution and could have cost the town an undetermined amount of money in the event of an accident or damage to the equipment being used at that time,” the audit states.

The comptroller investigation also revealed purchasing deficiencies, which it claims were the result of a lack of management oversight.

Frost told the comptroller’s investigator, “After meeting with Fred Arnold, who at that time was in charge of the sewer plant, Mr. Arnold informed me that we had one grinder that was already down and being worked on and the second grinder had gone down. Due to both grinders being down, it was an emergency situation and there was no time to receive three bids. Without those grinders, the town’s waste plant could not operate properly.”

The comptroller investigator replied, “The grinder pumps in question failed periodically. Sound business practice dictates maintaining grinder pumps in inventory since this was a periodic occurrence. At a minimum, three verbal quotes should have been received over the phone.”

Mount Carmel also made several purchases without obtaining three quotes. Mount Carmel’s purchasing policy requires that for small purchases of services, construction, or items of tangible personal property having a value between $200 and $5,000, the department head is required to contact at least three vendors for written or oral quotes before selecting a vendor.

The comptroller report states, “We question whether this purchase benefited the citizens of the Town of Mount Carmel.”

Mount Carmel praised for clean audit with no negative findings

The Board of Mayor and Aldermen was presented a clean audit for the 2018-19 fiscal year last week with zero negative findings.