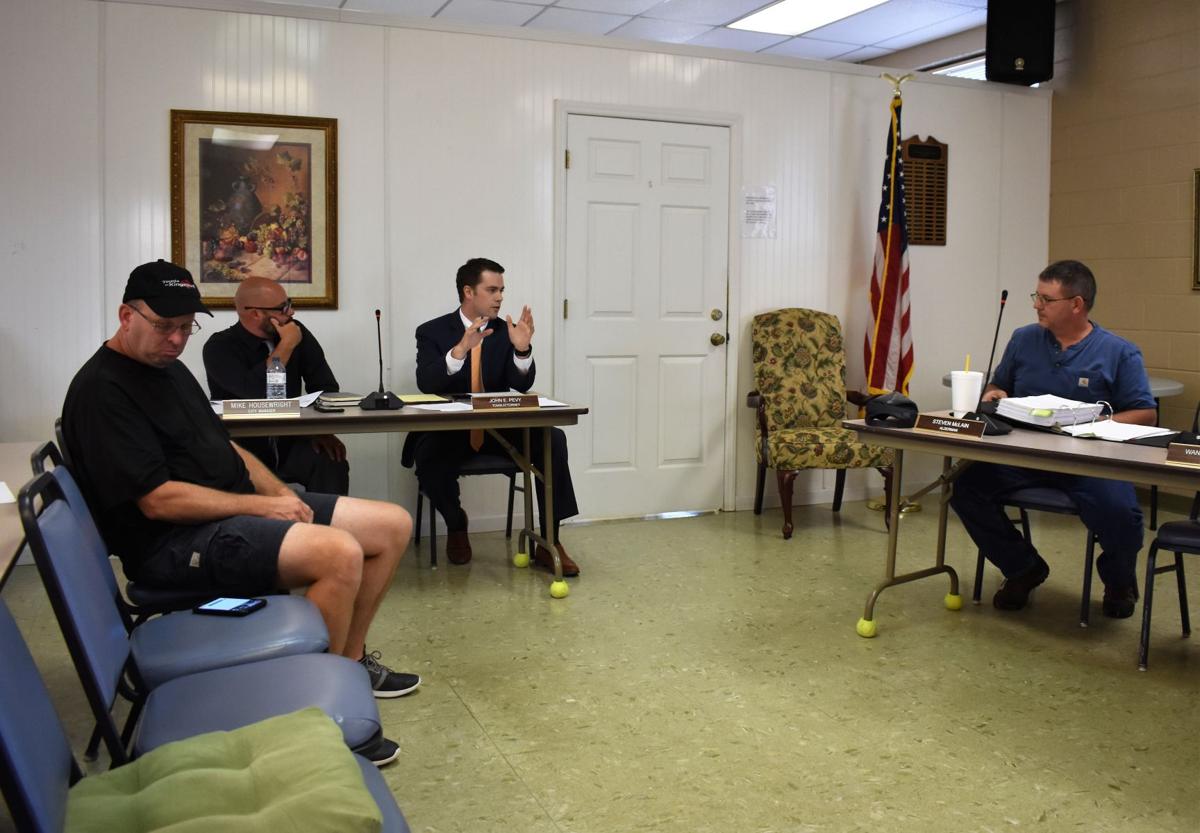 Mount Carmel City Attorney John Pevy, center, explains to Alderman Steven McLain, right, why his motion to eliminate the position of city administrator Mike Housewright, second from left, was out-of-order. McLain asked for the issue to be placed on the agenda for next month's BMA meeting. 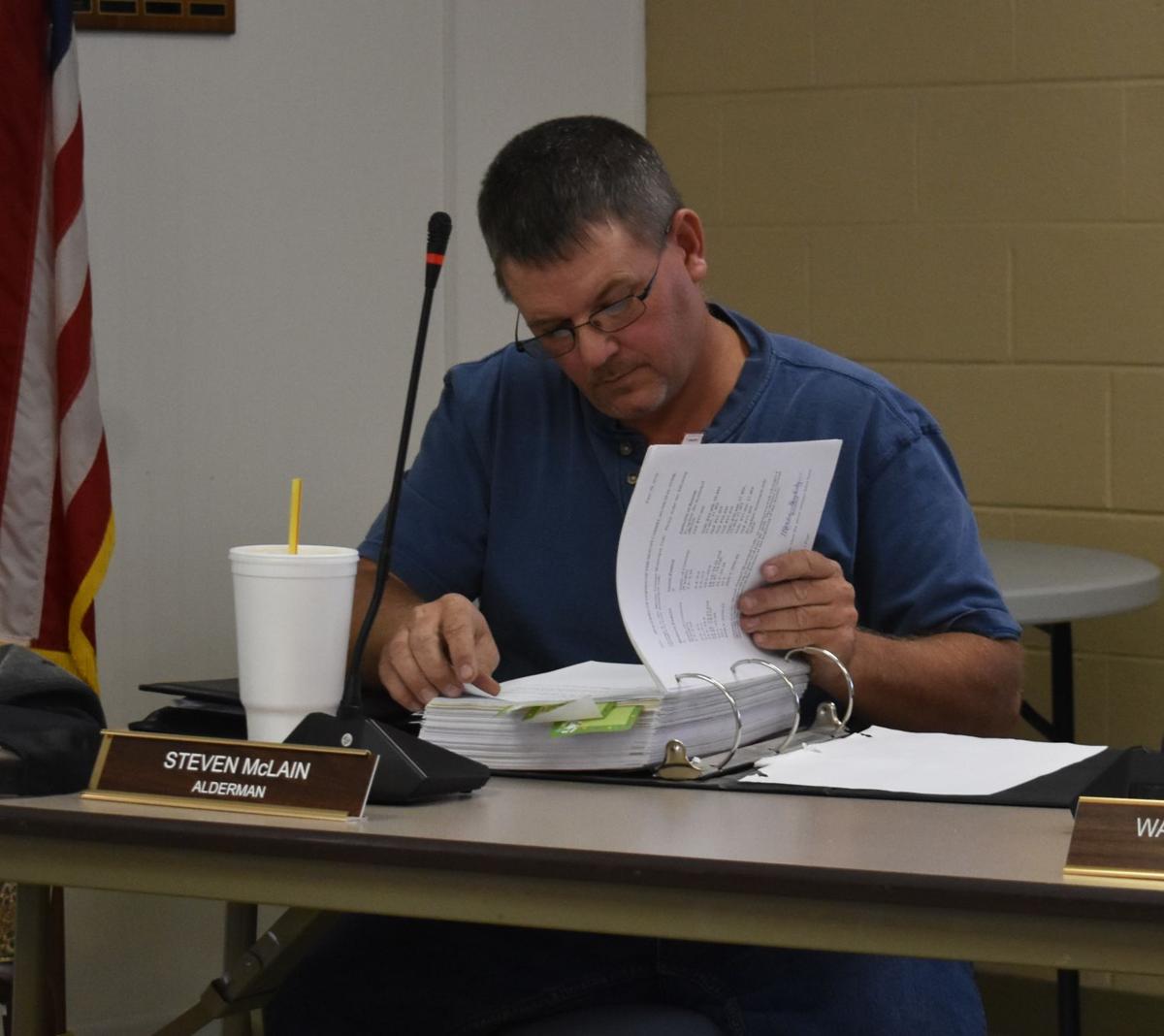 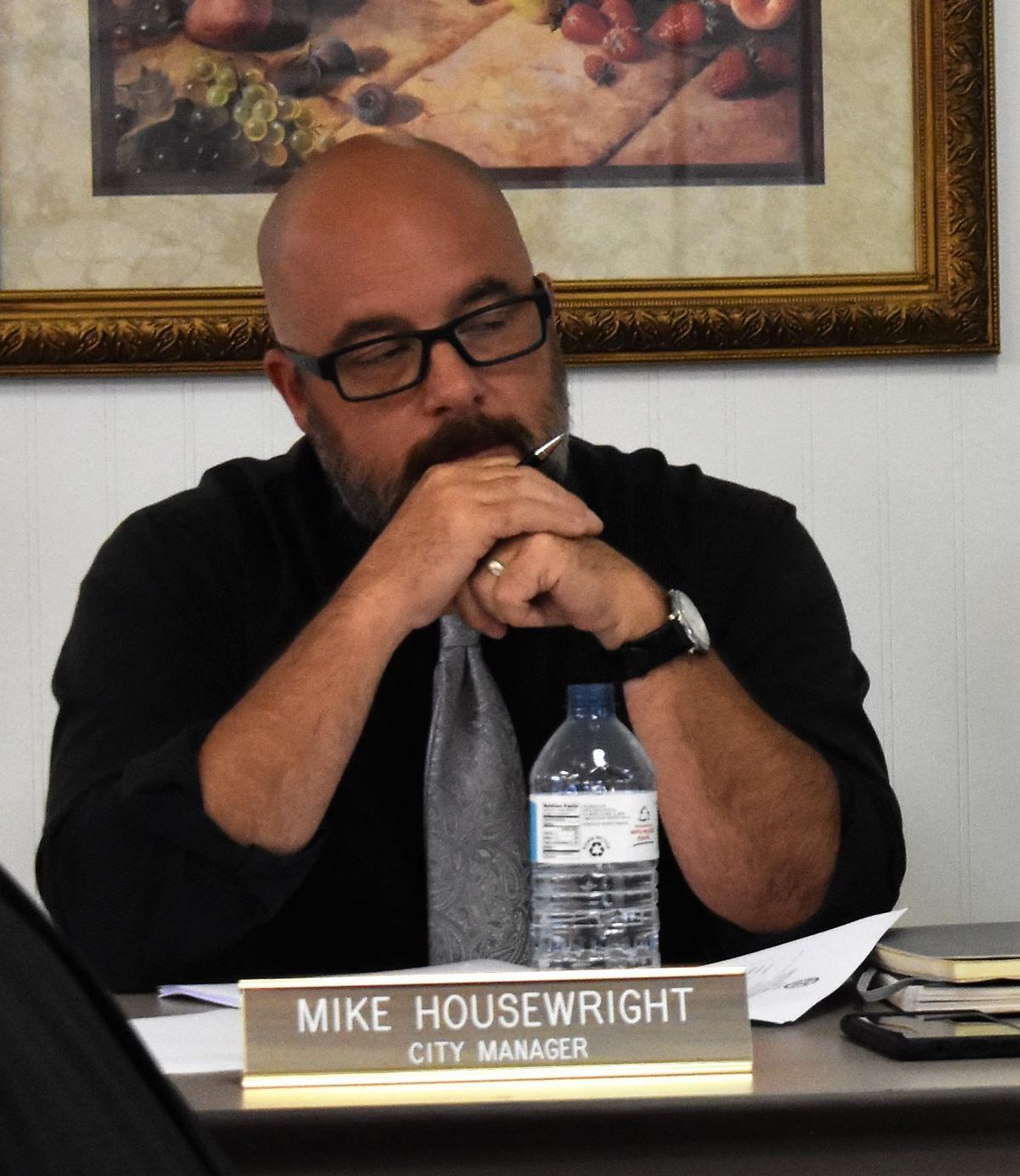 Mike Housewright listens as Alderman Steven McLain argues to eliminate his position, and basically fire him.

Mount Carmel City Attorney John Pevy, center, explains to Alderman Steven McLain, right, why his motion to eliminate the position of city administrator Mike Housewright, second from left, was out-of-order. McLain asked for the issue to be placed on the agenda for next month's BMA meeting.

Mike Housewright listens as Alderman Steven McLain argues to eliminate his position, and basically fire him.

MOUNT CARMEL — Alderman Steven McLain’s attempt Thursday to fire City Administrator Mike Housewright was delayed a month because it wasn’t on on the agenda and will require an ordinance and public notice.

During the alderman comments at the end of Thursday’s Board of Mayor and Aldermen meeting, McLain made a motion to eliminate the city manager position and return the town to the form of government where the day-to-day operations are governed by the board as a whole.

Mayor Chris Jones made a similar motion in April 2018. That motion was defeated by a vote of 2-2.

On Thursday, however, it was Jones who came to Housewright’s defense, telling the Times News after the meeting that if Mount Carmel is going to grow and move forward, it needs Housewright’s expertise.

McLain lays out his case

McLain said he believes the town isn’t following its charter with regard to appointment of department heads by voting to confirm Housewright’s decisions.

Housewright recently appointed a new fire chief to replace Austin Simpson, who was given the option of resigning or being fired.

Housewright told the Times News the circumstances of that ultimatum are a personnel matter which isn’t public record.

That was one of several points of contention for McLain, who said Thursday he wasn’t given any other information about Simpson’s departure.

“A lot of people aren’t happy with the city administrator, and I’m one of them,” McLain said. “I found out Friday after the Block Party some of the clerks were sent home. This is their busiest time of the year. They’re over three weeks behind, and you sent them home with pay. I don’t agree with the mess that’s made down here in the courtroom. That’s inexperience. Someone trying to do something that they don’t know what they’re doing.”

He also said that, to his knowledge, no one who has made comments during citizen comments has received a response from Housewright, McLain’s wife included. McLain also didn’t like being notified by text message of the recent fire truck accident on Big Elm Road.

City Attorney John Pevy informed McLain that his motion to eliminate the city administrator position and return power to the BMA wasn’t legal because it wasn’t on the agenda and hadn’t been advertised in accordance with the Tennessee Open Meetings Act.

“Let’s put it on the agenda for next month,” McLain replied. He also said to Housewright, “I think you’re doing a poor job.”

McLain, who was elected alderman last November, knows what it’s like to have his job eliminated.

He is a former city employee who was hired by his father-in-law, former Mayor Larry Frost. Following the election of Jones as mayor in 2016, McLain’s position was eliminated from the next fiscal year budget.

“Anyone who has served as mayor in a small town like this can tell you it’s not small anymore,” Jones told the Times News after Thursday’s meeting. “We’ve got so many things taking place, and so many situations where a city administrator is trained and knows what’s going on. We don’t know who the next mayor is going to be (in 2020), so we need someone with experience behind them who is going to be able to market the town and bring in business and people.”

Jones added, “He acts as a buffer between the board and our city employees, and that’s important. It is such a busy position, it is impossible to dot every ‘I’ and cross every ‘T’ fast enough to make everyone happy. … The town doesn’t have a choice. If we want to pull out of the rut that we’re in, we need a city administrator.”

The Times News asked Housewright to respond to McLain’s motion, which he did by email Friday.

“From the beginning, I knew Mount Carmel faced a great many challenges and this would be a tough job. The transition to City Management from Strong Mayor is always a difficult and delicate one. Given the scope of these challenges, it comes as no surprise to me that my role as City Manager is again in question. I will only say that my every decision has been based solely on the best interest of the city. It has been, and will continue to be, a slow process to bring the city where it needs to be. I feel much progress has been made and I am proud of the work we have done. I have an enormous amount of respect for the people of this community and am confident they will find their way to where they need to be regardless of whether I am part of the team.”

Mount Carmel's mayoral and alderman candidates in the Nov. 3 municipal election have been invited to participate in a virtual community meet and greet that will be live-streamed from City Hall on two separate days next week.