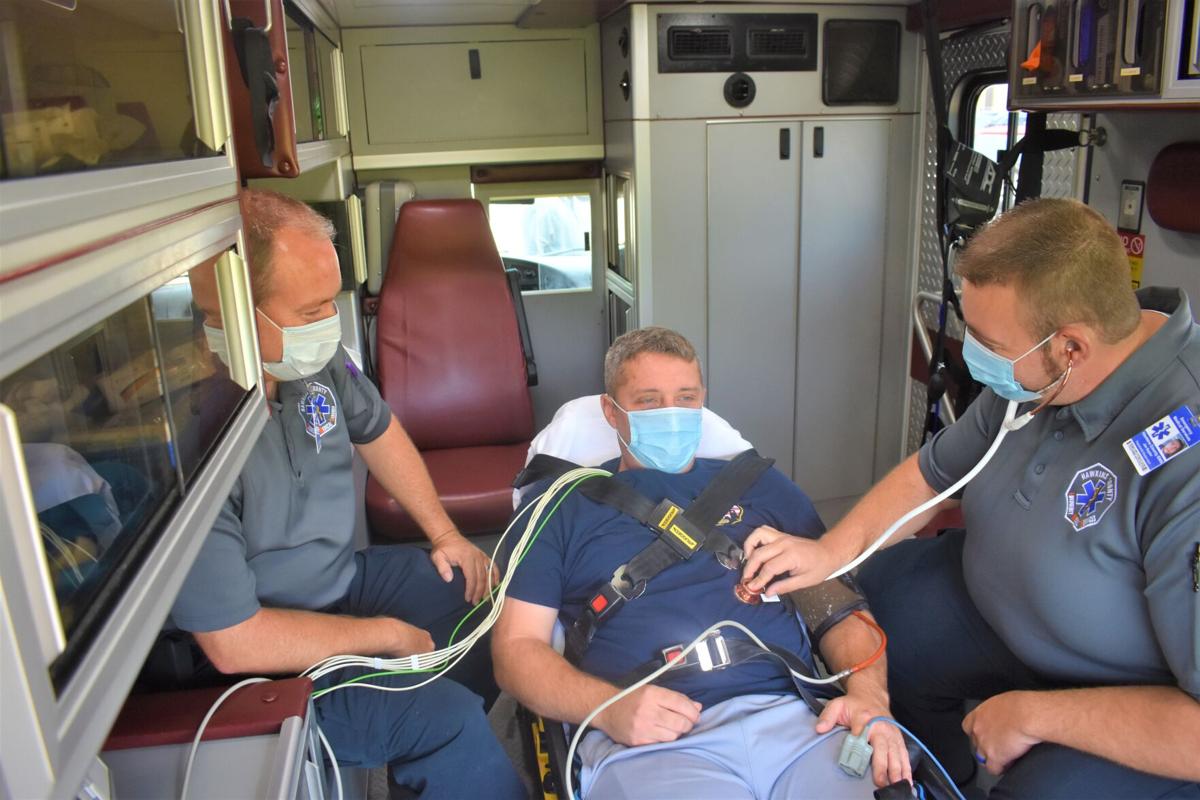 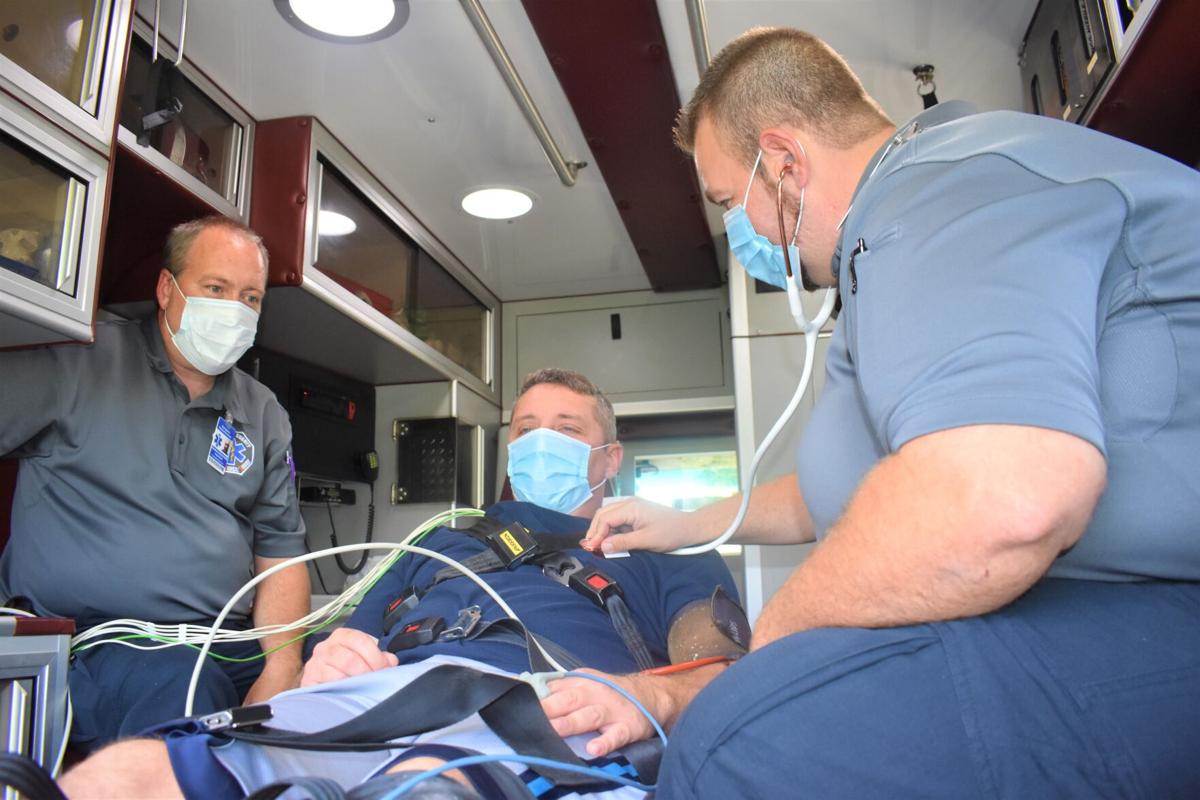 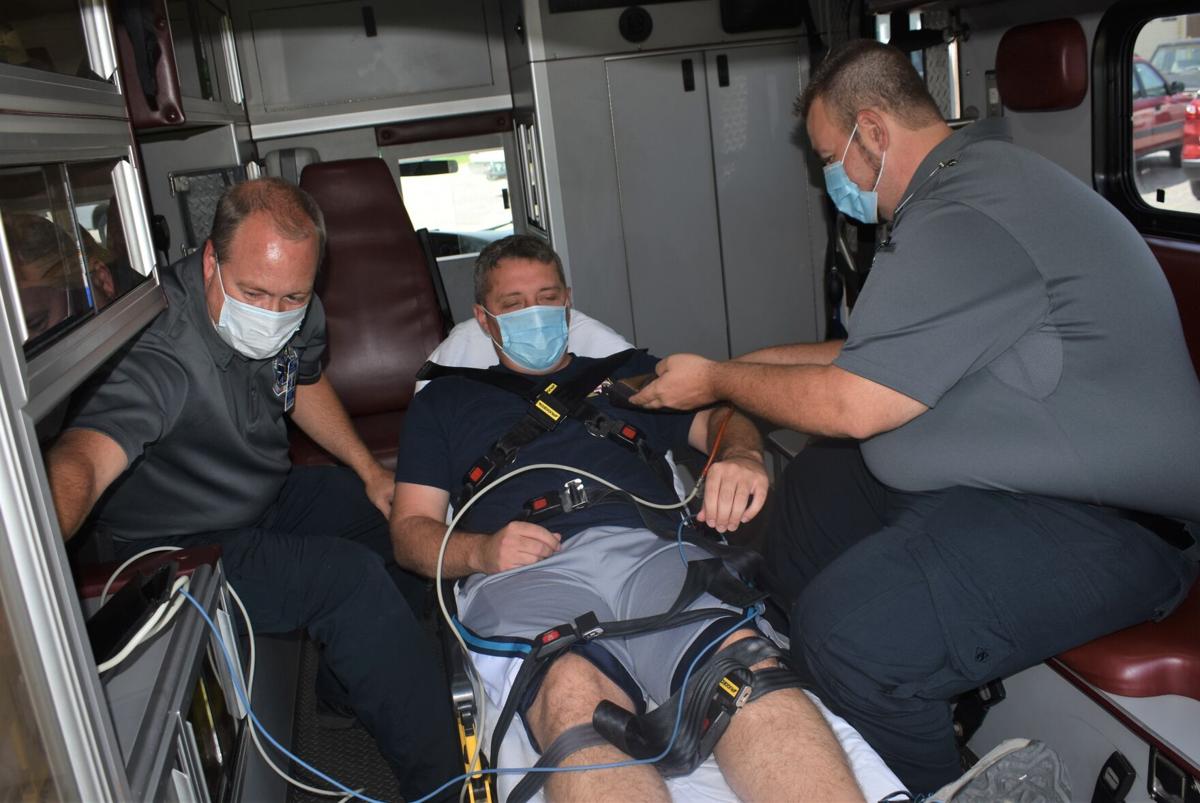 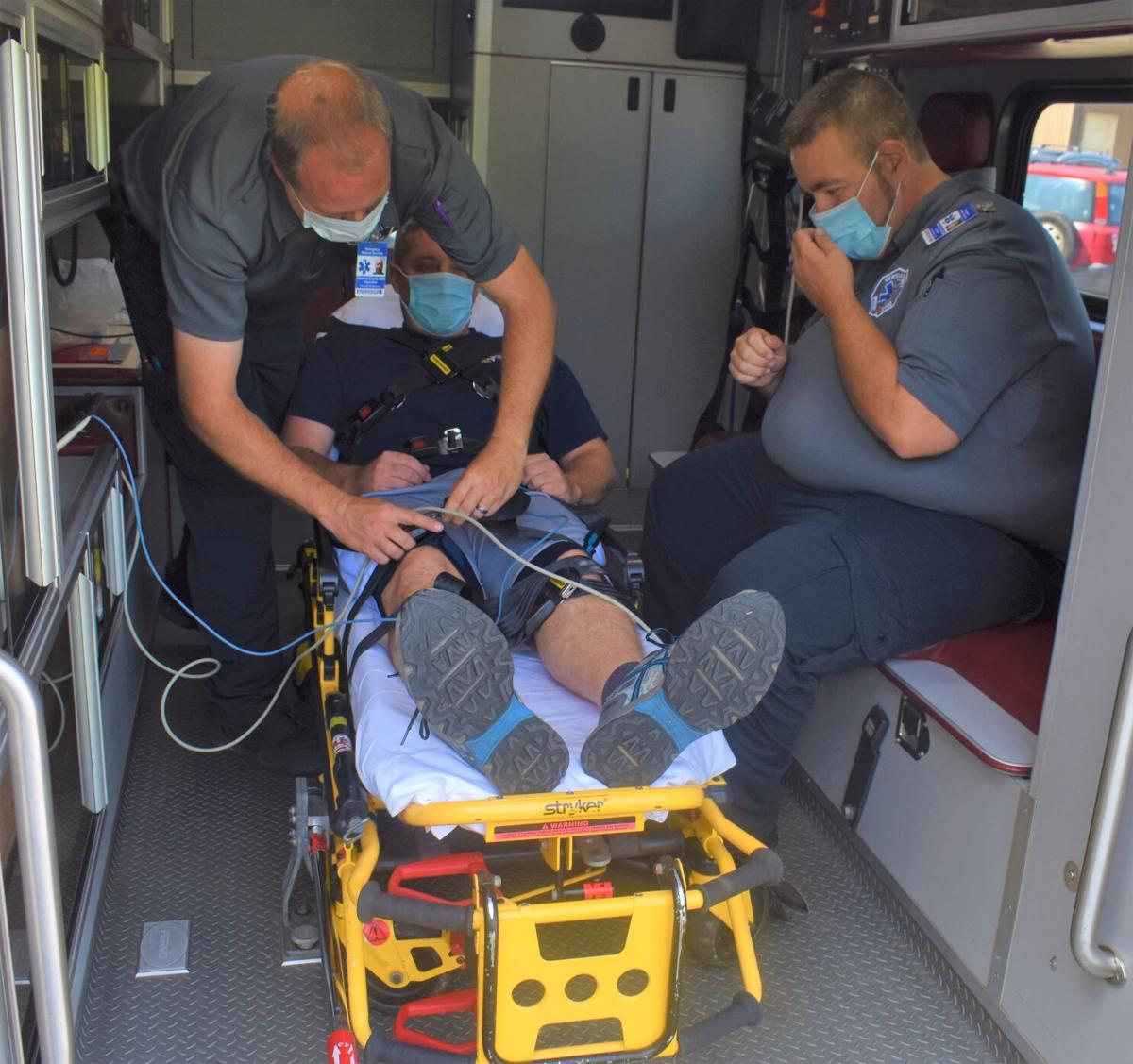 ROGERSVILLE — If you never have an opportunity to meet the men and women in the ambulance business, you're a lucky person because they often arrive on what turns out to be the worst day in your life.

But, they also have the power to turn what would otherwise be your worst day into your best day by saving your life or the life of your loved ones.

When it comes to unsung heroes, emergency medical technicians and paramedics have got to be at the top of the list.

Now take what was already one of the most stressful jobs on the planet and throw in the coronavirus. When the pandemic hit in March, it made life a lot harder for everyone, especially ambulance workers.

The Times News recently sat down with several members of Hawkins County EMS to talk about what their job was like before the pandemic arrived, and how their job has changed in the COVID-19 era. Among those who participated n the discussion were EMS Director Jason Murrell, and paramedics Wayne Elam, Ryan Wilder and Jim Saylor.

Under normal circumstances Hawkins County EMS works its staff 24 on and 24 off for three shifts, and then four days off. As with any ambulance agency in Tennessee, staffing shortages have been an ongoing problem for Hawkins County EMS.

KTN: What were some of your biggest struggles prior to the arrival of the pandemic?

Jason Murrell: There's fewer and fewer people wanting to get into this field. It's very competitive between services on who can get that employee to come to their service to work.

Another struggle is there's a lot of politics involved in anything to do with emergency services. Recently the county has been able to support us a little better than what they had been, which obviously we're very appreciative of. But, prior to the pandemic our biggest struggle was staffing issues.

Jim Saylor: The way the healthcare system has adapted due to the coronavirus, that's increased our call volume. With the increase in call volumes, we need to run wide open a lot more. It's put a strain on all of us.

Ryan Wilder: Pay here isn't much different that anywhere else. The number of people getting into EMS as a career is dwindling. They're using it as a stepping stone to get into nursing, or med school. The career paramedics and career EMTs, you just don't see that any more.

Wayne Elam: You're constantly losing your most experienced personnel.

Jim Saylor: The insurance companies and the healthcare system does not support us as medical professionals the way we should be supported, compared to nurses and everybody else. As a nurse you can go and make two and three times the money.

KTN: Illegal drug use must keep you busy.

Ryan Wilder: Every new drug shipment that comes in, we know about it because we're the ones taking the overdoses to the hospital. Heroin now is the big one.

Jim Saylor: I've been in this 15 years, and last year was the first heroin we've dealt with. Most of the heroin now is cut with Fentanyl, and people who have been using heroin for a long time don't know that until they get it, and that's what's been causing the major overdoses I've dealt with.

KTN: Describe what it's like to respond to situations involving serious injury and death.

Jim Saylor: In our business you have to step in to a situation that for somebody else is the most chaotic time in their life, whether it be a wreck, or a family member has died, heart attack. Whatever it is, you step in at the most chaotic time in their life and you have to control the situation, be the voice of reason, keep everybody calm, cool and collected, and take care of your patients.

Wayne Elam: It's such an emotional strain. We can work a major trauma wreck, run emergency, take that patient to the hospital, and use everything in the back of the truck just to keep them alive. Then while you're at the hospital you've got to pick a patient up for a doctor's appointment. You go from one extreme to the other, back and forth through your whole shift.

Ryan Wilder: You've got to get that out of your mind fast. It's sad. We don't deal with what we've just experienced. You just push it down and move on.

Wayne Elam: You don't have time to deal with that. When you think of a normal person in society, how many times have they watched a person die. If a normal person sees two or three people who have died in their lifetime, outside of a funeral home, that's a lot. We see that on a daily basis.

Jim Saylor: Death is such a regular thing, you don't even have to process it.

KTN: Does it ever come back and bother you when you're off duty?

Ryan Wilder: Sometimes. I never had a problem with a call until after I had kids.

Wayne Elam: We just learn to deal with it so we can go on to the next one.

Ryan Wilder: If you dwell on it you won't be doing this job for long.

KTN: How did your job change in the pandemic era?

Ryan Wilder: There was a point during the (pandemic) shutdown that our call volume went down to nothing. People actually thought that they had closed the hospitals and they couldn't call us or go to the hospitals.

Jim Saylor: During a couple of weeks people wouldn't go to the hospital because they were more afraid of getting sick and dying from something they cold catch there than the medical issue they were experiencing at home.

KTN: How has the way you approach patients changed since the pandemic hit?

Wayne Elam: Our biggest thing was, at the point of having to treat patients we had to change our protocols due to the CDC changes. It's a respiratory disease, so we've had to spend more time on the scene putting on PPE (personal protective equipment). They would call us to check them for the COVID. Their doctors tell them, don't come in, but they're calling us to come check them. Check their vitals. They think we can test them.

Ryan Wilder: The CDC caused confusion in that they would put one thing out today, and by this evening they would contradict what they'd just put out on the usage of the mask, how and when and what kind of mask. Then you've got the Department of Health doing its best to keep up with the CDC. Just so much confusion.

KTN: Expand on how has life changed for the typical EMT/paramedic responding to an emergency call in the post-COVID era.

Jason Murrell: Now every call you're wearing an increase in PPE. You're at least wearing a mask on top of the gloves you usually wear. It's based off the information we get form 911 prior to getting there whether or not we have to put gowns on, or go to N-95 masks, or wear goggles.

Ryan Wilder: Most patients are considered guilty (of being COVID-positive) until proven innocent. You're a COVID patient until I feel confident enough that you're not.

Jim Saylor: In our world, you pull up on scene and mamaw or papaw are inside having a hard time breathing, and the family is going, “get in here get in here, get in here,” and we're standing outside the truck putting on our PPE to be protected. Now the patient's family is mad at you because you're taking extra time, but we don't want to take anything home to our family or anyone else.

KTN: Have you ever been concerned that you may have been exposed to COVID during a call?

Wayne Elam: You can't think about that. If you thought about it you'd never go to work.

The major thing it's done to our service is cause a delay in everything because from the time you arrive on scene you're delayed getting into the house. Then you get to the hospital, with the overload on the medical system, we were waiting 30-40 minutes with a patient anyway. Now you're double that because you're waiting for the hospital to make the room for your patient.”

Jim Saylor: There's times when when you've got a patient in the back of the truck, and there wasn't any evidence of infection, and then some of the symptoms start showing up like shortness of breath, and you check their temperature and it's 102 and they say they've had a headache for a week.

Ryan Wilder: The list of symptoms constantly grows every day, from abdominal pain to altered mental status, and we're talking about a respiratory illness.

KTN: Have you seen any type of calls increase during the COVID era?

Wayne Elam: I feel like we're having more “come check me” calls.

Jason Murrell: Our transport rate is down considerably.

Jim Saylor: They can't get into their doctor. They don't want to go to the hospital. They know that don't feel good, but they don't know how bad they feel. They just want someone to say, “your blood pressure is in normal range, or your sugar looks good. That puts a strain on us because we're not doctors.

KTN: Any other challenges that popped up over the past few months that were unexpected and you had to adapt to?

Jason Murrell: Cleaning is a lot more intense. Normally prior to the pandemic, after a call you'd wipe your stuff down, put it back up in the cabinets, put it back up in your monitor. Now you wipe down, you spray it, you leave it hanging up so it can air dry even more.

Jim Saylor: You don't normally deal with an airborne disease. Most of our infectious illnesses are blood-borne, and somebody's blood gets in the back of the truck you can clean it up and you know how to deal with it. If it's airborne, everything in the truck is contaminated every time you run a call with a COVID patient. Everything has to be cleaned, and re-cleaned after every transport.

KTN: The stress level has got to be always high in your profession, but has it increased in the pandemic era?

Jim Saylor: A lot of it is just mental exhaustion because we're just stressed by the number of calls that we're running.

Ryan Wilder: We expect to be busy and the occasional shift of “wide open 24 hours.” But now that's every day, and then add the COVID aspect and everything that goes with that. But, the most stressful thing to me is the fact that every other business, from McDonald's and Walmart on up to the sheriff's office and nurses at the hospital, have all received hazard pay during the pandemic. EMS services across the state went without hazard pay.

Jason Murrell: There's one call I went on with a crew that, when I got home I went out on my back porch and stripped down and put my clothes in a bag to take to the washer, and then I went straight in to the shower.

Wayne Elam: Another stress is, after we've dealt with this for 24 hours, we're so tired, so worn out, and then we have to go home and this virus is on our clothes, it's on our boots, and we have to worry if we're taking it home to our our spouse or our children. It affects your family so much. But we have no choice. We've got to go in.

A special committee comprised of county commissioners and emergency responders will determine where scores of new automated external defibrillators (AEDs) should be deployed after Hawkins County buys them.