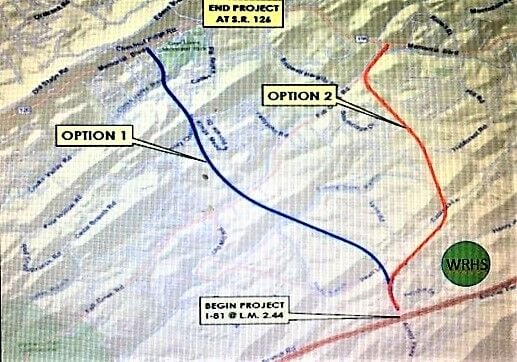 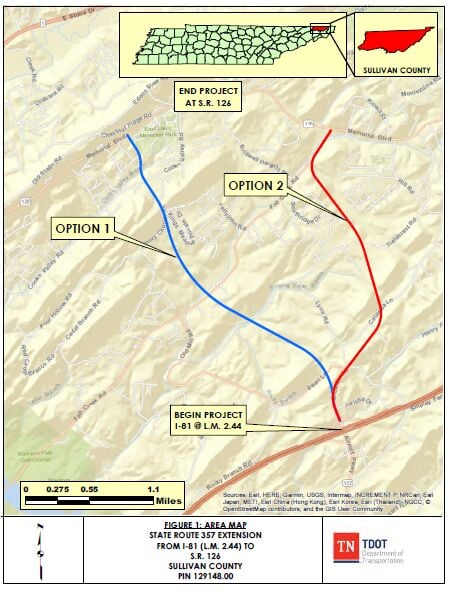 BLOUNTVILLE — The Tennessee Department of Transportation has worked up new options for building a road between Interstate 81’s Exit 63 (Airport Parkway) and Memorial Boulevard (State Route 126).

It is not the same project commonly called “Airport Parkway North” several years ago. This project would not cut through Chestnut Ridge to connect directly to Stone Drive, which helped spur public backlash against that once-hot topic.

The latest effort is considered by some as “357 lite” because it is seen as a smaller version of that project and is a reference to its official designation as State Route 357 North.

The Sullivan County Commission saw and heard a presentation on the potential new road last week.

Even if the project were approved by all parties involved, it would be an estimated eight to 11 years before the new road would be completed.

Both options traverse mostly undeveloped areas, and neither would “take” more than “a few” homes. Adjusting the actual routes could further reduce the number of homes in question.

Those cost estimates, from TDOT, are “probably worst-case cost.”

The “eastern” option would “follow ridges toward Indian Springs” and intersect with State Route 126 near Fall Creek Road.

The “western” option would connect with State Route 126 near East Lawn Cemetery, and it was described as a perfect fit because it would connect to 126/Memorial Boulevard near already-planned improvements to that roadway. Right-of-way acquisition is underway and construction is expected to begin with two years on a long-term long-planned improvement on 126/Memorial Boulevard. The “western” option would feed into what will be an improved three- to four-lane section of the roadway, providing a more direct link, via Highway 93/John B. Dennis Bypass to Stone Drive, Bloomingdale, and Wadlow Gap Road to Southwest Virginia.

In addition to improving access to the new high school, the road would provide a more direct “north/south” link to Tri Cities Airport and Northeast State’s main campus. It would also likely spur commercial development near Exit 63 and possibly on 126/Memorial Boulevard, according to the presentation, and it would likely decrease traffic on 126 between Fall Creek Road and Interstate 81’s Exit 66.

The Sullivan County Commission heard and saw the presentation at its monthly work session and no action was taken. In fact, no resolution has been presented.

The proposed private-public partnership for the Jericho Road extension to serve West Ridge High School and another online survey to consider the Sullivan Middle School Raiders may be voted on at Thursday's Sullivan County school board meeting.