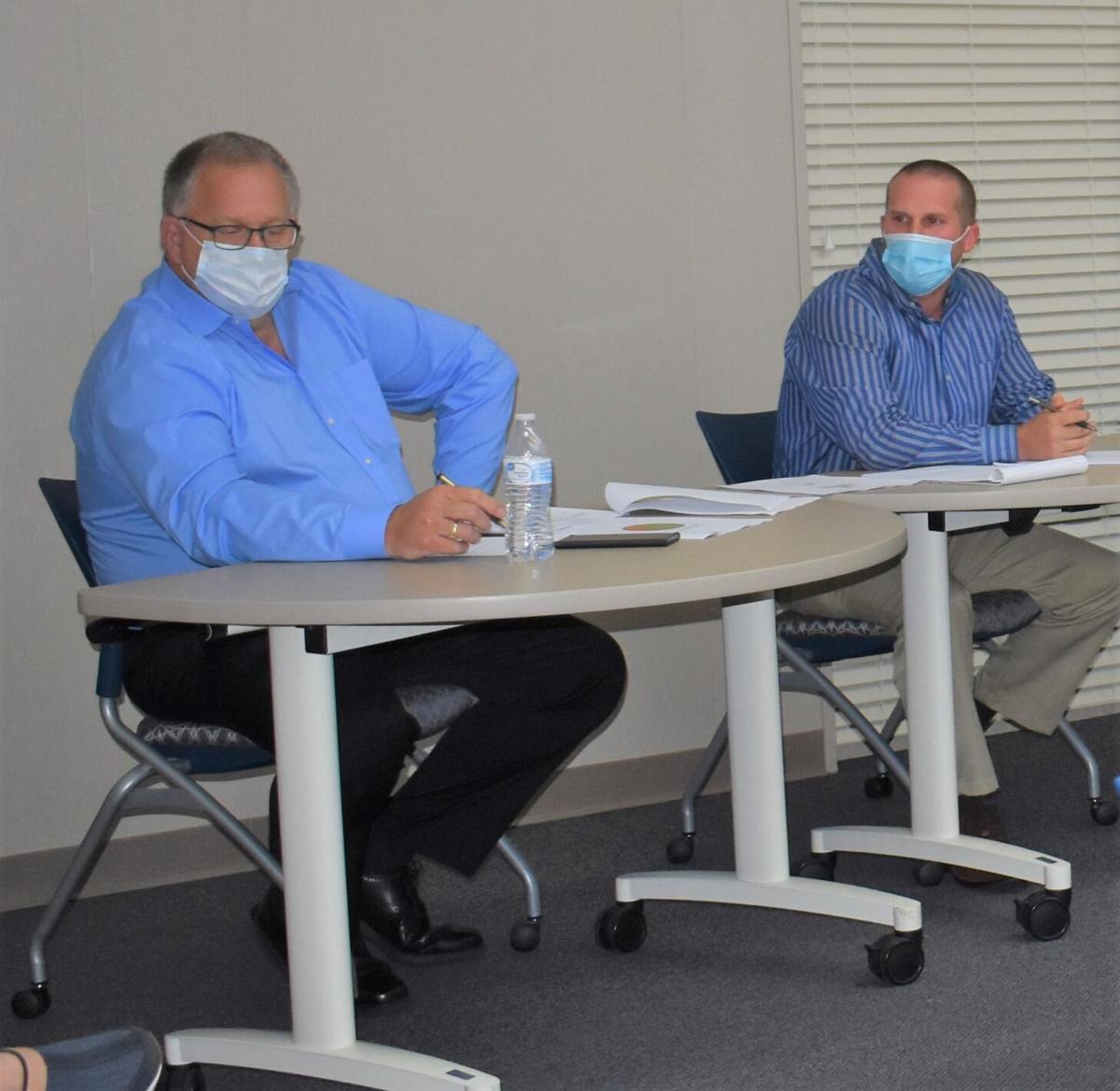 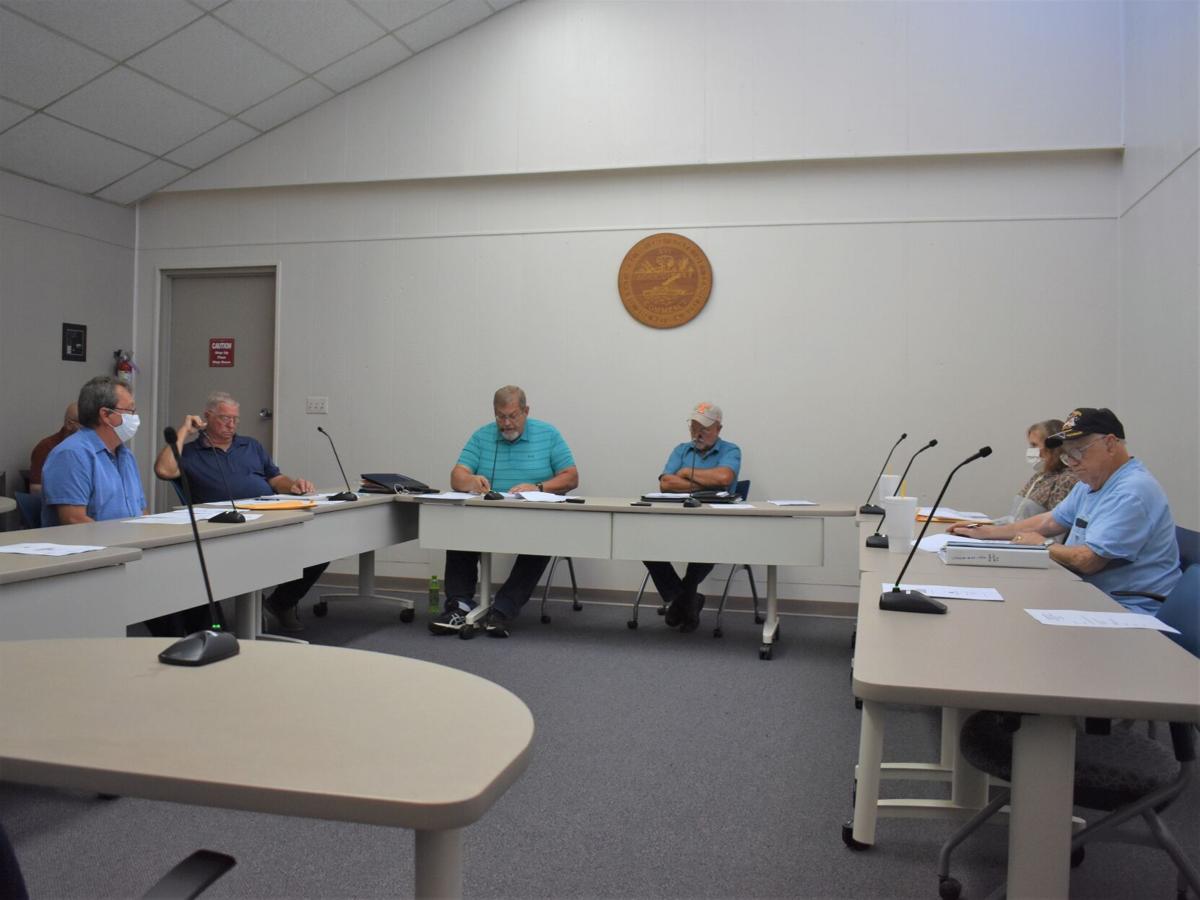 A motion Monday by Budget Committee member Valarie Goins, second from right, to recommend the $9.5 million bond issue to the full county commission failed for lack of a second. The bond resolution will still be on the commission's Sept. 28 agenda, but without a recommendation.

A motion Monday by Budget Committee member Valarie Goins, second from right, to recommend the $9.5 million bond issue to the full county commission failed for lack of a second. The bond resolution will still be on the commission's Sept. 28 agenda, but without a recommendation.

ROGERSVILLE — On Monday, the Hawkins County Commission’s Budget Committee rejected a resolution calling for a $9.5 million bond issue that would pay to replace the aging and inefficient HVAC systems at Cherokee and Volunteer high schools.

Cumberland Securities bond adviser Chris Bessler told the Budget Committee it would need to increase the county’s property tax rate by 5 cents beginning in 2021-22 to cover bond payments for the next 20 years, which will be about $640,000 annually.

Commissioner Rick Brewer said he “absolutely will not” vote for a 5 cent property tax increase.

The bond resolution is still on the agenda for the Sept. 28 County Commission meeting. Director of Schools Matt Hixson said he’s hoping to present commissioners with information at that time that might convince them this is a worthwhile project.

”This is a very important project and much needed”

Hixson told the Budget Committee that the BOE might be willing to dip into its reserve fund balance to decrease the amount of debt incurred by this project.

Hixson noted that over the past decade the County Commission has “borrowed” about 7 cents worth of property tax revenue, or nearly $800,000 annually, from the BOE’s debt service fund in order to balance the county budget.

“We’re willing to put some money toward this project, but I would like some pennies to come back into the (school) debt service so that both entities are paying for it. We can’t contribute much, but we’re willing to put our money where our mouth is because this is a very important project and much needed.”

Hixson noted that there is also substantial annual energy savings to be gained when the new HVAC systems are installed at both high schools. The HVAC units are 27 years old.

The HVAC systems at both high schools are essentially heating and cooling the attics and crawl spaces above the ceilings.

Trane officials told the BOE last month the energy savings with new equipment and duct work would be “substantial” but they wouldn’t submit a savings figure because they can’t guarantee a specific number.

Hixson told the Budget Committee that although the duct work savings is unknown, there are energy savings estimates regarding the new HVAC equipment that he hopes to present to the commission Sept. 28.

Bad timing to ask for a new bond

This proposed HVAC project comes only three months after the Board of Education and County Commission approved a $1.25 million expenditure to put artificial turf on both high school football fields. The turf project has been criticized as too costly by the public, county commissioners who didn’t support it and County Mayor Jim Lee.

Following a lengthy Budget Committee discussion Monday, Valarie Goins made a motion to recommend the HVAC bond to the full commission.

Goins said that although she opposed the turf project and regrets that it was approved, students still need HVAC that functions properly to be comfortable in their classrooms.

Goins’ motion failed for lack of a second. As a result, the commission will consider the bond resolution Sept. 28 without a recommendation.

”It’s being held together with duct tape”

Bessler told the Budget Committee that with bond interest down to approximately 2.5%, now is a good time to float a bond if there are capital outlay projects that the county will have to do anyway.

When the bond goes out for bid, however, Bessler said the actual interest rates that are submitted will likely be below estimate.

“We’ve got over $4 million worth of county projects that we’re in dire need of,” Lee said. “I think Matt is doing a great job, but this can wait.”

Hixson replied, “With all due respect, it’s being held together with duct tape, cardboard, other things up there in the duct work. We’ll do whatever you guys want us to do, but when the education debt service fund is borrowed from (by the County Commission) and never put back, we find ourselves in a pickle when we have these big issues come up.”

The $9.5 million HVAC project is part of an overall $13.7 million energy efficiency project that the BOE voted to move forward with last month.

Aside from the HVAC at both main high schools, the project entails installation of new energy efficient LED lighting at every county school.

The BOE will receive a $5 million Tennessee Energy Efficient Schools Initiative (EESI) loan at 0.5% interest, which would be repaid using energy savings guaranteed by Trane that the school system would realize when the LED light installation is completed.

Trane guaranteed more than $300,000 in savings annually with the LED lighting, and if the saving falls below that number, Trane will make up the difference to pay off the EESI loan.

Hixson told the Times News after Monday’s Budget Committee meeting he anticipates that the BOE will continue with the LED lighting project even if the HVAC bond issue isn’t approved by the County Commission.

ROGERSVILLE — The Hawkins County Board of Education voted on Thursday evening to move forward with a $13.7 million energy efficiency project t…