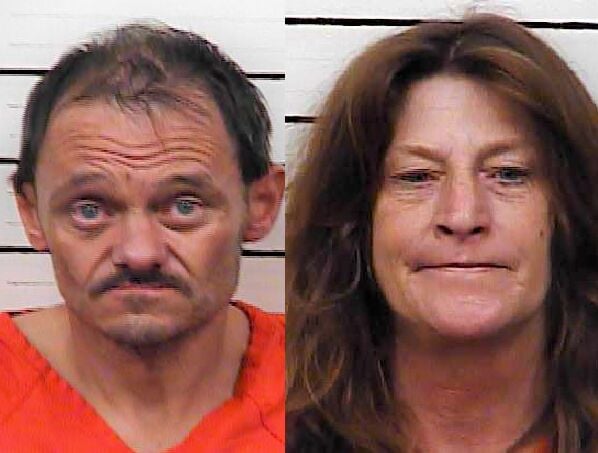 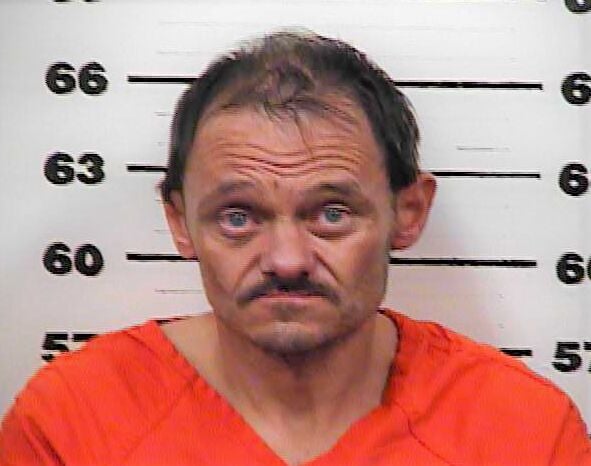 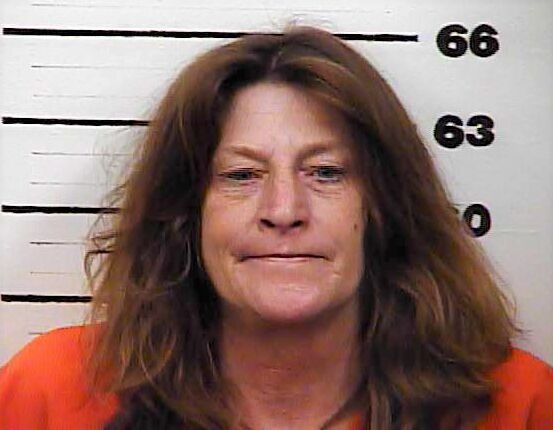 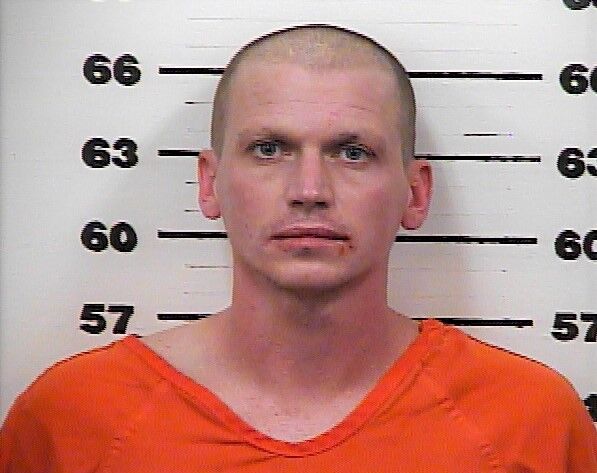 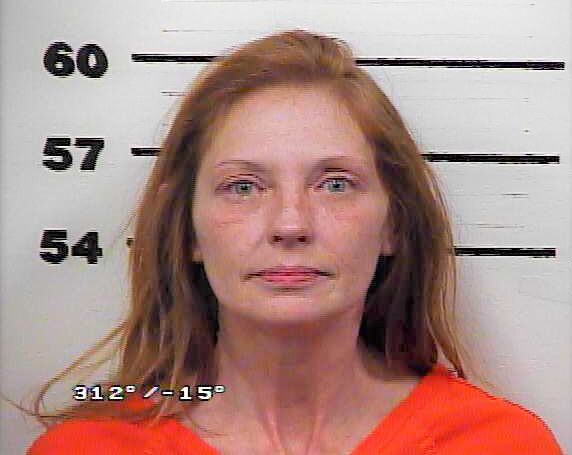 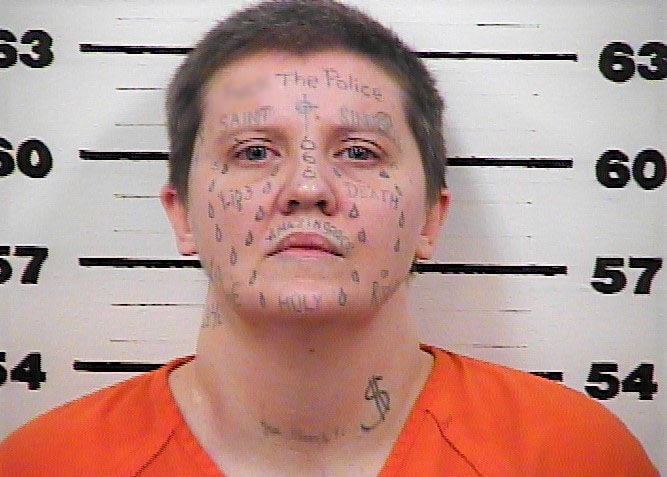 Ginger Teresa Bundren (This mugshot was edited to obscure profanity tattooed on her face.) 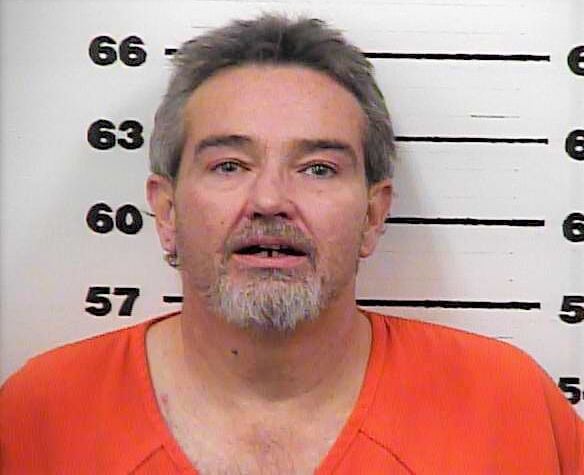 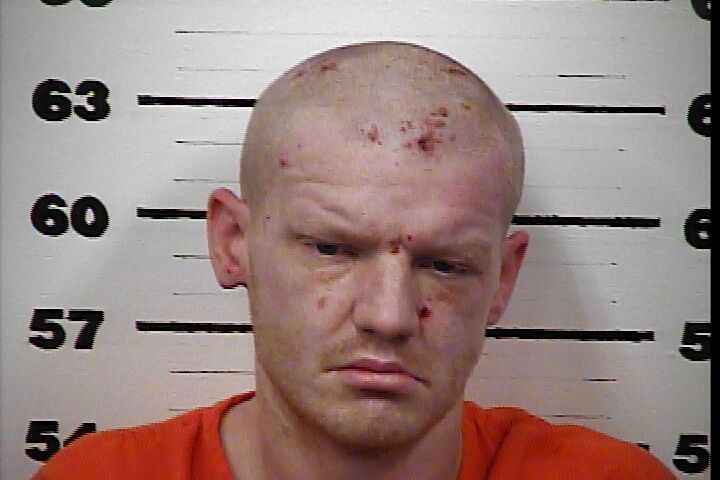 Ginger Teresa Bundren (This mugshot was edited to obscure profanity tattooed on her face.)

Deputy Issac Hutchins stated in his report he observed a Chevy S-10 traveling on Highway 11-W with broken taillight covers. The license plate came back expired in 2017, although it was later discovered that a 2021 sticker had been taken from another vehicle and attached to the tag.

Upon conducting a traffic stop, Hutchins reportedly observed the driver, Jason Anthony Higgins, 43, 145 Blackberry Lane, Rogersville, trying to shove something under the seat.

When Higgins exited the vehicle, he allegedly attempted to drop a baggy containing an unspecified quantity of meth onto the ground. Upon searching the vehicle, Hutchins reportedly located under the driver’s seat two BB guns “made to look like real pistols,” one of which was in a holster attached to a belt.

In the bed of the truck, Hutchins allegedly located a bag containing two bottles of liquor and a Mason jar containing what was believed to be moonshine.

Higgins’ passenger, Leslie Ann Wallen, 52, same address, was allegedly found in possession of one Gabapentin pill, a meth pipe and a set of brass knuckles.

Burglary suspect made himself at home for two days

Larry Neal Bass Jr., 35, 249 Steele Road, Rogersville, was arrested Jan. 4 and charged with aggravated burglary, burglary and vandalism over $1,000 after he allegedly broke into a house on Armstrong Road in Rogersville and admittedly stayed there for two days.

Rogersville Police Department Detective Charlie Gibson reportedly located Bass inside the residence after the owner came home and found Bass, whom he doesn’t know, inside. Gibson stated in his report there was $2,000 worth of damage to the front door frame and Sheetrock as a result of the burglary.

Bass allegedly admitted to breaking into an out-building, entering the house through the front door, and living in the house for approximately two days.

Erika Lee Worrell, 43, 344 W. Broadway St., Rogersville, was arrested Dec. 31 and charged with DUI, assault, possession of a firearm by an intoxicated person, resisting arrest, violation of the open container law and violation of the implied consent law after she was located parked at the end of a stranger’s driveway on Rong Road near Bulls Gap.

The homeowner reportedly told Central Dispatch that a woman later identified as Worrell was sitting in her car screaming. Worrell allegedly told HCSO Sgt. Sam Wilhoit she had come from the County Line Bar on 11-E and showed him a 24 ounce can of beer after stating she’d only consumed one beer.

She allegedly became argumentative with deputies and refused to exit her car, at which time she was helped from the vehicle by deputies. Worrell then allegedly refused to comply during her arrest and kicked Wilhoit in the groin as she was being placed in the backseat of his cruiser. A loaded .380 Cobra handgun was reportedly found in her driver’s side door.

Ginger Teresa Bundren, 39, 216 Taylor Street, Rogersville, was arrested on Jan. 4 on a pending Hawkins county grand jury sealed indictment warrant charging her with possession of meth with intent to deliver, as well as a pending failure to appear warrant in Sessions Court.

The indictment, which dates back to Oct. 1, 2019, alleges that on Nov. 20, 2018, Bundren was criminally responsible for knowingly delivering meth in excess of a half gram.

On Wednesday, she also pleaded guilty in Sessions Court to a resisting arrest charge dating back to Aug. 10, 2019, and was sentenced to time served. She was being held in the Hawkins County Jail on $50,000 bond on the meth charge.

Joshua Anthony Layne, 28, 914 Holliston Mills Road, Church Hill, was arrested Jan. 7 and charged with meth possession and shoplifting after a store employee of the Route 66 Quick Stop near Rogersville reportedly observed him enter the restroom and then heard a “snorting” sound.

The employee told Deputy Dustin Winter that Layne exited the restroom about 20 minutes later, appeared intoxicated, and she thought he may have taken something.

When confronted by the deputy, Layne voluntarily emptied his pockets, and allegedly tried to hand a baggy of meth to his mother, who recoiled from it. Layne was also allegedly found to have stolen a pack of batteries.

PI suspect admits, ‘It’s been a hell of a year’

Allen Lynn Brummitt, 50, 480 Fudges Chapel Road, Surgoinsville, was arrested Dec. 31 and charged with public intoxication after the HCSO responded to a complaint of an intoxicated man walking down Country Lane screaming and yelling in the middle of the road.

While en route, Deputy Isaac Hutchins was stopped by a passing motorist who stated he’d nearly struck a man, later identified as Brummitt, who was lying in the middle of the road at the intersection of Country Lane and Fudges Chapel Road.

Upon locating Brummitt, Hutchins reportedly observed him to have a strong odor of alcohol and to barely be able to stand. Brummitt reportedly stated he’d consumed a lot of vodka and he was drunk, and he was walking in the street because “It’s been a hell of a year.”