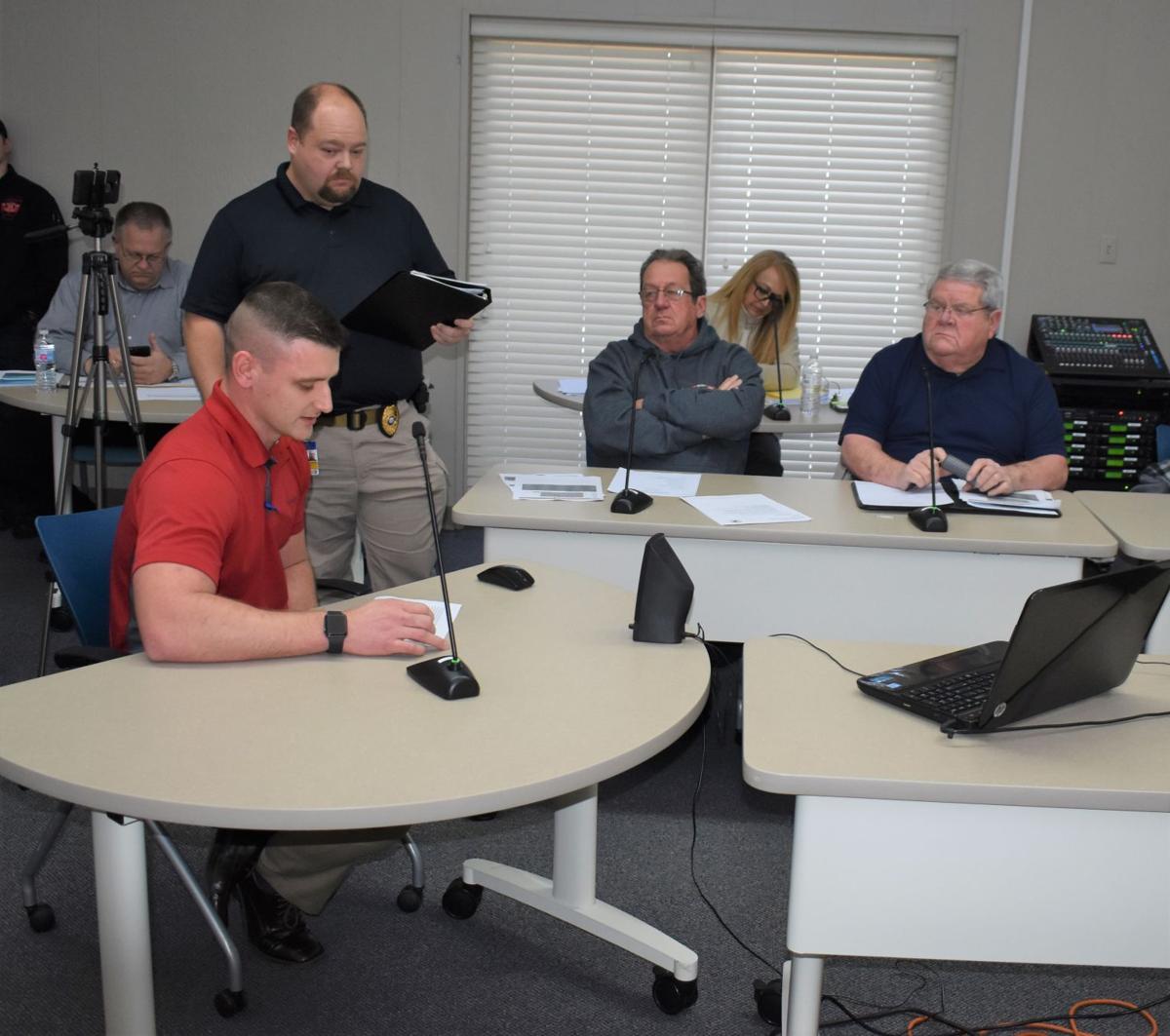 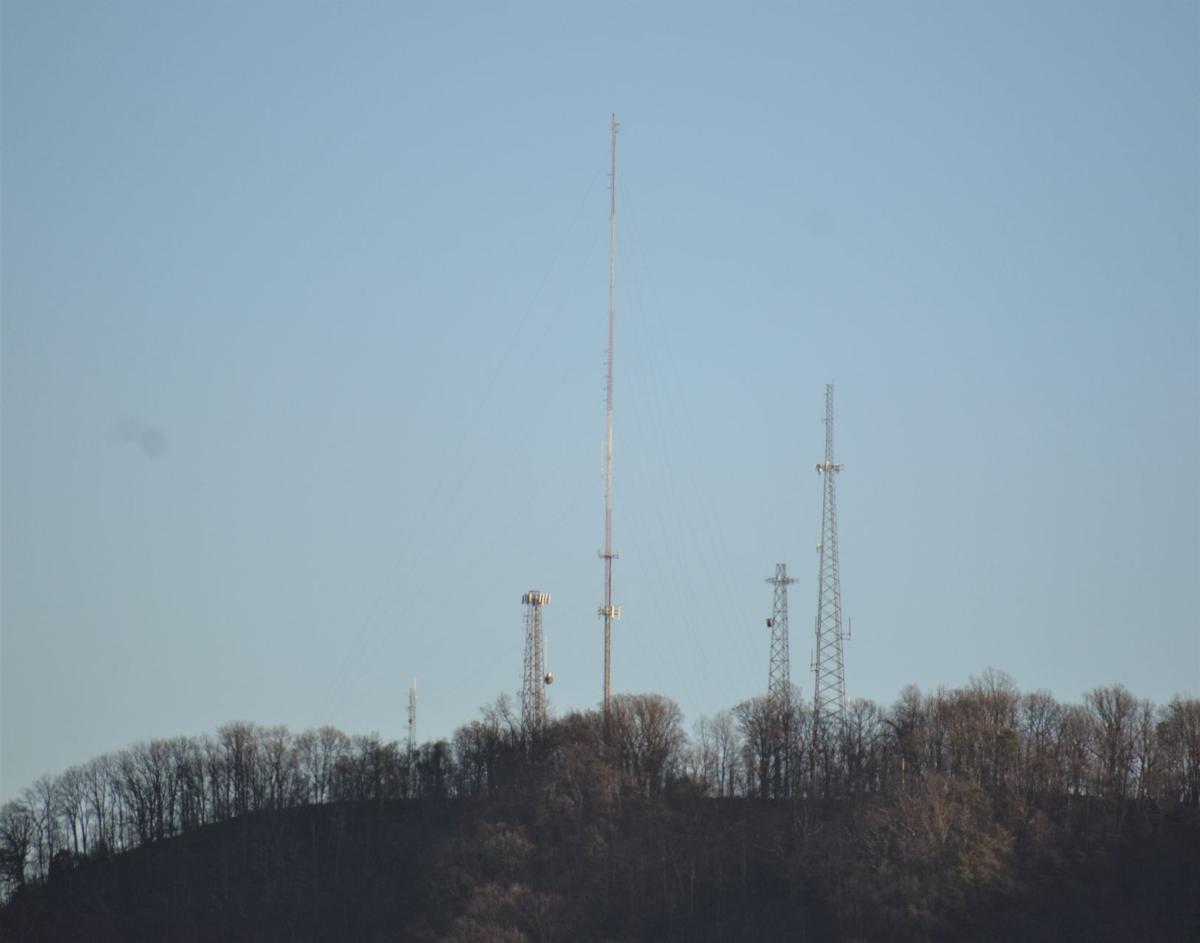 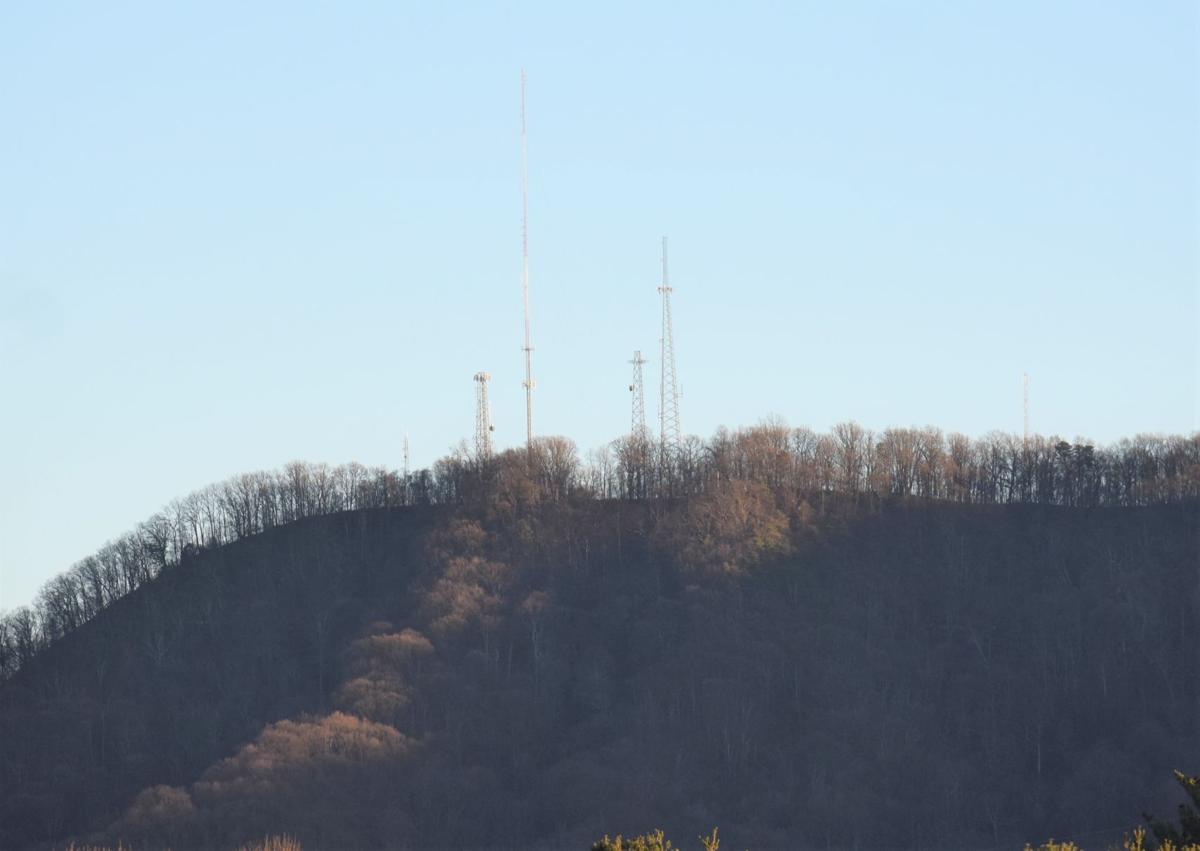 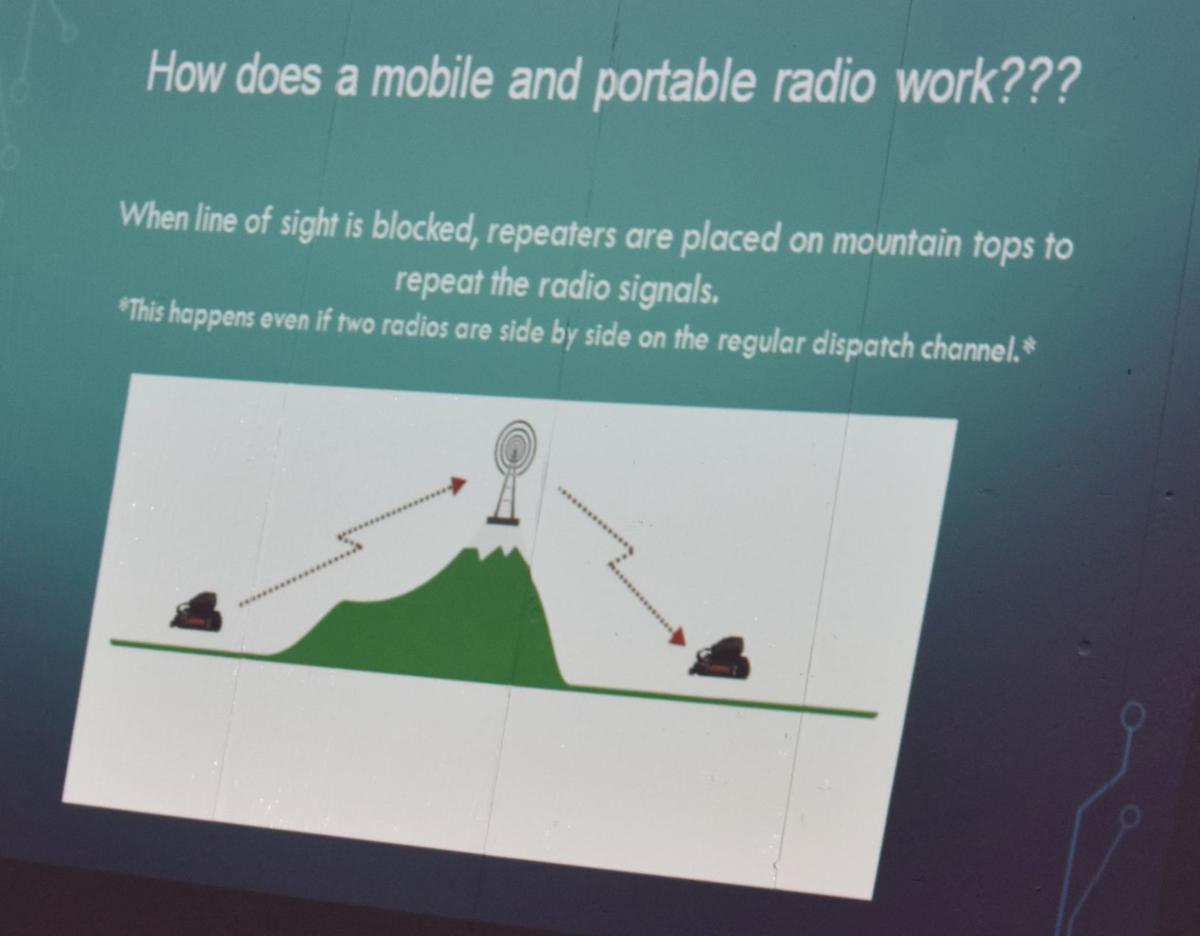 The following is Jamie Miller's power point to the Public Safety Committee. 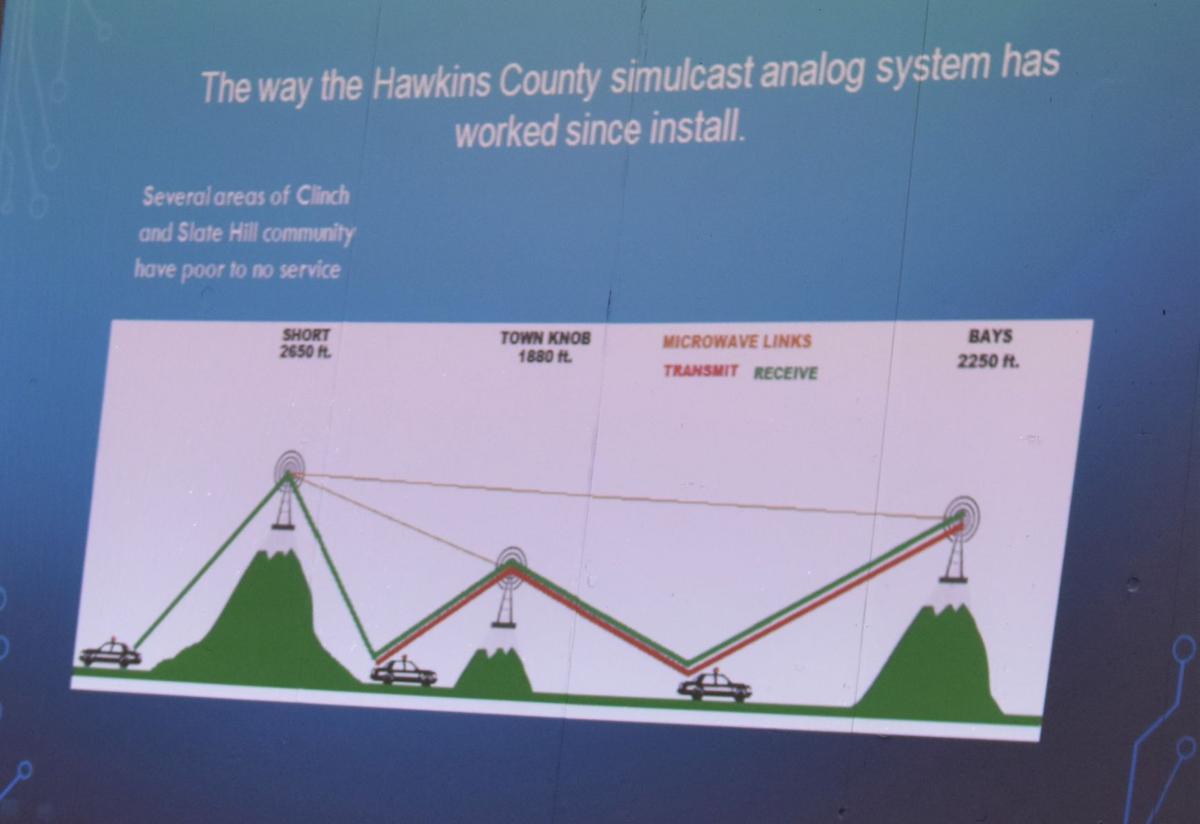 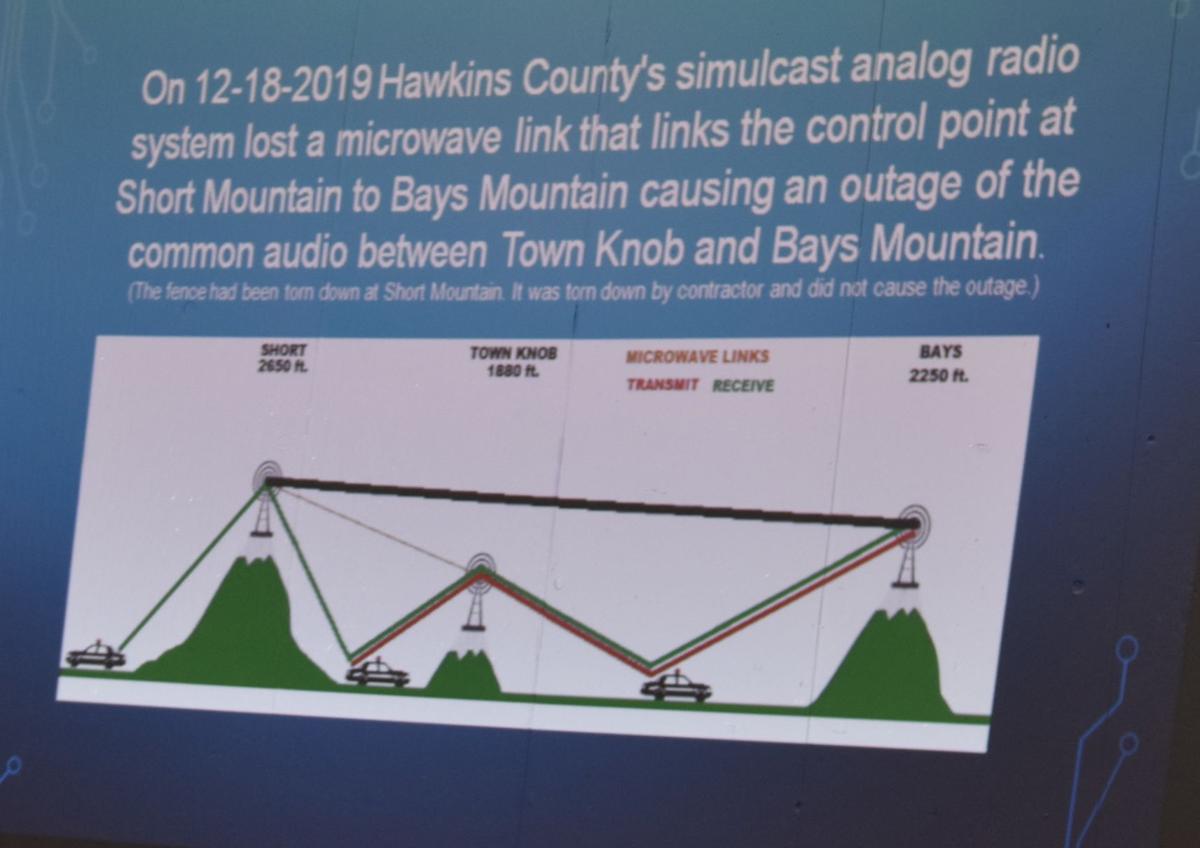 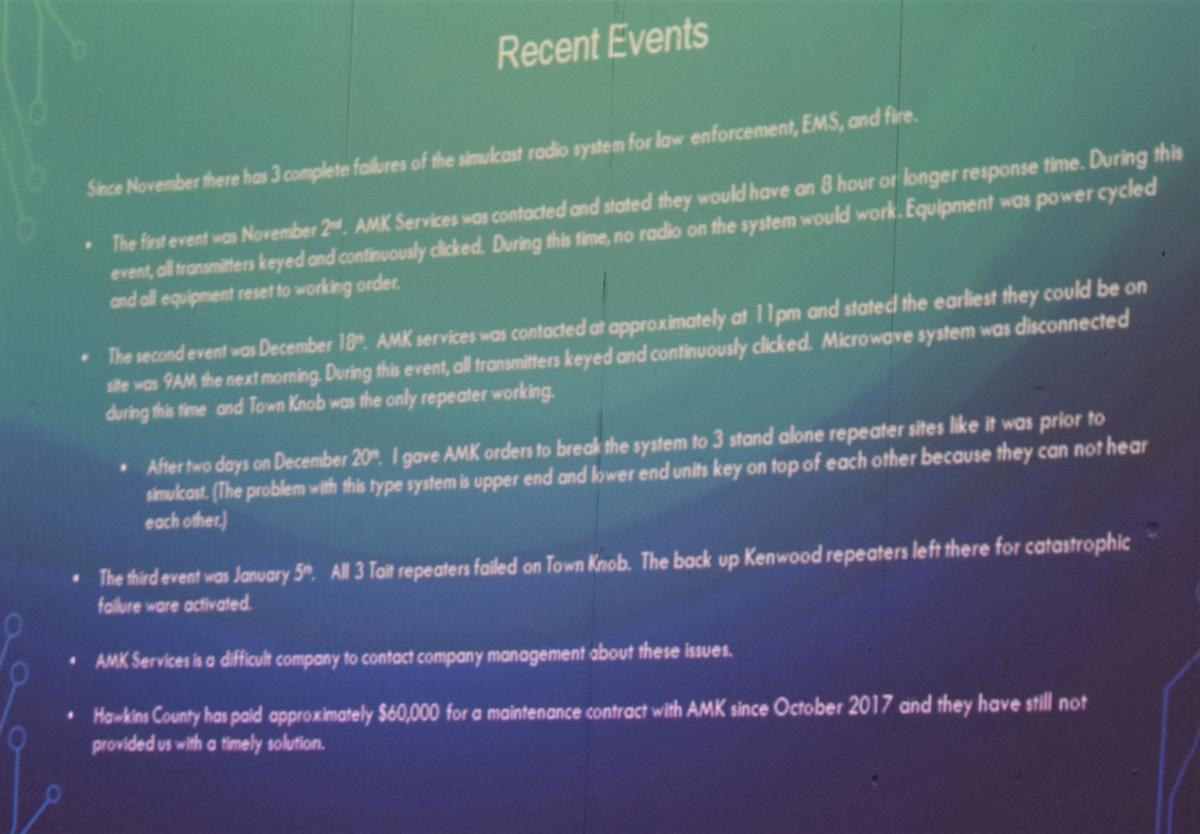 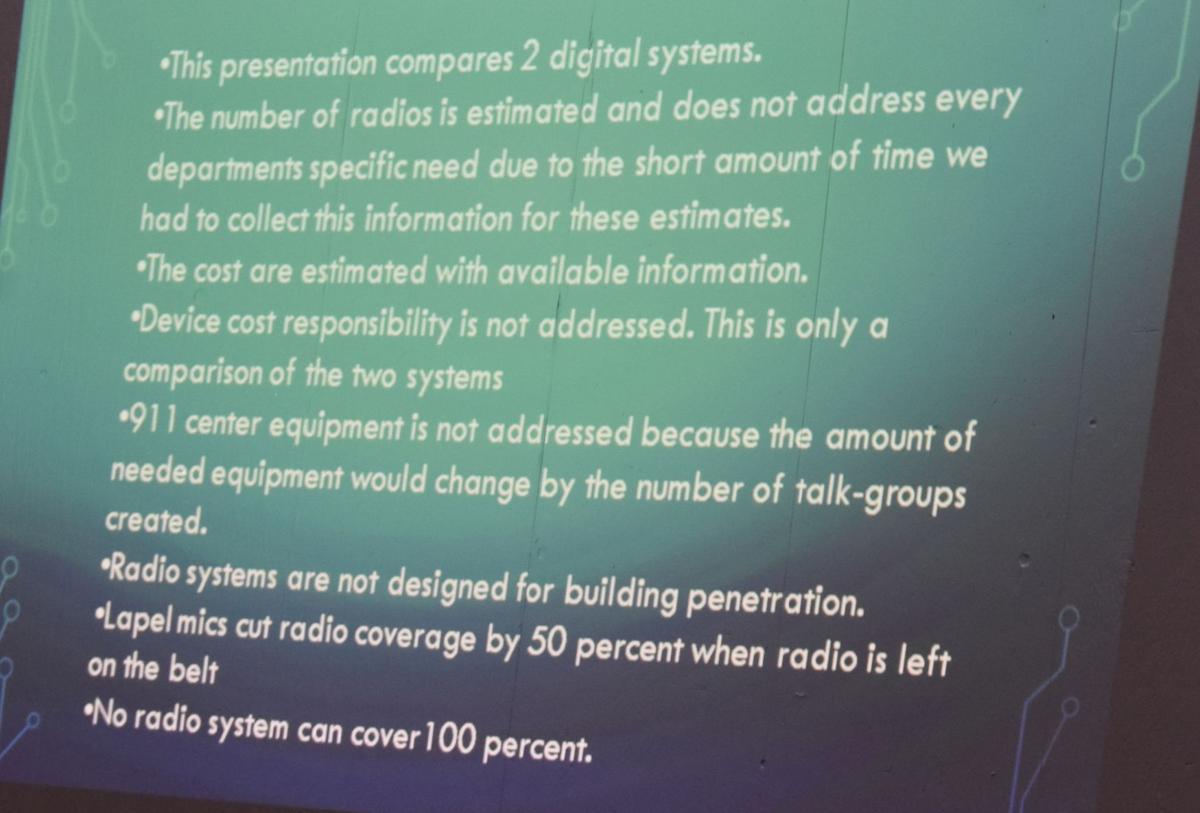 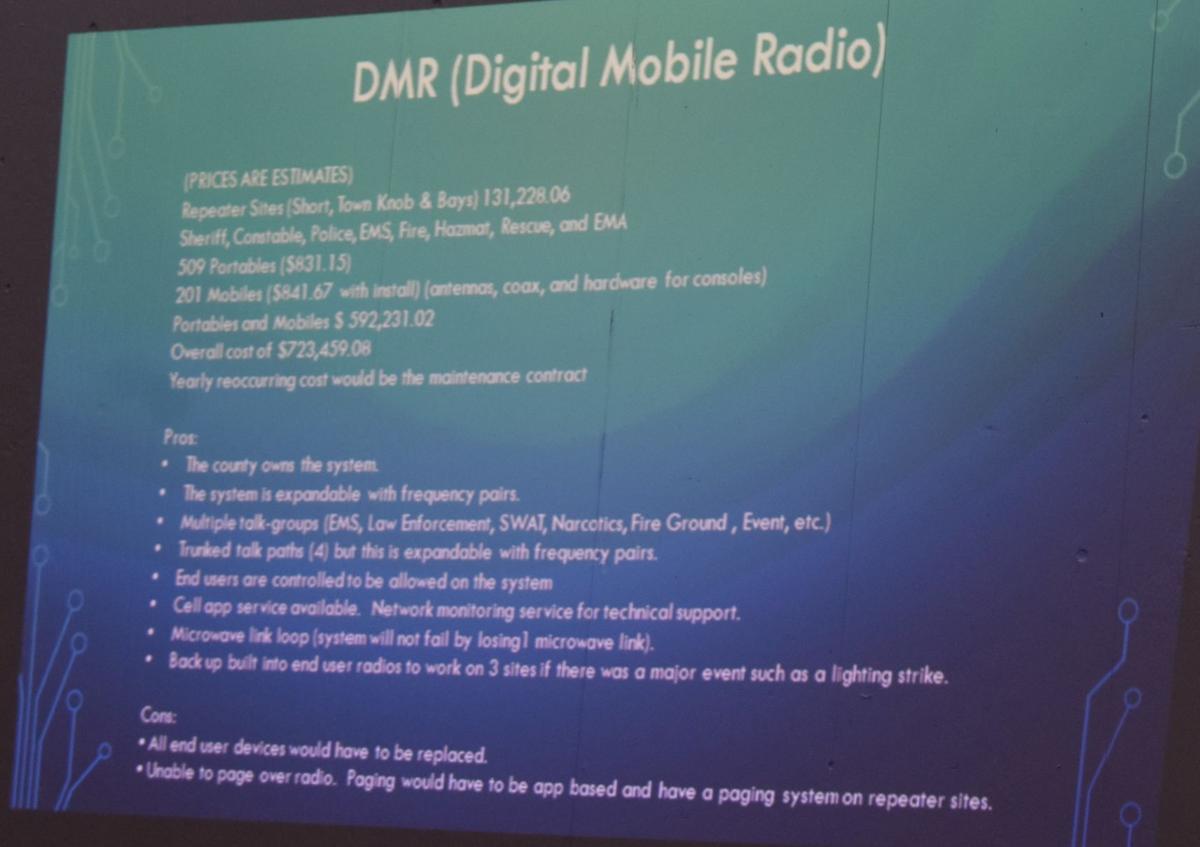 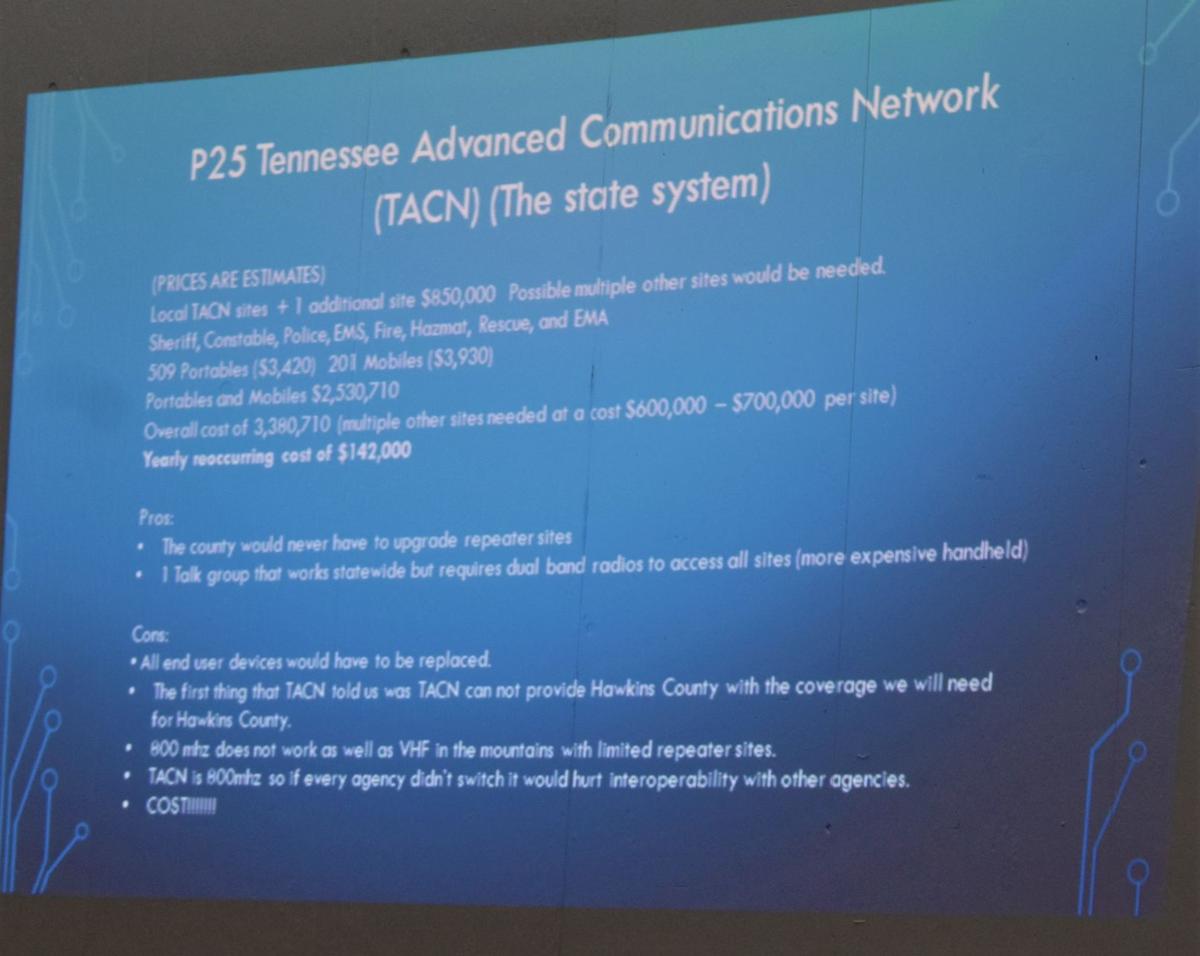 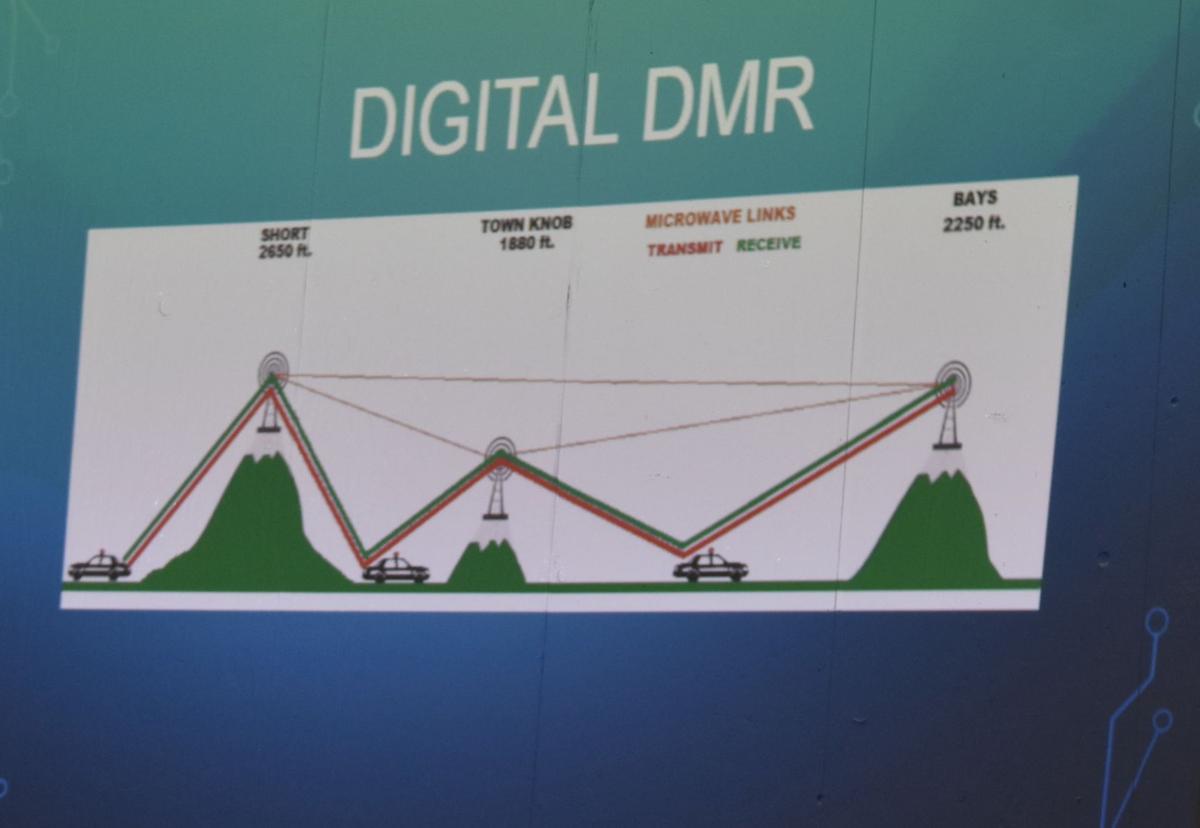 The following is Jamie Miller's power point to the Public Safety Committee.

ROGERSVILLE — A Hawkins County emergency radio outage on Dec. 18 couldn’t have come at a worse time.

Not only did Sheriff Ronnie Lawson have 21 deputies involved in a manhunt for two murder suspects, but there were also two high speed chases during the downtime.

There have been three countywide emergency radio outages since Nov. 2.

The system was put back online with reserve equipment dating to the early 2000s, but Emergency Management Agency Director Jamie Miller told the PSC Wednesday it’s not reliable.

“We are operational, but it’s not the best the system could be, and there is the opportunity there for someone to not be heard,” Miller said.

Equally troubling is the fact that there is no more reserve equipment for the county to fall back on.

Miller presented the PSC with options for repairing or replacing the existing equipment, with cost estimates for two replacement digital radio systems ranging from $723,000 to  $3.38 million.

Following a lengthy discussion, the PSC asked Lee and Miller to appoint a task force of department heads to examine the county’s radio options and return to the committee with a recommendation.

Committee members agreed that the emergency radio problem needs to be a top priority and voted to begin meeting monthly instead of quarterly, with the next meeting set for Feb. 5.

Hawkins County has three emergency radio antenna/repeater locations: Short Mountain to the west, Town Knob in the center near Rogersville, and Bays Mountain to the east.

There have been three complete outages of the emergency radio system since Nov. 2, when all three transmitters keyed and clicked continuously, and no radio on the system worked.

Miller said the equipment was power-cycled and reset to working order on Nov. 2.

“Luckily we don’t have everything in this one system,” Miller said. “That way when it failed, we were able to use the channels like Rescue Squad, Highway Department — those type channels.”

Miller explained to the PSC that on Dec. 18 Hawkins County’s simulcast analog radio system lost a microwave link that joins the control point at Short Mountain to Bays Mountain, causing an outage of the common audio between Town Knob and Bays Mountain.

“That caused the system to go into complete failure at that point,” Miller said. “We had a lot of clicks on the radio. The system was locked down, unable to be used.”

During the Dec. 18 outage, which occurred at 11 p.m., the maintenance provider couldn’t arrive until 9 the next morning.

At that time, only the Town Knob repeater worked, and after two days Miller told the vendor to break the system into three stand-alone systems so that there could be some communication. That eliminated a fix that was installed when the county radio system was upgraded to simulcast in 2015.

The danger of the stand-alone repeaters is that users on opposite ends of the county often key their mics on top of each other and can’t hear each other.

On Jan. 5, all three repeaters on Town Knob failed and were replaced with backup repeaters.

The county’s radio maintenance vendor didn’t know what was wrong with the system and advised Miller that a new link radio could be ordered and would arrive in about eight weeks from New Zealand at a cost of $11,318.

Miller noted that Hawkins County has paid approximately $60,000 for its current emergency radio maintenance contract since October 2017, and the vendor has yet to provide the county with a timely solution. The last of the reserve equipment is being used at Short Mountain and Town Knob.

“There’s no spares left,” Miller said. “As far as time-pressing issues, we’re there.”

Miller consulted with multiple emergency radio vendors about Hawkins County’s radio problem, and there was a consensus that it would be very complex to add another transmitter to expand the current system. Moreover, it would be a costly upgrade that probably wouldn’t be reliable, Miller told the committee.

Miller presented the PSC with two options Wednesday for a replacement digital system.

Option one was the P25 Tennessee Advanced Communications Network (TACN) commonly referred to as the state system, which is estimated to cost $3.38 million, with an annual recurring cost of $142,000, not including equipment upgrades for Hawkins County Central Dispatch.

The second option presented by Miller was for a DMR (Digital Mobile Radio) system at an estimated cost of $723,459, not including the cost of equipment upgrades for Central Dispatch.

“This is a serious matter”

Lee noted that there is potential for grant funding in excess of $420,000 for a radio system replacement. Although that grant hasn’t been approved, Lee said it’s promising.

“We need to do this quick because we’ve got a lot of officers, EMS and fire personnel out there who are in danger,” Lee said. “This is a serious matter.”

The commission spent about $340,000 in 2015 to upgrade its emergency radio system and eliminate an abundance of radio dead zones that were putting officers’ lives in danger.

Commissioner John Metz requested the appointment of a task force to study options and return with a recommendation.

“My concern is making a knee-jerk reaction decision,” Metz said. “A few years ago, we thought we had made some decisions that rectified issues, and now we’re here back again. I don’t want to leave the next commission in just as bad a position as we are now.”