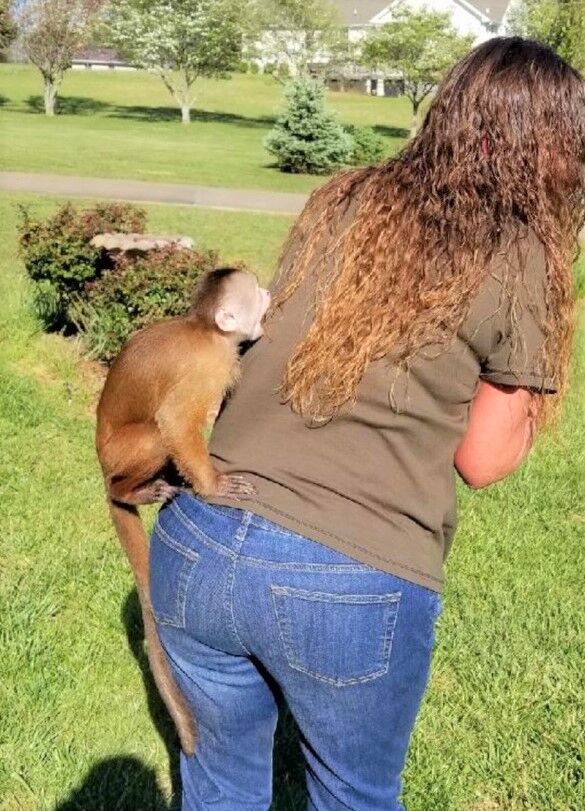 A few months ago, Chester got loose and jumped on the back of Linda Goins’ daughter while she was visiting Goins on Nikki Circle near Church Hill. A family member snapped this photo. 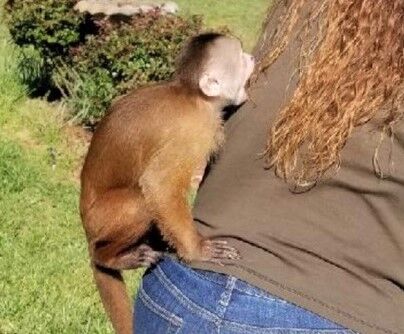 A few months ago, Chester got loose and jumped on the back of Linda Goins’ daughter while she was visiting Goins on Nikki Circle near Church Hill. A family member snapped this photo.

CHURCH HILL — Chester is a friendly Capuchin monkey, but for some of his neighbor’s he’s a bit too friendly when he gets loose and roams his neighborhood on Nikki Circle in the Carters Valley area near Church Hill.

Linda Goins, 79, said Chester jumped on her legs and tried to bite her Thursday evening and then jumped onto her car, leaving handprints. Goins told the Times News on Monday Chester wasn’t being mean and was probably just trying to jump into her arms to be held.

But Goins said it was a scary situation for a woman her age with knee and ankle problems trying to fend off an energetic Capuchin money.

Another neighbor who had an encounter with Chester Thursday evening is 74 years old and asked that her name be withheld. She told the Times News that after Chester left Goins’ house it came to her house. She was on a riding mower, and Chester followed her into a basement garage area.

Again, Chester wanted to jump on the woman, and she kept him at bay with a stick, although Chester eventually took the stick from her. She said she didn’t win the encounter. Chester gave up and went home.

The neighbor told the Times News she then heard Chester’s owner, Connie Waters, 52, scolding Chester for getting out.

Waters told the Times News on Monday that she and Chester weren’t home Thursday evening, so that couldn’t have been Chester who harassed her neighbors. Waters said she believes someone who lives in the same neighborhood a block or two away has monkeys as well, and it must have been them.

Upon being relayed that explanation by the Times News, both Goins and the neighbor laughed.

Both said they know Chester when they see him. He’s gotten out before. Goins offered photographic evidence of an incident that occurred a few months ago when Chester jumped on her daughter’s back.

Apparently, Chester has figured out how to open doors for himself, Goins said.

Shively took statements from Goins and the neighbor but was unable to make contact with Waters. Shively said he would be contacting the Tennessee Wildlife Resources Agency about possible charges against Waters for the monkey running at large.

“I was just out here in my yard putting fertilizer on my flowers when I heard that monkey trying to get through the gate next door,” Goins said. “I looked and saw what it was, ran to my garage, and it beat me to my garage. It got on my car, and it was hopping up and down and going back and forth on the car. All I could find was a rake, but I knew if I swung at that monkey I’d hit the car and the monkey would get on me. So I didn’t do any good with my rake except keep it off of me, but it did try to get up on my legs.”

Goins said, “I’m thinking it hops up in her (Waters’) arms — its owner. It might have wanted to hop up on me, but I’m afraid of it.”

Goins has previous experiences with Chester, including an incident while she was washing her car a few months ago.

“It took my brush away from me,” Goins said. “I had one of those long- handled brushes, and it took the brush from me and threw it toward the road. And when I went and got it, he took it away from me again and threw it toward the house. I got up on my porch and I was screaming and hollering for somebody to come get the monkey, but they didn’t come. It was trying to get in my house, and I picked up the water hose and sprayed it, and it took off home.”

A few months before that, Chester got out and again was trying to jump into someone’s arms. This time it jumped on Goins’ daughter’s back. A family member took a photo of that.

Should the monkey be taken?

Goins and the neighbor both told the Times News they don’t want Waters to lose Chester.

They know Chester “is her baby” and she loves him. They just want her to take precautions to prevent future escapes.

Goins said, “I don’t like trouble from neighbors. I think she should keep it up. Evidently it’s like some of these 2-year-olds that can open a door knob and get out of the house. (Waters) told (the neighbor) it was in the house, but evidently it knows how to open the door and get out when she’s not looking. There’s children across the street. She just needs to keep them up if she’s going to keep them.”

It only took me 20 years to figure out that small town reporters are never going to get rich.

ROGERSVILLE — The Hawkins County Sheriff’s Office is well trained and experienced in a variety of meth lab scenarios, but they entered unchart…

The search for Eric Mowery, a fisherman from Heiskell, Tenn. who went missing after the boat he was in overturned on Saturday morning, will recommence this morning.