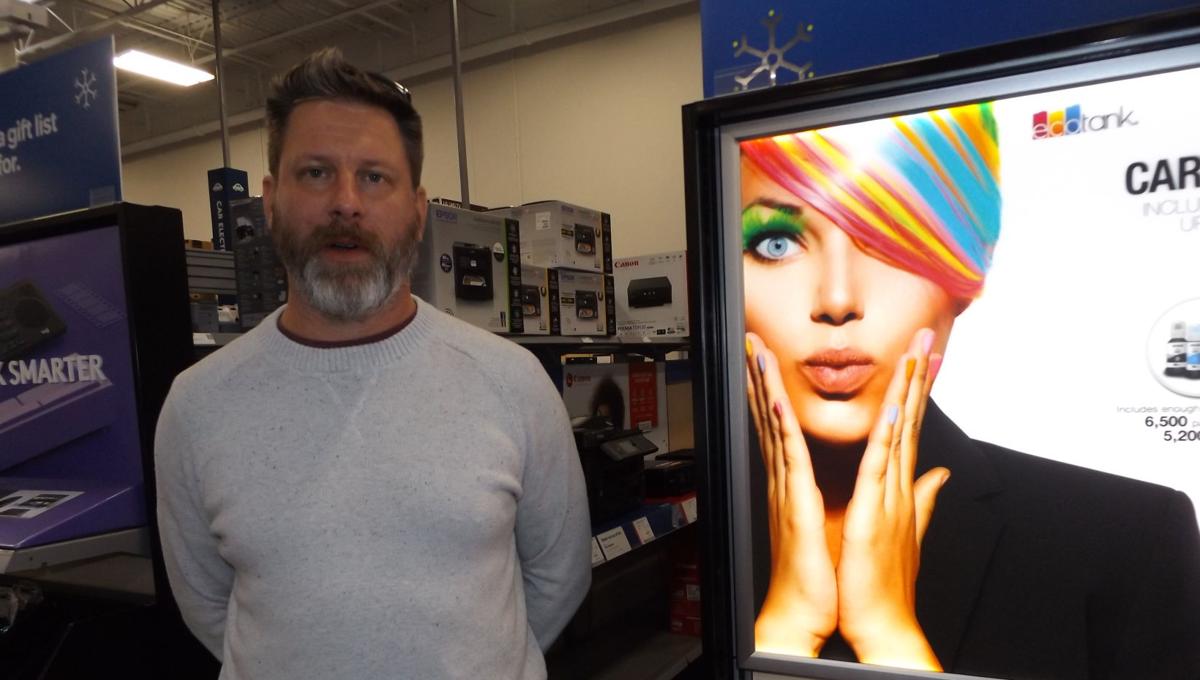 John Simpson of Kingsport talks about his Black Friday Shopping Day at Best Buy in Kingsport in the mid-afternoon of Black Friday 2018. He was looking for a laptop computer. 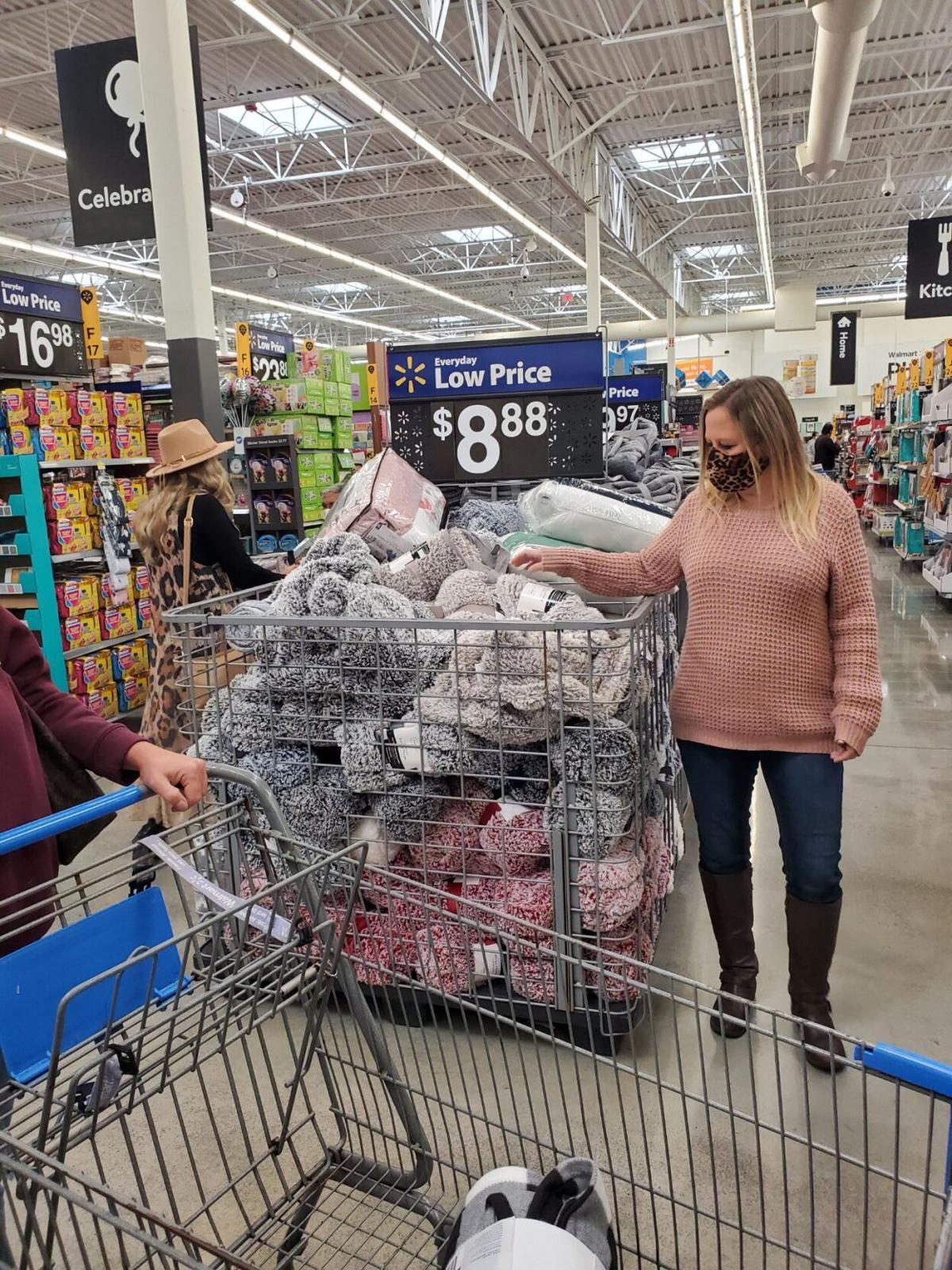 A shopper at the Walmart on West Stone Drive in Kingsport looks for deals on Black Friday last year. 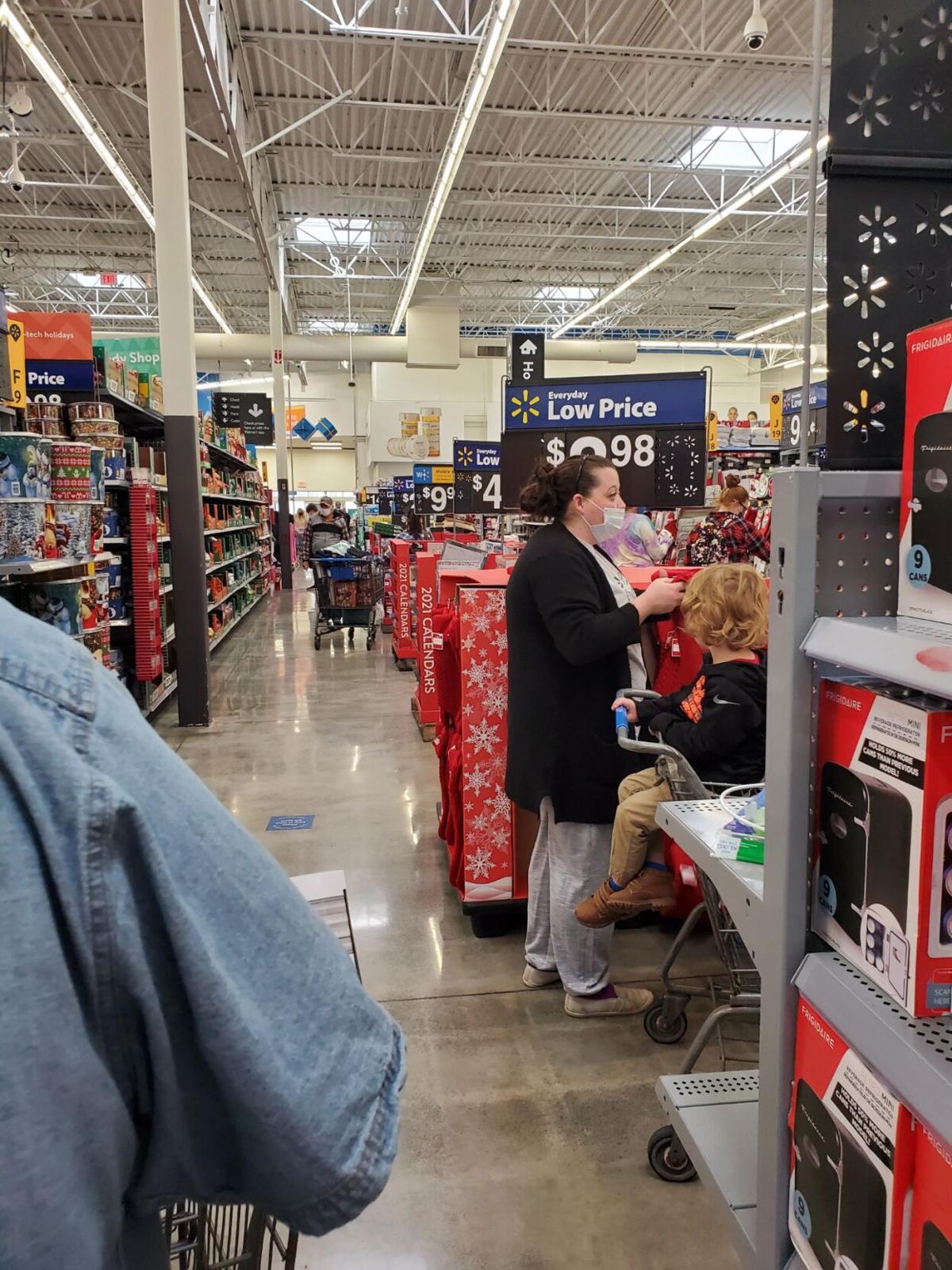 A masked shopper at the Walmart on West Stone Drive in Kingsport shops Black Friday morning of 2020. 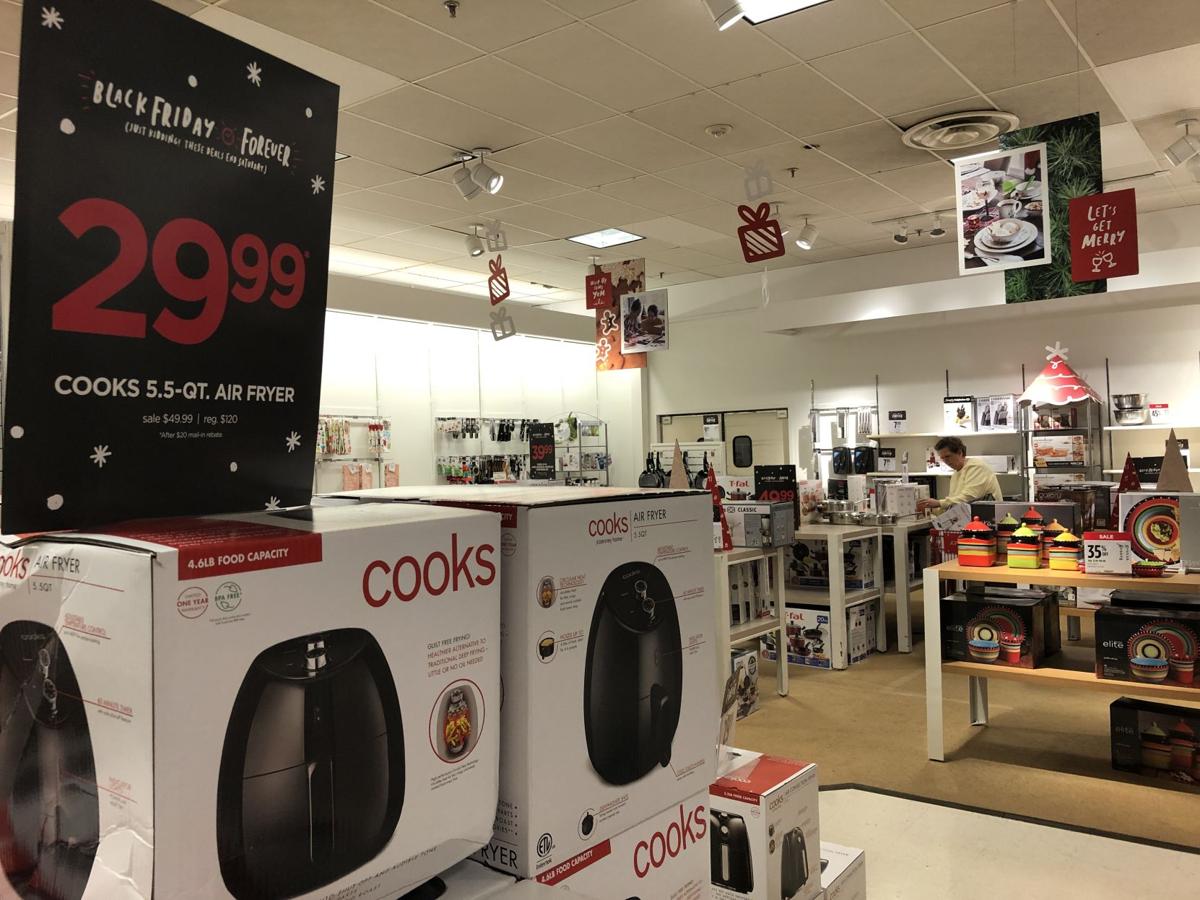 JCPenney in Kingsport, now closed, was full of customers and sale merchandise on Black Friday 2019. The store also opened at 2 p.m. that Thursday with doorbusters. 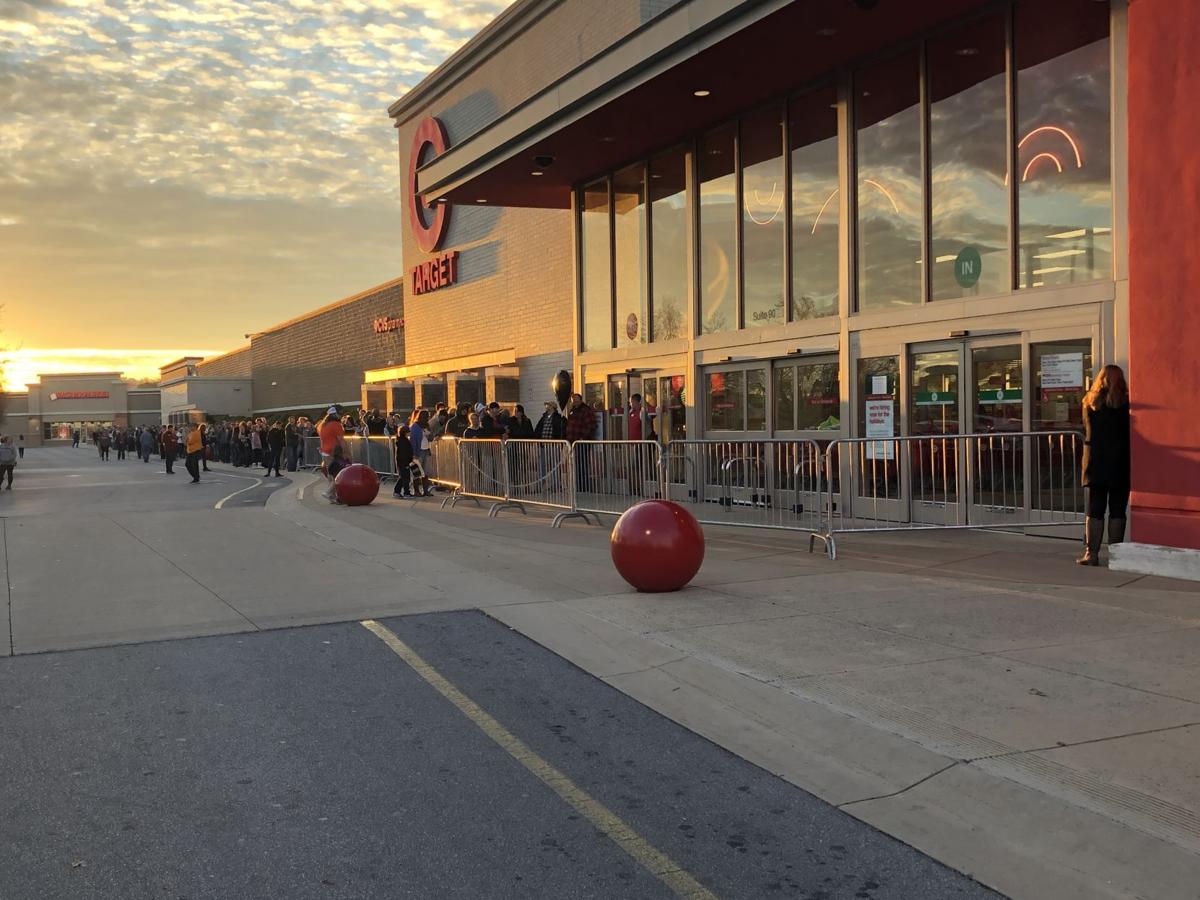 Shoppers line up and prepare to enter Target for its 5 p.m. Thanksgiving Day opening in Kingsport in 2019. Target will be closed this Thanksgiving, but it will open on Black Friday. 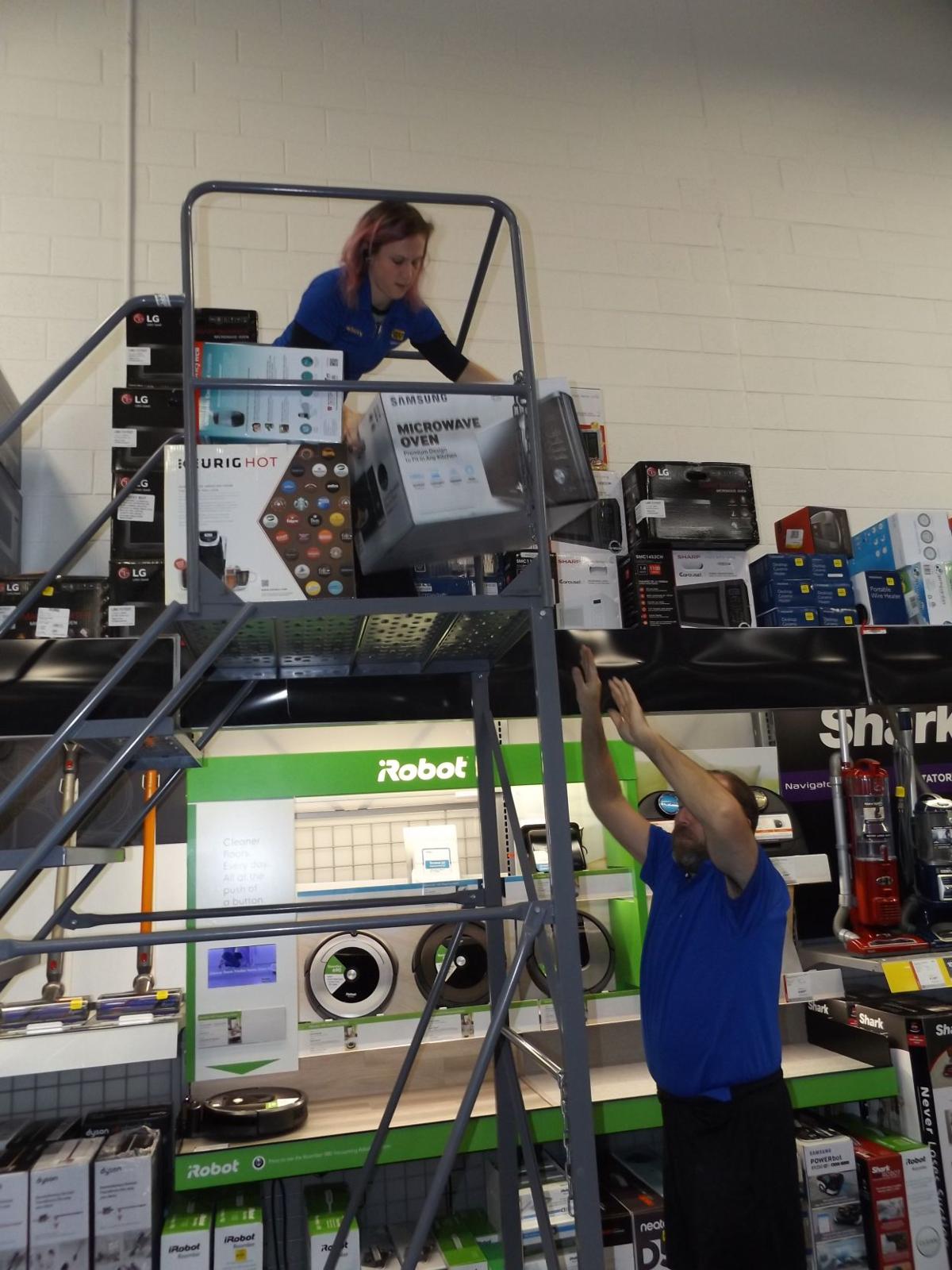 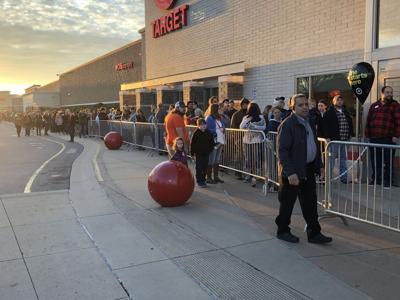 John Simpson of Kingsport talks about his Black Friday Shopping Day at Best Buy in Kingsport in the mid-afternoon of Black Friday 2018. He was looking for a laptop computer.

A shopper at the Walmart on West Stone Drive in Kingsport looks for deals on Black Friday last year.

A masked shopper at the Walmart on West Stone Drive in Kingsport shops Black Friday morning of 2020.

JCPenney in Kingsport, now closed, was full of customers and sale merchandise on Black Friday 2019. The store also opened at 2 p.m. that Thursday with doorbusters.

Shoppers line up and prepare to enter Target for its 5 p.m. Thanksgiving Day opening in Kingsport in 2019. Target will be closed this Thanksgiving, but it will open on Black Friday.

KINGSPORT — A few retailers other than grocery stores will be open here and across the nation Thanksgiving Day.

It is a throwback Thursday of sorts for retail the second year running.

Most retailers, including Walmart, Target, Kohl’s, Belk and other big box stores, will forgo a Thanksgiving opening and wait until Black Friday. Last year, Black Friday saw few stores open on Thanksgiving due to the COVID-19 pandemic.

After the Thursday and Friday sales come Small Business Saturday and Cyber Monday.

Bigs Lots will be open from 7 a.m. to 9 p.m. with doorbusters including free Christmas lights for those with a Big Lots frequent shopper rewards card. Most Dollar Tree stores here and nationwide will be open but hours will vary by location.

“I probably will hit Big Lots” Thursday, said Pam Shipley, an avid Black Friday shopper from Kingsport. However, she said much of her shopping is being done now in pre-Black Friday sales and Black Friday-themed sales that began around the first of November.

Others to be open Thursday are Cabela’s, which has a Johnson City location, from 9 a.m. to 6 p.m., CVS Pharmacy at regular hours, some of which are 24-7, Family Dollar, and Rite Aide with abbreviated hours. Grocery stores are open for abbreviated hours, too, for folks to pick up last-minute food items.

“I just think it (Thanksgiving) should be for family,” said avid Black Friday shopper Judy Bowery of Hawkins County, near Rogesrville.

”Kmart was the one that started the whole being open for Thanksgiving thing,” Shipley said, although in the late 1990s and early 2000s, the old Ames store in Kingsport (where Hill’s used to be) opened on Thanksgiving.

Kmart also closed its Tri-Cities stores, as did Sears, and the only JCPenney in the Tri-Cities is in Johnson City.

INSERTS, FLIERS NOT AS PLENTIFUL

“I’m just not getting the fliers in the mail or the paper. I miss that,” Bowery said. Although she uses websites and sometime cellphone apps to track Black Friday deals, she said the paper fliers are good to look at as the Thanksgiving turkey and dressing digest.

Many inserts have been appearing throughout November for deals covering longer time periods than the traditional Black Friday sales.

Bowery and Shipley said they have been shopping online and in person already, although Shipley said she’s not looking for big-ticket items this year, just things like pajamas, socks and such.

“I’ve been buying for the past two or three weeks,” Shipley said.

“Everybody’s got phones now. Everybody’s got TVs,” Shipley added, although she said she might “get in the madness” Friday morning and even go to the Pinnacle if someone in the family will go with her. If she does, however, she said she will be wearing a mask.

Bowery said that Kohl’s, which opens Black Friday morning, already has some great 15% off deals and $15 off $50 coupons, as do other retailers. She said she will shop Rogersville and Kingsport for her in-person gift buying but probably not Pinnacle.

Lowe’s, Home Depot and other retailers will also be open Friday with Black Friday deals.

Issues affecting holiday shopping this year are a backed-up supply chain and high inflation rates in the aftermath of the pandemic, as well as employee shortages in some businesses.

The evening television news and national print media have carried images of container ships not unloaded in port, and grocery stores have empty sections of shelves. Local businesses have signs out front seeking job applicants.

Ron Lenihan, in an article for TheStreet, says that the supply chain issues and inflation “could mean that Black Friday bargain hunters might not see as many gangbuster deals as they usual would.”

An article from NerdWallet by Courtney Jespersen and republished by MarketWatch said supply chain issues will be a factor and that online sales will continue to blossom this year.

Bowery said she’s seen what she suspects is a combination of supply chain problems and low employee levels in Walmart, where many items were plentiful, even pre-Black Friday special ones, but things like paper plates and tissues were sold out or in short supply.

She said another issue is a shortage of cashiers and self-checkouts overrun with shoppers.

Bryan Cannon, CEO and chief portfolio strategist for Cannon Advisors, told Lenihan that shoppers might not see as many great deals in 2021 as in previous holiday seasons due to the supply chain constraints as a result of COVID-19 and labor shortages. Rising shipping and material costs will have a direct impact on the prices consumers pay at check out, Cannon told Lenihan.

“The consumers who were financially unimpacted by the pandemic fallout will continue to shop as usual,” Cannon said. “However, those who lost their jobs and are feeling the pinch from inflation will scale their shopping back this year.”

ONLINE-ONLY BONUS: WHERE DID THE NAME BLACK FRIDAY ORIGINATE?Black Friday means the day retailers historically go from a loss or being in the red to a profit or being in the black, right?

Not so fast. Multiple sources say historians indicate it originated in Philadelphia in the 1960s, around 1966, when throngs of shoppers and tourists would descend on the city on the day between Thanksgiving and the Army-Navy football game.

The Philadelphia police took to calling the day Black Friday because officers had to work long hours and deal with bad traffic, bad weather and other crowd-related miseries.

According to the New York Times, retailers tried to rebrand the holiday “Big Friday.” However, when that didn’t catch on, they reclaimed the name Black Friday, saying that the holiday was when stores went from red to the black.

Three artificial canines in Christmas attire await a human to buy them at the Kingsport Big Lots Thanksgiving morning. Big Lots was among a sm…

What was Kingsport's Black Friday like in a pandemic?

KINGSPORT — Oh what a difference a year and a pandemic can make.

KINGSPORT — Black Friday 2020 in some ways will be a throwback to the early 2000s since not much in-person shopping will occur Thursday, break…

Few retailers were open Thanksgiving day, although Big Lots in Kingsport and some other retailers across the region were, along with some restaurants, convenience stores and grocery stores.

Watch now: Black Friday 2021 in Kingsport, Bristol not what it used to be