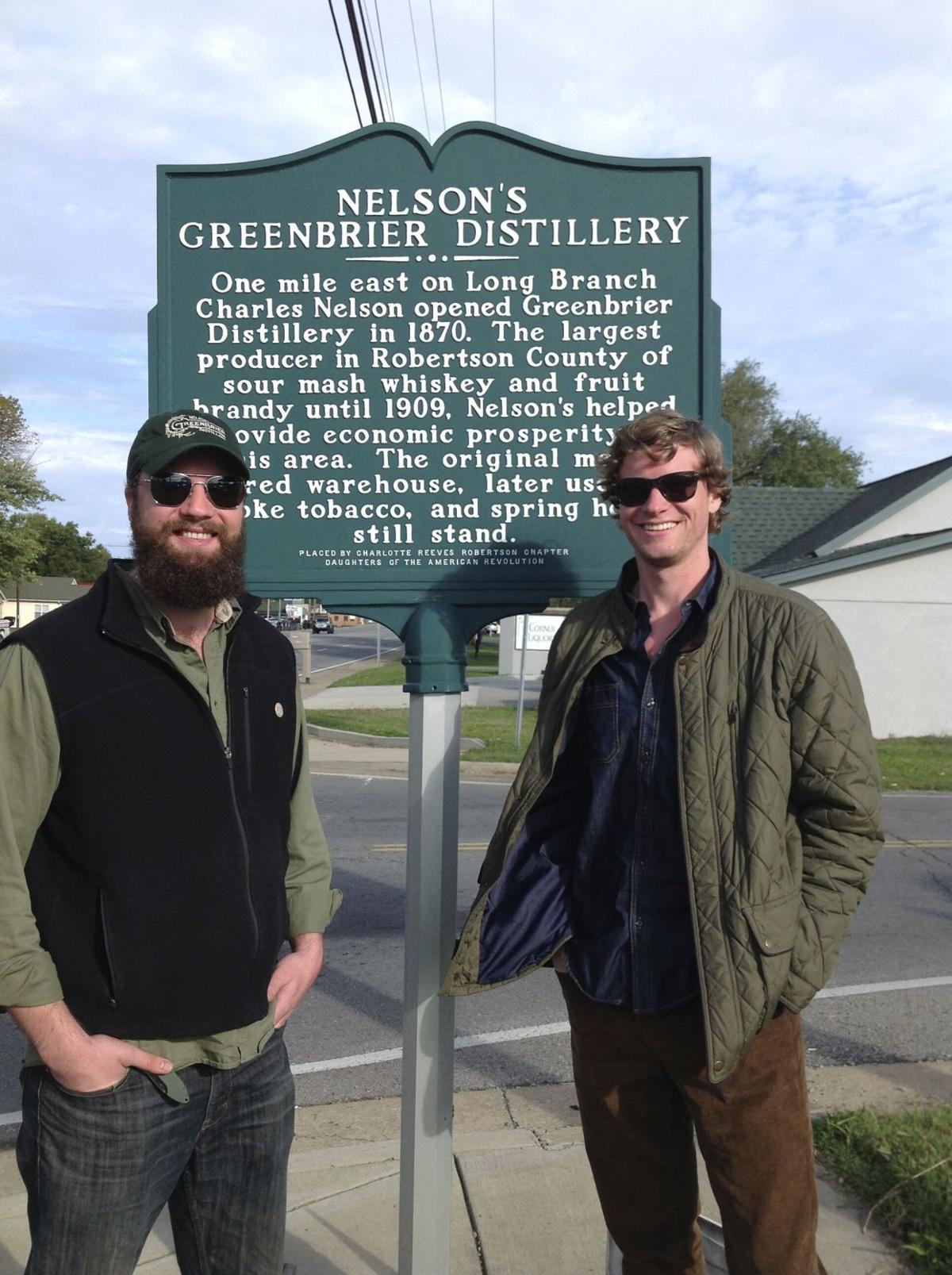 Charlie and Andy Nelson at the historic marker that they found in 2006 that introduced them to the history of their Great Great Great Grandfather's distillery, and changed the course of their lives. 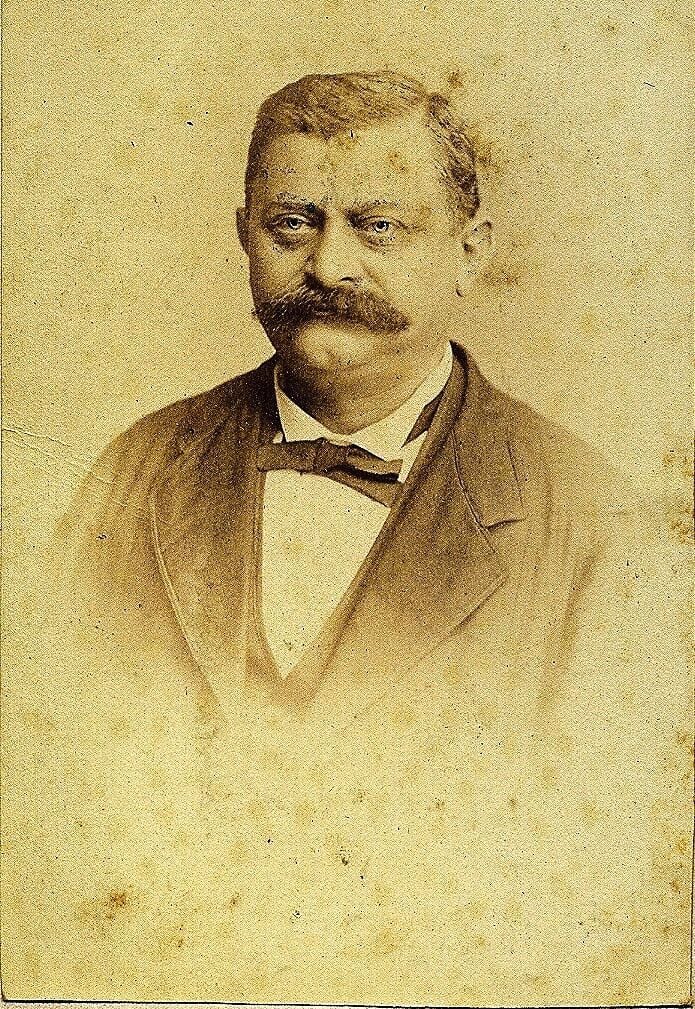 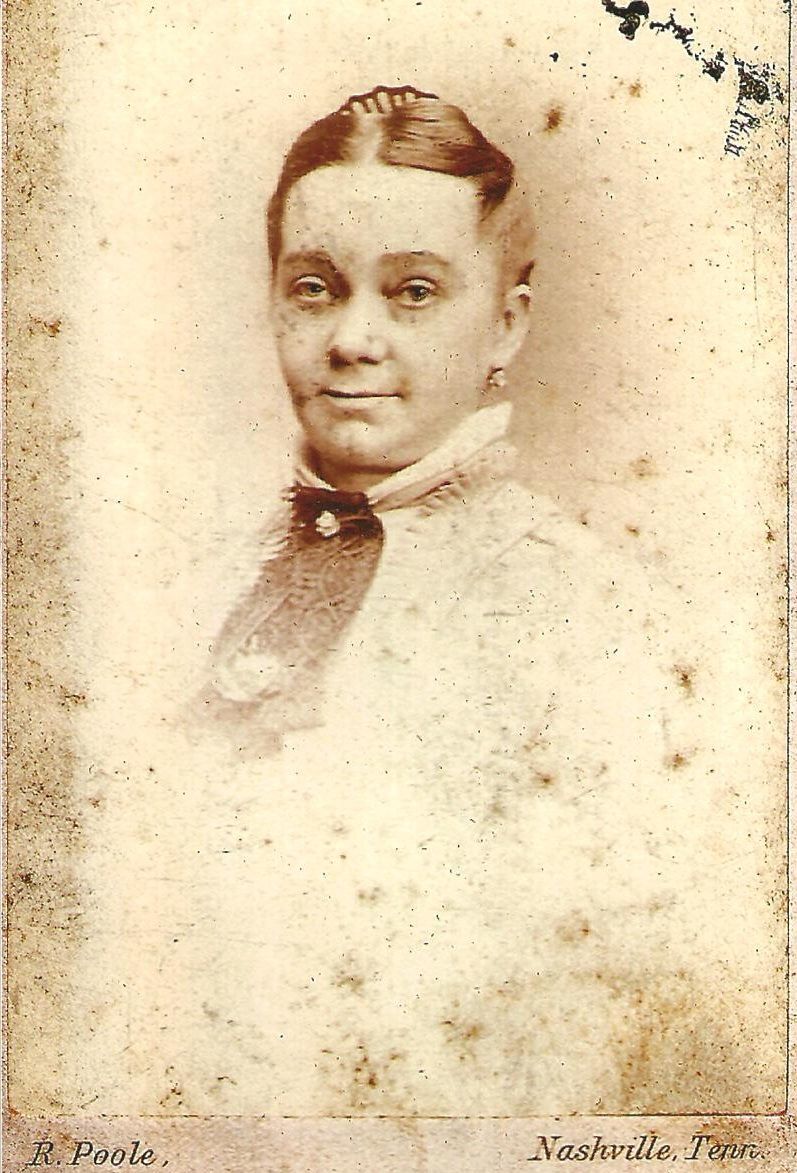 Louisa Nelson, wife of Charles, who ran the distillery for 18 years after his death. Charlie and Andy named their first distillery after her: The Miss Louisa. 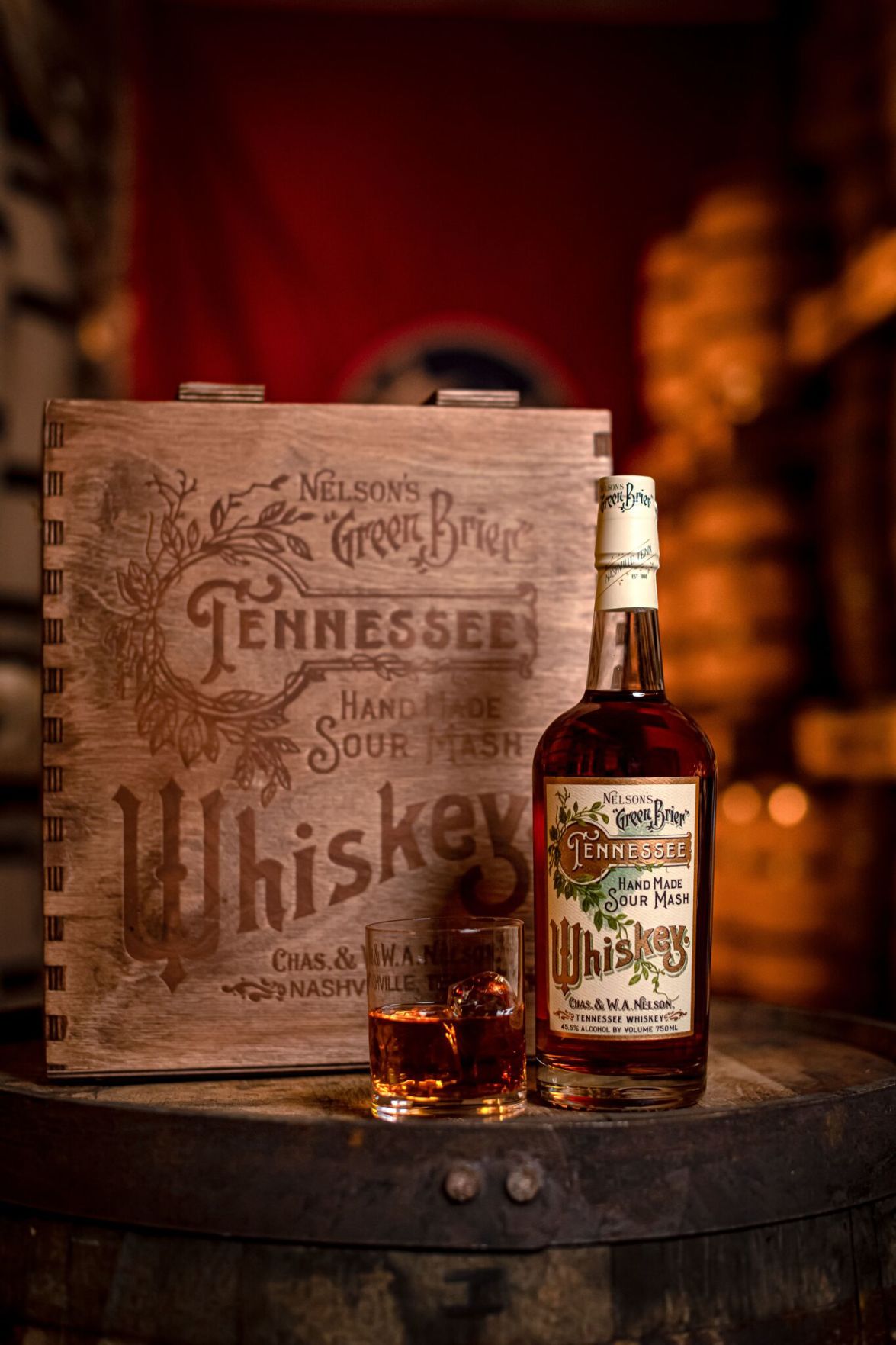 Neslon's Green Brier Tennessee Whiskey. The 2020 version s exactly the same as the 1880 version, same recipe and even the same label. As of March 1 it was available for sale in the Tri-Cities for the first time since Tennessee Prohibition shut down the distillery in 1909. 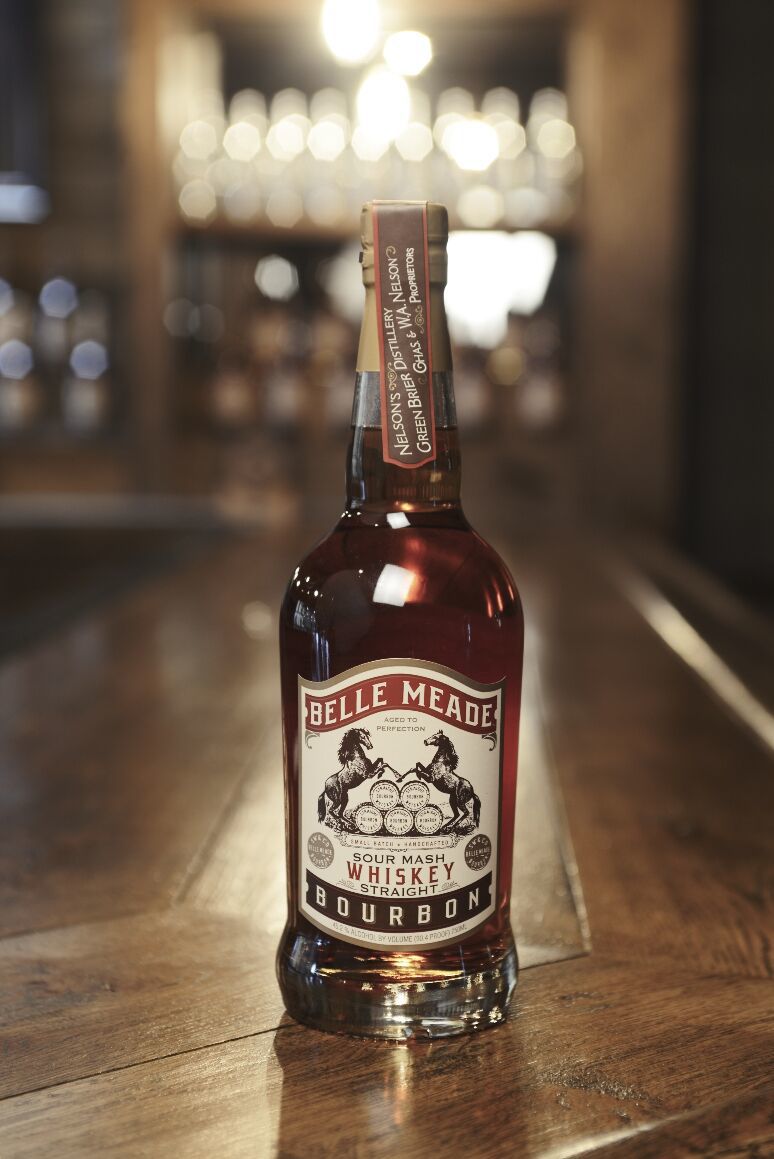 Belle Meade was the first of their GreatX3 Grandfather's recipes that Charlie and Andy Nelson resurrected. They started sellin git in 2012. 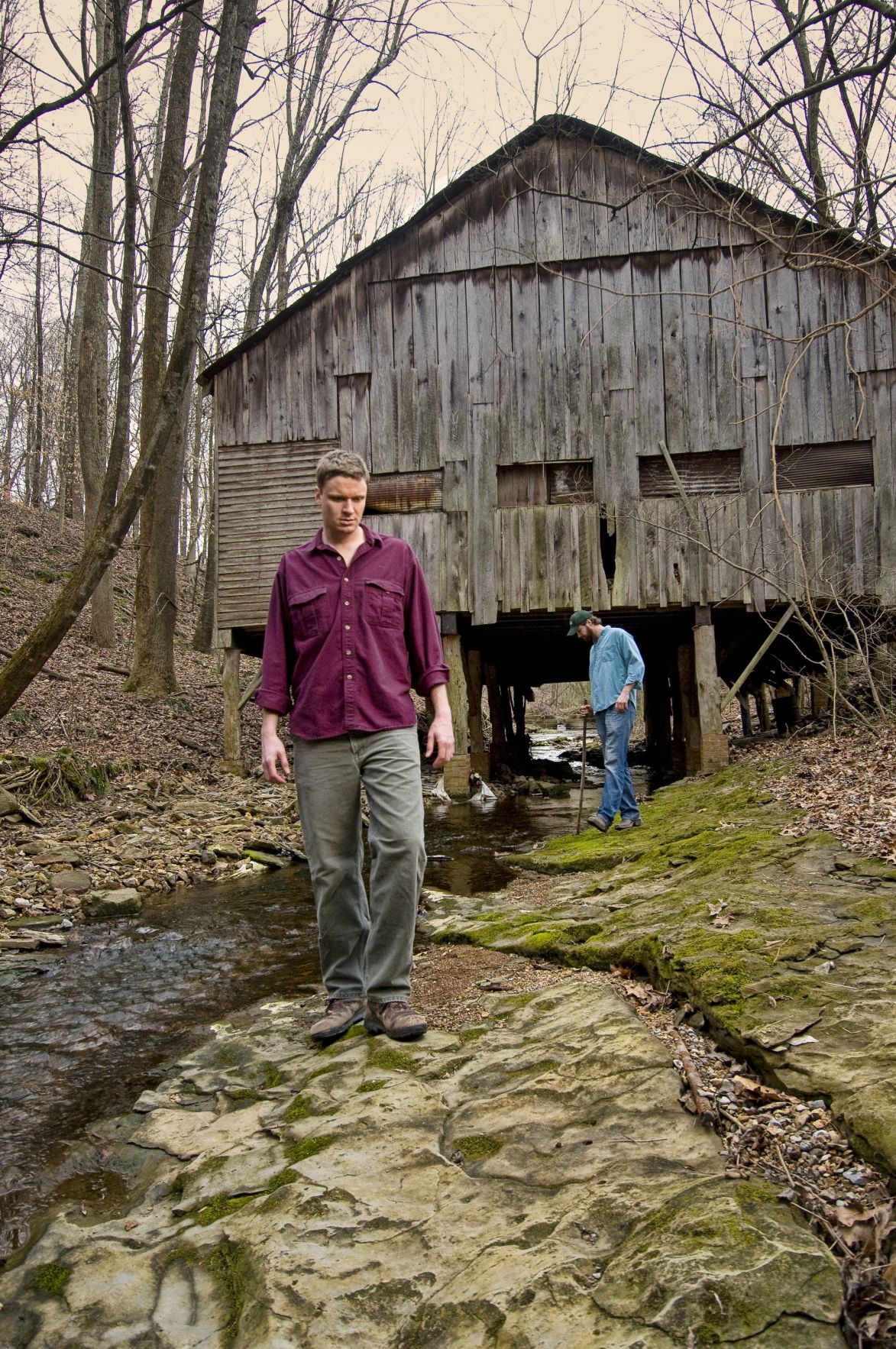 Part of the Original Distillery and spring. 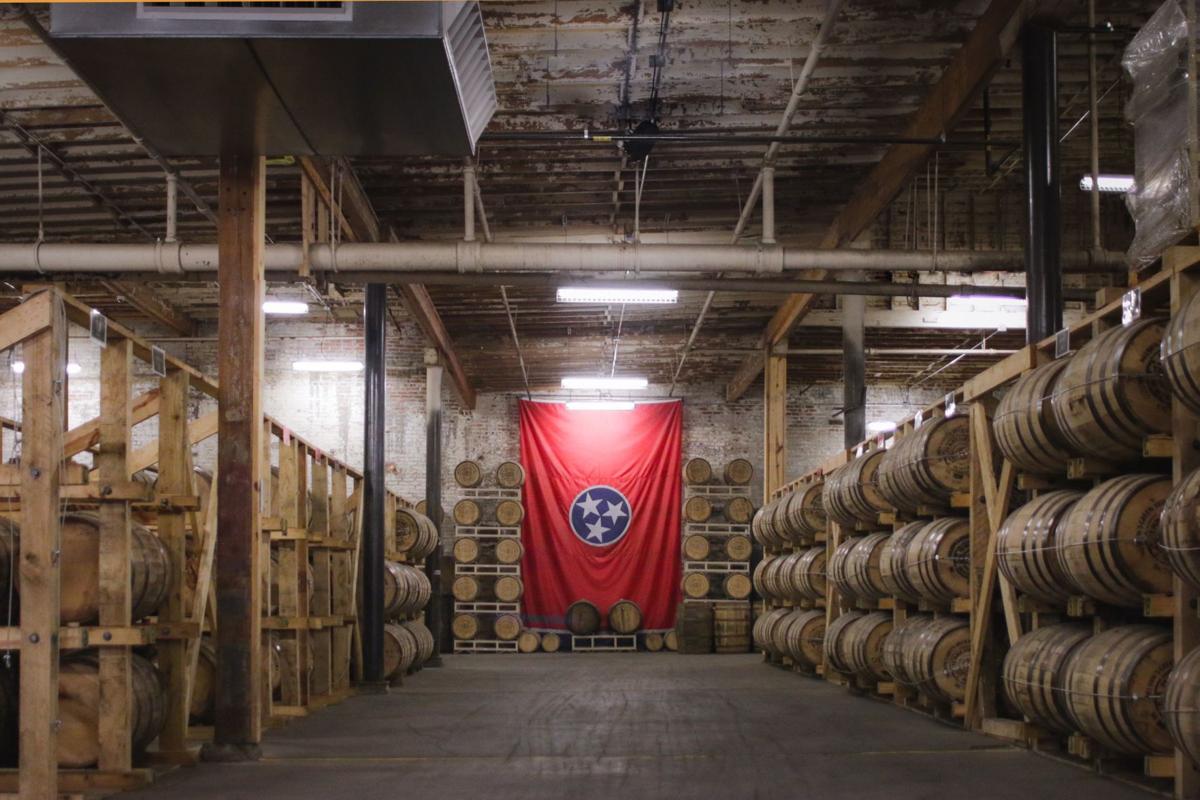 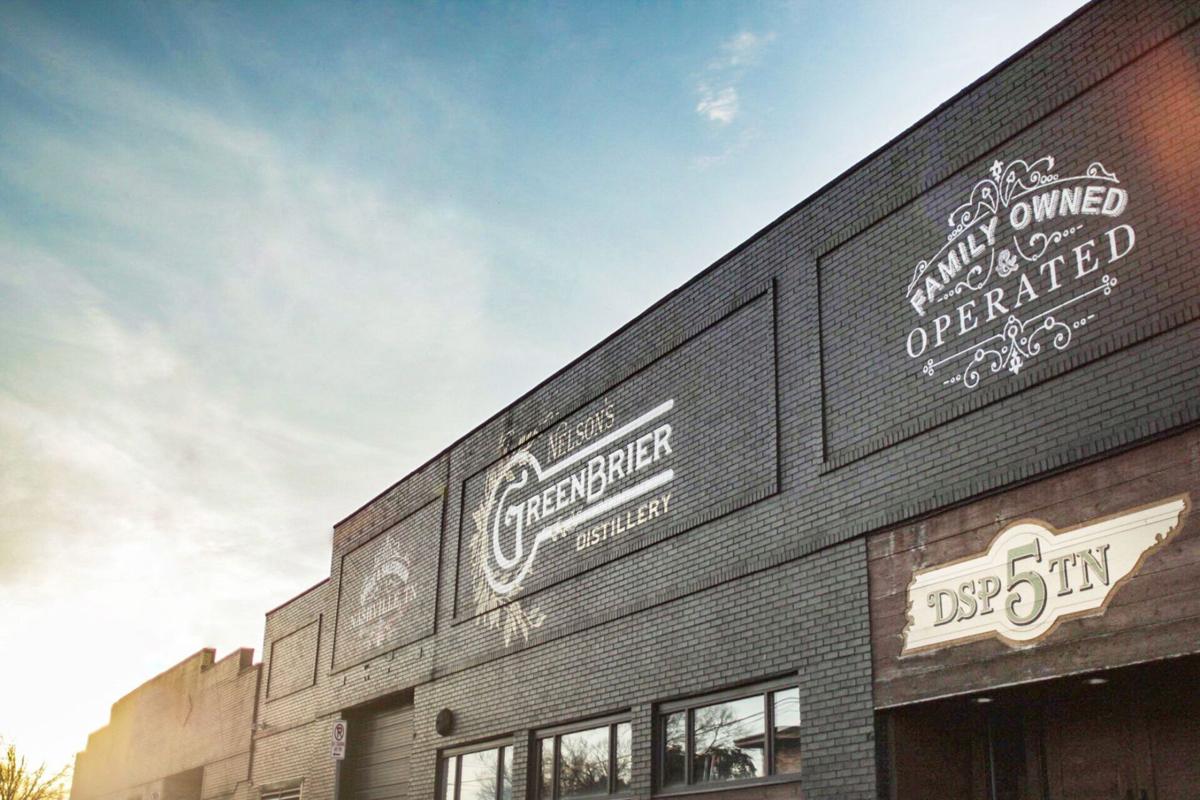 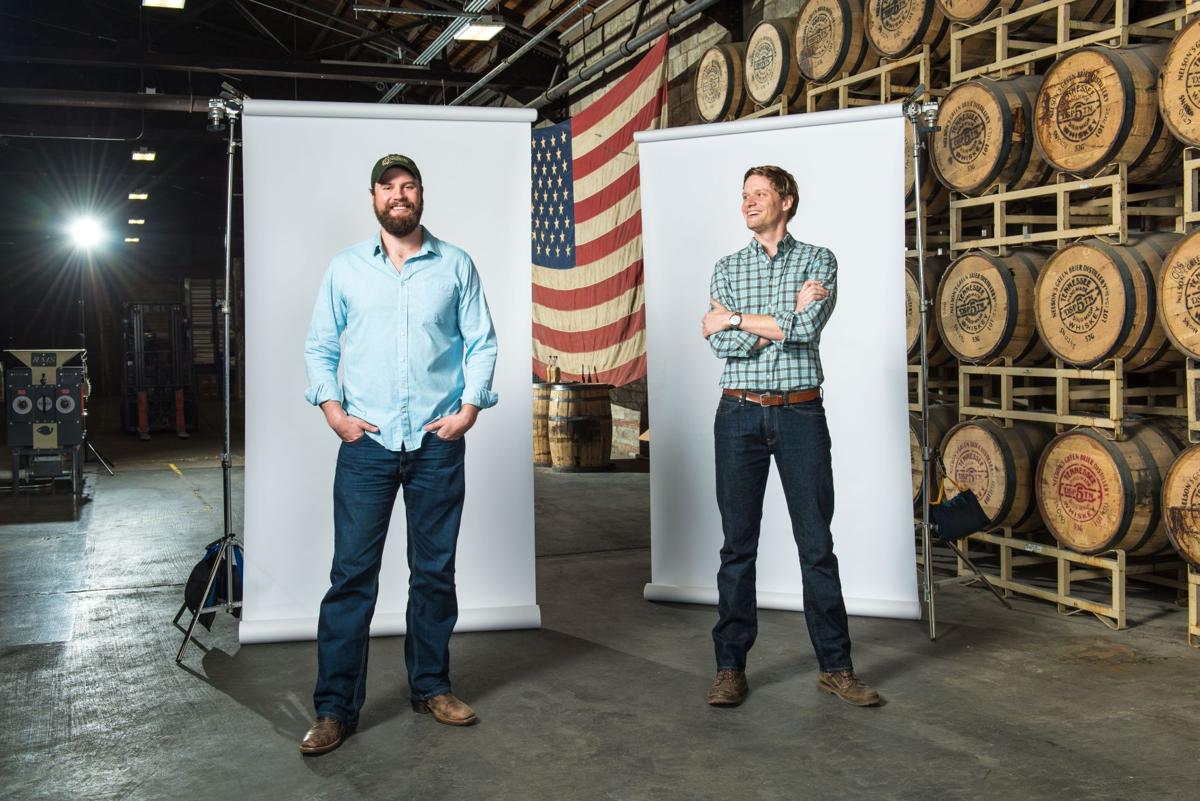 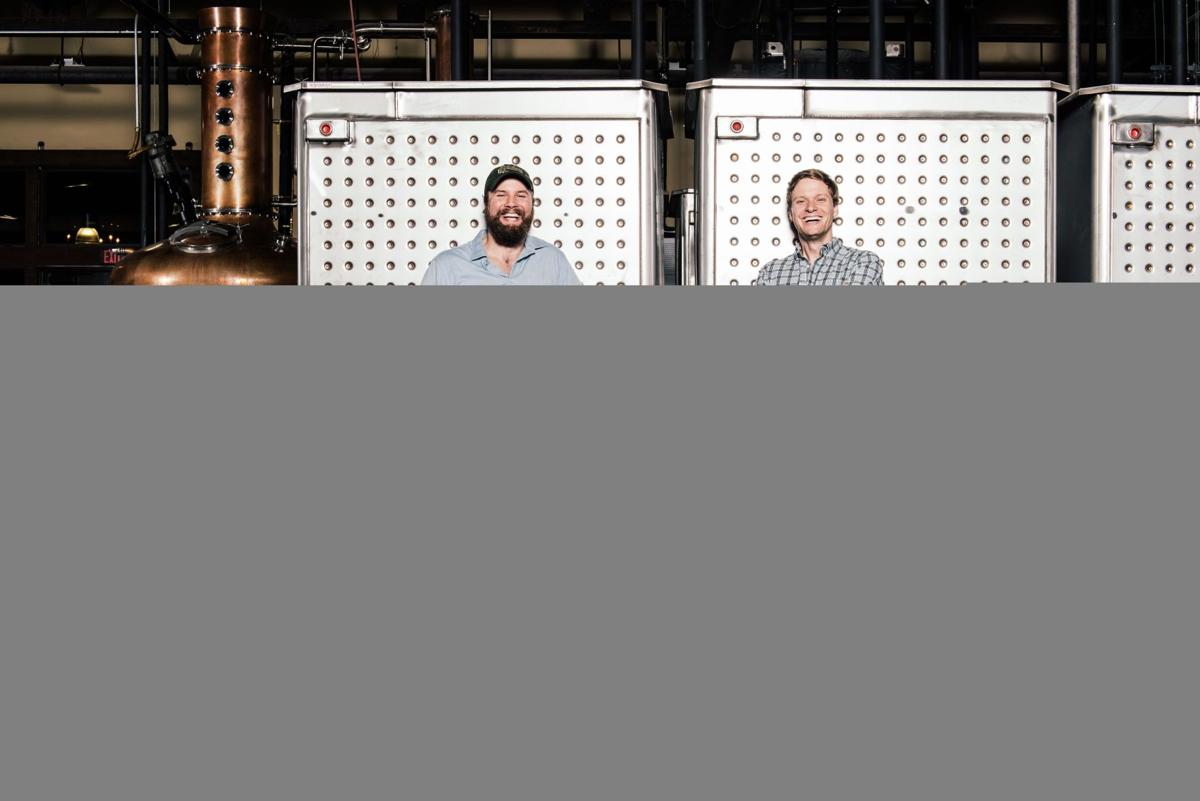 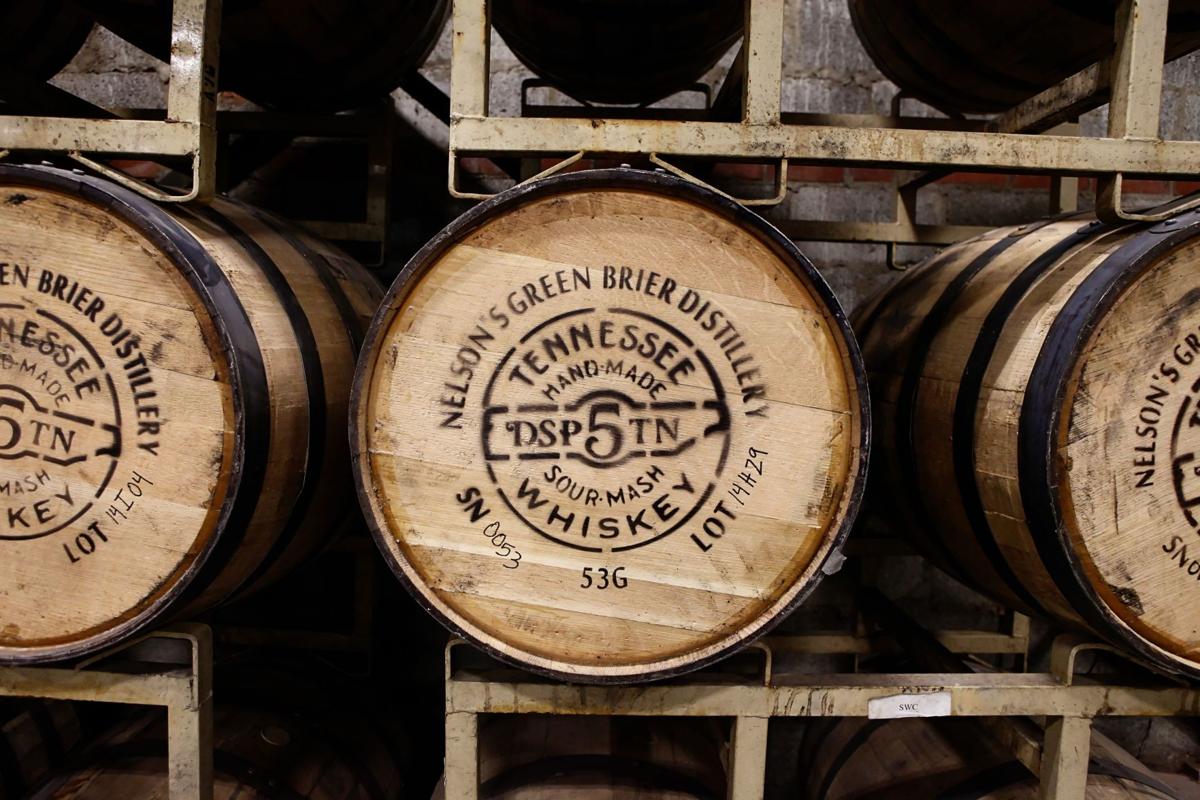 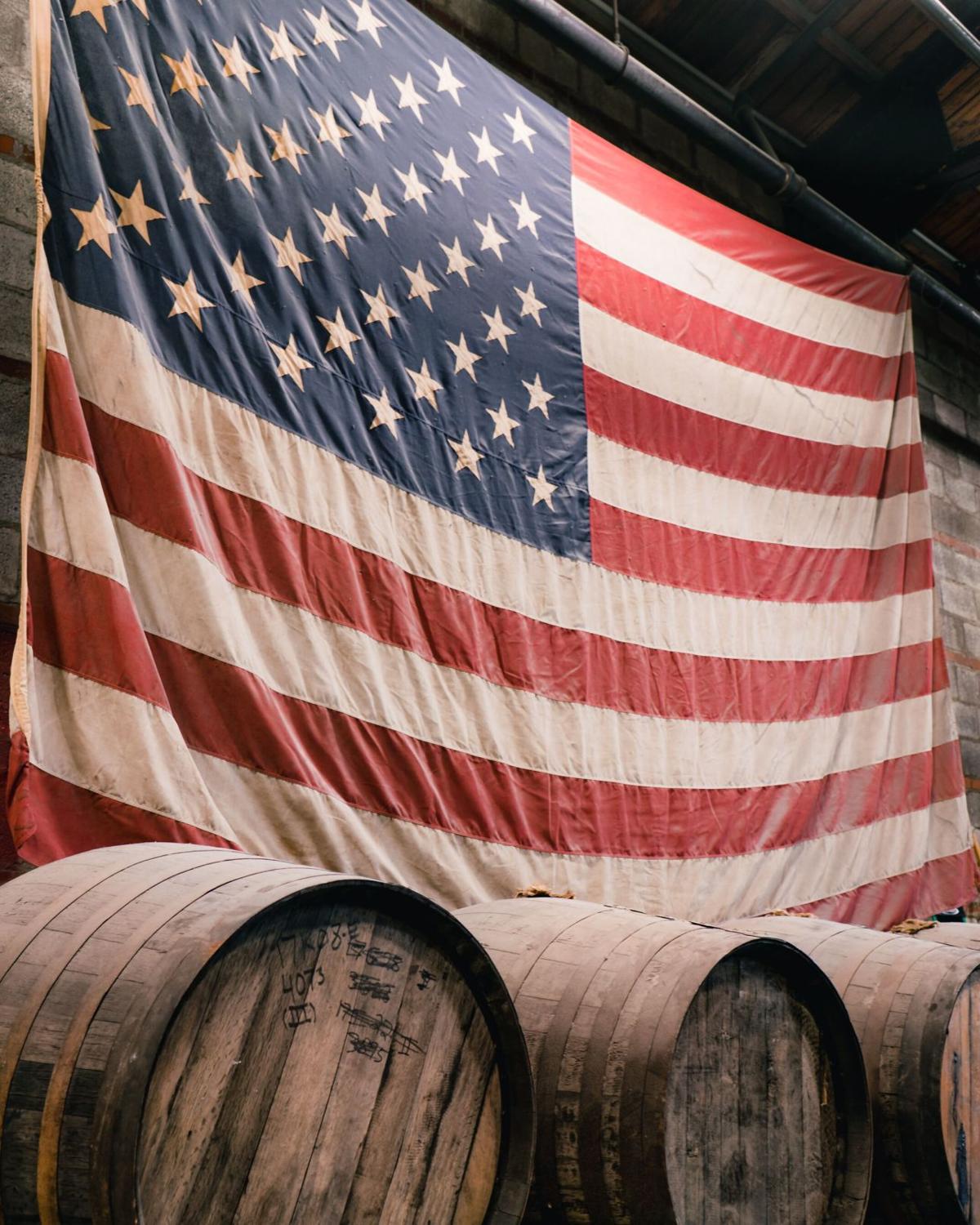 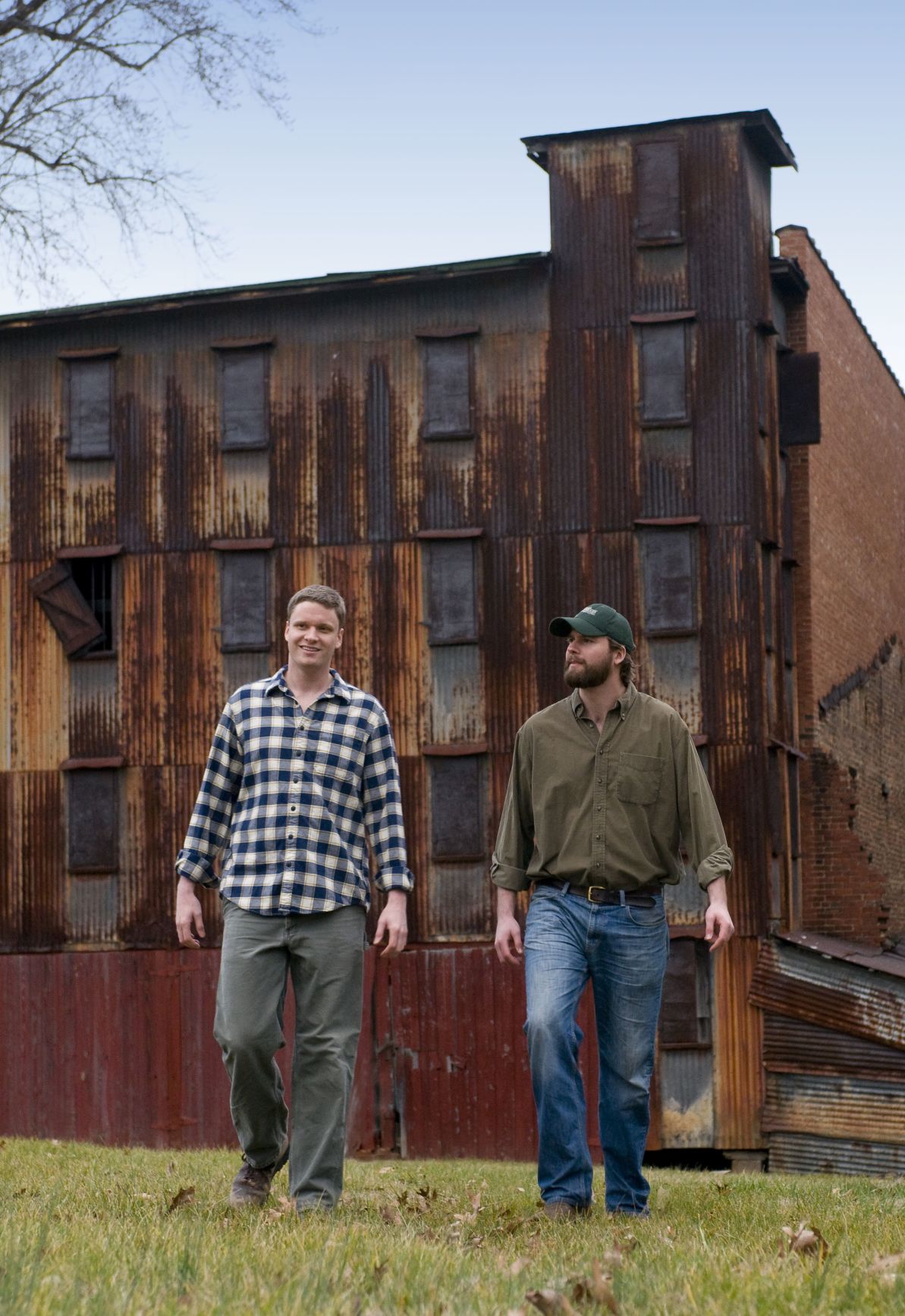 Charlie and Andy in front of original distillery in Greenbrier.

Charlie and Andy Nelson at the historic marker that they found in 2006 that introduced them to the history of their Great Great Great Grandfather's distillery, and changed the course of their lives.

Louisa Nelson, wife of Charles, who ran the distillery for 18 years after his death. Charlie and Andy named their first distillery after her: The Miss Louisa.

Neslon's Green Brier Tennessee Whiskey. The 2020 version s exactly the same as the 1880 version, same recipe and even the same label. As of March 1 it was available for sale in the Tri-Cities for the first time since Tennessee Prohibition shut down the distillery in 1909.

Belle Meade was the first of their GreatX3 Grandfather's recipes that Charlie and Andy Nelson resurrected. They started sellin git in 2012.

Part of the Original Distillery and spring.

Charlie and Andy in front of original distillery in Greenbrier.

Throughout the late 1800s and into the first decade of the 20th century, Nelson’s Greenbrier Distillery in Nashville was the top-selling distillery in the state and among the top sellers in the nation, producing 30 brands including the original Tennessee Whiskey.

But when Tennessee decided to get a 10-year head start on national Prohibition in 1909, Nelson’s was forced to shut its doors after nearly four decades of operation.

That discovery lit a fire under the bothers, who became determined to resurrect their ancestor’s whiskey.

Through painstaking research, Charlie found the recipes to his ancestor’s two most popular brands — Belle Meade Bourbon and Nelson’s Greenbrier Tennessee Whiskey — in a location where you wouldn’t expect to find such well guarded secrets: 19th century newspaper clippings.

The clippings were accounts of a company picnic and tour where the head distiller walked an audience through the distillation process, including exact amounts of each ingredient and every detail of the operation.

The resurrection of the Charles Nelson Distillery a century after it shut down might seem improbable. But the story of how the original Nelson’s Greenbrier Distillery came to be 150 years ago is even more improbable.

The history of the original distillery

Charles Nelson was born on July 4, 1835 in Germany. His father owned a soap and candle factory, and in 1850 he decided to move his family to America.

He sold the factory and converted all the family wealth into gold, which he kept on his person in specially made clothes.

Nelson along with his parents and five siblings, boarded a ship and set sail for New York. While in transit, the ship was damaged in a storm and began to take on water and slowly sink.

A nearby ship came to rescue the passengers, but Nelson’s father was lost when a safety boat ferrying passengers to the rescue ship capsized. His father sank to the bottom of the ocean with the family’s gold.

Luckily the rest of the family survived the voyage. Upon their arrival in New York with nothing but the clothes on their backs, Nelson was the man of the house at the age of 15 and took up what he knew best, making candles and soap.

Two years later, he moved to Cincinnati to work as a butcher and learned about the liquor business because the pigs he was butchering were fed with mash from a nearby distillery.

Shortly before the start of the Civil War, he moved to Nashville and started a wholesale grocery business where his three best-selling products were coffee, meat and whiskey.

“His coffee was delivered by a guy named Joel Cheek, who ended up taking that blend a few blocks away to the Maxwell House Hotel, which became a pretty popular brand of coffee,” Charlie told the Times News. “His butcher was apparently a guy named Mr. Hill who went on to start his own food business: H.G. Hill Food Stores. And Charles, he was just bottling whiskey at the time. He was one of the first to bottle and sell whiskey rather than selling it by the barrel or jug, and he realized that the demand for his whiskey far exceeded the supply.”

Charlie added, “So he bought the distillery that was distilling his whiskey, and a patent for improved distillation, and he greatly expanded the distillery. It became one of the largest distilleries in the country, and by far the largest in Tennessee.”

The distillery was known as “Old No. 5” because it was registered distillery No. 5, which the federal government recognized and gave a historic designation of DSP TN 5 (Distilled Spirit Plant).

“He produced the original Tennessee whiskey,” Charlie said. “That was Nelson’s Greenbrier Tennessee Whiskey. We’re using that original label, original recipe, and everything. And that was one of the largest and most popular brands in the country prior to Prohibition.

“He produced about 30 different labels. He had multiple Tennessee whiskeys, bourbons, corn whiskeys, rye whiskeys, malt whiskey, some brandies. Belle Meade’s Bourbon was another brand that he produced in conjunction with another company.”

In 1885, Nelson was selling about 380,000 gallons per year, which is equal to nearly two million bottles. Just prior to Tennessee Prohibition, which occurred in 1909, Nelson whiskey was being sold as far away as Paris, Spain, and even in the Philippines.

Nelson died in 1891 and his wife, Louisa, took over the business for its final 18 years. She was one of only a few women to run a distillery in the 19th century.

In her honor, Charlie and Andy named their new distillery after her, the “Miss Louisa.”

Charlie and Andy stumble upon the family business

Fast-forward 97 years. Charlie and Andy learn about their family distillery by chance, and right out of college launch this rebirth of the original Tennessee Whiskey.

“Growing up I didn’t know much about the distillery,” Charlie said. “I just knew the story of my family coming over from Germany and the gold. I didn’t even fully believe that until a lady sent me and my brother an article from the New York Herald talking about the journey over and it turns out it was actually true.”

In 2006, their dad partnered with three of his buddies to buy a cow for the meat from a butcher, and he invited Charlie and Andy to go with him to pick up their quarter of the cow.

On the way, they stopped at a gas station to fill up and noticed a historical marker that said, “Nelson’s Greenbrier Distillery, one mile east on Long Branch Road. Charles Nelson opened the Greenbrier distillery in 1870. ...”

“At first I thought it (the same name) might have been a coincidence,” Charlie said. “I’ve got a huge family in Middle Tennessee. But then we go on to the butcher and ask him if he knew anything about the distillery, and he shows us across the street the old barrel warehouse that’s still standing, the spring is still running, and we drank from the spring. Then he sent us to a nearby historical society where they had two original bottles with my name on them. At that point I can’t say that I knew for sure, but I knew.”

Charlie added, “Every hair on my body stood up. My brother and I looked at each other, and we’re like, ‘Man, this is what we were meant to do,’ and we’ve been working on resurrecting the company ever since.”

The original Tennessee Whiskey is back

Starting out, they couldn’t afford to buy all the equipment and build a distillery, so the Nelson family literally put up everything they owned to contract with another distillery to begin producing the original Belle Meade Bourbon recipe, which they began to sell in select markets in 2012.

Beginning this year, Belle Meade will be distributed nationally.

Eventually they raised enough money to build their own distillery and began making the original recipe of Nelson’s Greenbrier Tennessee Whiskey.

They opened the doors of their distillery to the public in 2014 just outside downtown Nashville in the Marathon Village area and began selling bottles of the original Tennessee Whiskey, with the original label design, on Oct. 1, 2019, in Middle Tennessee.

What’s the difference between Tennessee Whiskey and Belle Meade?

“Belle Meade is a high rye content bourbon and it’s aged a little bit longer as well. It’s gonna have a little bit more spice to it. You’ll get a little more of that peppery rye spice, but you also get some of those nice vanilla, caramel confectionery notes. It’s really balanced, and I think, a really beautiful product.

How many bottles can you produce in a year?

“Not enough,” Charlie said. “I don’t even know off the top of my head, but we’re selling just about everything that we can produce. But, to put that in perspective, in a year we sell probably less than what some of the big distilleries spill in a day. But we have grand plans and we're growing.”

Charlie added, “My brother and I we’re incredibly proud. It’s been a long time coming. I kind of joke that it’s only taken us about 13 years to get to the starting line. But sometimes the best things in life are worth waiting for.”