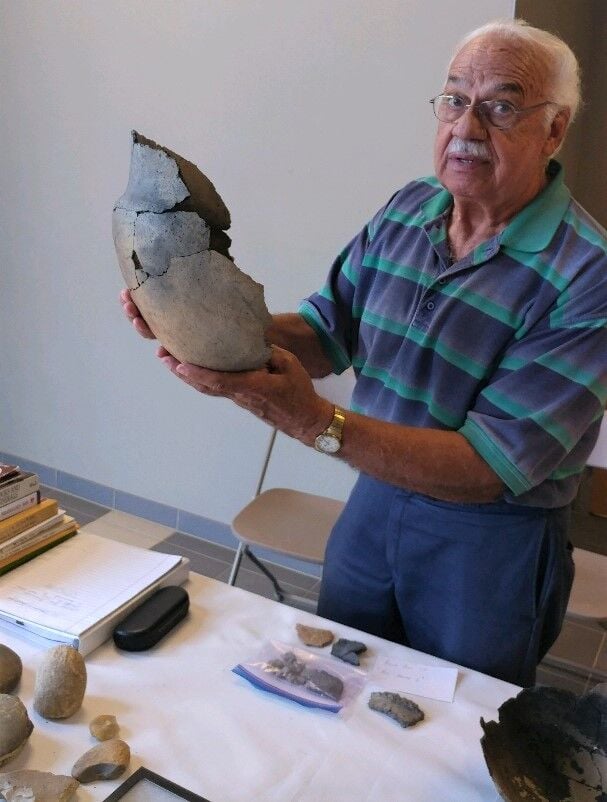 Above, S.D. Dean, who was recently honored with a Service Award from East Tennessee State University, excavates a jar vessel at an archaeological site on the Nolichucky River in Greene County, Tennessee. At right, Dean shows off the awards he received from ETSU. 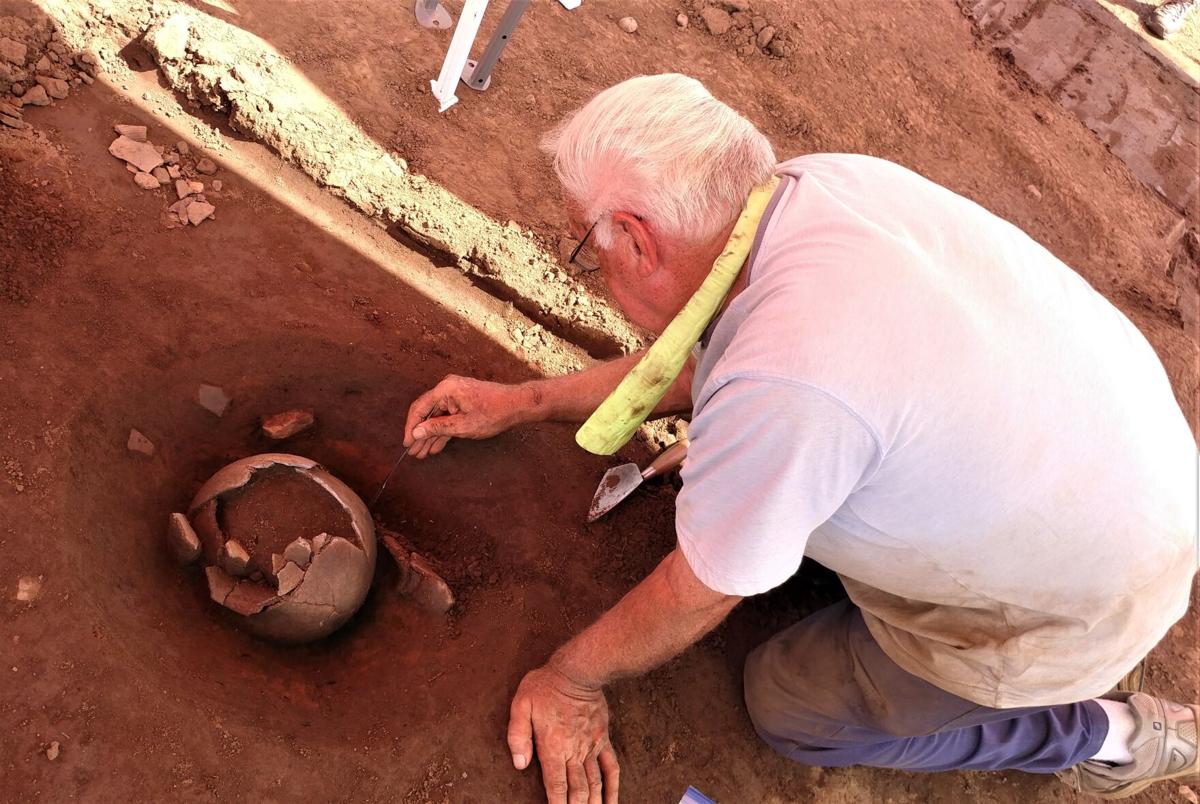 S.D. Dean excavates a jar vessel at an archaeological site on the Nolichucky River in Greene County, Tennessee. 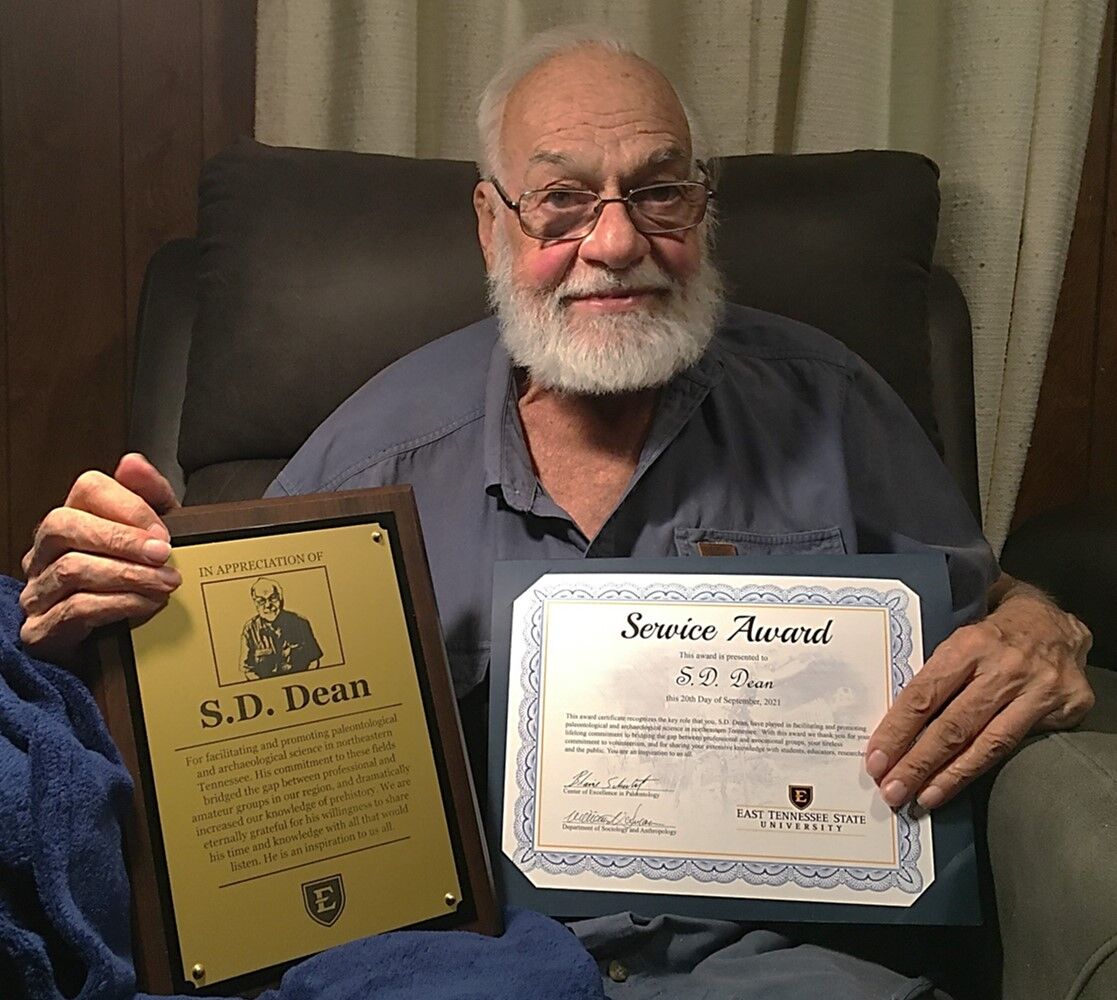 Above, S.D. Dean, who was recently honored with a Service Award from East Tennessee State University, excavates a jar vessel at an archaeological site on the Nolichucky River in Greene County, Tennessee. At right, Dean shows off the awards he received from ETSU.

S.D. Dean excavates a jar vessel at an archaeological site on the Nolichucky River in Greene County, Tennessee.

In September, educator S.D. Dean was honored with a Service Award from East Tennessee State University to commemorate a lifetime of contributions to scientific discovery and public outreach.

The award was presented by Dr. Blaine Schubert, executive director of the ETSU Center of Excellence in Paleontology, and Dr. William Duncan, chair of the ETSU Department of Sociology and Anthropology. The event at the Gray Fossil Site and Museum was also attended, in person and virtually, by other ETSU staff, faculty, students and colleagues.

Sied David “S.D.” Dean, born in Kingsport, has spent decades exploring the deep history of Northeast Tennessee, discovering ancient human artifacts and Ice Age fossils. Although he is not a professional scientist, his work has been essential to scientific understanding of this region.

Over the years, Dean’s efforts have been foundational to the discovery of important sites, the publication of research, and the academic exploration of the area by major institutions, including the Carnegie Museum of Natural History, the Smithsonian, the University of Tennessee-Knoxville and ETSU. Dean was also involved in the early protection of the Gray Fossil Site, now among the most significant paleontological resources in the state.

“S.D. has been a major source of knowledge for both the paleontology and archaeology record of the area, especially in Sullivan County, Tennessee, where he grew up and currently resides,” says Reagan Cornett, archaeology lab manager at ETSU. “S.D. has spent much of his life exploring the fields, streams, woods, mountains and caves of the area. What is most important is that his methods were scientific, keeping the integrity of the sites intact.”

“I started out collecting in my mom’s garden when I was just a kid,” Dean explains. “I never did it for any kind of money, but I was able to work with professional people in different fields — in geology, in anthropology and in paleontology.”

Dean says that his early experience learning proper methods from professionals really got him going in the right direction. “I always did it in a professional manner, then if professional people got involved, they knew exactly what I was doing,” he says. “So, we were able to do professional papers and even get some books written.”

In addition to scientific discovery, Dean has also been a major force for education, participating as a volunteer in educational programming at the Gray Fossil Site and Museum, including Archaeology Day and Fossil and Artifact ID Nights, where he shares his knowledge and appreciation of ancient history with the public.

“I think that S.D. has been one of the biggest local boosters of the importance of the past,” says Dr. Chris Widga, head curator at the Gray Fossil Site and Museum. “He recognized that engaging the public in history didn’t stop with, well, history. It also includes rocks, fossils, arrowheads and pottery fragments.”

“So much of our work at the museum depends on dedicated volunteers,” says Schubert, “and S.D.’s work has been quite significant because of his expansive knowledge and experience in the realm of paleontological and archaeological discovery in northeastern Tennessee.”

Dean has also served as a mentor for ETSU students, and several undergraduate and graduate student projects and theses have been based on Dean’s discoveries. Recently, Dean donated a lifetime collection of artifacts, records and research to ETSU facilities, which will surely contribute to even more student and faculty research in the future.

The Service Award is not the first such accolade Dean has earned for his extraordinary work. In 2006, he was presented with a Lifetime Achievement Award from the Tennessee Council for Professional Archaeologists.

Dean himself is humbled that “after all these years, somebody would even recognize what I’d done,” and that these numerous scientists would “take the time to say, ‘That’s something we need to recognize.’”

Looking to the future of archaeology in the region, Dean says, “People have to keep pushing it forward — that’s how it moves. Hopefully I moved the needle forward a little bit, and maybe now students or whoever’s coming into the field will keep adding to that knowledge. The next person can grab the needle and keep going.”